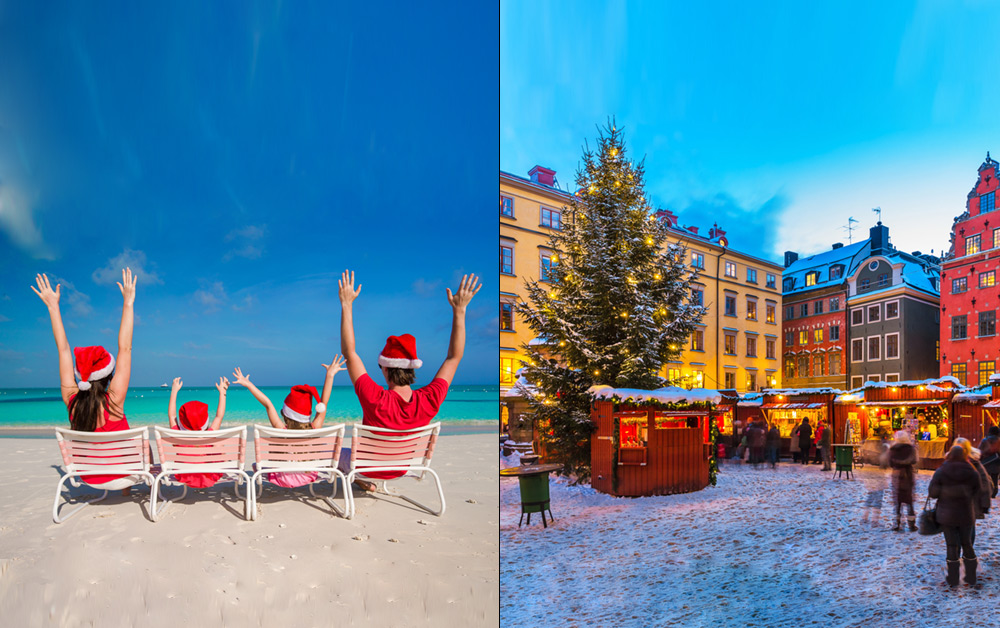 5 Festive Destinations to Celebrate the Merry Season (and 5 That Are Really Sunbathing Haven) — Sun or Snow for Your Year End Vacation?

As the holiday season is around the corner, and Christmas bells start ringing, people around begin to celebrate the end of the past year and usher in a new one.

With all the festivities happening around the globe, here are 5 cities that explode with color and merriment and another 5 that are bathed in sunshine and joy.

The Big Apple, widely known as the city that never sleeps, the economic powerhouse that is New York City draws in tens of millions of tourists every year who marvel at the invigorating bustle and nonstop entertainment.

Particularly busy a period is Christmas and New Year’s. With the legendary Christmas lights and decor at Rockefeller Center and the iconic Times Square Ball Drop on New Year’s Eve, no one does the holidays quite like New York does.

With cobblestone streets and charming shops that fill Québec City, it almost feels like in Europe, especially with its prominent French influence through language, dining, and just about everything.

The Le Grand Marché de Noël, which runs from late November to just after New Year’s, is a prominent feature of the city during the holidays, offering local crafts and tasty treats.

While Christmas may not be the most ubiquitous holiday in Tokyo, the lights are incredible, and as expected from the most populous city in the world, the city gets bustling around this time of the year.

The city also has some of the best shopping districts in the world, offering everything from quirky Japanese designers like Comme des Garçons in Ginza to electronics megastores in Ikebukuro, perfect to do some Christmas shopping.

With a history of over 400 years, the Christkindelsmärik in Strasbourg is one of the oldest in France. Having 12 markets to visit in the city, you’d find an endless series of shops and stalls to check out.

Be sure to get your hands on the bountiful Christmas goodies available, and also don’t forget to buy some foie gras which the region is so famous for.

The Eternal City, Rome, is one of the most historically significant places to have ever existed. So deeply entrenched in culture, history, and food, Rome is one of the best places to visit, period.

While there are amazing Christmas markets located all over the city, perhaps one of the most significant events to happen on Christmas would be when the Solemn Pontifical High Mass is delivered by the Pope in Saint Peter’s Basilica in the Vatican.

On the land down under, things are done kinda differently. To start, their seasons are in reverse, so expect warm sunny weather over Christmas and New Year’s.

Trying to get away from the cold? Sydney would be the perfect location to laze on the world-famous Bondi Beach and get an exotic tan. The city also hosts numerous holiday markets and concerts all over during this festive season.

While Christmas isn’t even a designated holiday in Thailand, the city of angels, Bangkok, plays host to numerous raucous Christmas and New Year’s parties all over.

The city is also known for its delectable food, from the streetside food carts of Yaowarat to fine dining Michelin Starred restaurants. There are also a number of sprawling luxury riverside resorts, including the legendary Mandarin Oriental.

The island paradise of Honolulu is incredibly busy during Christmas and New Year’s, and understandably so with the terrific weather and beautiful beaches.

There are plenty of events happening around this period as well, including the Festival of Lights Boat Parade, where festively elaborate lighted boats drift along the waters. The various fireworks displays are also a must to experience too!

San Juan’s exhaustive list of activities and beautiful weather make it an obvious choice for a getaway destination. It has one of the most stunning coastlines, making it the perfect place for just lazing on the soft pristine sands or to go snorkeling.

Besides being an idyllic beach escape, Old San Juan is adorned with colorful Christmas decor and vibrant lights.

Famed for its boisterous parties and flamboyant parades, Rio de Janeiro is easily one of the most exciting and fun-filled cities in existence. Come Christmas and New Year’s, and it’s even more evident.

Some fantastic features over this period includes the 82-meters tall Lagoa Christmas tree and Reveillon, the New Year’s Eve party that draws millions into the city every year.