10 Must Visit Heritage sites across India

Had enough of mountains and beaches? Make 2020 the year when you strive to take a heritage circuit across India. Not only is India one of the oldest civilizations, but this land also boasts of being the most culturally diverse regions in the world. All these factors make a heritage tour across India a must. Whether you are a history enthusiast or not, here are the top 9 heritage sites you must visit in 2020:

Sanchi is a small town situated near Bhopal (M.P.). The ancient stupas and monasteries have increased the viewership in Sanchi. For people who have faith in God and love sheer craftsmanship, Sanchi is the best destination. Commissioned by Ashoka the Great in 3rd century B.C., the monuments at Sanchi are the oldest Buddhist structures in India.

Sanchi Stupa – a hemispherical brick structure built over the relics of the Great Buddha. The 54 feet high stupa gives insight into the life of Lord Buddha’s, through its mesmerizing carvings, whose intricacy personifies the architecture.

How to reach?: Since it is 40km away from Bhopal, the capital of Madhya Pradesh, the connectivity is excellent. One can take a train or flight to Bhopal and then take a taxi to Sanchi.

Best time to visit: The best time to feel the mystic spirituality in these temples is when winter starts to kick in, which is around October to March.

Located in the small town of Khajuraho, the Khajuraho Temples are a group of temples famous for the embodiment of human imagination, history, architecture, heritage, love, and passion in Madhya Pradesh. It consists of a total of 85 Temples spread across an area of 20 square kilometers. It is divided into three sections, including western, eastern, and southern temples. These temples are dedicated to two religions, namely Hinduism and Jainism. Built by Chandelas, they also reflect acceptance and respect for diverse faiths during those times. These are well known for their Nagara style symbolism and erotic figures and sculptures. The carved statues and sculptures, some of which are the residues of the ancient culture of Kama Sutra. The whole monument is made of sandstone of various colors, giving it an exquisite look. This place has a well-connected railway system, so one can always take a direct or connecting train to this place. 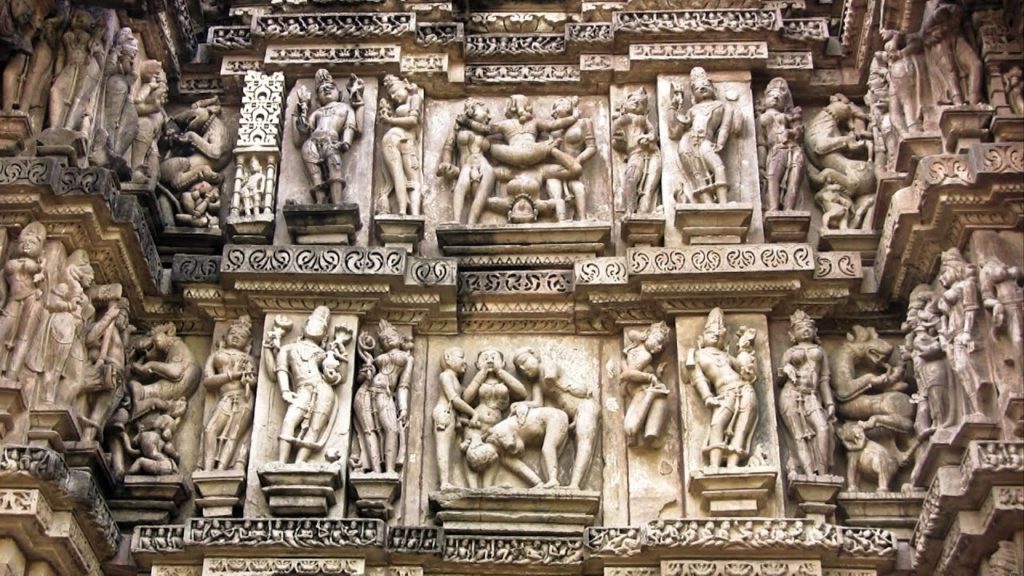 How to reach?: Khajuraho has its railway station and airport, which is well connected to major cities.

Best time to visit: The best time to from October to February, temperature, and breeze is at its best during this time of the year.

Beautifully carved into hillside rock in the middle of nowhere are the Ajanta and Ellora caves in Maharashtra. This famous rock-cut cave is situated in Aurangabad district of Maharashtra. The cave shrines dated back to the 2nd century BC and were created with the hands of the artists of that time. The style of Ajanta art and architecture has had a revolutionary impact on the way in Indian art and architecture has progressed throughout history; one can say that this marks the beginning of Indian Classical Art.
The caves at Ellora were chipped to showcase the three religions – Hinduism, Buddhism, and Jainism. While the 29 caves at Ajanta were carved to describe the story of Buddhism. The best time to visit is when it’s cooler and dry(Nov-March). 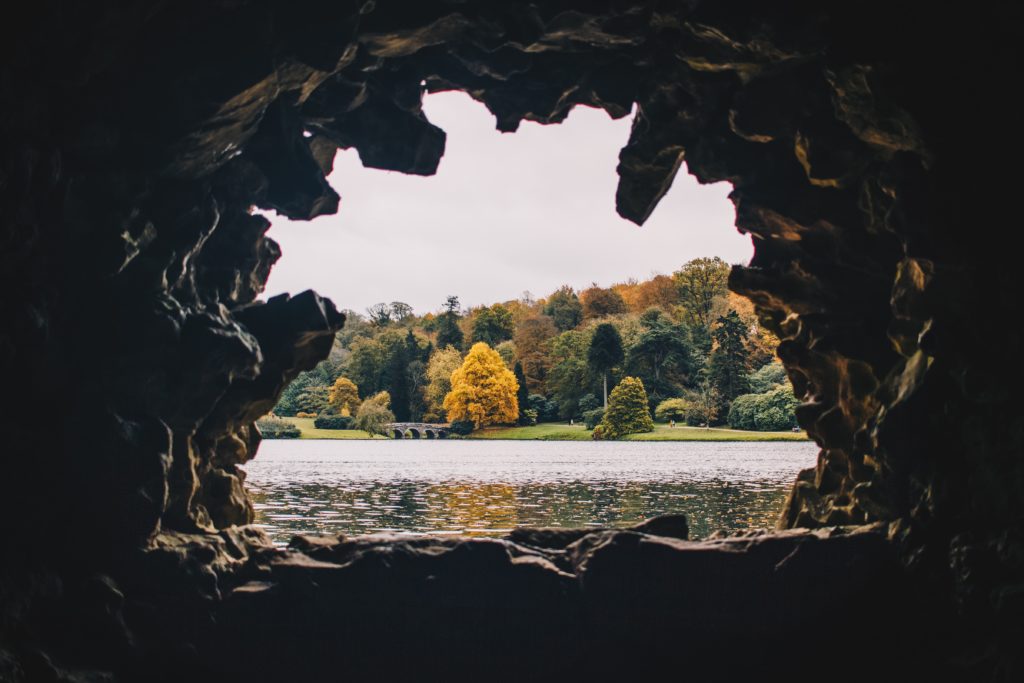 How to reach?: The closest railway stations are in Aurangabad for the Ellora caves and the industrial city of Jalgaon for the Ajanta caves. There’s also an airport in Aurangabad so that one can reach here by air.

The Konark or Konarak Sun temple, also known as Black Pagoda, is dedicated to the Hindu sun god Surya and, conceived as a giant stone chariot with 12 wheels, it is the most famous of the few sun temples built in India. Situated on the bank of the Bay of Bengal, embracing the rays of the glistening sun, the temple at Konarak represents sun god Surya’s chariot. It is located about 35 km northeast of the city of Puri on the coastline in the state of Odisha. The word ‘Konark’ is a combination of two Sanskrit words, Kona (corner or angle) and Arka (the sun). It thus implies that the main deity was the sun god, and the temple was built in an angular format. 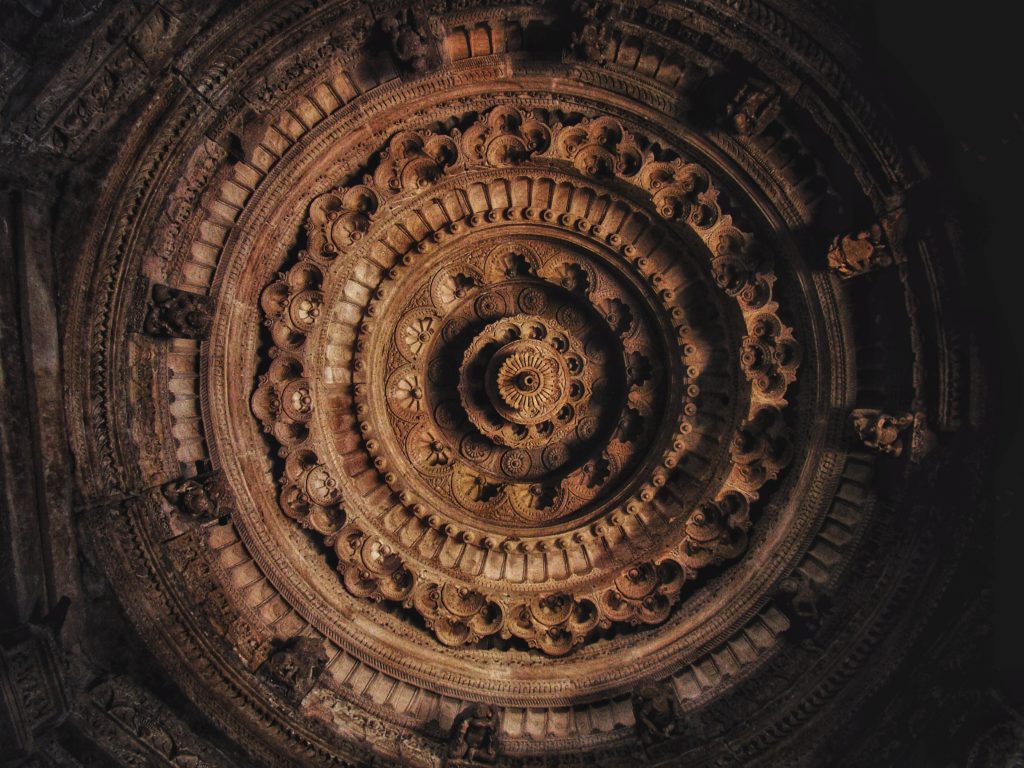 The temple is one of India’s most famous Brahman sanctuaries and portrays the grace, the joy, and the rhythm of Kalinga’s life.
Konark is a famous tourist destination owing to the Sun Temple, and thus it is well-connected to Puri and Bhubaneswar by trains, buses, and taxis. The easiest way, however, to reach Konark is to rent a cab from Puri.

How to reach?: The easiest way, however, to reach Konark is to rent a cab from Puri, which is situated at a distance of 35 km. Puri railway station which is well connected. Though Puri doesn’t have an airport, the Bhubaneswar Airport, which is 53 km away from Puri, helps in connecting the city to other cities of the country.

The city of ruins, as we call it, is a city situated in the hills and valleys of the beautiful state of Karnataka. Hampi was the capital of the Vijayanagar empire, located by the Tungabhadra river. Hampi is called the backpacker’s delight, as the city is filled with numerous ancient monuments, beautiful temples, ruins of palaces, mountains with mesmerizing sunrise and sunset views, street markets filled with the hustle and bustle of people, it’s an open museum if you assume it to be, which gives you 100+ locations to explore. The magnificent craftsmanship of the temples and monuments is the thing that attracts people the most. 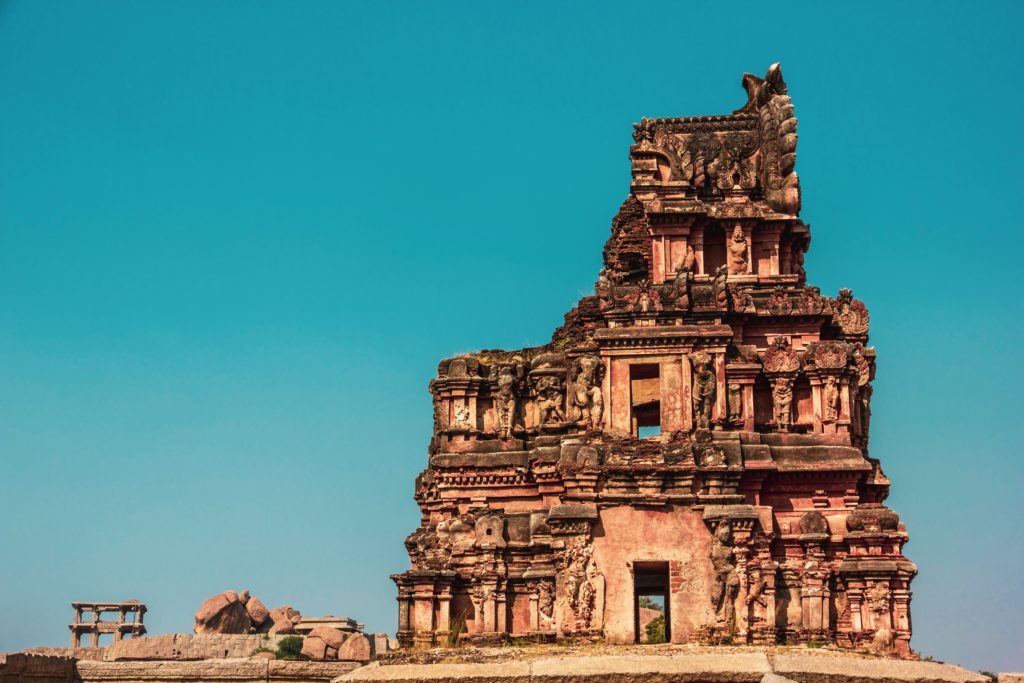 October to March is considered to be the best time to visit this place as the cold and soothing temperature at the time makes it easy to explore the city. You should visit Hampi during November when Vijaya Utsav (Festival of Hampi) celebration takes place, where you can see this place in its full glory.

How to reach?: Hampi does not have an airport. The nearest airport is Belgaum airport, which is located at a distance of 270 km. There is no railway connectivity, but it is well-connected to Bangalore and other major cities of Karnataka via roadways.

Best time to visit: From October to March, when the climate is quite cold and pleasant for outdoor sightseeing.

Mahabalipuram, famously known as Mamallapuram, is situated on the Coromandel Coast along the Bay of Bengal in Tamil Nadu. Once the home of demon king Mahabali, it was later named as Mamallapuram. It dates back to the 7th century, the rock-cut shore architecture and stone carvings display the Pallava art. Shore temple is a mix of 3 temples which are dedicated to Lord Shiva and Lord Vishnu. Out of many temples, a lavish shore temple bordered by Nandi bulls, facing the sea, offers a captivating sight to the visitors. 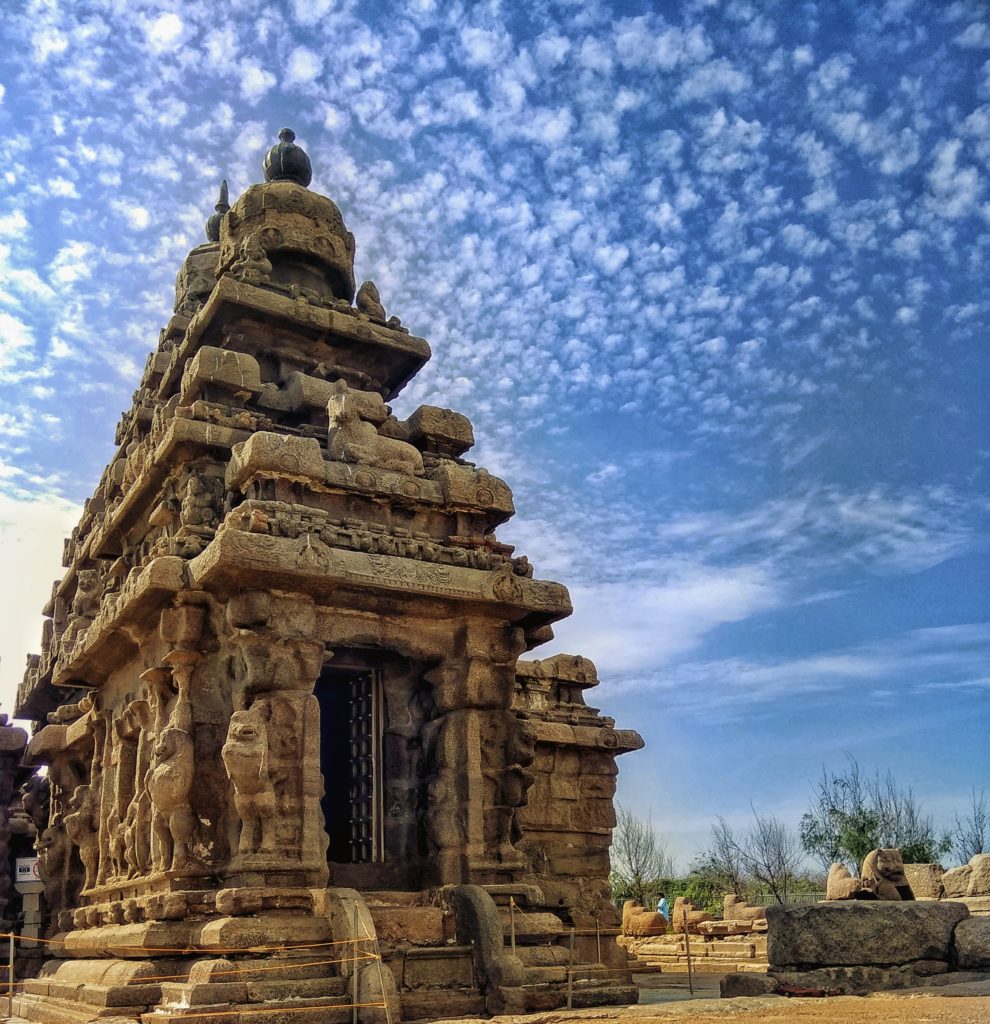 This town of Mahabalipuram is situated approximately 58 kilometers from Chennai; hence this place is well connected; one can always reach Chennai and then take a taxi or public transport to this place.

How to reach?: Chengalpattu (22 km) is the nearest railway station. However, the Chennai railhead (60 km) is the closest major station having direct trains to Mahabalipuram.

Best time to visit: From the winters, from November to February. During this time, days are pleasant while the nights are cold.

Taj Mahal, situated on the south bank of the Yamuna river in the Indian city of Agra, is an ivory-white marble mausoleum. Built by the Mughal Emperor Shah Jahan, it is considered as one of the most beautiful buildings in the world, which was built in the memory of his third wife, Mumtaz. The primary tourist season is from October to March as this wintertime brings warm sunshine, making it an ideal time to visit the Taj Mahal. During summers, it gets a bit uncomfortable because of the scorching heat as it is situated in plains where temperatures could get pretty high. Another time to visit this monument is during the rainy season, as the beautiful weather compliments the love that surrounds the exquisite memorial. 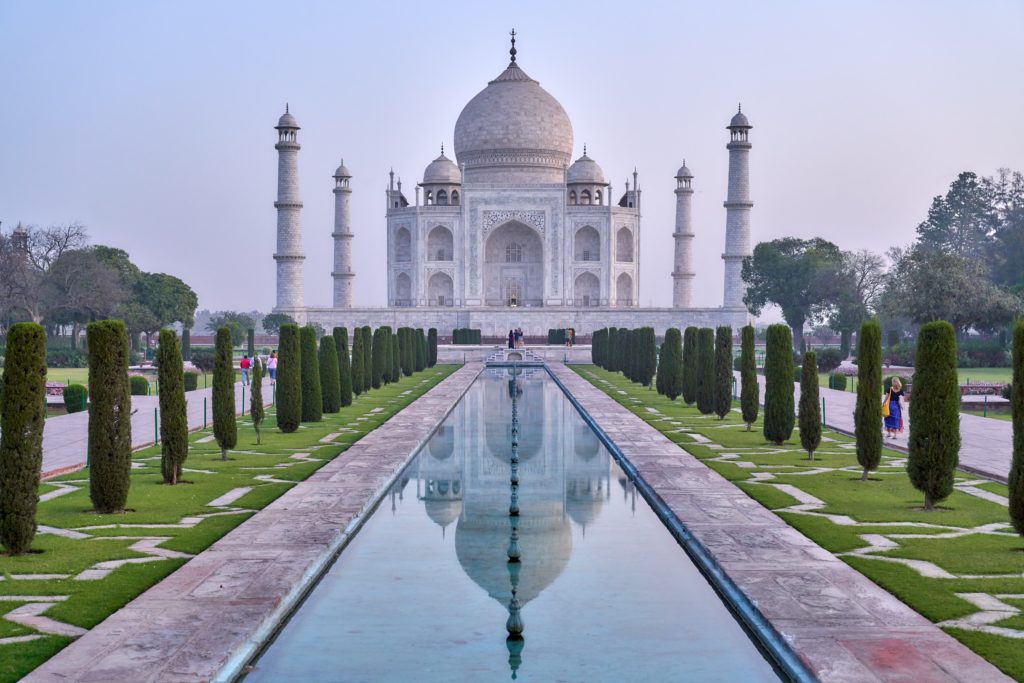 Taj Mahal, under Full Moon Night, is one of the most beautiful things one can experience. Tickets for night viewing of the Taj Mahal are permitted on bookings.

How to reach?: The nearest airports to reach the Taj Mahal are in Agra and Delhi. The Taj Express and Shatabdi offer the best rail connections to Agra.

Qutub Minar was built in 1192 to which marks the advent of Islamic rule in India; the Minar stands as a symbol of victory and power as it’s construction was commenced by Qutub-ud-din-Aibak after he defeated the last Hindu ruler at that time. Qutub Minar is the tallest individual building in the world depicting the Mughal architectural brilliance while visiting Qutub Minar; one can also visit the other several historically significant monuments like Iron Pillar of Delhi, Quwwat-ul-Islam Mosque, Alai Darwaza, Tomb of Iltutmish and other minor monuments. Located in Mehrauli, the minar depicts the rich culture and history of India as various rulers built it by the time.

Recommended Season to Visit is from November to March as the average temperature is around 12 to 13 C, which makes it comfortable to explore the unique monument. The entry fee for an Indian and a foreigner is INR 35 and INR 550, respectively.

Red Fort was the official seat of Mughal rule and authority from 1648 onwards; it was built when Shah Jahan, the Mughal ruler at that time, decided to move the capital from Agra to Delhi. It is made from red sandstone and is one of the many marvels created and built by the Mughals. The Red Fort holds precious artifacts on display, which were, at some point, very significant for the Mughal Empire. The architecture contains many historically well-known places such as Diwan-i-‘Am (Hall of public audience) and the Diwan-i-Khas (Hall of private audience), Most of the carvings and the architecture are either inspired from or are a fusion of Persian, Timurid and Hindu traditions. Since 1947, the Indian Flag has been hoisted here at Red Fort by the Prime Minister of India on Independence Day. To visit this magnificent place, make sure you have 2 to 3 hours on your hand as this place is spread in a 120 acres land with rooms filled with various artifacts. 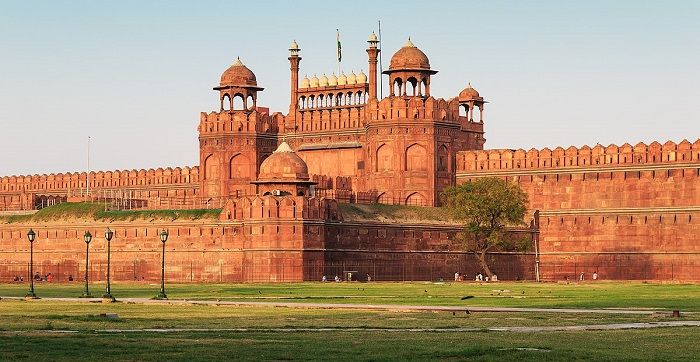 Red Fort can be visited every day except Mondays. The Red Fort timings are from 9.30 am to 4.30 pm. The best time to visit is from October to February, as this is when Delhi can be toured in its best form.

How to reach?: Red Fort is located in the capital of the country, so reaching this place is very convenient.

Mahabodhi temple is marked as the spot where Buddha first attained enlightenment and is one of the four holy sites that are related to Lord Buddha’s life. Emperor Ashoka built the temple in the 3rd century B.C., and the present temple dates from the 5th–6th centuries. This heritage site at Bodh Gaya comprises of the high standing temple, the Vajrasana, sacred Bodhi Tree, which is west of the main temple, it is considered to be the direct descendant of the original Bodhi Tree where Buddha is said to have attained enlightenment. The other six sacred sites of Buddha’s enlightenment, the seventh holy place, is the lotus pond, just outside the enclosure to the south. 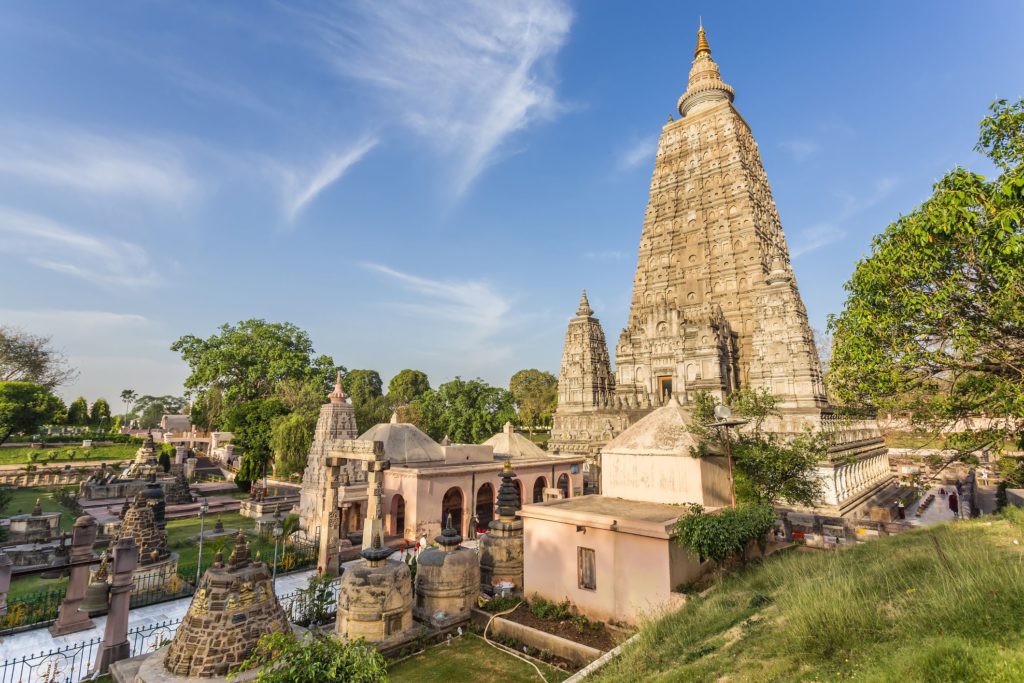 There are no entry charges to visit the Mahabodhi Temple, and you can visit the complex from 5 a.m. to 9 p.m. However, there are charges for cameras and video cameras, which are 100 INR and 300 INR, respectively. By spending a small fee, you can have access to the meditation park, which is accessible from sunrise to sunset. Chanting sessions are also conducted at 5:30 a.m and 6:00 p.m.
To maintain peace, visitors must leave electronic devices and cell phones at the free baggage counter at the entrance.