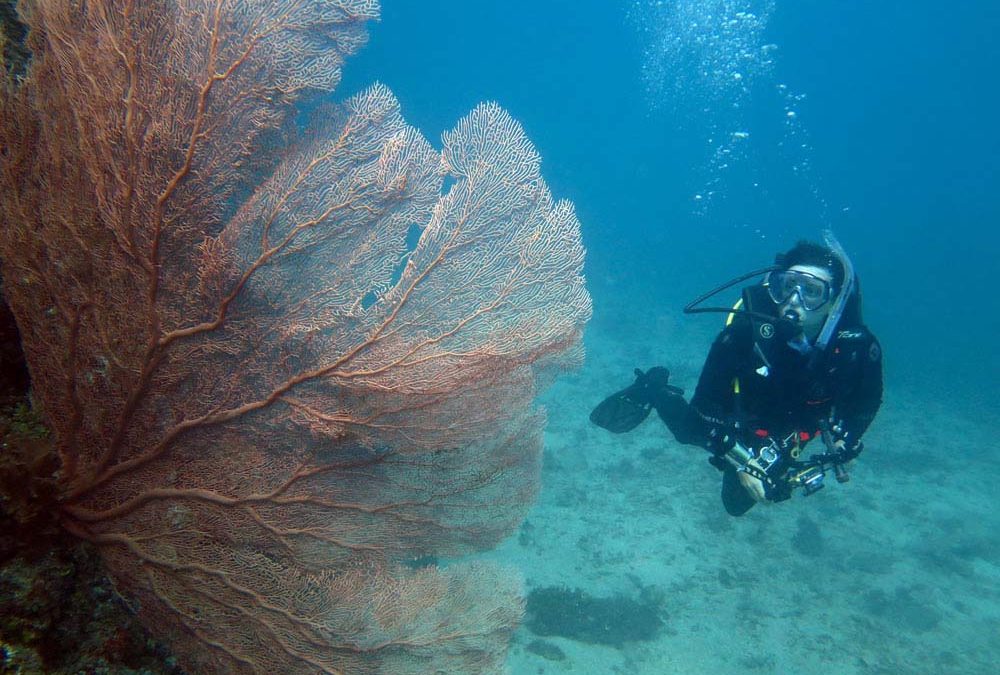 7 reasons to plan a family holiday in The Solomon Islands

The Solomon Islands could well be the next Fiji. Solomon Islanders are friendly, welcoming, great with kids ”“ and the place has that same ‘Fiji Time’ quality to it.

The pace is a bit slower, and there is a general chilled feeling that makes you forget your worries and just relax. Here are a few more compelling reasons to visit. 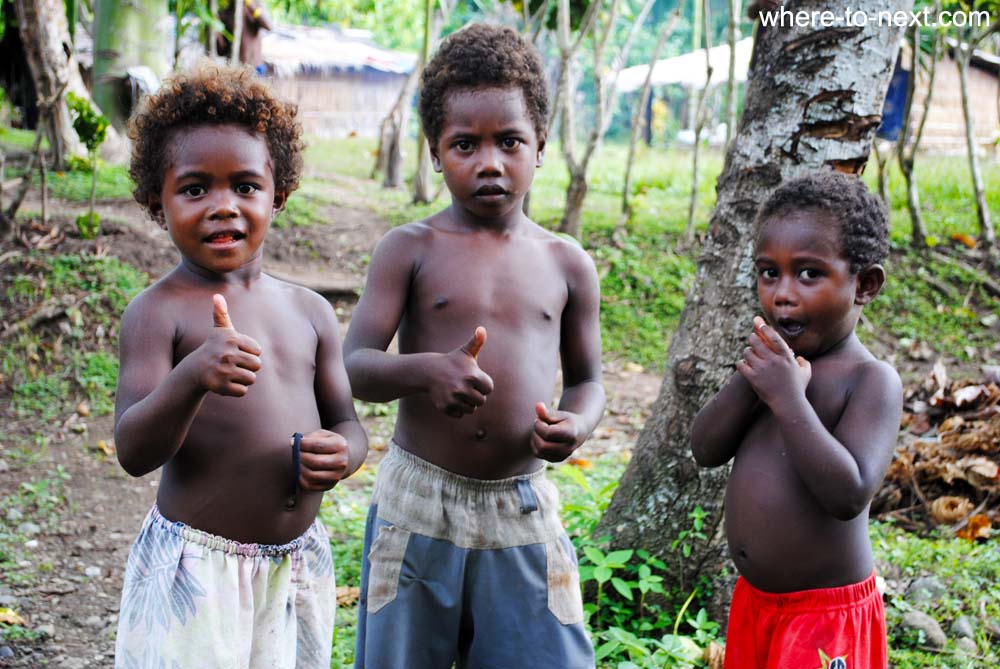 1. Bustling Honiara. There are a few resort hotels in Honiara, and a few in planning. The Heritage Park Hotel has well-appointed rooms, a great pool, and one of the best restaurants in town. The Solomon Kitano Mendana Hotel has a pool and two restaurants, one Japanese and one Western.

The city’s central markets are a great place to start exploring the city. You get to meet the locals and get a feel for the local cuisine. These markets are an explosion of colour and smells, with all sorts of seafood, unfamiliar vegetables and packages of food as well as second hand clothes, jewelry and sea shell dowries.

2. World War II History. A drive up the hill behind Honiara takes you to the war memorial, worth visiting for the view alone, but also for a read of the war stories etched into marble slabs. Further along the coast there is a great open air WWII museum that is a bit more fun for kids to explore. It’s basically a large garden, fringed with palms and littered with the rusting hulks of planes, tanks and assorted artillery.

If you’re really interested in WWII memorabilia, ask at the Visitor Information Centre for directions to other nearby sites. There is a fabulous collection of WWII paraphernalia in a nearby lock-up, with everything from bullets, grenades, mess kits and even coke bottles through to big guns, tanks and the odd plane wing.

Another collection sits in the garden of a Seventh Day Adventist girls school on the outskirts of town. 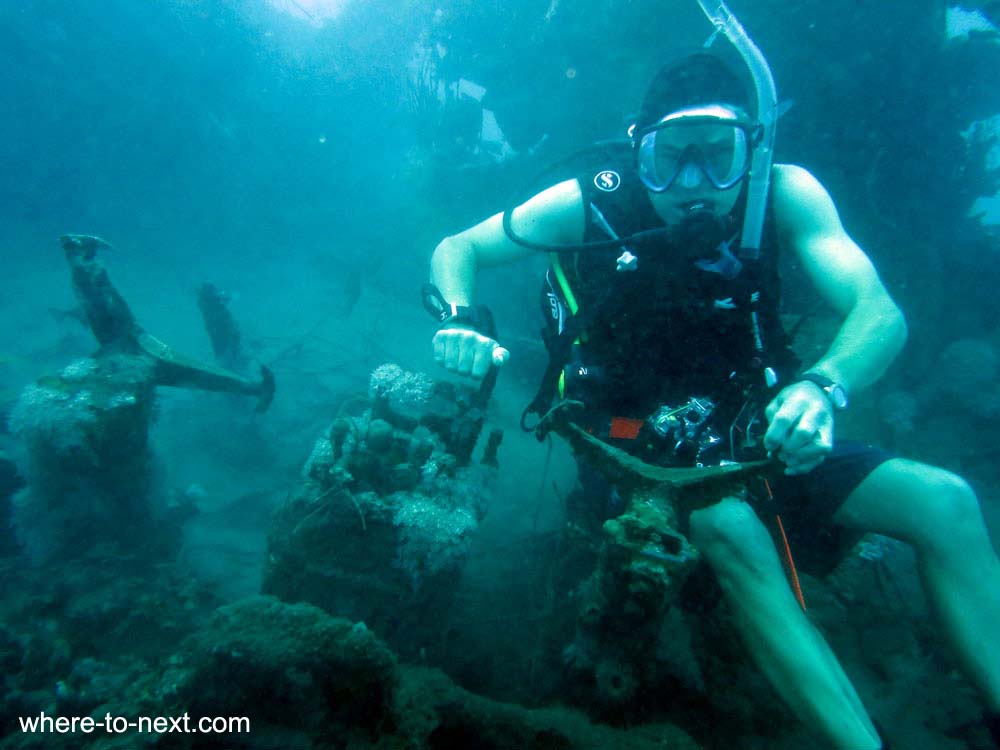 Fun in the cockpit of a B17

3. Wreck snorkeling. Beachside there are several underwater WWII wrecks along the coastal road, some in such shallow water that they can be explored with a snorkel.

“Bonegi 2” is an old Japanese Transport lying in such shallow water that parts of it are exposed. Just up the road there is a submerged B17 bomber, also in very shallow water and a 100m long submarine sitting just behind a very pretty reef.

4. Cultural Displays. We were lucky enough to visit Honiara while locals were rehearsing for a rather massive cultural display about to go on tour to Papua New Guinea, but this type of show is not uncommon here ”“ if you stay long enough at any of the resorts, you’re bound to be treated to at least one show.

It’s a fantastic array of music and dance, impressive headdresses and even a touch of comedy. There’s a great routine that involves a group of men dancing while belting out beautiful harmonies on enormous Panpipes.

5. Seghi Airport. Seghi rates a mention because it’s one of the world’s most unique airports. A little strip of grass on one of the western islands with a brightly painted blue shed (arrivals and departures), behind which is the taxi bay, a jetty, where a little speedboat taxi awaits to whizz you across the lagoon to one of the island resorts. 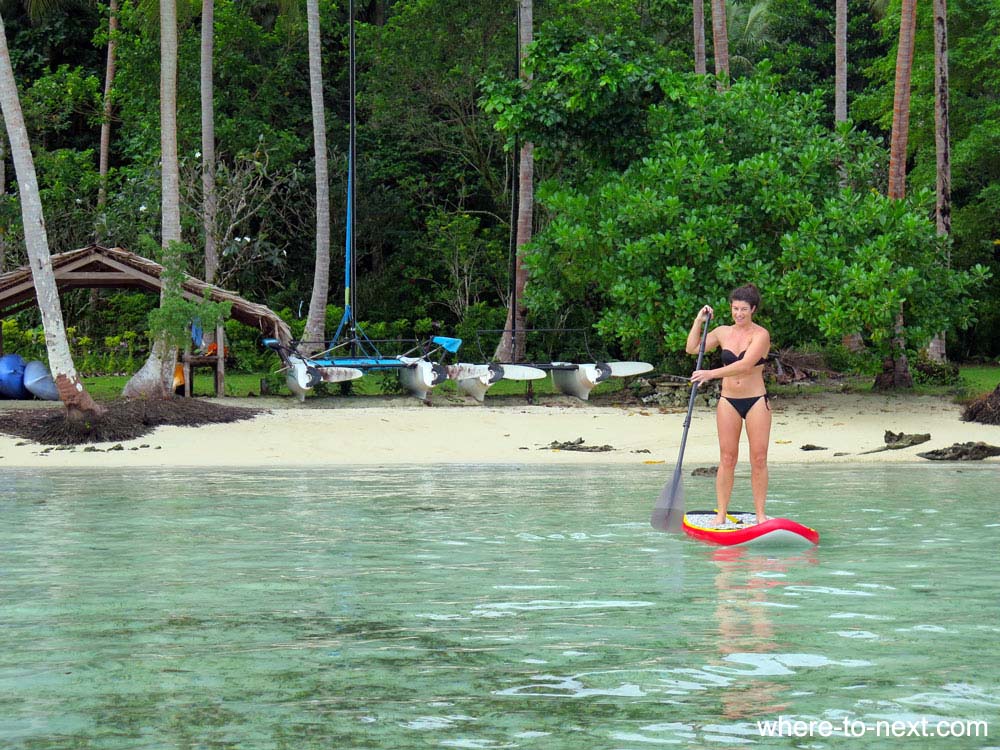 6. Uepi Island Dive Resort. This little resort has been here since the late 1980s, run by a very welcoming Australian family, the Kellys, who have done a lot to protect the surrounding environment and support local communities.

There are ten waterfront bungalows of various sizes and configurations, and the Main House which houses the restaurant, bar and relaxation areas. While here you are treated to three square meals a day, with lunch and dinner served buffet style and lunch delivered to your room. 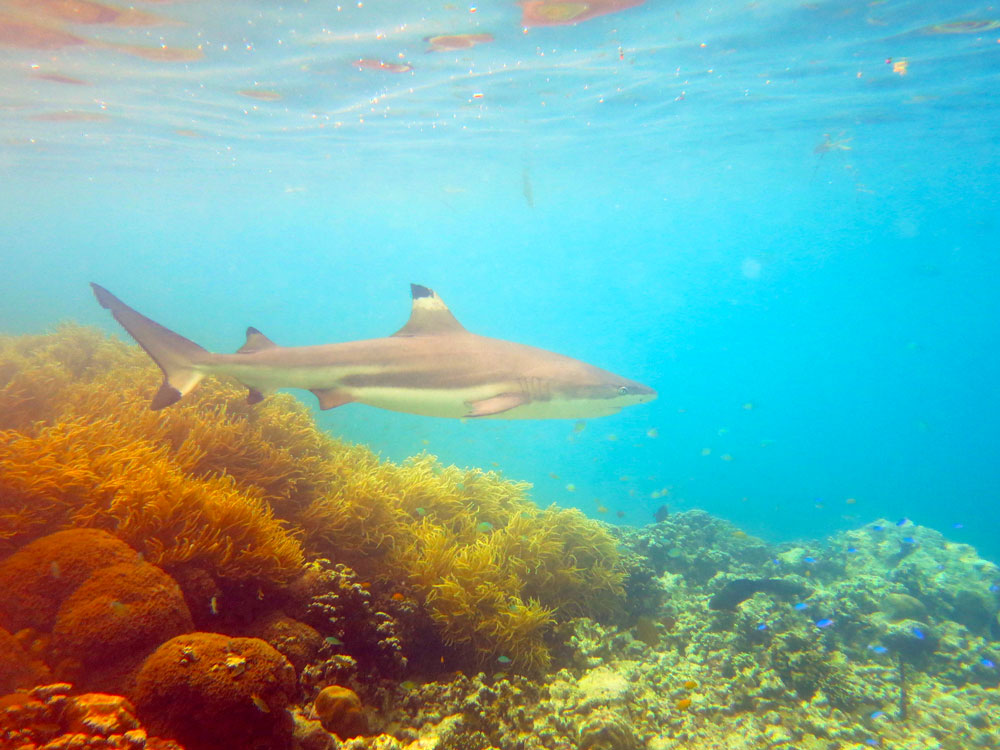 Snorkelling under the jetty at Uepi Island Resort

7. Snorkeling at Uepi Island. Uepi is surrounded by beautiful coral reefs, but you don’t need to be a scuba diver to appreciate it. Grab a snorkel, jump in the water by the jetty and you’re greeted by a wall of coral populated by schools of colourful fish and gorgeous reef sharks, cruising by so closely you could reach out and touch them (but don’t).

A snorkel under the jetty here is a fantastic way to introduce kids to larger marine life such as sharks in a safe, non-scary environment.

If they’re still a bit too timid for this though, I’d suggest going for a snorkel in the shallow lagoon on the other side of the island, where they’re more likely to encounter clown fish and turtles.

Also on the lagoon-side: catamarans, stand up paddleboards and kayaks, if you’d rather explore the lagoon above water. There’s virtually no current and the water is crystal clear so it’s an effortless paddle whichever vessel you choose, but I recommend trying a stand up paddle ”“ you get a better view standing on the board which makes it easier to spot turtles.