My Fascinating Encounter With the Colorful Maasai Tribes of Kenya

Caroline Shaw from our reservations team in London recently travelled on our Best of Kenya and Tanzania tour. While her time in these two African countries was filled with thrilling animal encounters, it was her day spent with the Maasai tribes people that really took her breath away.

One of the highlights of my recent trip to Kenya was the optional visit to a Maasai village during our stay in the Masai Mara National Park. Disembarking from the overland truck by our campsite for that night, we were greeted by Alex, a Maasai warrior, who was adorned with jewellery and wearing a bright red robe famous of the Maasai people.

He led us on a short five minute walk to the village, on the way teaching us about the plants we were passing and how the Maasai used them for dye and medicine.

Upon arrival we all sat within the shade of an Acacia tree whilst the men of the village showed us the famous ‘adumu’, the traditional dance of the Maasai men. During this competitive event, a circle is formed by the warriors and one or two will enter the centre to begin jumping while maintaining a narrow posture, never letting their heels touch the ground.

During this jump, members of the group raise the pitch of their voices based on the height of the jump. When a Maasai warrior is set to wed, he must pay the bride’s father a dowry of 10 cows, however, if he can jump higher this is reduced.

Here, your jumping skills contribute to your wealth – the higher you can jump, the less you have to pay. The men in our group were given the option to join in the dance, and one brave Australian, Ben, did just that with great gusto.

The sound of the voices of the men was utterly enchanting and it actually brought a tear to my eye – I felt very blessed to be given the opportunity to witness this.

After the dance we learnt more about the tribe and their traditions, how at the age of just 15, groups of teenage boys are sent into the bush for three years. During this time, they need to kill a lion and bring the teeth and the mane of the animal back to the village, marking their transition from boy to man.

The women of the tribe, dressed in colourful dresses and draped with handmade jewellery, also showed us their dancing rituals and welcomed us to join in with them – a lot more relaxed but no less amazing routine walking slowing around in a line raising their arms in a bicep curl. 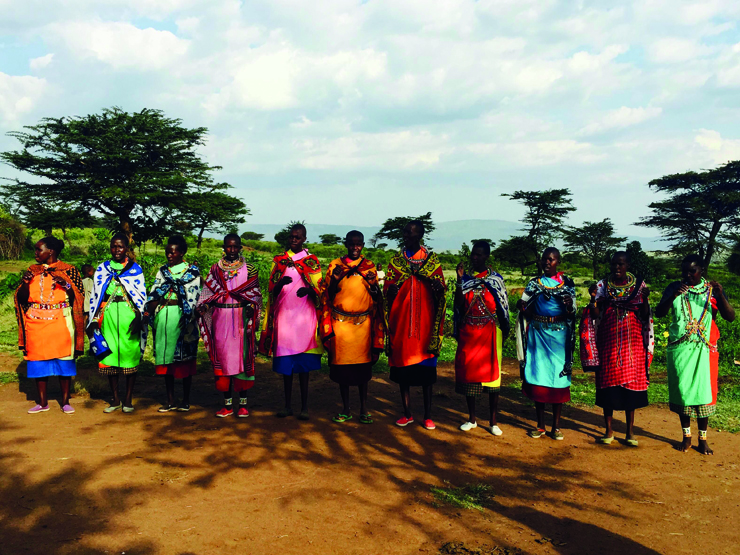 The women of the Maasai Mara tribe, lined up to start their dancing ritual

Heading through the gates of the village past the walls of thorns and branches that the Maasai put in place to guard against unwanted predators, we were greeted by many little kids with big smiles who took great joy in mimicking their elders by jumping as high as they could.

Members of the tribe demonstrated how to make fire using two sticks and welcomed people on our tour to join and try to make fire themselves – of course, the tribe members made it look a lot easier than it was. 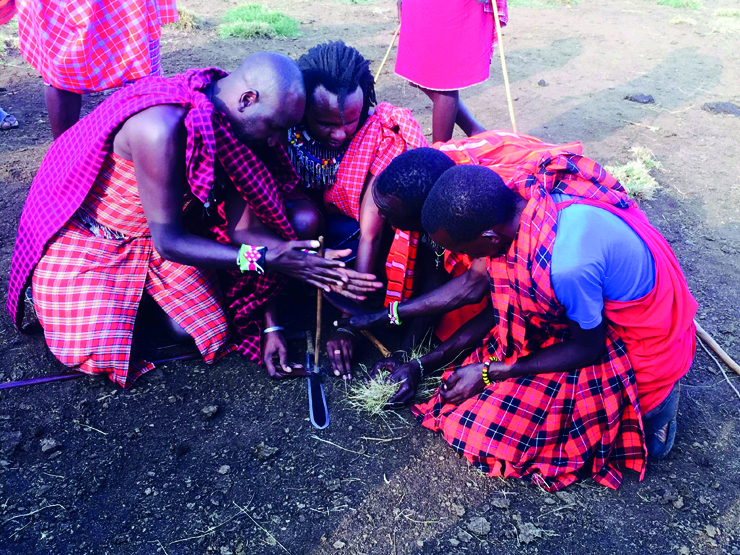 Using nothing more than a couple of sticks, members of the Maasai Mara tribe showed us how they make fire

We were then taken in groups of two into a Maasai house, the small abodes made of cow dung which, while this sounds unappealing, didn’t have any sort of unpleasant odour. My mother and I sat on the guest bed made of branches as one of the warriors told us about the house which belonged to his mother. There was barely any light, the small amount coming from a window no larger than a postcard, but in the centre of the room was a fire of hot embers slowly burning away.

This was the home of two adults and five children, and looking around, I wondered how they could all fit in a space no bigger than a typical master bedroom we are used to. The small room at the front of the house was for the baby goats, to protect them from the cheetahs and lions that roamed the outskirts of the village. They had barely any belongings, just a couple of basic pans to cook with, but we were made to feel instantly at home thanks to their open and warm hospitality.

After time spent chatting, we headed back outside to meet the rest of our group, say thanks to the tribe and head back to camp. The whole experience was incredibly humbling and it was so lovely to see this fascinating tribe continue with their traditional way of life in the 20th century, keeping their culture and simple life in a world that is ever evolving.