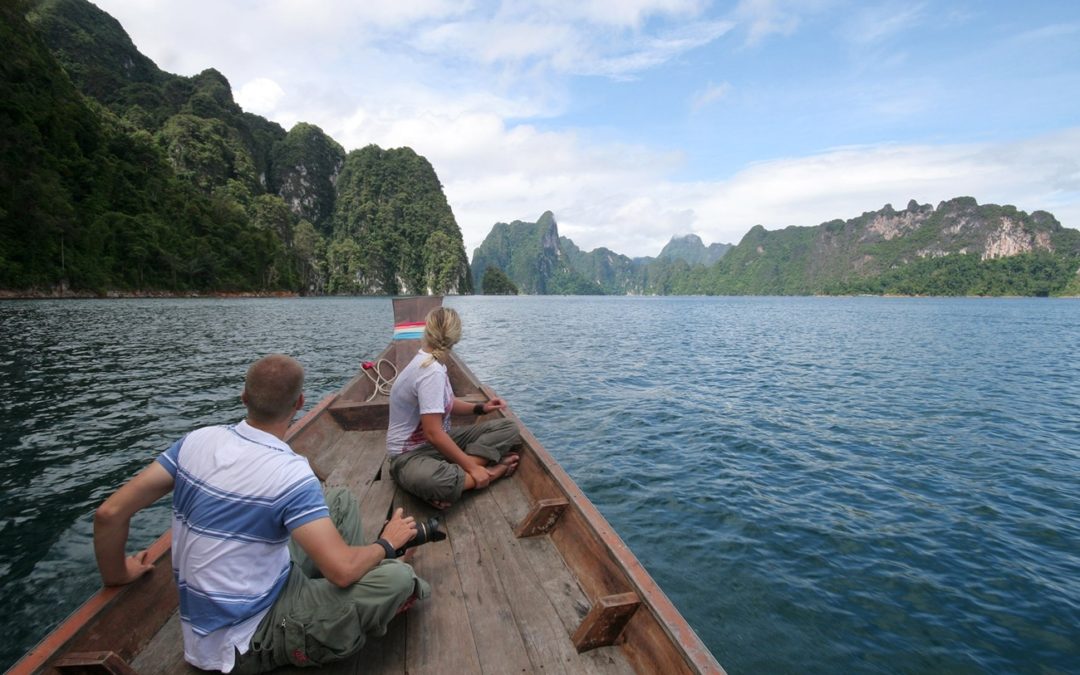 Between beaches in Thailand

Today we welcome Tom Neal Tacker as a regular special guest contributor to the Wego Travel Editor’s Desk. Tom is a well respected and legendary travel writer, serving on the Advisory Board of the Australian Festival of Travel Writing and a regular guest speaker at Australia’s Travel Writing Festival and Melbourne’s International Writer’s Festival. With a keen sense for journey’s that are slightly off the beaten track he shares his stories on his site at nakedhungrytraveller.com.au. Specialising in adventure, eco-tourism and gastronomic encounters we know you’ll enjoy his colourful and very entertaining tales from the road.

There’s a lot more to a holiday in Thailand than a beach.

Heading west to east from Khao Lak north of overcrowded Phuket, we leave the beaches behind and head for the hills, first stop, Elephant Hills Rainforest Camp nestled among the dominating limestone karst outcrops, jutting like rocky white spears into the humid air.

If you know the scenery around Guilin in southern China or Halong Bay of Vietnam or Vang Vieng in Laos, the high peaks of southern Thailand may come as a surprise. The limestone peaks here are the highest of their kind in all of South-East Asia, soaring up to 600 metres. Between the spires lies the greatest stretch of intact rainforest in southern Thailand. KhaoSok National Park is a hotspot of bio-diversity.

Approximately halfway between the enormously popular islands of Phuket and Koh Samui, where Thailand’s international beach holiday experience is most strongly focused, lies this huge swathe of green rainforest, more than one hundred square kilometres of virtually unknown national park.

Elephant Hills is privately owned, treading very lightly on its surrounds. At the main camp on the border of the park an Asian elephant sanctuary operates as a learning centre rather than a safari park. Here you don’t ride the elephants. You feed them and wash them. The whole two or three day ’Jungle Safari’ is about interacting with the ecology, including some of the indigenous species such as the Asian elephants, rather than viewing them as if at a zoo.

Within an hour of arriving at the camp, I’m in an open air kitchen, machete knife in hand, with large bowls of fruits and vegetables, bamboo stalks and banana fronds in front of me spread out over a large bench. Chop, slice and dice. The elephants are lining up for their afternoon feed and they don’t like to be kept waiting for lunch. For a moment, I’m reminded of an ’All You Can Eat’ brunch buffet at a run down Las Vegas casino I once visited.

The feeding is a frenzied affair. Some elephants chew while holding bananas, pineapple slices and pumpkin pieces curled in their trunks, waiting to be thrust into the endless operating machines that are their digestive processors. We can barely keep up chopping, slicing and dicing. Others politely finish eating what’s in their mouths before snatching from your hand the next course. Elephant etiquette is as varied as that practised by humans; some individuals have no manners, some are gracious. Eventually the enormous piles of vegetable matter are consumed; something I didn’t believe possible when I first saw how much food was laid out. Indeed it’s an elephantine lunch.

After the feast, we stroll down to a pond for a bath. Then we walk back to a common area for a wash and scrub. I’m handed a wad of twisted coir rope and a bucket of organic soap and water. One of my travelling companions holds a hose for rinsing. I dip the prickly sponge into the soapy water and scrub clean my elephant’s very full belly, around her tail, under her legs, her neck and behind her ears. She whacks me a few times with her trunk if I miss a remaining dirty spot. Rinsed as clean as a shiny new grey Mercedes, she squirts me one last time and wanders off to join her companions. By now, I’m covered in grime and badly need a shower.

Instead, our small group board canoes and paddle down a nearby river. Tree snakes loop around over hanging branches. Well hidden monkeys peer from behind dense foliage. A few sets of easy rapids and narrow channels create enough excitement to turn the doddle down the river into a slight thrill. After a few hours, we shore our canoes at a deep spot where ropes tied to large branches have been suspended over the water. Grabbing hold of one, I swing out over the water, let go and am cleansed of mud, sweat and elephant dung. The desire to yell out like Tarzan is barely suppressed.

Back at the tented camp, it’s time for a Mekong whisky and tonic, dinner and a chat with our hosts about wildlife, how the park evolved and its ongoing problems. Deforestation surrounding the park continues to be a challenge. Though Khao Sok’s total area is large, animals such at Asian elephants and Indo Chinese tigers require huge areas in which to thrive. Inbreeding presents a different set of problems as do poaching and water pollution.

Elephants Hills’ newest camp is on Cheow Larn Lake, which the Khao Sok national park completely encircles. The Cheow Larn dam was built in the 1960s, sadly flooding one of southern Thailand’s last pristine river systems. The lake filled the deep valley, flushing out Thailand’s last insurgent communist strongholds, though the government at the time spruiked the hydroelectric power generation and clean water source for Surat Thani province as its main reasoning behind the dam’s construction. The dam’s destruction of riverine habitat also accompanied the expansion of another habitat, the rainforest itself. To protect the watershed around the lake, the park has become one of the last refuges for wildlife in this rapidly developing region.

There are a few other lake camps, mostly used by holidaying Thais, rarely by international travellers. Though these camps are integrated into the surrounding forests, their waste management, power generation and recycling facilities leave much to be desired.

Much further up the lake from the other camps, Elephant Hills Cheow Larn Lake tented camp is completely isolated. Fully powered by solar cells and all water is treated on site before it’s allowed to re-enter the surrounding lake. The ten individual floating tents, insect proof with mosquito nets and flyscreens and all with ensuite bathrooms are models of sensible environmentally aware management and construction. Each tent has a kayak floating just outside its door. One main open air dining area serves as reception room, dining room, breakfast room and bar. It’s very small scale, very private and extremely secluded. In short, this is bliss for any traveller bent on escaping the crowded beaches of Phuket and Koh Samui.

As soon as I put my bag on a bench next to my bed, I step out on to my deck and jump into the emerald green waters of the lake, swimming out to look back at my floating tent, the white limestone mountains, the dense forest and feeling completely at ease.

Exploring this rare forest by kayaking through narrow channels is exhilarating and simply wonderful. Flocks of hornbills fly from one tree to the next, honking their weird calls directly overhead. Lars gibbons hoot constantly. Kingfishers dart among banks of reeds, flashing blue and green while diving for tiny fish.

I’m told that a local fisherman recently tied his boat to a tree near the camp, walked into the forest, returned and found a clouded leopard asleep in his seat. Wild elephants come down to the lake to drink. Tapirs, fishing cats, tigers, wild pigs, pangolin, Asian ox and deer inhabit its fringes.

With permission from the camp manager, I embark by kayak for a solo dawn exploration. I’m hoping to see elephants or if I’m very lucky, a tiger. I’m alone on a big lake. Over 100 kilometres of countless channels and dozens of little islands constitute Cheow Larn’s expanse. I paddle silently while the sun rises over mist enshrouded peaks. Gibbons begin to hoot, claiming their territory, announcing in gibbon-ese from across the lake, ’We’re here! Nice day isn’t it?’ I lie back in the kayak, close my eyes and revel in my solitude.

No tigers sighted that morning or elephants either, but the gibbons and hornbills prove good company anyway.

See www.elephant-hills.com for information and bookings and Wego for flights. Transfers to Elephant Hills’ camps from Phuket or Koh Samui or a variety of mainland southern Thai resort towns may be arranged with prior notice.