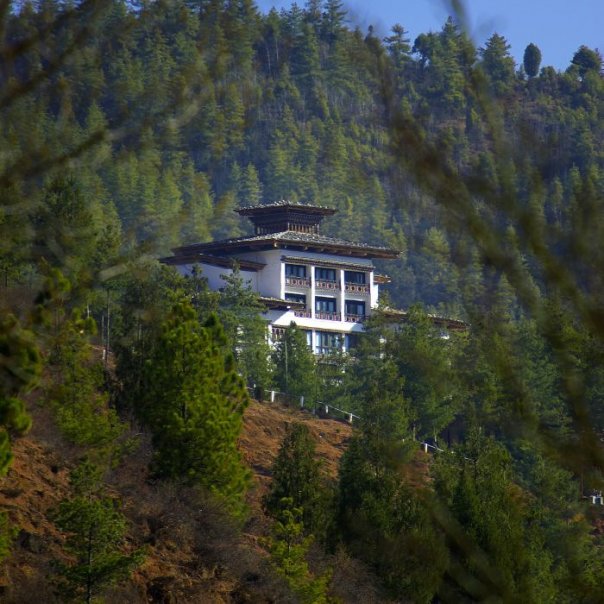 Bhutan – Heavenly Kingdom in the Clouds

One of Asia’s tiniest countries nestled high in the Himalayas between India, Tibet and China, Bhutan is quite otherworldly. For centuries this tiny kingdom has sat on top of the world untouched by the movement of time, secluded from the concerns and priorities of larger nations, or the western world.

Visitors say there is magic in the air and happiness is a serious business. In fact in 1972, Bhutan’s fourth Dragon King, Jigme Singye Wangchuck credited with opening Bhutan up to more economic prosperity, coined the phrase ’gross national happiness’, upon which followed a sophisticated survey designed to measure the population’s general state of well-being. It has been said that Bhutan is one of the happiest places on earth and national happiness is a result of a positive outlook and social community, based on staunch Buddhist beliefs. Still when the fourth Dragon King says ’Gross National Happiness is more important than Gross National Product’, you kind of get the gist of the holistic outlook of Bhutan society.

It helps to be surrounded by breathtaking natural beauty but there’s definitely a peace and tranquility here not found in many other places. Bhutan could well be linked to James Hilton’s 1933 novel, Lost Horizon, which tells of a Himalayan utopia; Shangri La, a permanently happy land where people live a long lifetime, isolated from the rest of the world. Although most make that connection with Tibet, there are many similarities also with this lovely piece of the world.

There’s a wide variety of accommodation in Bhutan and all hotels are governed by the Bhutan Tourism Authority who ensure that there is hot and cold running water, telephones and most have a wide range of cuisine. But if you want to do Bhutan in extraordinary style you can’t go past the divine Uma by COMO.

Its nine private villas and 20 luxury rooms which combine textured Bhutanese craftsmanship with the modern comforts of a COMO property are fresh and original. Located in the beautiful Paro Valley, one of Bhutan’s most historic locations, its proximity to Tibet gives it a uniquely different cultural flavour. Paro is also convenient as the location of the only international airport which is a sight in itself. Framed by peaks as high as 5,500 metres the airport sits beside a running stream in a most picturesque landscape.

The Uma can provide English-speaking guides to explore the incredible temples, local and historical highlights of the Paro Valley. If you’re after adventure you can enjoy hiking, biking, even overnight camping adventures and the retreat naturally has some of the best yoga and holistic therapies you will ever find anywhere. In fact there’s a huge range of therapies and treatments available from Ayurveda, to massages in treatment rooms nestled within the thick surrounding pine forest. The indoor pool and traditional Himalayan hot stone bathhouse are not to be missed. Archery is a national sport in Bhutan and the resort offers lessons in the traditional ways of the bow and arrow.

A visit to the Taktsang ’Tiger’s Nest’ Monastery is a must and if you’re a newlywed couple, a special blessing from the monks can also be arranged. This breathtaking monastery built into the cliff side (3,120 metres above the valley) was first constructed in 1692 around a large cave. It’s said that in the 8th century, Guru Padmasambhava meditated in the cave for three years, three months, three weeks, three days and three hours and introduced Buddhism to the country.

One of the oldest temples in Bhutan said to date back to the 7th century, is the Kyichu Lhakhang which is also nearby, and a visit to Paro Town, the area’s only market is home to an array of complex traditional architecture, richly decorated buildings housing small shops and restaurants.

A tapestry of stunning landscapes, rich history, legendary temples and some of the happiest people on earth, should push Bhutan to the top of your bucket list of places to see.

TIP: Enjoy the rare dreamy luxury of Uma COMO resort in the mystical kingdom of Bhutan at a very special rate, see more here about this very special deal.