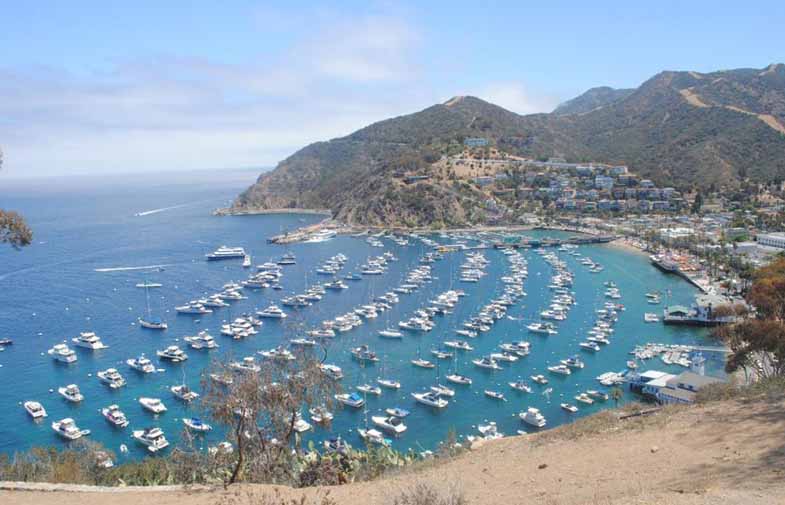 California’s Anaheim Orange County is of course more famous for Disneyland and well, The OC. But did you know you could see wild buffalo on a small island off the coast of Anaheim? Or blue whales, leopard sharks, seals and bat rays? Neither did we.

If you’re planning on taking the kids to Disneyland, I highly recommend this little day trip option ”“ for time-poor families like ours, it’s an easy way to experience the Great Outdoors without driving for hours through national parklands.

Catalina Island is about an hour by fast ferry off the coast of Long Beach, California. So not too long a trip ”“ but long enough to spot a blue whale swimming nearby.

After our unexpected whale, we arrive at the beautiful Avalon Bay and head for the kayak centre.

By the way the kayak centre has lots of gear to choose from, so you don’t need to worry too much about being under-prepared ”“ there’s even a choice of sandals or reef shoes as some of the beaches are quite rocky.

We made our way out into the clear blue water and down towards frog rock (which if you ask me, looks more like a baboon from the other side).

We looked around for bat rays and leopard sharks but at first all I could see were very pretty golden fish, which my guide tells me are the official state fish of California: the garibaldi. Who knew there is such a thing as a state fish?

Further on we saw tens and tens of leopard sharks just swimming around in the shallows. I’m no fan of sharks but it is very cool.

They’re a completely different type of shark to what we call leopard sharks in Australia, and the markings on them are very pretty.

We stopped at a pebbly beach after our visit to Frog Rock and helped ourselves to some homemade cookies and water while our very knowledgeable guide told us stories about the island, and it was all very interesting to listen to.

Santa Catalina Island (as it was originally known) served as a location for the filming of hundreds of Hollywood movie productions. It’s been passed off as the north coast of Africa, Atlantis and the home of that famous mechanical shark in Jaws.

The North American bison herd that roams the island were supposedly introduced to the island for the filming of the Western, The Vanishing American, although apparently the film doesn’t contain any bison whatsoever. Maybe they ended up on the cutting room floor.

On our way back a fur seal appeared out of nowhere. We were really close to shore as it frolicked around our kayaks for while before heading out to deeper water. What a way to end the trip!

After drying off a bit we went to the Bluewater Seafood Restaurant and I helped myself to a ‘Classic Aussie Burger’ (which did not disappoint).

The restaurant sits on the pier, so as you eat you can see all the way to the bottom of the seabed.

After lunch we went for a drive up the hill that surrounds the town of Avalon and we were able to get some great photos of the incredible views up there, before heading over to our next activity: zip-lining.

The zip-lining adventure begins 150 metres above sea level, at the top of “Hog’s Back”, near the gate to the interior of the island. From here, we travel travel for 1.2 kilometres via zip line down to Descanso Beach.

Our zip-line guides, Jake and Alex were very funny and made us all feel safe and comfortable as they helped us gear up.

The ride is made up of five sections with a total elevation drop of 130 metres and speeds reaching 70 kilometres per hour. Between each section we get to admire the views from the platforms ”“ seriously the best views you could get of the island.

On the last line it took a photo, so everyone was trying their best to strike a pose before the wind turned them around. It was pretty funny – definitely worth doing.

NB: This post is written with a lot of help from my eldest daughter Holly ”“ and aspiring travel blogger and photographer (the photos are all hers too).