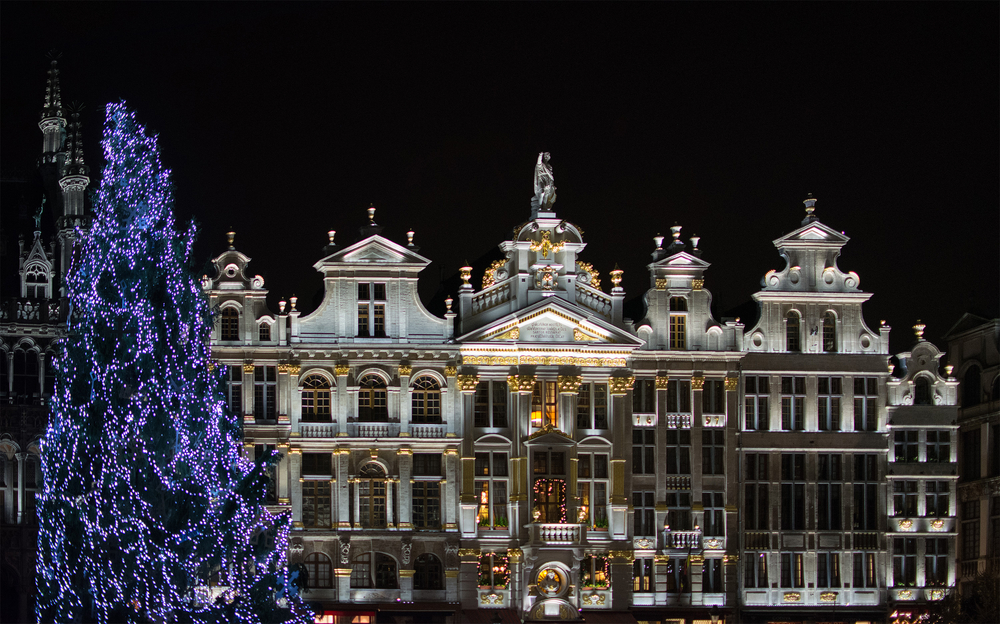 Which Christmas destinations sparkle the brightest this year?

Which are your favourite Christmas cities? We checked out some of the world’s most festively decorated destination, and also found that airfares are not always the most expensive at this time of year. There are still bargain flights to be found so if you’re like me and leave everything to the last minute, why not add some super sparkle to your Christmas and jump on a plane, there’s still time! Here’s what Wego’s aviation guru, Dean Wicks, has to say about it:

“Some cities go to extraordinary lengths to sparkle the brightest at Christmas. Many travellers actually select their destinations at this time of year based on the special celebrations taking place,” said Dean Wicks, Chief Flights Officer at Wego.

“If you wanted to add some extra sparkle to your Christmas, it’s not too late,” Wicks added. “Airline competition is hotter than ever. This was once a period when fares dramatically hiked upwards but with the introduction of long haul aircraft used by budget airlines, it’s no longer the case. Airlines are competing to sell seats during what is one of the busiest travel seasons of the year and there’s loads of bargains to be found.”

“There’s some surprisingly good deals around if you take a moment and do a comparison,” he continued. “For instance from Singapore, AirAsia has a promotional fare to Kuala Lumpur for only SGD$40 or how about Bangkok on Scoot for only SGD$61 or go even further with Jetstar, a ridiculously low fare of SGD$102 one-way from Singapore to Darwin, and there’s lots more!”

“From Kochi to Muscat, Jet Airways is offering fares for INR 5,487, or treat yourself to a business class upgrade (subject to space) available at the airport on all flights out of the UAE for AED 450 with Air India,” said Wicks. “Air India is also offering flights from New Delhi to San Francisco for Christmas and New Year for INR 78,141.”

“And from uae.wego.com we see that Etihad is offering fares from Abu Dhabi to Bangkok for AED 1660, and Qatar is even offering specials in First Class,” he continued.

So don’t let the festive season put you off fearing expensive airfares, there’s loads of bargains still to be had and loads of great 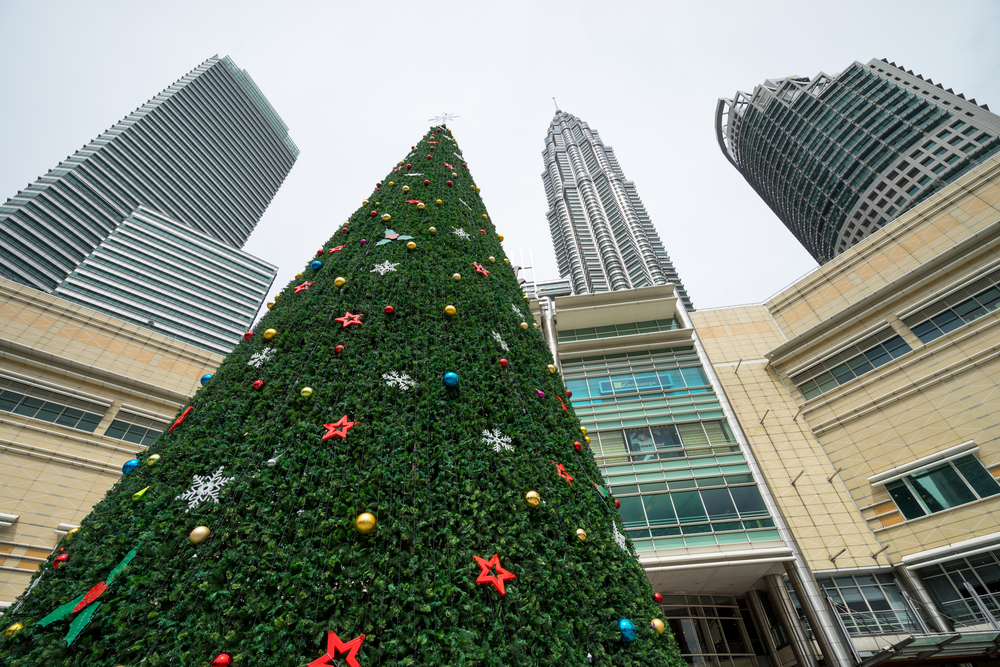 Kuala Lumpur
The Malaysian capital’s streets are lined with bright fairy lights; malls are decorated with holly and Christmas trees, and year-end sales make for great bargain shopping. The malls are bursting in a frenzy of shoppers with deals on gadgets, clothes and home furnishings.

The kids will love the Santa’s workshops at Suria KLCC (’Elf Yourself a Merry Christmas’) and at Pavilion KL (’Christmas Enchantments’), while carollers serenade shoppers with an array of Christmas songs.

If it’s a touch of white Christmas you’re after visit Pavilion KL each evening where it snows (artificial) at the Bukit Bintang entrance. Or lace up your ice skates and head to Sunway Pyramid Ice with the little ones for a spin on the rink. 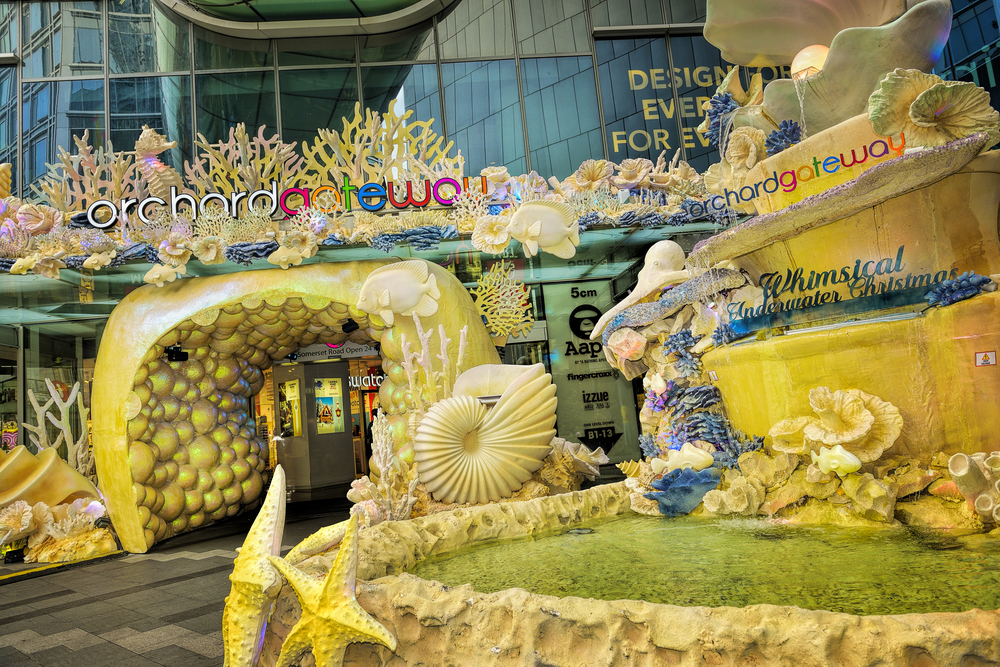 Singapore
The famous shopping belt on Orchard Road is spectacularly lit up every December adding to the festive mood, and serves as a blazing reminder to hit the malls. Christmas music fills the air between ION Orchard and Takashimaya, and the street turns into a stage with mini-performances providing the ultimate ’live’ Christmas soundtrack.

Don’t miss Christmas Wonderland, Singapore’s biggest yuletide fair, created to enthral visitors with a combination of magnificent light sculptures and charming festive markets. Now in its third year, the fair spans 57,000 square metres, across four main areas with the market at the Supertree Grove, the Fairground, Ice Palace and Hi-5 Funtastic House in The Meadow. 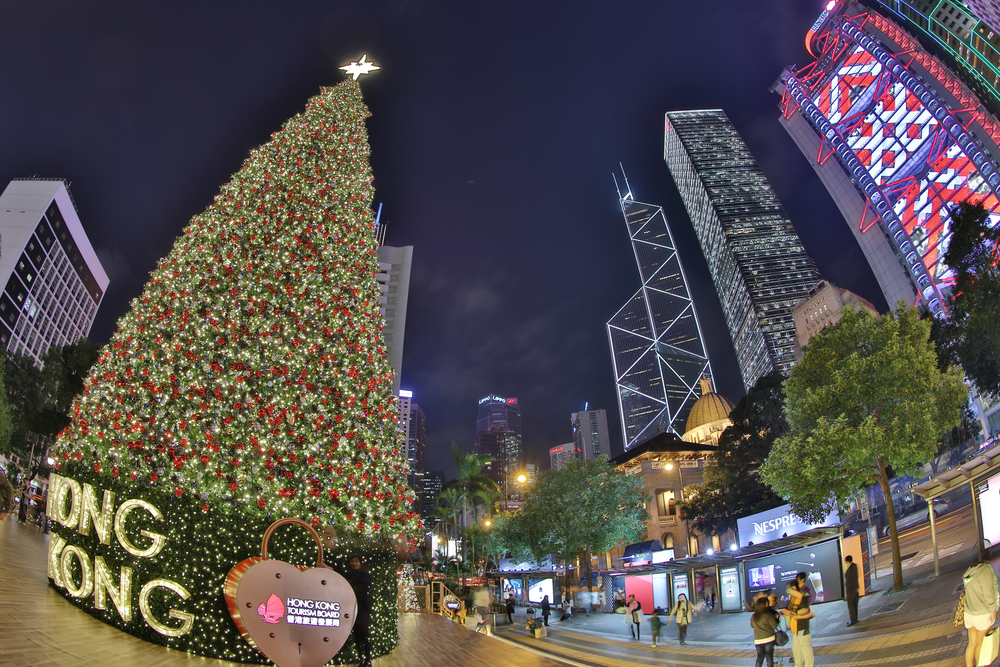 Hong Kong
You could possibly say that Hong Kong are the festive season experts celebrating a variety of cultural moments with panache, and Christmas is no different.

In the heart of Hong Kong a giant tree in Statue Square sets the scene, but the real magic happens when the sun goes down and the city lights up with the Pulse 3D Light Show. High rises and laser beams shine into the night as iconic buildings become the city’s personal decorations.

Take the kids atop the Observation Wheel as it’s transformed into a winter garden with twinkling lights, bells and candy canes, or head to Hong Kong Disneyland which bursts with Christmas magic. 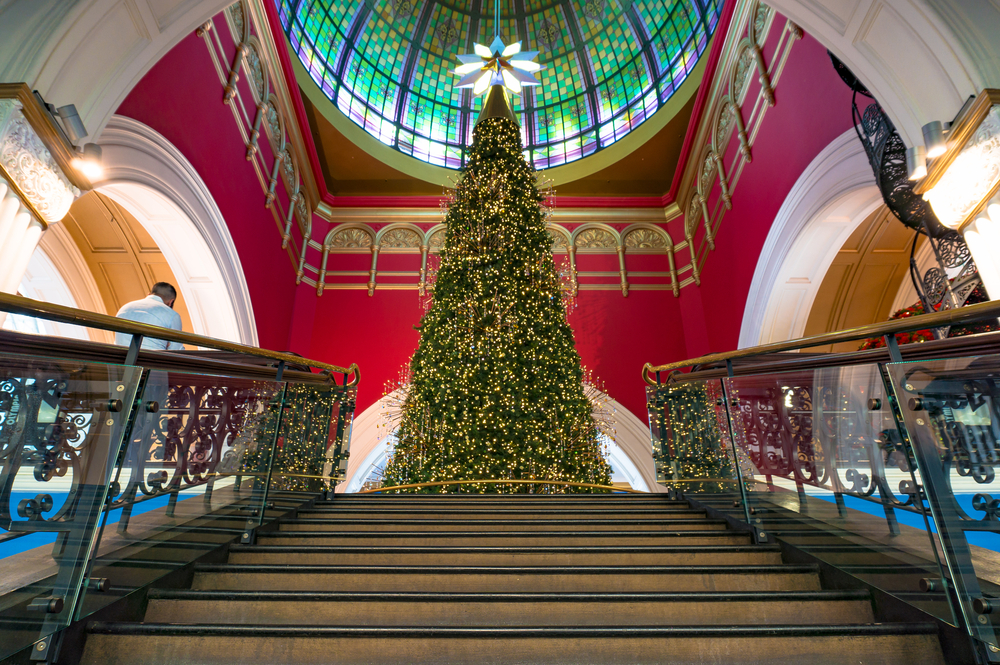 Sydney
Sydney’s Christmas event calendar is as full as Santa’s sack. The most popular is the Carols in the Domain event, which sees thousands of families gather in the Royal Botanic Gardens for a giant singalong led by some of Australia’s greatest entertainers.

For something different, head to Taronga Zoo and see wombats, koalas and kangaroos beside some of the most spectacular views of the harbour. For food and wine lovers visit the Hunter Valley Gardens which puts on a display of over two million lights. 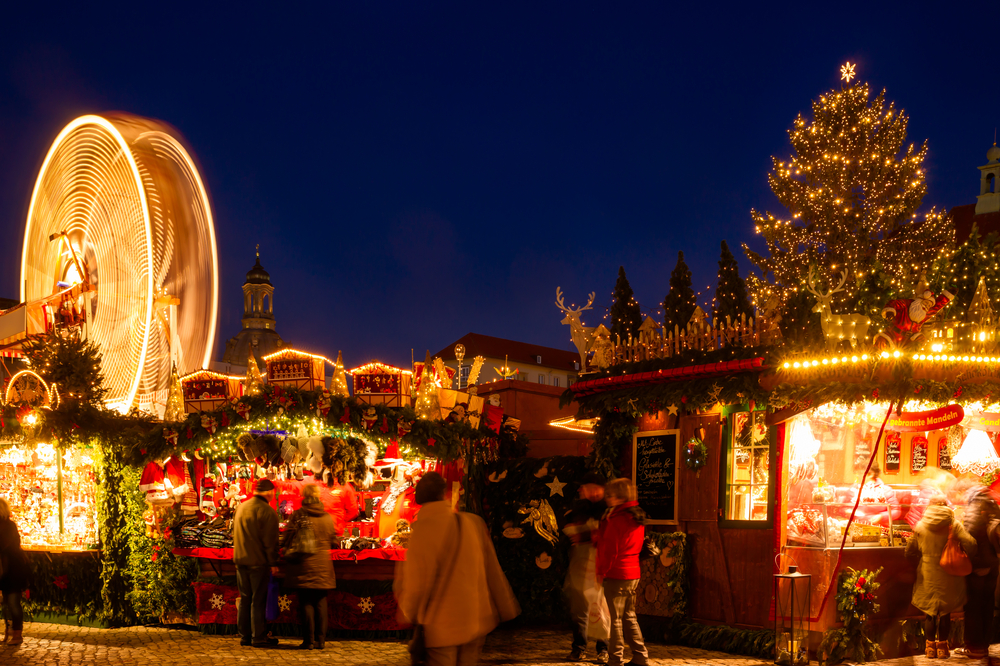 Dresden
The Dresden Striezelmarkt, Germany’s oldest Christmas market is a bustling marketplace with traditional holiday treats in the heart of the baroque city. In it’s 582nd year, the historic market is open until 24 December at the Dresden Altmarkt square. 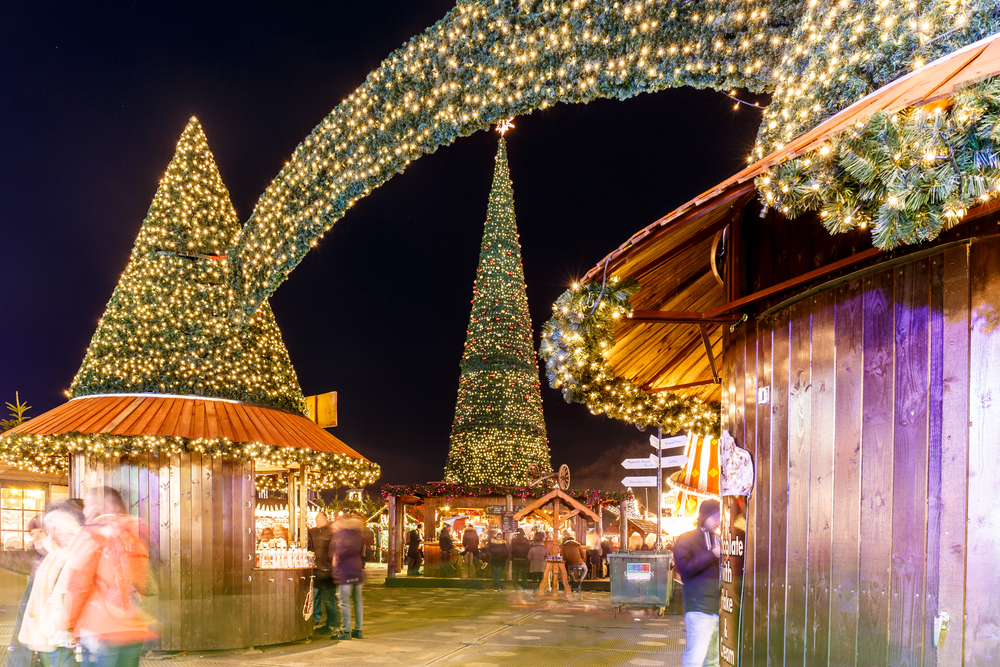 London
Oxford Street is filled with thousands of glittering ’snowballs’ and glowing stars, in conjunction with the UK’s children’s charity, NSPCC. The Royal Exchange are keeping things simple with a huge tree, tons of lights, and plenty of Christmas carols. And playing a starring role, the 22 meter Christmas tree at the iconic Trafalgar Square.

Hyde Park’s Winter Wonderland returns for the tenth year, with loads of fun and activities including a Christmas market. On a slightly larger scale, check out the vast Kingston Christmas Market and Christmas by the River at London Bridge City, next to the mighty Thames.

See a classic English pantomime at the London Palladium; this year featuring Cinderella or singalong once again with the songs of Frozen, at Disney on Ice.

Brussels
A 22 metre, 35 year old fir tree takes pride of place at the Grand Place, and from there and continuing around the Bourse, Place de la Monnaie, Place Sainte-Catherine and the March© aux Poissons, the Winter Wonders celebration combines Christmas markets, an ice skating rink, light and sound shows and more in a classic, sparkling European Christmas scene. 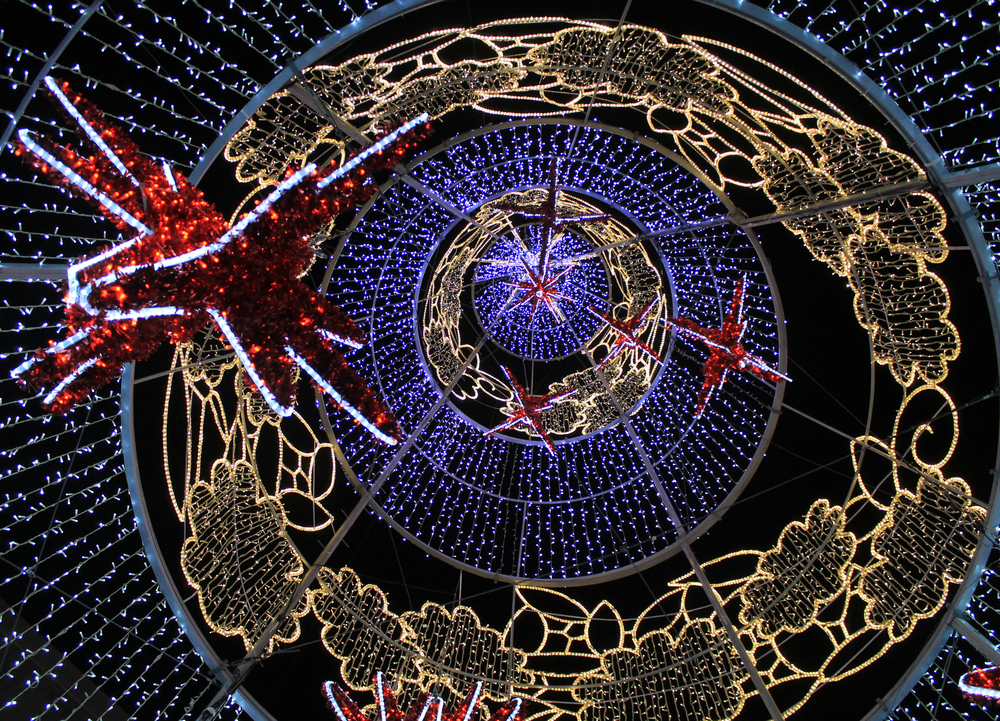 Madeira
A traditional annual event, the Farmers’ Market on the 23rd of December see Avenida Arriaga fill with revellers who grab their last minute purchases for Christmas dinner, sing carols and hang out with family and friends.

The stunning Portuguese island also throws a pretty solid New Year’s Eve, and was listed in the Guinness Book of World Records in 2006 for the largest fireworks display in the world. 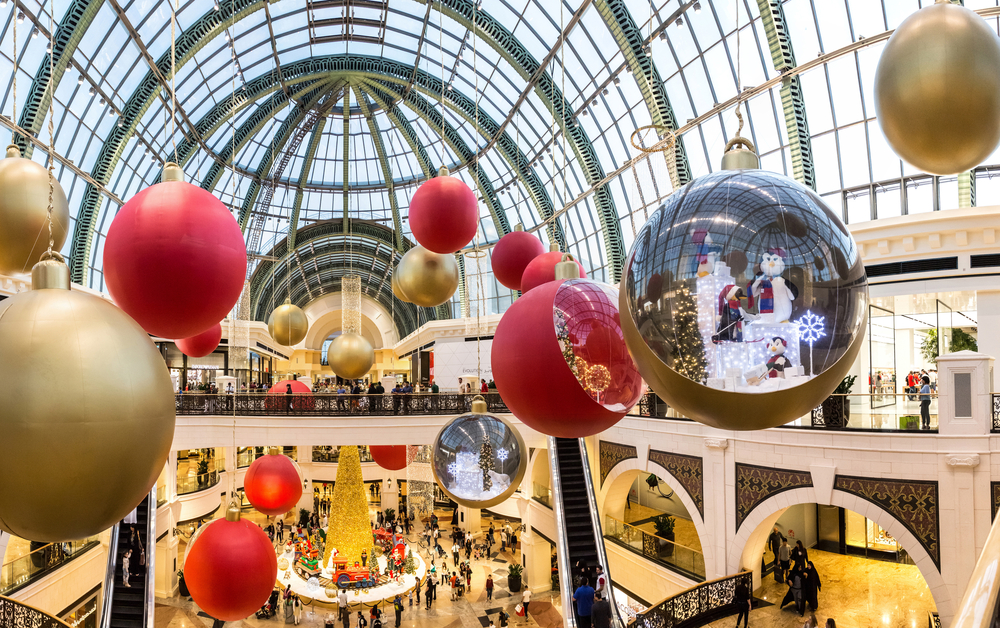 Dubai
It may be in the middle of a desert but Dubai adds their five star sparkle to everything. Santa visits regularly right up until Christmas Day at the majestic Atlantis, and Dubai Creek Heights’ Hyatt Regency is hosting a Christmas market where you can pick up some homemade cookies, gingerbread, German stollen and alcohol free gluhwein. Byblos
One of the world’s oldest cities, Byblos has designed an incredible Christmas tree which resembles a house with warmly lit windows. Visitors can physically ’enter’ the tree where they’ll be treated to mindblowing decorations and three dimensional art.

Christmas trees are a specialty in the historic city, with a 35 metre high tree composed of 35 tons of gold-coloured steel mirrors selected by The Guardian newspaper last year as one of the most beautiful Christmas trees in the world.