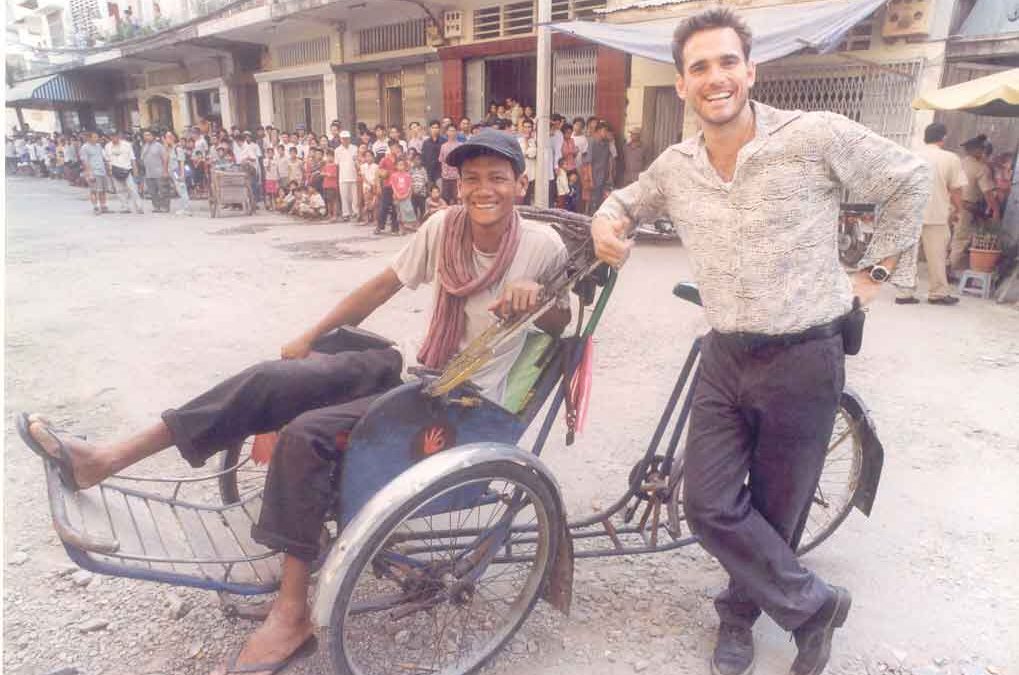 City tour with the star of Phnom Penh

In most cities if you go on a movie star tour you’ll travel in a minibus with some dilettante chatterbox who’ll drive you past the gates of celebrity homes and favourite restaurants, but in the rapidly recovering Cambodian capital of Phnom Penh, you can actually go on a tour conducted by a genuine local movie star.

Talk about rags to riches. Sereyvath Kem, or just Srah to his mates, was standing on the corner touting for taxis when a movie crew came looking for some extras. Srah was chosen from a bunch of clamouring hopefuls to play the role of Sok, a local taxi driver in the film “City of Ghosts”. Directed by and starring Hollywood heartthrob, Matt Dillon along with James Caan and G©rard Depardieu.

If you’re travelling to Phnom Penh, go rent this movie first. Sure, the plot is a bit patchy but the casting, art direction and locations are genuine Phnom Penh. The proud, but crumbling French architecture, dusty streets and hurly burly is still intact some 12 years after the movie was shot.

I found Srah by tracking backwards from another local cast into the plot, Michael Hayes, an ex-pat American with no idea about newspapers who lobbed there in 1991 to start the Phmon Penh Post. Hayes, still the editor-in-chief, put me in touch with a shady-sounding character, Hurley Scroggins, who runs a well known little Mexican (yes, Mexican) restaurant, Cantina, a few doors down from the famous Foreign Correspondents Club.

“So you’re looking for Srah,” asks Hurley with a far-away sort of look, but picks up the cell phone all the same. “Srah, hi, yeah, there’s this journo here from ”“ where was it? – Australia wants to chat.”

So the next morning, Srah turns up on his moped, loads me on the back and runs me around Phnom Penh showing me the locations and reciting his lines.

“Here’s the spot where Matt gets beaten up and I pick him up and take him to the hospital.”

On location with Matt Dillon

This is great fun, but I’m more interested in Srah and his story.

Bright eyed, communicative and polite, Srah is now a healthy-looking 43 with a wife and two beautiful young children. He shows me the photos. But like so many Cambodians trying to create lives for themselves, there’s the unavoidable history of the Khmer Rouge from the mid-1970s.

Srah’s father, a doctor, was high on the target list for the despotic regime who sought to erase Cambodia’s history, especially the academics and educated class. They managed to avoid detection for a couple years, but eventually Srah’s father was arrested. The family disintegrated and Srah and his brother ended up in an orphanage for 10 years before he returned to Phnom Penh in 1990 looking for work. A stint with the military and later, the UN, taught Srah some international relations and languages.

For the rest of the morning, we tour around the streets with me hanging on the back of his moped. This is the real Phnom Penh, not some sanitised, air-conditioned tour bus with crisp-shirted guides and bottled water. As we visit more movie locations and I can’t resist the urge to recreate one of the iconic shots with Dillon in the front of the cyclo-cab. But first we have to hire a cyclo. Ironically Srah has never owned or worked with a cyclo and had to learn to ride one for his role. 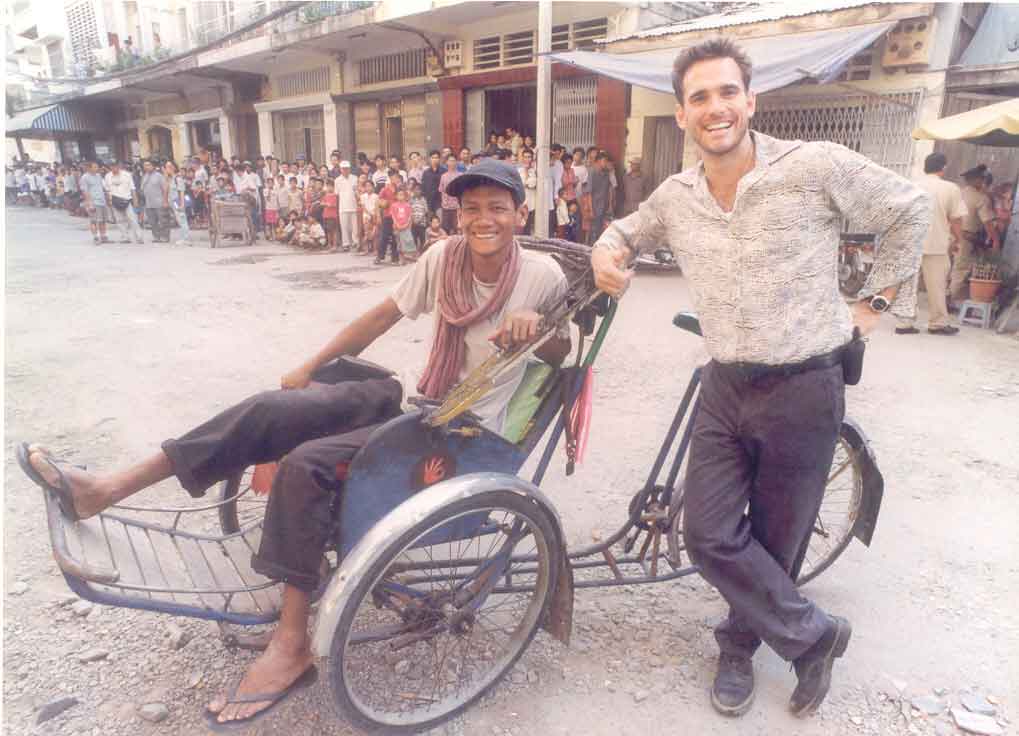 Thanks to the proceeds from Dillon’s film and an on-going trickle of movie work, Srah now owns a flat for his family and a shiny Toyota for high-end work. He still conducts tours around the city and even out into the rural countryside for those who want to see more through the eyes of a local.

“City of Ghosts” was never a box office blockbuster and Dillon never meant it that way. Instead it’s a gritty ‘art house’ adventure thriller with a sympathetic view of the the ordinary Cambodians struggling to make ends meet in a chaotic city. Critics were split, but the harshest criticism seems to come from those who’ve never been anywhere near Cambodia. They called it patronising and dehumanising, but Srah defends it

“Movies must sometimes tell people the truth, this is the way Cambodia is.”

If you’re looking for a tour with an interesting local twist, you can contact Srah for a reasonably priced, customised itinerary by e-mailing [email protected]

The author with Srah