Delhi Lockdown: Everything You Need To Know About the Curfew and Restrictions in Delhi

Even before Delhi could recuperate the initial hit of the pandemic, the second wave struck the capital city of India, causing a spike in caseload yet again. Taking the bull by its horn, the Delhi government had announced a state-wide lockdown since the third week of April.

Delhi has started the process of cautiously resuming activities that were stopped about two months ago. Here’s everything you need to know about this unlock and reopening: what’s open, what’s not, and who’s exempted. 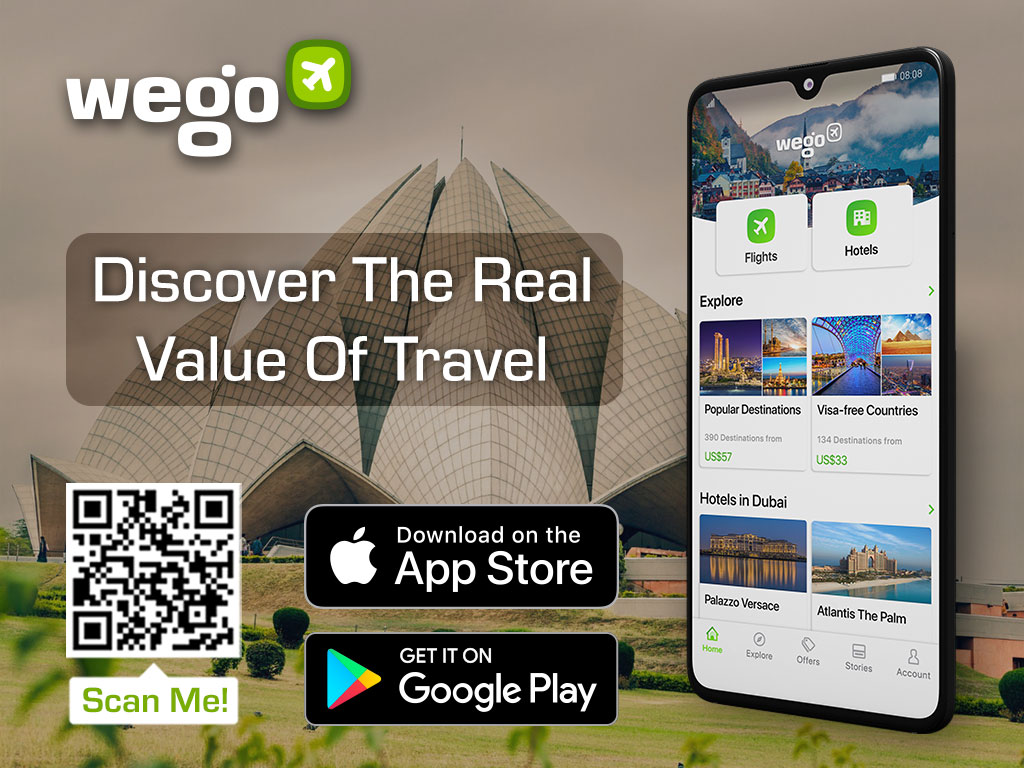 The lockdown restrictions in Delhi are being eased as the national capital sees a steady drop in the COVID cases.

As the coronavirus situation improves in the capital, more relaxations have been announced. The government has now released a graded response action plan, which harks back to a similar mechanism to fight air pollution during pre-winter months. This was drafted by an expert committee formed by the Delhi government and approved by the Delhi Disaster Management Authority (DDMA).

The Graded Response Action Plan classifies outbreak severity into four bands – yellow, amber, orange and red – with each representing a more severe outbreak and, thus, stricter curbs than the one preceding it. The colour-coded classifications take into account three factors: the test positivity rate over two consecutive days, new cases over a seven-day period, and the average weekly hospital occupancy rate. 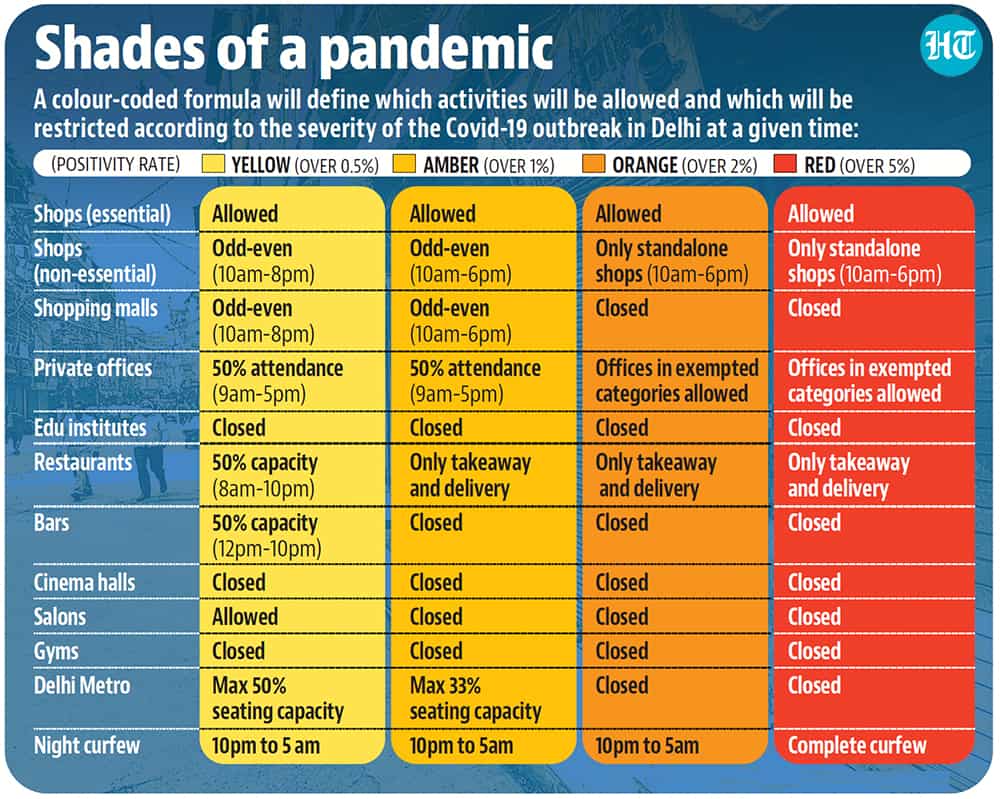 According to the plan the first of curbs are triggered when the positivity rate crosses 0.5%, or new cases over a week exceeds 1,500, or if there are more than 500 oxygen beds occupied on average over a seven-day period. Read along to know what the different colour codes mean.

Once any of the above mentioned thresholds are breached, the city is under a yellow alert mechanism in which non-essential shops are allowed to open only on an odd-even basis, a night curfew comes into force, and offices are required to move half of their staff to a work-from-home function.

If test positivity, case numbers and hospitalisations rise further, the amber alert comes into effect. In this scenario, some venues and activities are completely halted: parks need to close, barber shops cannot open, and dining in at restaurants will be prohibited (as will the opening of bars). Amber alert is when TPR rises above 1%, or if there are more than 3,500 cases over a week, or if oxygen bed occupancy surpasses 700.

The next alert level, orange, takes effect if TPR breaches 2%, the number of new cases in a week goes beyond 9,000, or if the average number of oxygen beds occupied over the week goes beyond 3,000. In this scenario, private offices, malls, Metro rail services and weekly markets will be shut down.

In the most severe red alert category (if TPR is above 5%, cumulative weekly case above 16,000 or hospital occupancy above 3,000), there will be a 24-hour curfew with people allowed outside only for essential services. In this scenario, all offices engaged in non-essential work need to shift to a completely work-from-home functioning.

Many activities are resuming in Delhi. As part of the unlock, the following activities can resume with certain restrictions:

Weddings in banquet halls, marriage halls, hotels, are allowed but only with up to 50 people. A maximum of 20 people can attend funerals.

What is closed to visitors/attendees?

Despite several relaxations, the government is yet to allow the opening of the following establishments:

Will transport facilities be available?

Transport services will be available but with strict caps on the number of passengers.

DDMA also discussed the situation outside stations of the Delhi Metro, marked by long queues due to a cap on the seating capacity at 50 per cent in each train coach. However, restrictions in the Metro will remain for until further notice.

Can you travel to/from Delhi during the lockdown?

Yes. There is no restriction on movement of people within Delhi or between Delhi and other states.

The new graded mechanism also makes it mandatory for incoming passengers in the national capital to produce a certificate of full vaccination (both doses) or a negative RT-PCR test report not older than 72 hours if Delhi is on red alert. People coming by air from states with positivity rate higher than 5%, or if they come by any mode of transport from a state with positivity rate is of 10% or more, irrespective of the alert applicable in Delhi, too, will be subjected to the same requirements.

People coming from a state where a new variant is found spreading, irrespective of the nature of alert in Delhi at that point, will also need to show vaccination certificates or a negative test.

What is the Delhi e-Pass and who needs it?

E-Pass is being issued for those who are engaged in providing essential services, but do not have a valid(/Government) ID. The process of obtaining a Delhi e-Pass is quite simple. Just follow these steps.

Those who are travelling in the National Capital Territory, i.e from Noida/Ghaziabad to Delhi, will also need an e-Pass issued by the Delhi government. 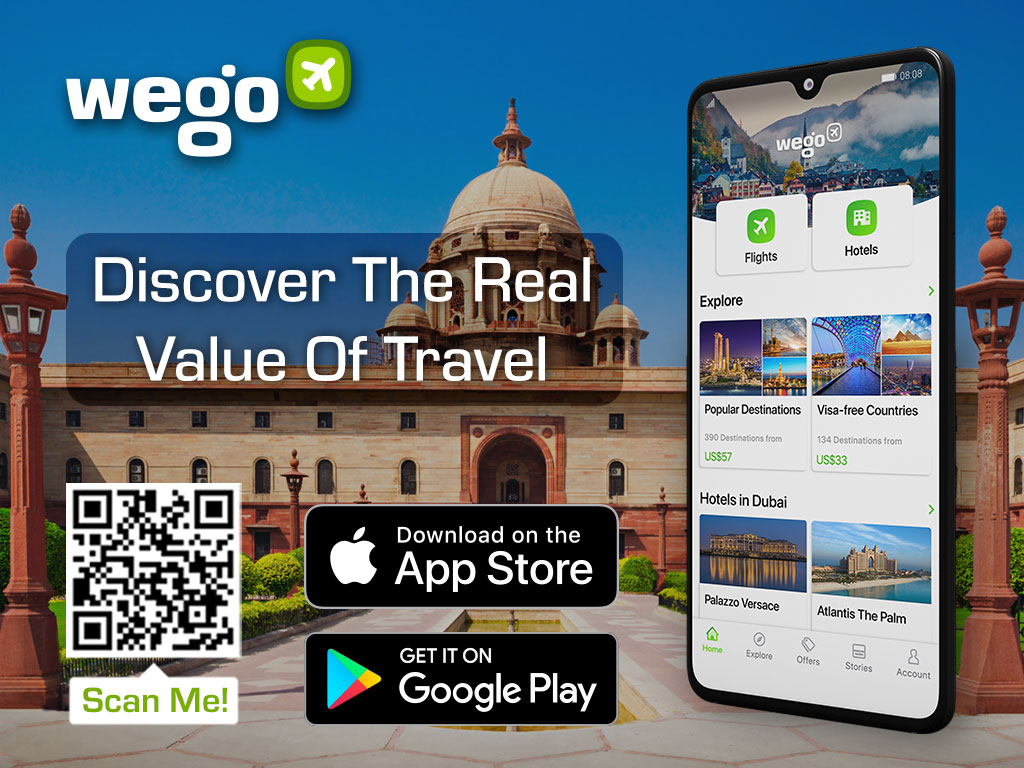