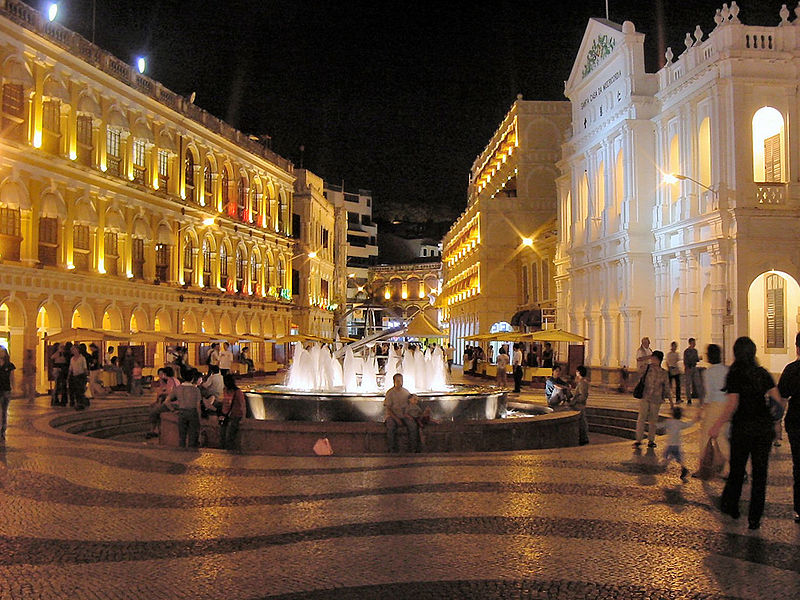 Nobody is really sure when the Temple of A-Ma, the oldest of its kind in Macau, was built, but it’s estimated around 1488.  Dedicated to the wonderful story of a young girl refused carriage on a boat by all but one kind fisherman, who were subsequently the only survivors of a freak storm, led to the girl A-Ma becoming a legendary goddess of the sea.  The city name was derived from ’A-Ma-Gau’, the temple’s original name meaning ’Bay of A-Ma’.  Built on the tip of the peninsula the temple represents the multitude of cultures that stopped to pray to their respective faiths, evident from pavilions dedicated to Confucianism, Taoism, Buddhism and other beliefs. 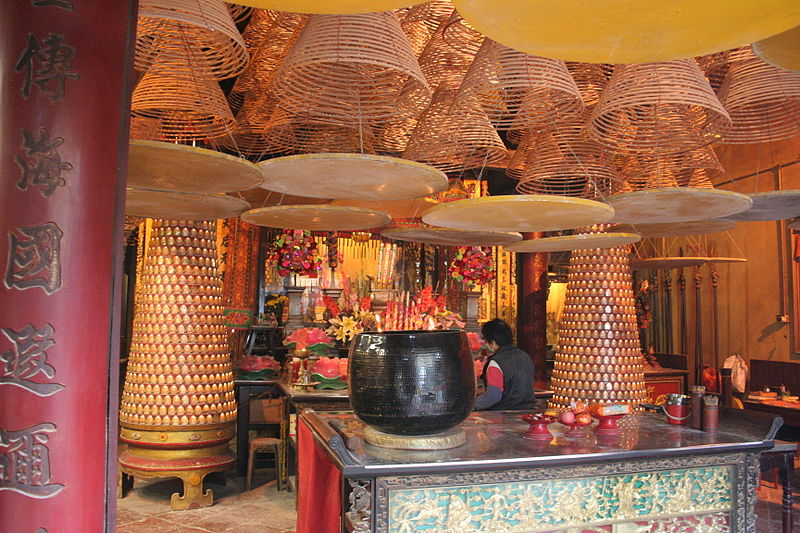 Inside the A Ma Temple

Macau is now a booming centre of entertainment undergoing rapid land reclamation as the tiny 25 square kilometre region has attracted global investment in casinos and integrated resorts of astounding size and quality.  The new Macau is intoxicating and magnetic as each new property scrambles to outdo the other in a vigorous amelioration of Asia’s gaming capital.

The two sides of Macau while an antithesis of each other coexist quite nicely.  It’s quite clear where one begins and the other ends, however the historic centre of Macau, much of which is now Heritage listed by UNESCO, is in danger of being overlooked by the excited tourist with change in their pockets.

Weaving through what’s known as Macau’s Inner Harbour is an array of churches, seminaries and temples, which stand as beacons to the rich history of the once sleepy port city.  It’s difficult, in today’s modern world to take in the tangle of laneways lined with shops and tea houses amidst a stunning combination of ancient Portuguese and Chinese architecture, and believe you haven’t stepped into a time machine.

Due to its central location along ocean trade routes the small peninsula was continuously under threat of invasion by pirates and other European communities looking to colonise the port.  The Portuguese after successfully fighting off a Dutch attack, made a deal with the Mainland to protect the enclave to which they agreed and gave them administrative control. 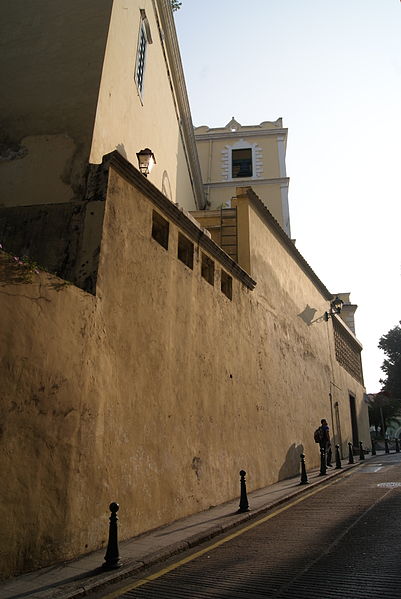 Accordingly many old forts, barracks and walls in the old Portuguese style have gracefully withstood the ravages of time.  The area around Ponte 16 was the epicentre of urban life up until the 1970’s when textiles and other industries replaced trade and fishing as the major source of commercial operations.

Built in 1622, the S£o Tiago da Barra Fortress near the Temple of A-Ma, is entered via a stone carved tunnelled stairway where natural spring water from deep inside the rock face still flows on either side.  The fortress once guarded the entry to the Inner Harbour and is now a small hotel, the Pousada de Sao Tiago, and afternoon tea on the terrace at dusk, watching returning fishing boats is a delight.

Today the urban centre of Macau is nestled a little farther up the road, at the charming Leal Senado Square, teeming with tourists and shoppers.  Often the first on the list of places to see, San Ma Lo as locals refer to it, is a chronicle of Macau’s colonisation.  Starting at Avenida de Almeida Ribeiro, its swirling mosaic piazza is encircled by pastel neo-classical buildings with modern retail outlets squeezed in beneath.  Once you reach the Ruins of St Paul’s, the fa§ade of a 17th century church destroyed by fire in 1835, take a left turn and wander down ’furniture street’.  Stepping off the tourist treadmill, take a deep breath and marvel at the gorgeous reproductions amidst genuine antiques packed into a multitude of stores and enjoy a few moments barter.  Further on and shadowy remains of houses long gone are etched on sides of walls still standing, like pictures on a film negative. 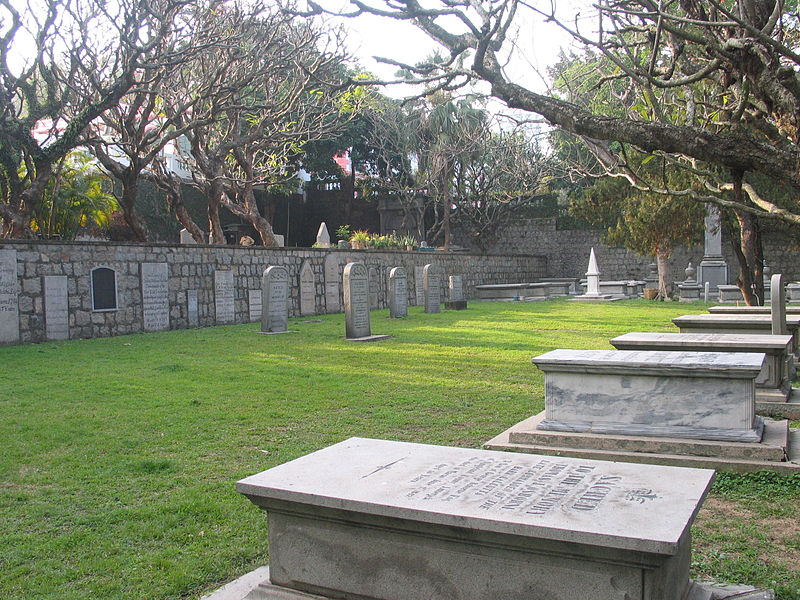 The road leads to the Praca Luis de Camoes, a stunning garden dedicated to Portugal’s answer to Shakespeare, the poet Camoes, and to the right, the Old Protestant Cemetery.  Western visitors who succumbed to all manner of misfortunes on their journeys from the 1700’s lay at rest beneath sprawling ancient trees in this untouched homage to adventurers of old.  Hand etched tombstones dedicate the memory of officers of the East India Company and Protestants from the United States and Britain.  One can’t help become thoughtful at inscriptions like, ’the East Indiaman who after a long and painful illness which he bore with the utmost fortitude departed this life aged about 24 years in 1787’.

Running directly adjacent to Leal Senado square, Rua dos Mercadores fronts a maze of laneways riddled with quaint shops and bustling locals.  As the road forks at Kwan Chin Gai, a small plaza appears and ’most’ afternoons you can find an array of locals squatting on small boxes overlooking their wares laid out on old sheets in an authentic bazaar setting.  Bargaining with elderly Chinese who don’t speak a word of English is a blast!  They are tougher than you think, just remain respectful, with a few laughs thrown in and you should walk away with a treasure you’ll not find in any shop in the city.  Along with the obligatory battered pots and pans, you can find some glorious old coins, brass Buddha’s, classic stone bracelets and camphor wooden boxes. 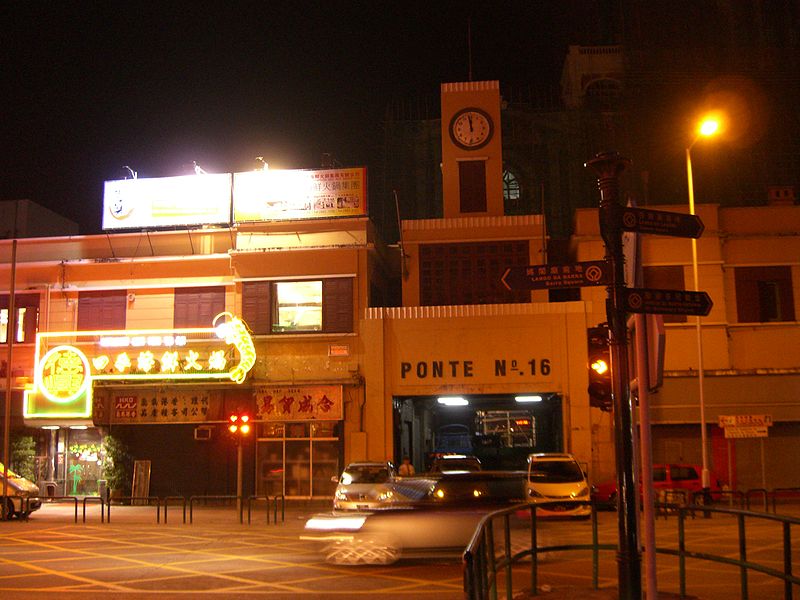 Take some time to explore the tiny laneways around Ponte 16

Perhaps the most well preserved road in the Inner Harbour is the Rua Cincode Outubro that runs right off the Avenida de Almeida Ribeiro.  Set back from the main roads these tiny alleys are preceded by crumbling archways, which once announced the neighbourhood entrance.  Once the most prosperous area due to its close proximity to Ponte 16 the streets are still frantic with life, although rarely explored by tourists.  Each shop history can be traced back almost a hundred years and still managed by a long line of family generations.  One of the first has been a famed Chinese tea trader since the early 1930’s, and three stores on, a rattan basket weaver from the same era is still in business.  Its another snapshot into days gone by as an eighty year old incense shop, a major trade long ago, continues into the 21st century.  The Chinese medicine shop and legendary Chinese BBQ Pork Chop store are precious.

The legacy of Portuguese colonisation is clearly visible today in beguiling architecture and it’s a photographers dream.  Put on comfy shoes and get lost in Macau’s Inner Harbour, you can hit the casino’s later.

Get the best accommodation and flights to Macau.