Flowing through Thailand’s Kanchanaburi Province, the river Kwai has seen its fair share of history.

Nearly 70 years ago in October 1943, the infamous ’Death Railway’ between Thailand and Myanmar reached completion. 415 kilometres of track, marked by terrible human toil and suffering through mountainous terrain, was laid in approximately sixteen months.

The Japanese needed a railroad to haul war-making supplies from Ban Pong, Siam (Thailand) to Thanbyuzayat, Burma (Myanmar). They were willing to sacrifice just about anyone to get it built, rushing its construction beyond reason. Shortcuts were taken at every turn. For instance, 688 bridges were built but only 8 were made of steel and concrete. Given the tropical climate and propensity for wood to rot quickly was this planned obsolescence or simply crazed expediency?

Though travellers to this region will see an emerging refocus from World War 2 remembrance to eco-tourism, anyone visiting Kanchanaburi town will undoubtedly be reminded of how vital the railroad’s demise was to the end of Japanese plans for imperialism in Southeast Asia.

Bridge over the River Kwai at Kanchanaburi

Day trippers from Bangkok tend to focus on the reconstructed bridge on the river Kwai at Kanchanaburi (the original Japanese bridge was successfully bombed and destroyed), the War Cemetery and nearby private JEATH museum. The acronym JEATH represents Japan as the controllers of the railway project and the five countries: England, America and Australia, Thailand and Holland involved in its construction. The simple displays commemorate lives lost, depicting a realistic POW hut while retelling personal stories behind the dreaded railroad. The museum is managed by the Wat Chaichumpol temple and was founded in 1977 by the chief abbot Venerable Phra Theppanyasuthee.

The drive from Bangkok can take up to four hours each way making for a very long day trip from the capital. I don’t recommend this option. It’s far better to allow at least a few days exploring the region.

Arriving at Wan Po aboard the train

A popular side trip is a ride on the old railway between Kanchanaburi and Wang Po. The trip takes approximately two hours travelling through flat fields of tapioca trees and rice paddies before arriving to Wang Po and its picturesque position on a ridge above the river. A POW built cutting in the mountainside and trestle over the river remain as contrary testament to masterful engineering and obvious hardship endured by slave labourers.

This is as far as the railway extends these days. The short-lived Thai-Burma Railroad was obliterated before the end of World War 2 and has not been rebuilt.

Approximately two hours drive further northwest of Kanchanaburi town is the Hellfire Pass Park. Here the Thai government has set aside a large swathe of forested land encompassing the old rail bed. The visitor’s centre and museum is well designed, guiding visitors from the earliest inception of the Thai-Burma Railway and its brief but horrendous existence under Japanese control to its ignominious conclusion. 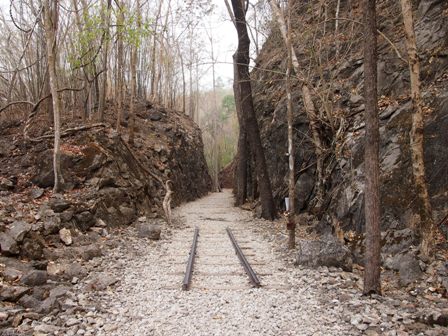 A walk through Hellfire Pass is humbling. Most visitors stop at the end of the Hellfire Pass cutting and return to the centre, just under a two kilometres walk.

Much more compelling is this option. Walk to the end of the track, approximately five kilometres. See what building this track of tears was really like for the slave labourers who lived in decrepit huts far down in the valley near the river. They walked up the mountain each day, worked twelve hour shifts in appalling conditions, subsisting on rice gruel while hauling stones up and down near vertical slopes. After a killing day’s work enduring unspeakable cruelty from their captors, they retraced their steps back down the steep mountainsides in the dark.

Over 100,000 workers and over 16,000 POWs died. Seeing the railroad from this perspective won’t ever let you forget that fact.

The hike is worthwhile. Remember to arrange transport from the end of the track or be prepared to return the same way, some ten kilometres and not recommended without water and food. The hottest time of year, April until July would be intolerably sultry. During monsoon, August until November, the track may be closed because of flooding.

Exploring the region at a more leisurely pace, preferably staying in one of the delightfully isolated river raft camps up the Kwai near the Myanmar border, only ten kilometres away as the crow flies, allows enough time in which to combine a visit to the Hellfire Pass Park and the entirely different experience of rural river life.

Tourism on the river Kwai these days is shifting towards eco-experience.

The ethnically unique Mon people, whose language is completely different from Thai, dominate the ethnic mix of people living closest to the border. Having settled in Thailand from Myanmar to find more secure livelihoods, their lives have mostly improved economically. 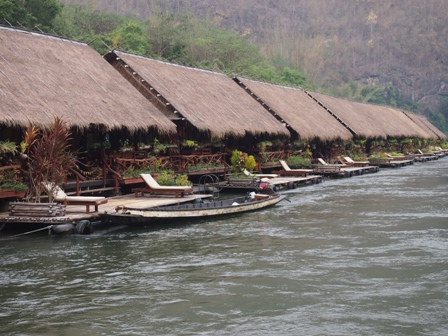 The River Kwai Jungle Raft camp is essentially a series of floating rafts moored permanently near a forested riverbank. Private rooms are affixed to separate sections of the rafts. Connected by shifting bridges, each raft is wide enough for shared verandas just outside the front door and small private verandas outside the back door. Rooms are self-contained with a small bathroom featuring a… shall we say, refreshing cold shower. There is no electricity. You get one kerosene lamp and a tiny torch attached to the room key.

Surprisingly, no rooms have been burnt to the water line, or so I hear. Fire extinguishers are thoughtfully provided nonetheless.

Invitingly looping hammocks feature throughout the public areas along with copious numbers of flower pots, chaise longues and shady verandas.

A larger central raft serves as the lobby and reception. Attached is a bar with a combined undercover and open air dining area. Another undercover annex serves as a kind of communal massage area. Massages are inexpensive and enthusiastically executed albeit in very plain view. 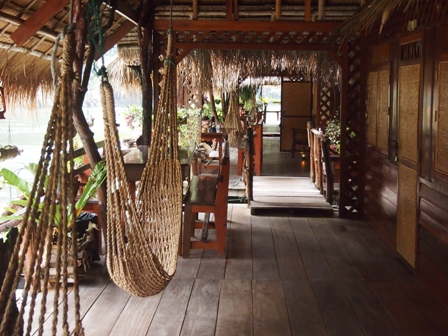 Rustic yet alluring verandahs at the Jungle Raft Camp

The whole kit and caboodle is undeniably alluring. The lack of electricity (no bedside reading lamp, late night showering made more challenging without hot water, stumbling around in the dark on rocking planks tied together, you get the  picture) may put off guests used to basic necessities but if you’re willing to ’rough’ it, the camp delivers an altogether magical experience.

My first night was almost sleepless. I couldn’t get used to the noise of water constantly rushing just beneath me, banging together the collection of wooden rafts sounding like a bamboo xylophone played loudly by a tone deaf sadist.

By the second night, I’d grown accustomed to unusual nocturnal perturbations and slept like a floating log.

Dawn on the river is beautiful. Mon people who work at the camp and live in the adjoining village maintain elephants as company and a source of added income for tourists coming along for the paid ride. Each morning I was fully awakened by the familiar hoots and trumpeting of elephants as they came to bathe outside my back door. 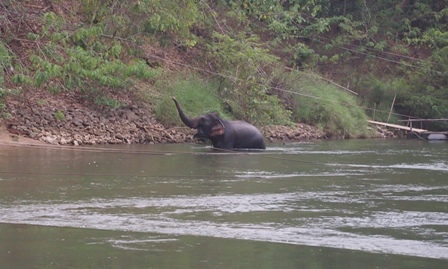 A local takes to the water

The village is well worth visiting. No electricity here either, though solar generators power computers and tiny televisions. I was told the Wi-Fi connection was adequate if regularly interrupted. A cooperatively owned small crafts shop selling intricately designed Mon fabrics, sarongs being the top sellers, is open most days until dusk. The elephant training camp and village school make for contrasting neighbours, children and elephants alike learning to interact politely with tourists. A soccer pitch typically occupied by boys kicking goals is a short walk from a small Buddhist temple secreted into the forest.

An  adjoining communal home for the monks is built in the open traditional style without windows. I spied a young monk apparently lost in his thoughts walking on its upper level from room to room. Is there such a thing as sacred voyeurism?

The idyllic scene described above obscures a present political reality. The majority of Mon people living in these parts are confined to Kanchanaburi Province. They are not allowed to live elsewhere in Thailand while their movements within Thailand are also restricted. Police roadblocks commonly seen during drives around the province are intended for non-compliant Mon people leaving the region without official permission.

After breakfast we hop on a long-tail boat motoring downriver to re-enter the contemporary world, a half hour ride past towering cliffs, mist rising gently off the deep Kwai, which invariably poses a shock to my river-lulled system.

World War 2 historic sites aside, exploring Kanchanaburi’s other attractions poses limitations. This is not the Thailand of beach resort towns packed with endless strips of shops, cafes and restaurants. Nor is it replete with significant Buddhist temples such as at Sukhothai or Ayutthaya. This is rural Thailand. Tapioca plantations and rice paddies intersperse with forested mountains and tiny villages.

Rafting on the River Kwai

Choose a river rafting trip, floating on bamboo logs strapped together with rope for a near immersion experience or opt for an elephant encounter, sharing a bath in the river or an amble through the jungle. These two optional extras are the main alternatives to World War 2 memory trips.

Not far from Hellfire Pass Park is the Sai Yok Noi waterfall. Adjacent to the main road that links Kanchanaburi to the border, access is very easy. A fifty metres walk will see you standing in front of a small pool at the base of a pretty waterfall. Not quite off the beaten track but neither is it on one. A strip of curio shops and takeaway joints stand opposite the waterfall, looking very much like tacky Thai style Niagara.

Downriver a short distance from the River Kwai Jungle Raft camp, up a steep ascent perched above a more upmarket neighbouring river raft jungle camp (larger rooms on bigger rafts with electricity) is the Lawa Cave. Pay a small entry fee from an office situated at the track’s base otherwise the caves lights will remain turned off. Even so, remember to bring a torch if you intend exploring this dark place. Not being a keen spelunker, I found the cave only mildly interesting. A tiny Buddhist shrine is secreted into a small chamber just inside the entrance. Further in are much larger chambers, some with resident bats whose squeaks provided the only sounds within. The cave is mostly dry apart from the two deepest rooms where steadily dripping water continues to create stalagmites and stalactites.

Local children enjoying the pool at the foot of the waterfall

The river Kwai, Kanchanaburi and the Mon people portray a fascinating admixture of today’s Thailand with strong links to wartime memories.

For anyone keen to learn more about how Thailand manages to blend recent history, shifting society and a preserved environment in a contemporary setting, this is as good a place as anywhere in which to make a start.

Wego’s guest contributor, adventurer Tom Neal Tacker writes for a number of publications and for his blog at Naked Hungry Traveller. Tom travelled as a guest of the Tourism Authority of Thailand and Thai Airways.