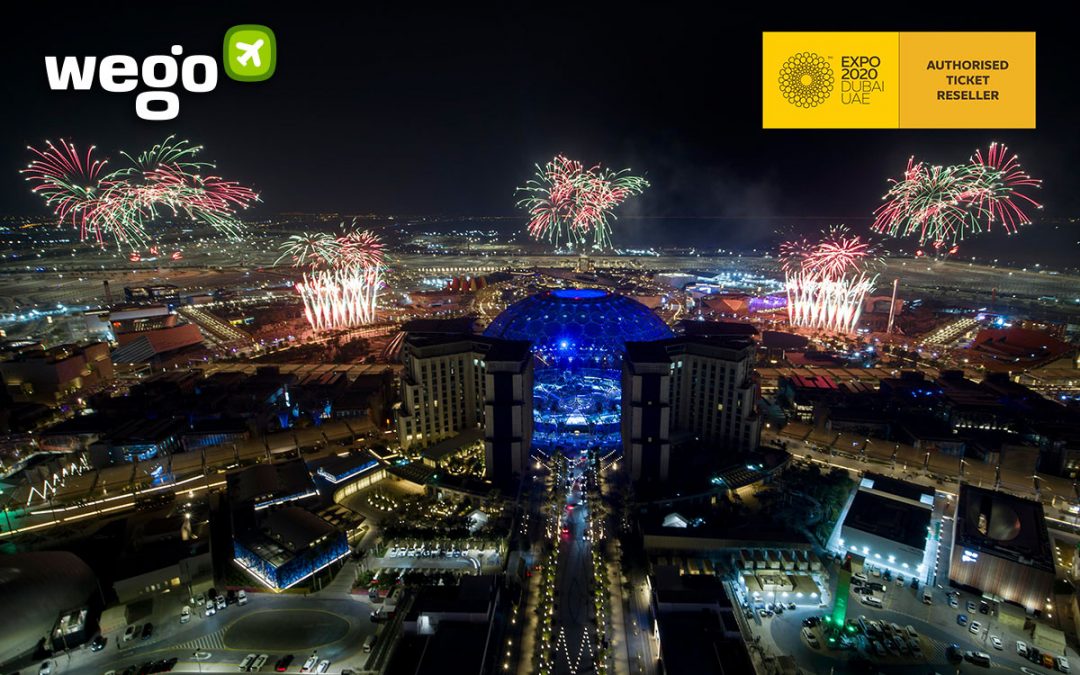 At long last, Expo 2020 Dubai has now been officially opened! On 30 September 2021, Dubai warmly greeted the world by way of Expo 2020 opening ceremony broadcasted live to 430 locations across the UAE and screens in New York’s Times Square.

The Crown Prince of Dubai, His Highness Sheikh Hamdan bin Mohammed bin Rashid Al Maktoum, officially announced the opening of the first World Expo in the Middle East in an opening ceremony defined by dazzling projections and lighting effects in Al Wasl Plaza; a futuristic dome-shaped enclosure serving as the grounds for the opening ceremony of Expo 2020 Dubai.

The UAE welcomes the world 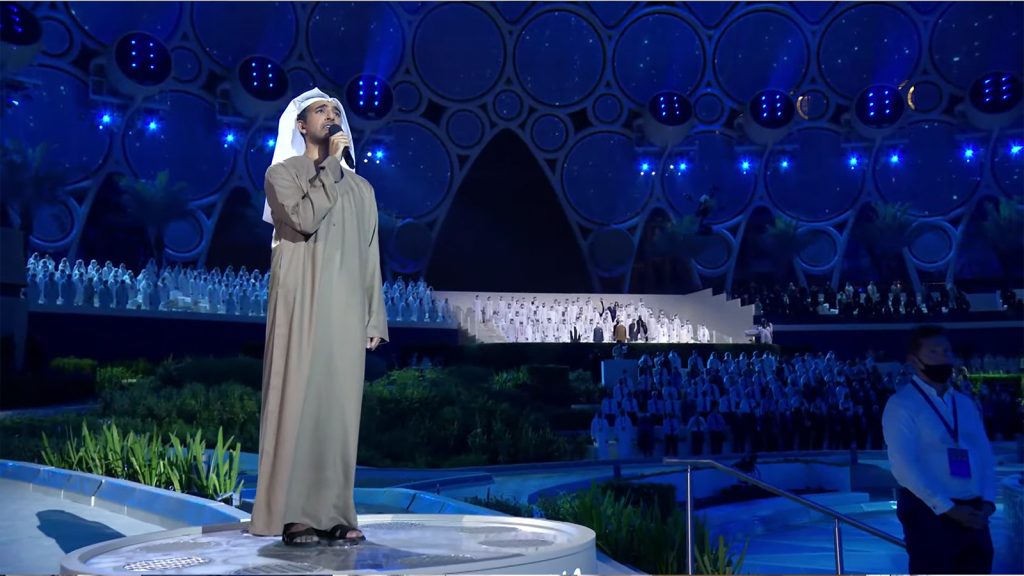 The opening ceremony kicked off with the performance of Emirati singer and actor Rashed Al Nuaimi performing the UAE national anthem as the national flag is hoisted accompanied by a red, green, and white fireworks display.

Next, an opening sequence featuring sand dunes made out of 84 meters of fabric conveyed the philosophy behind the Expo 2020 Dubai logo. An Emirati girl dressed in traditional garments made the discovery of a golden ring connecting the past to the present; the golden ring of connectivity. 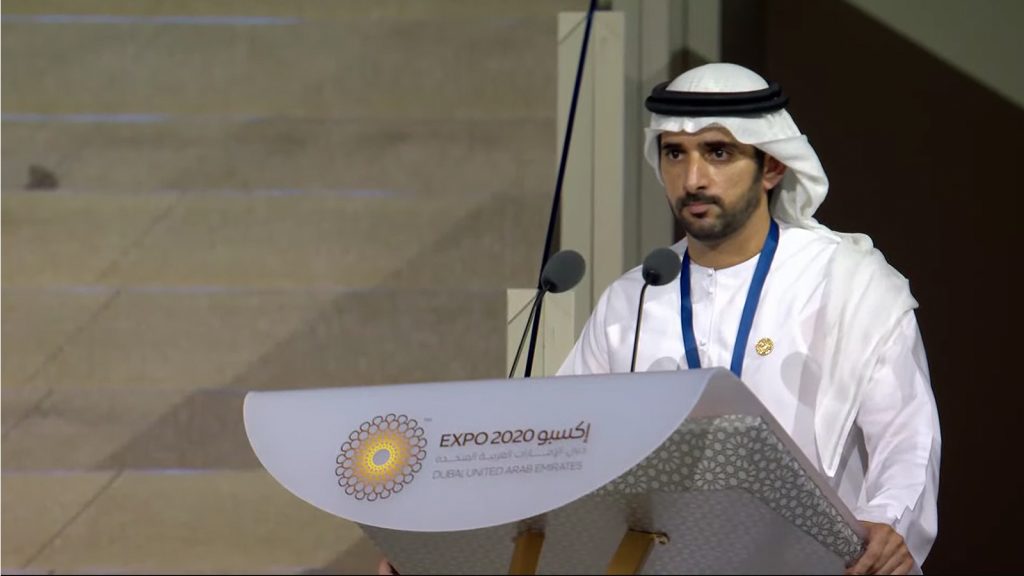 The discovery of the golden ring prompted the performance of Angelique Kidjo and Saudi superstar Mohammed Abdu as the entirety of 191 participating nations’ flags took to the stage.

Following the entrance of the flags representing all the participating nations, His Highness Sheikh Hamdan bin Mohammed then officially declared the opening of the world expo by offering a solemn prayer stating, “Today we witness, together, a new beginning, as we inaugurate, with the blessings of Allah, Expo 2020. May God grant us success.”

This is Our Time 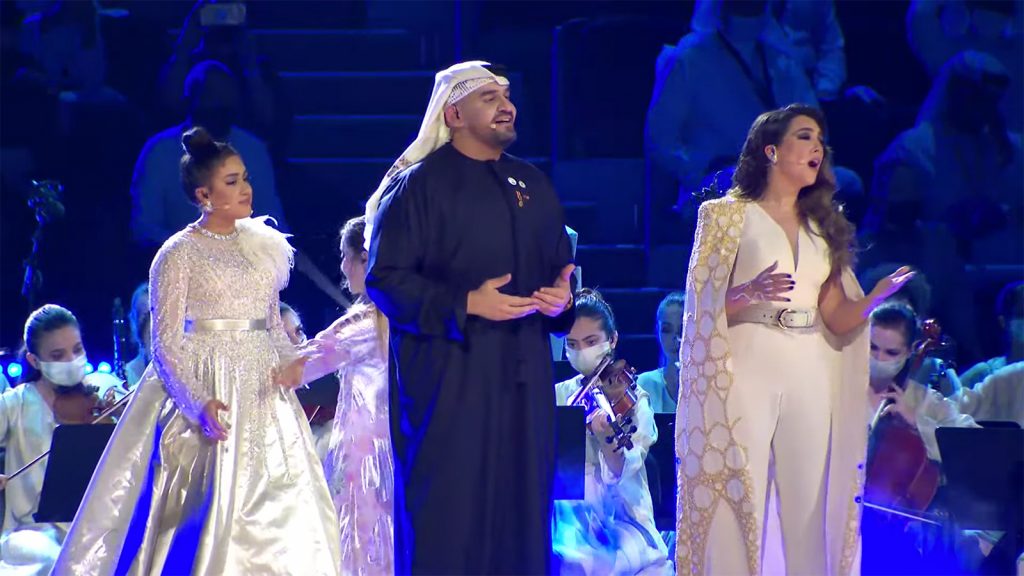 The official theme song of Expo 2020 Dubai, This is Our Time, echoes within the Al Wasl dome by way of the world’s biggest sound system. The theme song appealed to the Expo’s wider themes of opportunity, sustainability and mobility.

The performance was followed by a series of speeches by a number of key figures of the world event, including His Excellency Sheikh Nahayan Mubarak Al Nahayan, Dubai Commissioner General for Expo 2020, Dimitri Kerkentzes, Secretary-General of the Bureau International des Expositions, the organization in charge of overseeing World Expos, and His Highness Sheikh Hamdan bin Mohammed bin Rashid Al Maktoum, Crown Prince of Dubai. 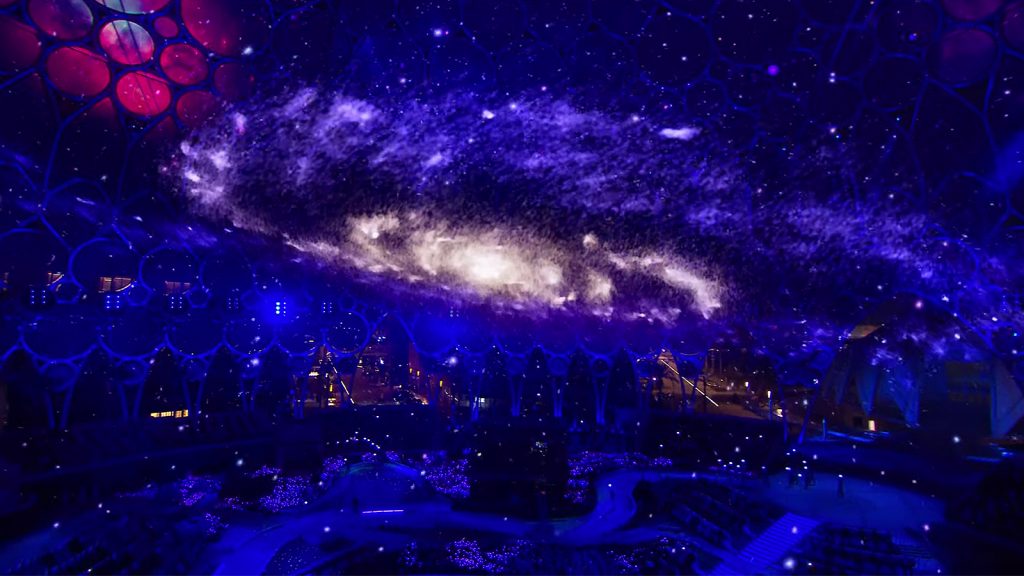 In addition to the world’s biggest sound system, the Al Wasl dome also made use of its 152 projectors positioned in key points throughout the enclosure. What came next was nothing short of a spectacular display of the story of our planet.

The show commenced by portraying the birth of our planet as a radiant orb of fire, to which it transitioned into a blue and white sphere and finally a brilliant pearl descending into the endless blue.

Each segment of the illuminating show was complemented by world-renowned artists, starting with the Chinese concert pianist Lang Lang.

As the stars faded to blue and an underwater sequence with brilliant tropical fish, turtles and, a giant whale materialized, the dazzling light show revealed the world fair’s intentions of living in harmony with nature and sustaining life, perfectly highlighting one of the themes of Expo 2020 Dubai. 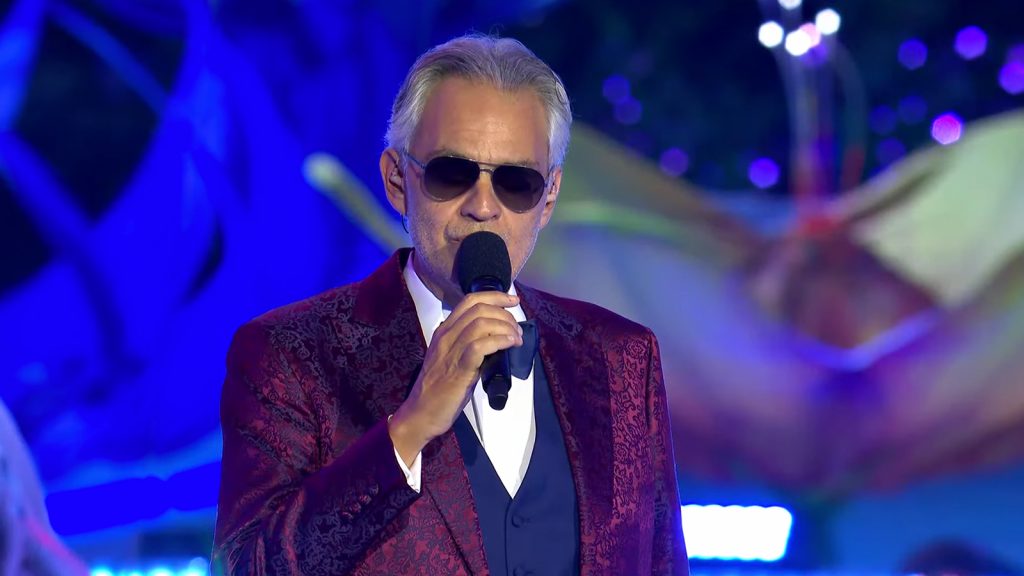 Ellie Goulding then took to the stage and performed a song called “Anything Could Happen” accompanied by floating clouds to the bewilderment of spectators.

Golden Globe winner Andra Day also made her mark in the opening ceremony by performing her Grammy-winning song “Rise Up.” The rest of the cast formed a caravan of humanity which represented humanity’s innate potential of creating a better tomorrow.

Finally, the Al Wasl dome underwent a seamless transformation into a magical garden with dancers dressed in colorful costumes recreated the blossoming of countless flowers. The final performance also highlighted a silver and white ghaf tree, which is the very symbol of the UAE, as the great Andrea Bocelli recited his prayers in the form of a song.