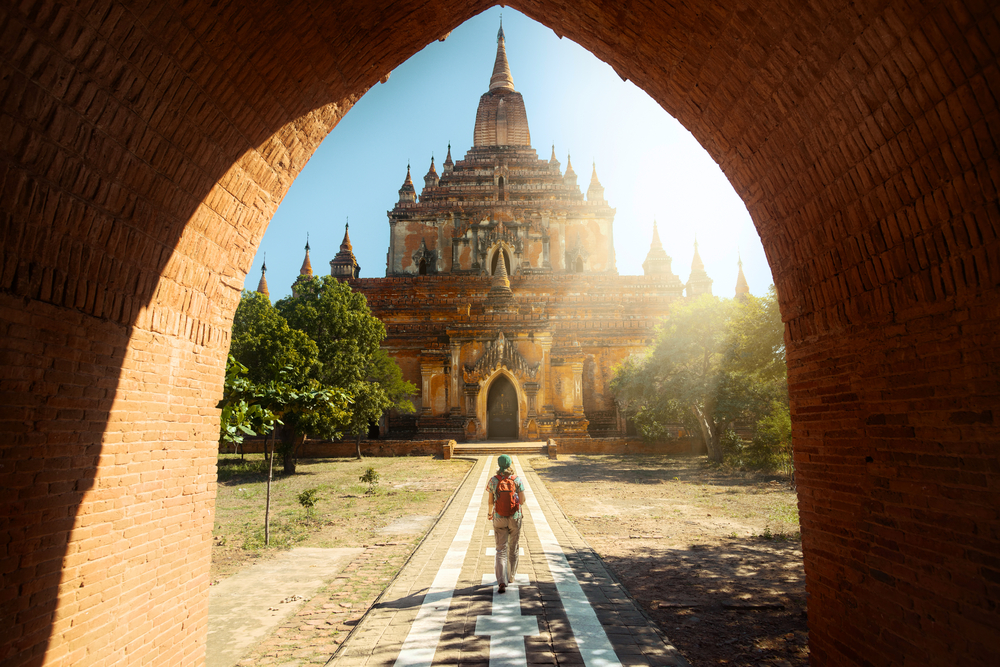 It was a wet July afternoon about 3 years ago.

I would always remember this sight at the back of my mind. Shops were closed and livelihoods were halted. A few boats were set up to chauffeur locals across the streets. Children were playing and laughing under the rain- a pure mirth not seen so often nowadays.

And there he was, walking towards me in his orange robe, with a smile of compassion on his face. It struck me as he appeared out of the blue with a surging calmness. His energy was emanating from afar. In him, I saw a profound beauty, a deeper wisdom.

I saw the calmness in the flood.

I was in an ancient historical city in the Mandalay Region of Myanmar called Bagan. We had been on our e-bikes for the past few days exploring various temples and stupas, and chasing stunning sunrises and sunsets in Old Bagan.

Being someone who isn’t fond of celebratory moments, it was a yearly tradition that I would “escape” on my birthday to a foreign land. That year I had chosen to quietly make a solo trip to the Land of Pagodas — Myanmar.

It was unquestionable that Bagan was a hugely spiritual and religious site of Myanmar with more than 3500 stupas, temples and monasteries. This historical ancient city was recently inscribed as a UNESCO World Heritage Site.

As someone who has always been drawn to historical and spiritual sites, I felt a calling to visit this ancient city.

Though it isn’t often recommended to visit during the rainy months from June to September, any chance of rain was, on the contrary, a big inducement for me in choosing that destination. I have always been drawn to the off-beaten path, if not otherwise, the off-season.

Enjoying the first daylight under a stupa — sheltered from the downpour with quiet appreciation — on my birthday sums up my love for the rain.

“I have not booked anything for the night too.”

The above was my first sentence to my newfound American and British friends. We had met at Aung Mingalar Bus Station in Yangon as we traveled on the same bus for our 10 hour journey to Bagan. Knowing that they too had nothing planned for their trip, I decided to join them.

I was not meant to spend my birthday alone after all. Before dawn each day, we set off with our e-bikes to prominent, unnamed pagodas to catch the sunrise. The smell of the soil mixed with morning dew that dripped from trees was something I would always remember.

“We have an amazing idea for our last day in Bagan,” said Gaby.

Gaby and I flicked a mischievous smile at each other when we shared the plan with our friends for what we had in mind for our last day together. We wanted to explore and witness the true Burmese lifestyle in the next town on the outskirts of Bagan.

Our guesthouse explained to us the limitations of our e-bikes but the adventurous souls within us knew we would do it anyway despite the blasphemy of the plan.

Our day trip to Pakokku across Irrawaddy River began with three e-bikes for four of us but ended with two and a half e-bikes, as one of our e-bikes was zeroing on its battery. The thought of hitchhiking with our e-bikes back to Nyaung U was on the top of our mind.

The unsettling drizzle and terrible language barrier did not help our plan too. Very often in our journey, we were greeted by very genuine smiles and the occasional “Mingalabar!” in the villages we rode past.

That summed up the reason why we had chosen to leave the tourist path for a day. Our guesthouse was not very pleased as all of us ended pushing our e-bikes back to our place. It was all well-handled with an extra tip.

What began as a solo affair for deep reflection and a completely non-celebratory birthday turned out to be full of laughter with newfound friends, a surprise celebration under the heavy downpour and an adventure we could only have dreamed about had we not met.

Exactly the way I imagined my trip to be.