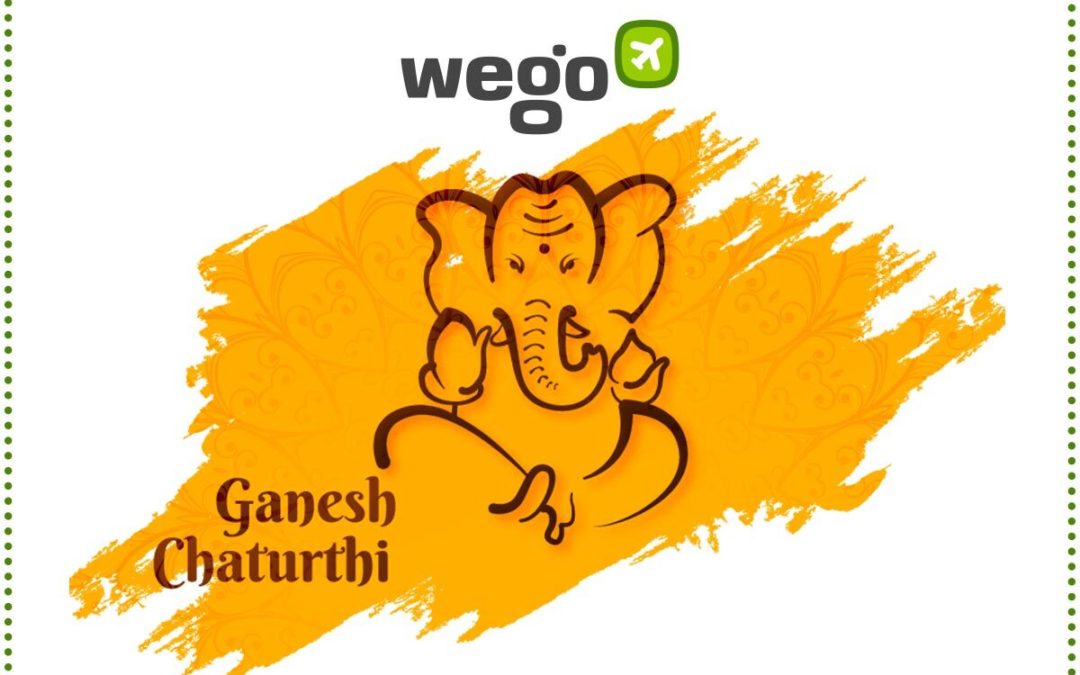 This article is reviewed & updated annually by Wego’s editorial team to ensure that the content is up to date & accurate.

One of the much-awaited Hindu annual festivals is Ganesh Chaturthi, an observance honouring Lord Ganesha, the elephant-headed deity. The eldest child of Lord Shiva and Goddess Durga, Ganesha is also named Ganapati or Vinayak. He is revered as the deva of intellect, the messiah of people from distress, and a patron of art. He is the one with the tusk, Ekdanta, and the face of an elephant, Gajanana.

According to the Hindu Purnimata calendar, the celebration takes place on the Chaturthi of Shukla Paksha in the month of Bhadrapada, meaning, the fourth day of the fortnight between the new moon and the full moon of the lunisolar calendar’s sixth month Bhadon. Animated rituals, prayer offerings, extravagant embellishments, and sweets, with various public performances span over nearly 10 days. At the end of this period, the visharjan or idol immersion takes place. 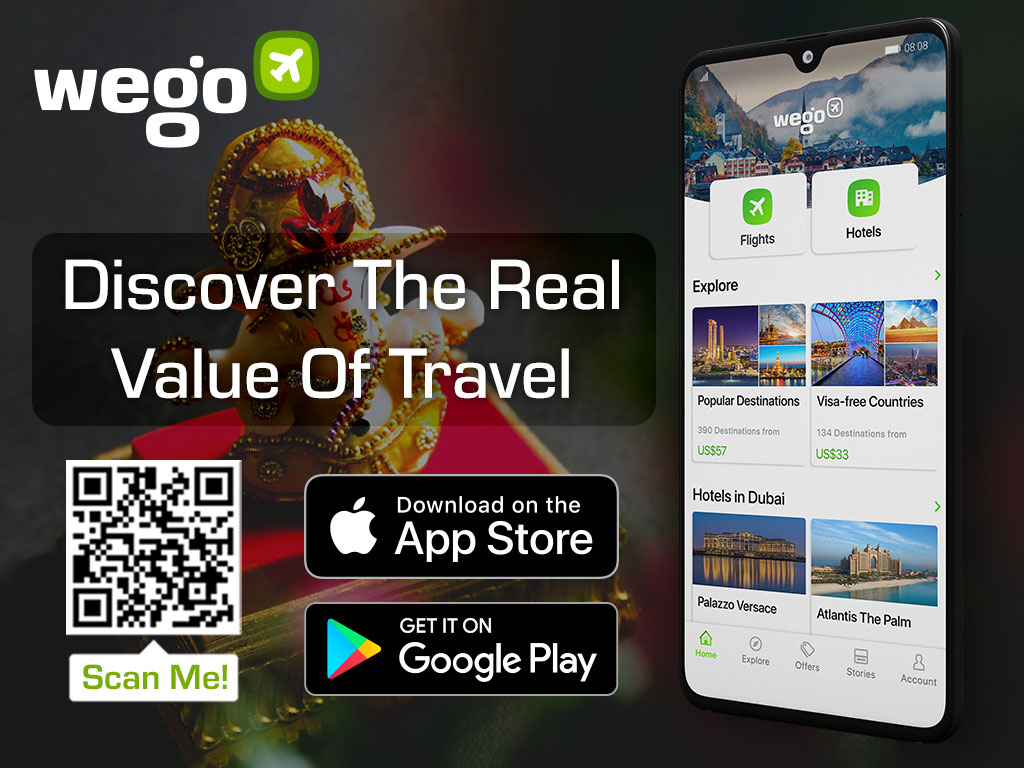 For the year 2022, the Ganesh Chaturthi falls on 31 August, Wednesday (Drikpanchang).

The muhurat or the auspicious moment for puja is, however, different across cities in India:

The festivity of Ganesh Chaturthi ends after 10 days on Anant Chaturdashi which is also known as Ganesh Visarjan day. On Anant Chaturdashi, devotees immerse the idol of Lord Ganesha in a water body after a gala street procession.

How is the festival celebrated?

Ganesh Chaturthi is celebrated in homes, at temples, and also in public spaces where huge decorative pandals or mandaps are structured to house the clay idols of Ganapati. In homes, people install small clay statues or place a picture of Lord Ganesha at the entrance, hoping for an obstacle-free and lucky new beginning.

For public celebrations, funds are collected and pandals are built. Beyond the religious significance, this sees a spur of cultural activities. Singers and theatre artists perform on stages on one side and simultaneously, most places also see blood donation camps, free health check-ups, donations, and food distribution among the poor.

Aarti songs or bhajans dedicated to the Lord reverberate in the air. In many places, you’d also feel like dancing in devotion as Bollywood numbers like Deva Shree Ganesha or Sadda Dil Bhi Tu (Ga Ga Ga Ganapati) blare through the speakers. Post the 10th day, the idol is taken out on a procession and immersed in a nearby waterbody. There’s a whole lot of singing, dancing, and chanting ‘Jai Ganapati!’ that goes on during Visharjan, making it one gala affair. 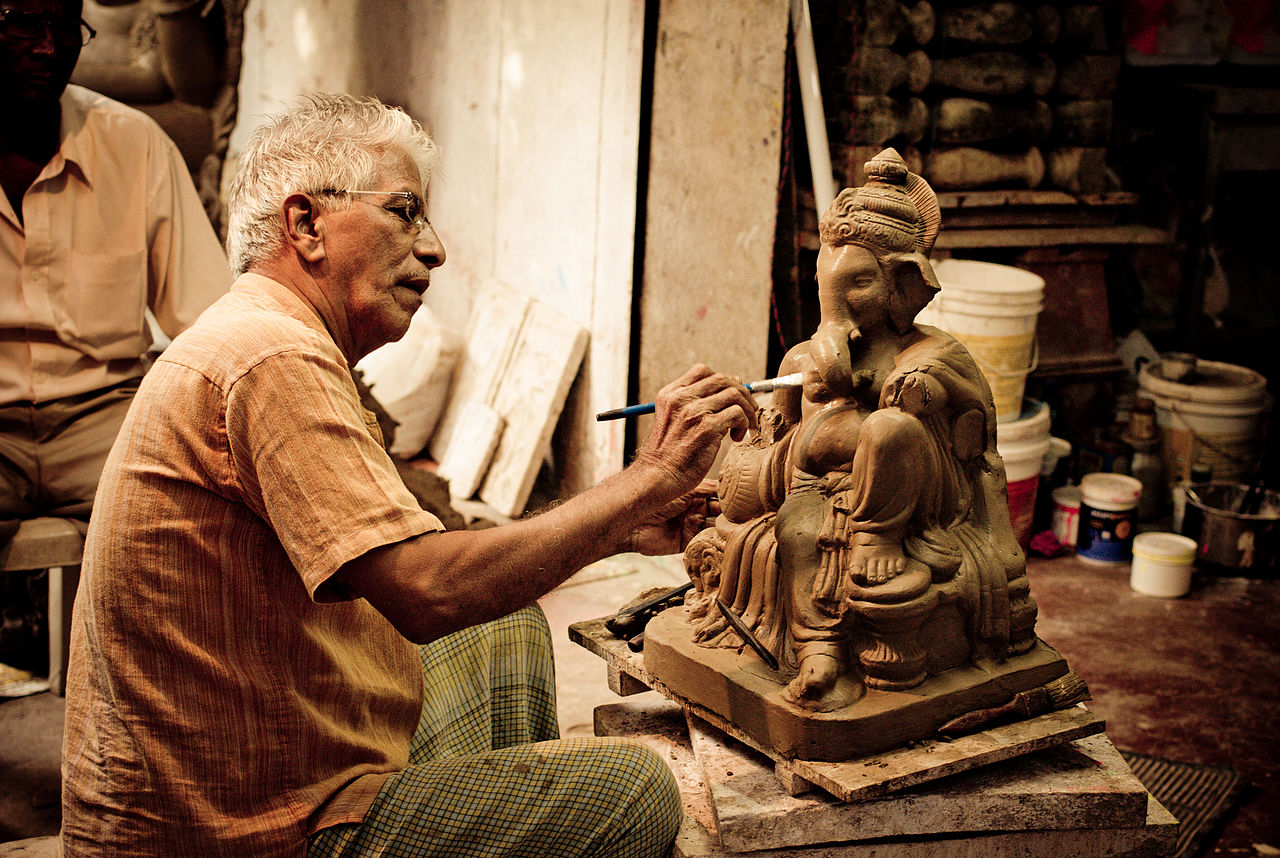 With every place, both home and public spaces, becoming dotted with small and mighty idols of Ganapati, extravagant decorations ensue. The idols are usually ordered a month or so before from the local artisans. Other puja accessories and decoratives, including LED lights, wall hangings, etc, are bought and kept ready days ahead of Ganesh Chaturthi.

Flowers are a must. Offering red flowers (red hibiscus) is often considered auspicious and if not available, other flowers with Tulsi leaves can be used. An indispensable inclusion in the rituals is durva grass, a herb that legend says had relieved Ganesha when he swallowed a demon to protect the world. Colourful rangolis and beautiful bandhanwars also spruce up the aura of the celebration. 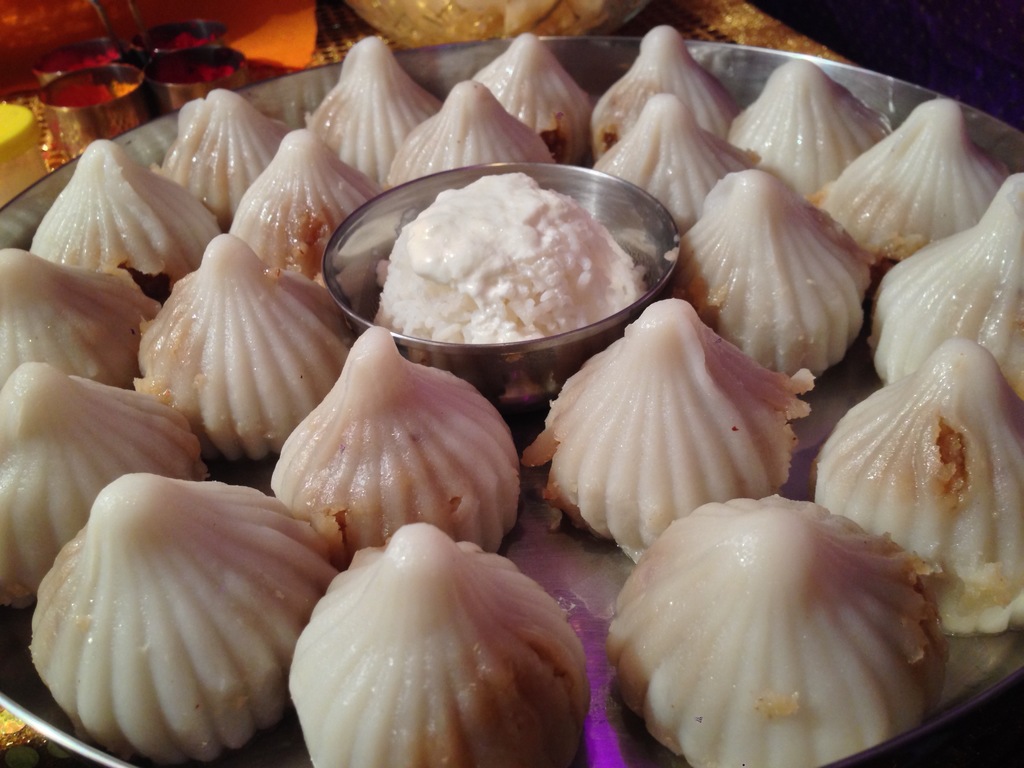 Food is an integral part of any Indian festival, and especially so for Ganesh Chaturthi because modak is said to be his favourite sweet. It is a delicious sweet dumpling made of rice flour stuffed with grated coconut and gur (jaggery). And for the love of his sweet delight, Lord Ganesh is also sometimes called by the name Modakpriya.

It, therefore, has become customary to include a variety of sweets in the prasad or prasadam (food offered to the deity) during Ganesh Chaturthi. Laddu (besan and motichoor laddu are a no-brainer), karanji, vrundallu, nevri, chalividi, etc. are some of the sweet offerings made to the lord in an array of delightful flavours by different groups of people.

It is said that if you want to have a truly cultural immersive experience, the best time to visit any place is during a festival. While Lord Ganesha is a much-loved deity of the Hindu pantheon, and in his honour, almost the whole country gets decked up, there are a few special mentions that take this fiesta to a completely different level.

Below are some of the notable places where you can visit to witness the Ganesh Chaturthi festival in its grandest form and how they may be celebrated differently this year. 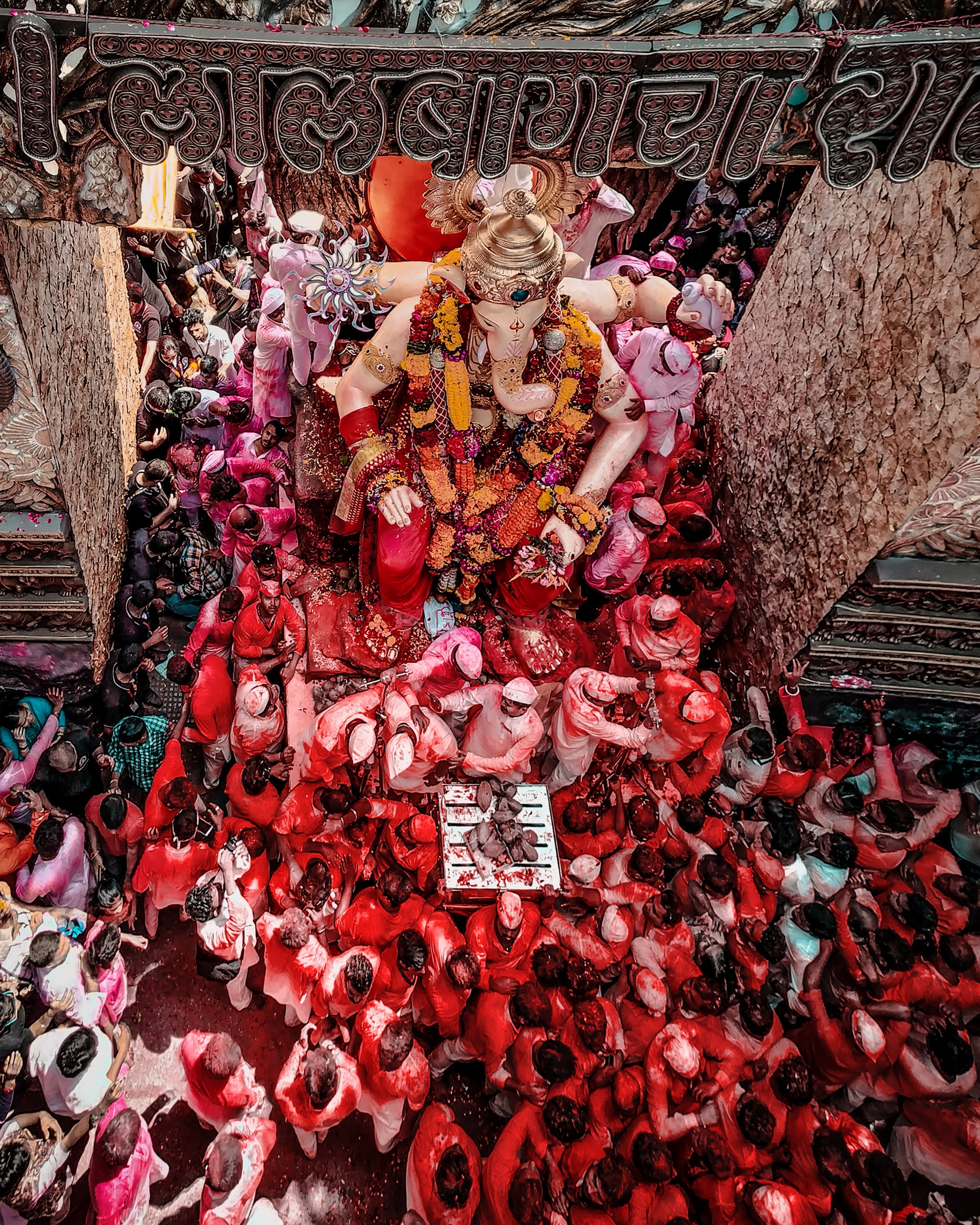 The commercial capital of India knows its way to celebrate festivals in India and leaves any resident or non-resident in awe. No other place in the country match up to the city of dream’s Ganesh Chaturthi celebration. In 2019, over 38,000 idols were immersed on Visharjan day across 129 locations in Mumbai. Yes, it is that magnificent!

The celebration takes place either in homes or is organized by different societies, the sarvajanik (public) puja pandals. A healthy competition goes on between different organizations that try to take home the prize for the best pandal and idol. A few places in the city that boast of a great pandal are:

For the year 2022, the Maharashtra government has decided not to impose any restrictions on the Ganesh Chaturthi celebrations starting 31 August 2022. The authorities have also removed the height restrictions on idols and allowed processions, which were in place for the past two years. 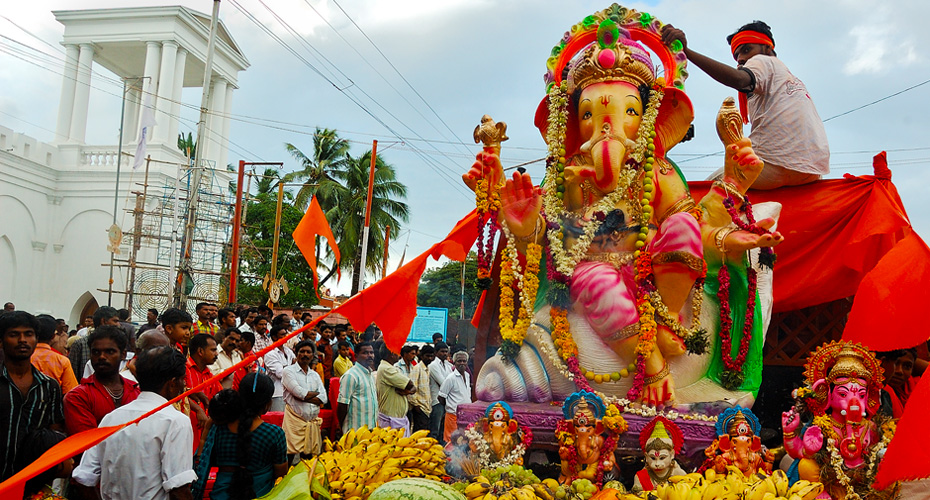 While no one really knows for sure when the celebrations for Ganesh Chaturthi began, they did take a grand form in the 17th century here in Pune during the founder of the Maratha empire Shivaji’s rule. During this time, Peshwas considered Lord Ganesha as their patron deity.

As the cultural capital of the state of Maharashtra, the city has still retained its own traditional celebration of Vinayaka Chaturthi, with classical performances, drama, and traditional sports becoming the highlight of the festival. While every corner of the city gets all decked up during the 10 days, the best five cloud-pleasers are Kasba Ganpati, Tambdi Jogeshwari Ganpati, and Tulsi Baug Ganpati, Guruji Talim, and Kesariwada Ganpati. Daghdushet Halwai Ganpati is yet another notable pandal that never fails to awe-inspire the visitors with its replication of famous monuments.

For the year 2022, the Maharashtra government has decided not to impose any restrictions on the Ganesh Chaturthi celebrations starting 31 August 2022. The authorities have also removed the height restrictions on idols and allowed processions, which were in place for the past two years.

Moreover, the Pune Police department has now issued the guidelines and restrictions for the 10-day Ganesh Chaturthi celebrations: 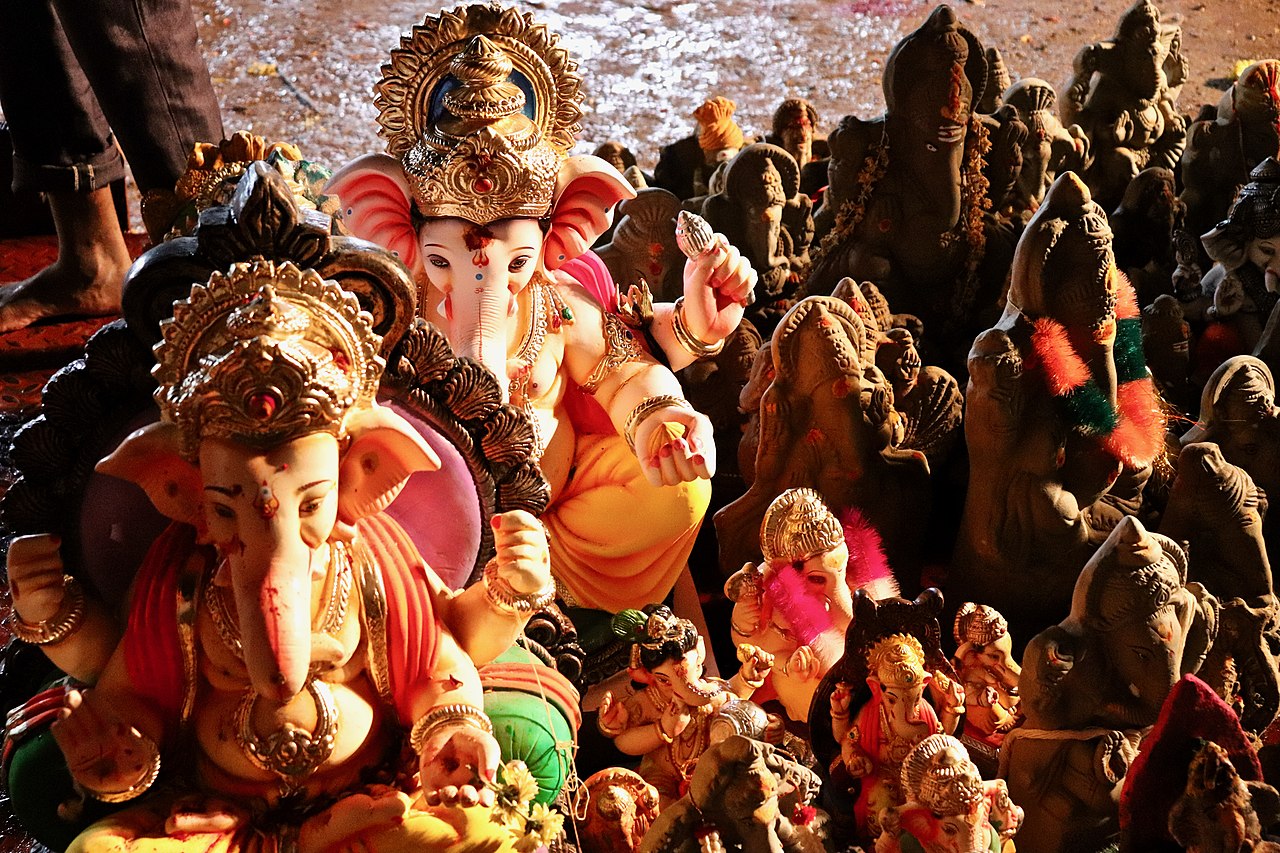 Fun fact: in 2014, to commemorate the completion of 60 years of Khairtabad Ganesh Utsav Mela, the organizing committee decided to build a 60 feet Ganesh idol holding a 5600 kg laddu in the left palm, making it one of the tallest Ganesh idols to be ever made in history. It was in fact, the tradition of the committee to increase the idol’s height by 1 meter every year for the previous six decades, having started with just a 1-foot tall idol. While the size was reduced post-2014, in 2019, it again went up to 61 feet.

Besides Khairtabad, Hyderabad as a whole witnessed nearly 75,000 pandals with a few lakh devotees making their way to offer prayers during the ten-day period. Balapur, Kamalanagar, Durgam Cheruvu, Kamalanagar Chaitanyapur, New Nagole, and Gowlipura in Old City are dotted with beautifully decorated pandals and Ganesh idols. Look out for the laddu auction at Balapur Ganesh. All of the immersions take place in the Hussain Sagar Lake and are a spectacle not to be missed!

Moreover, for the year 2022, as the Telangana government is likely to promote eco-friendly idols for the Ganesh Chaturthi festival, several departments in Hyderabad are all set to distribute over six lakh clay Ganesh idols in the city and will also be setting up an additional 50 artificial ponds for idol immersion. 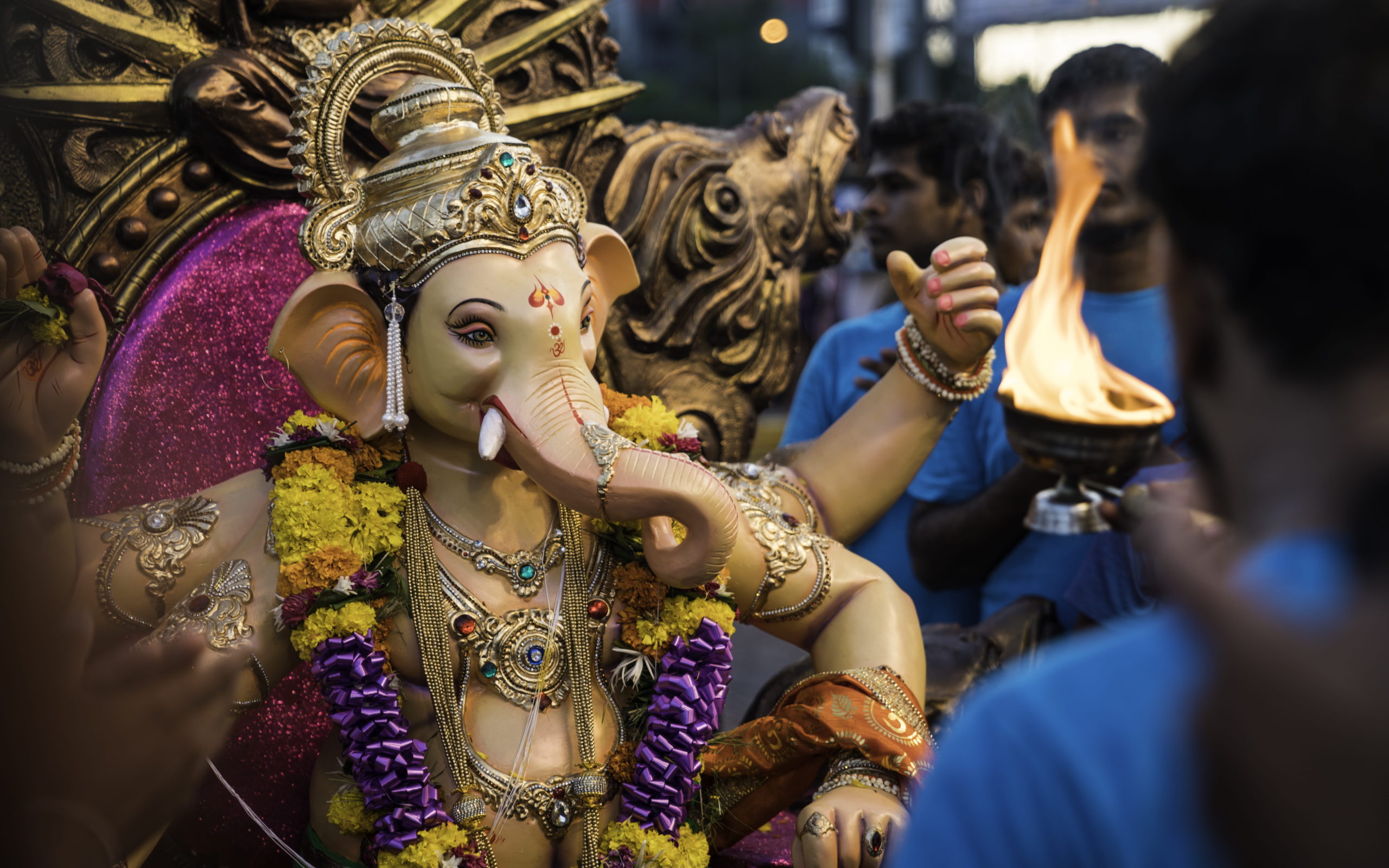 This year, the government has planned to soon announce the regulations that will be in place in Goa as the state just opened its doors to tourism. In Goa, the celebration of Ganesh Chaturthi dates back to the age of the Kadambas (rulers in the 10th to 14the CE). So while Goa is known for its pristine beaches, Portuguese colonies, and the susegad lifestyle, Goa sees a different picture when it comes to celebrating the birth anniversary of Lord Ganesha. In the local dialect Konkani, the festival goes by the name of Chavat.

It is the time of family get-togethers and unanimous celebrations. Pandals are set up, idols are adorned, and aartis are sung to please the Lord. On the third day of the month, women fast and worship Devi Parvati and Lord Shiva. The next day is the harvest day (Navyachi Pancham) when they bring in freshly cut paddy from the fields and commence the puja.

In Mapusa of North Goa, thousands of devotees flock to the Ganapati temples at Khandola and Ganeshpuri. Yet another village that springs to life are Marcela. It is the home to many Hindu shrines and the artisans in the village are extremely talented. You’d find Ganesh idols crafted of bamboo, cane, coconut, and arcenut. 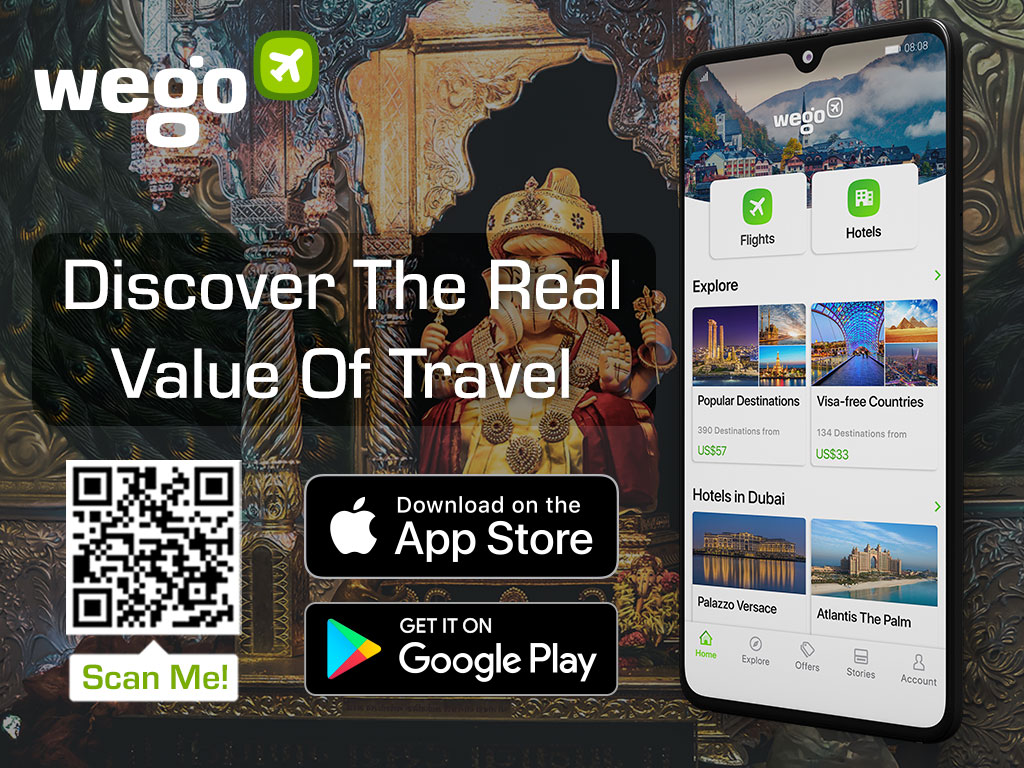