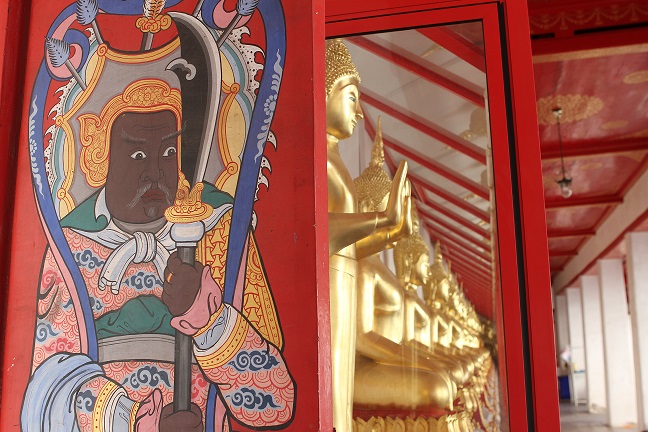 Noel Coward even mentioned the concept in his rollicking song Mad Dogs and Englishman, although he neglected to focus on the potential for perambulation through the back lanes of Siam’s old capital.

“In Bangkok
At 12 o’clock
They foam at the mouth and run,
But mad dogs and Englishmen
Go out in the midday sun.”

But no, says Ken Barrett, author of the book 22 Walks in Bangkok.

“The key is to go out really early, with the monks and their begging bowls at dawn, walk and explore and pack it all in by 11am by falling into a cool air-conditioned taxi,” recommends the intrepid journalist, author and photographer who has called Bangkok home for decades.

“Any later than that, even in the mythological thing Thais call ’the cool season’, renders you stupefied and dehydrated,” opines Barrett.

Like most great cities, Bangkok is best seen from street level and the only way of really examining the soul of the heaving metropolis is on foot. After living here on and off for two decades myself I have found many of the delights of walking in Bangkok, always mindful of the need for a cold tincture during and after the process.

Ken’s fascination with the real history of the Thai capital, whose real name has 163 characters ”“ “krungthepmahanakornamornratanakosinmahintarayutthayamahadilokphop-
nopparatrajathaniburiromudomrajaniwesmahasatharnamornphimarnavatar-nsathitsakkattiyavisanukamprasit” ”“ began, like me, in his early days of living in the city.

“Being British my habit has always been to walk around a new place, get my bearings and savour the street level sensory riots, particularly in cities in Southeast Asia which have such richly textured histories,” says Ken.

Another attraction of walking in Bangkok is that the place is entirely flat and at sea level, so apart from pedestrian overpasses and steps up to the Skytrain, it is a walker’s delight.

Part travel guide, part history book, part personal anecdote, 22 Walks in Bangkok takes you on a magical journey to places often simply staring the average tourist in the face, but somewhat opaque because of language and the lack of signage or information.

Walking in Bangkok is also the only time the fashion police will allow one to wear socks with sandals, Birkenstocks being the footwear of choice for stout Europeans. While Thailand was never officially colonised, a badge of honour for Thais, Bangkok and its environs have been home to Portuguese, French, Belgian, British, Japanese, Chinese, Burmese, Indian and other settlers over the past couple of centuries.

Yes, the wrecking ball has laid waste to much of the city’s architectural and cultural heritage, but patience is rewarded when you find yourself in the middle of a time warp, surrounded by shop houses, a Catholic church on a riverbank, a churning street market or even in the lush grounds of a five-star hotel.

My favourite walk in Bangkok, which Ken records in his book, is actually in the heart of one of the business districts of the city, Sukhumvit. It has the richest of history and the absolutely unique reward is a forest of phalluses at the end of your toils. This is the shrine of Chao Mae Tuptim, the female goddess of fertility. Its huge fichus tree centrepiece is surrounded by what wags have come to call “priapic park”, a collection of phallic forms numbering hundreds if not thousands, of all shapes and sizes.

Fertility symbols at the Tuptim shrine

I first discovered this shrine late one night after dining at the then Hilton hotel’s Ma Maison restaurant with a visiting client from London. After a long and bibulous dinner our companion, a delightful Turk who grew up in Bangkok, invited us to follow him out into the lush gardens behind the hotel. I knew what was coming as I had been warned.

We made our guest, a game but fairly prissy Brit, cover her eyes, led her to the shrine and asked her to put out her hand which I rested on the biggest phallus I could find and instructed her to “make a rubbing motion”. Then, in the dim light we invited her to view what she was caressing. Her shrieks drew the security, who simply laughed when they realised we had played the resident trick.

The Chao Praya River is the lifeblood of Bangkok and many of the best walks start at one of the dozens of ferry landings. Far from the quays for the Grand Palace and reclining Buddha are the walks of Chinatown and other glorious old sections of the city.

A traditional Teochew house on the bank of Klong Bangkok Yai

Barrett has been meticulous with his research and has spent years delving into the history and provenance of his subjects. The book grew out of a very successful series of articles in a now-defunct local magazine and with much cajoling the author went back and fleshed out the information, taking a series of excellent photographs. With exotic chapter headings such as Money Town and The Old Harbour, the reader is drawn into an almost crepuscular underworld that lies a milimetre below the surface of modern Bangkok. The phonetic spellings of old Thai names, mixed with Chinese and a polyglot of other languages makes the text a meal in itself.

Even visiting the Grand Palace, under the careful guidance of Barrett’s prose, becomes something memorable, not just a tourist experience surrounded by Koreans information.

Instead of just gawking at the golden rooftops and glittering chofah, the visitor is treated to a side dish that explains how the palace came to be and also where to visit in the maze of streets that surround it.

You don’t have to be a mad dog, or an Englishman for that matter, to enjoy the footfalls of Bangkok, just remember to do it before you start foaming at the mouth in the midday sun!

22 Walks in Bangkok is available on Amazon.