How to Discover Another Side of Manchester

There’s more to Manchester than just meets the eye. Go to the Visit Britain website and learn how to discover another side of Manchester.

Manchester never stops moving. Over the last 300 years, it has grown from sleepy town to industrial powerhouse – and while its factories lay dormant for decades, they’ve now been reinvented as hip new restaurants, markets and hotels. This innovative spirit has sparked smaller treasures too, street art trails and foodie tours to discover, while a fresh crop of parks and gardens breathe new life into the city. One thing is certain: when you seek out these hidden gems, you will find lots more along the way.

Quirky things to do in Manchester

A city’s food reveals so much about its character – and Manchester’s plate is piled high. From freakshakes at Black Milk and vegan delights at Wholesome Junkies, to the globetrotting street eats at GRUB MCR and Hatch, it’s chock-full of great bites. To delve deeper, Scranchester’s food tours reveal how the city’s cultural roots have inspired its eclectic cuisine, with eight tasting stop-offs along the way – none of which are revealed until the tour itself.

Ancoats is just one of Manchester’s many success stories: a neighbourhood transformed from an industrial suburb into a haven of nightlife, shopping and indie bistros. As has its neighbour, the Northern Quarter, where vinyl record shops sit between vegan cafés, art galleries and music venues. Street art walking tours delve into the district’s evocative murals too, with many of its buildings used as giant canvasses for artistic expression. Another regeneration project, the new RHS Garden Bridgewater features a leafy wild woodland and ornate ‘Paradise Garden’ to the north-west of the city, plus everything from light trails to outdoor concerts year-round. 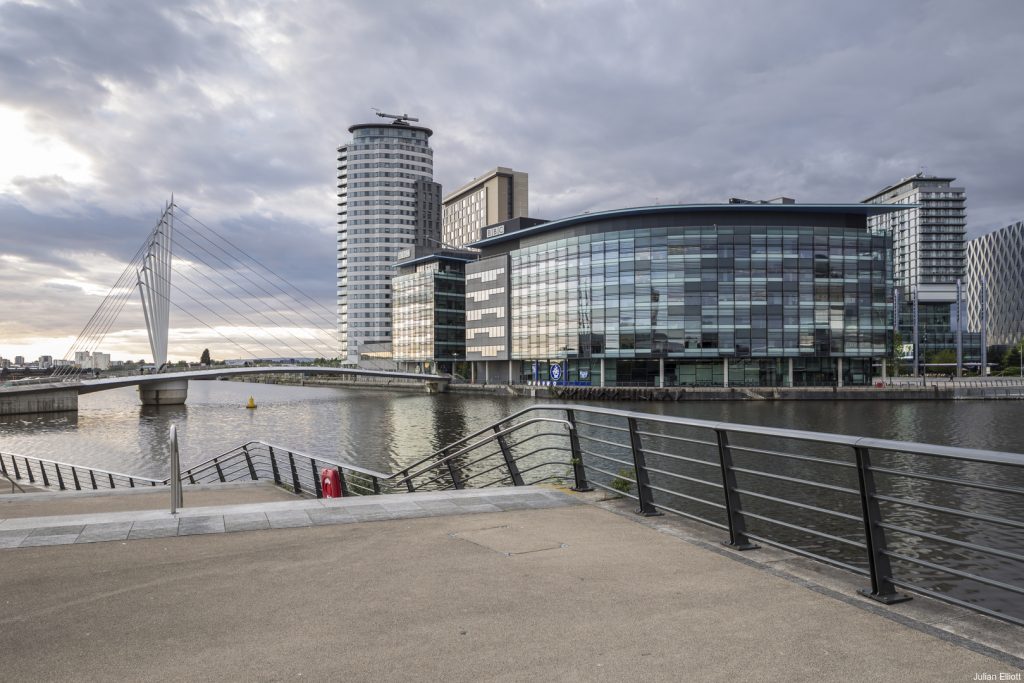 MediaCityUK on the banks of the Manchester Ship Canal in Salford and Trafford, Greater Manchester.

The city’s waterways are full of surprises too. Manchester River Cruises provide numerous tours, but at the Quays, the Salford Watersports Centre offers a chance to get hands-on. Pick from wakeboarding, paddleboarding and moonlight kayaking tours – complete with head-torches and glow sticks – for a different perspective of Manchester. This lively area is also the home of MediaCityUK, where the BBC – which celebrates its centenary this year – has its flagship studios. Just across the water, daredevils can brave the rope bridges, climbing walls and ziplines of the new I’m A Celebrity Jungle Challenge.

For music fans, a free walking tour unveils the infamous clubs and hangouts that shaped Manchester’s top bands: from The Stone Roses and Oasis to The Smiths. At Manchester Museum, the ‘Thursday Lates’ offer after-dark talks and film screenings.

The Lowry Hotel is a five-star retreat, with sumptuous bedrooms, top-notch service and delectable fine dining. But it’s also a real force for good, supporting local charities and community projects, and using 100 percent sustainable power. A similar ethos exists at Yotel Manchester, thanks to its solar panels, smart LED lighting and refillable toiletries. For every day that you turn down housekeeping (saving water and energy), you’ll even receive a £5 voucher to use on food and drink. Expect playful design and bright, budget-friendly rooms, as well as a central location in the heart of Deansgate, close to the John Rylands library.

Where to dine differently in Manchester Manchester’s dining scene has been key to the city’s regeneration, transforming many of its old waterside warehouses into thriving social hubs – with tasty street food and live music. At Escape to Freight Island (a former freight depot), take your pick from numerous international eateries, covering everything from Vietnamese pho to Mexican tacos.

Close to Piccadilly Gardens, Ducie Street Warehouse is a restaurant and events space in one – with an ever-changing line-up of supper clubs, craft workshops, DJ nights and stand-up comedy acts.

Meanwhile, Mackie Mayor occupies the former Smithfield Market, a bright and airy heritage building with masses of character. Its communal dining hall is always buzzing, and the eclectic food stalls serve everything from sourdough pizzas to roast beef dinners, custard-stuffed doughnuts and much more.

Getting there and around

There are three free bus routes in Manchester, with services every 10-20 minutes, as well as an extensive network of trains and trams. All are wheelchair accessible. Manchester’s cycle scheme is growing too: by summer 2022, there will be 1,500 bikes and e-bikes available to hire.