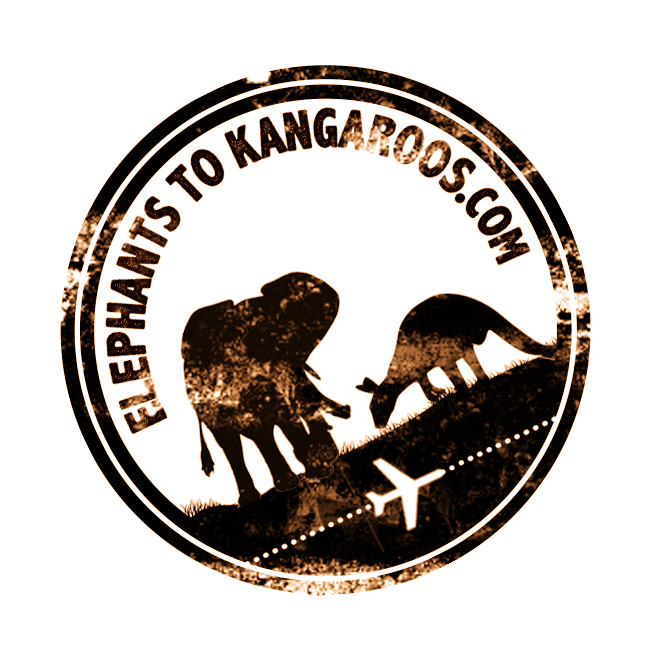 A journey from elephants to kangaroos

Feeling uninspired in her job and gripped by the promise of adventure, Charline set out from her home town of Paris, France, on a journey which began in Africa (elephants), crossing India and Southeast Asia, all leading to her final destination, Australia (kangaroos). Charline is sharing her travels at elephantstokangaroos.com, in both French and English featuring some very inspirational photography as she captures the spirit of the people and places she encounters along the way.

Wego’s Travel Editor caught up with her in Bali, in town to celebrate the island’s 24 hours of silence known as Nyepi.

Why elephants and why kangaroos?

I started my trip in Kenya and will end the final leg in Australia/New-Zealand. I thought using the images of these iconic animals would be a fun and easy to understand way of sharing it with people. My world tour covers Africa and Oceania, via India and Asia, and elephants can be found there too.

How long have you planned this trip and when did you first decide to undertake this trip?

It took me more than a year to plan the trip before I actually stepped foot on my first plane. I think I’ve always wanted to do this world tour but it became more a reality after I realised in May 2012 how unhappy I was with my job. I decided I would quit and spend a year travelling the world to find a new job where I would be happy. My plans then began in earnest in December 2012 with a planned departure of September 2013, after I considered for several months whether I would travel to just one country, or from the top of the world to the bottom.

A tiny arrival in Kenya

Can you share a little about the volunteering you did in Kenya and what experience had the greatest impact on you?

The volunteering in Kenya with the Migosi Family Hope Society was amazing! It’s a small organisation based in Kisumu, that I found through a larger representation in Nairobi. I stayed with the family who created it. We had several missions such as building a school for poor children, meeting lonely women and providing them with some food, going to the juvenile house every week to spend some time with the kids, cleaning up in the city as an environmental project and so much more. Basically, anything and everything we could do for the community. 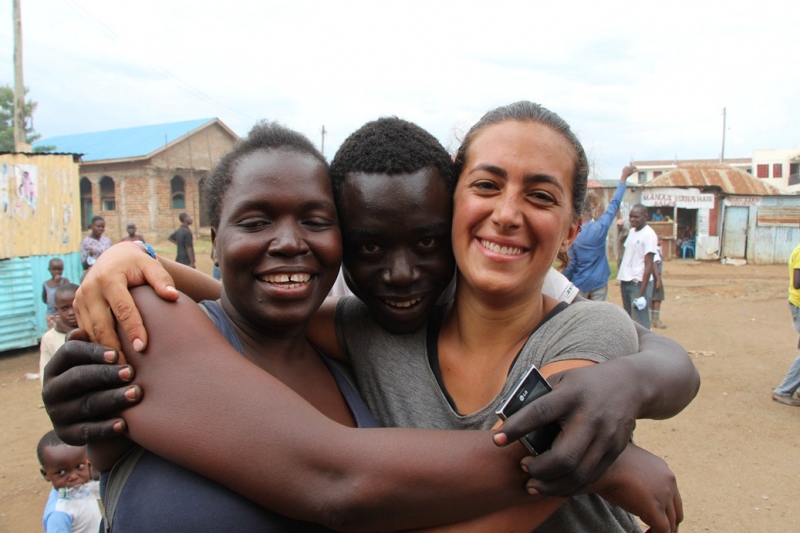 This experience helped me to realise what life is really like in Africa. I was really shocked at first and it was hard to see all these incredible people who have nothing, living their life happily while people in Europe and richer countries (including me) always complain about everything. But after three months living with my host family, I came out really changed, focusing on the important things. People there have a real sense of community, always helping each other. I was amazed by the kids who play with everything and nothing but are always smiling. No one complains, even when they can’t buy food or don’t have water. It is a real lesson in life!

How many countries have you been to so far, how many more planned?

So far, I have been to eight countries (Kenya, Tanzania, India, Myanmar, Vietnam, Philippines, Indonesia, Cambodia) and I still have five or six more to go (Laos, Thailand, Singapore, Australia, New Zealand and stop by USA and/or probably Canada), depending on whether I change my mind again!

You must have seen and experienced some fascinating local encounters – which stand out the most?

Just the simplest encounters with locals on the streets who want to talk with foreigners, not to say so much, but just because they want to share a part of their life. Beyond the incredible encounters in Africa that I already mentioned, I really loved those chats in Myanmar with these lovely people who barely speak English but like it so much. I remember one evening after a trek, we ended up at one host family’s home. They didn’t speak English or even Burmese, only their local dialect. But thanks to our guide who translated everything, the group and I had one of the best evenings so far chatting with them, learning how they live, talking about their life (they were around 70 years old). It was a simple but incredible moment.

How difficult is it as a female travelling alone – have you at any time been concerned for your safety?

I don’t feel any particular difficulty so far travelling alone. I had some concern before I left because of everything you hear or read. People always think that being a woman can cause you problems on the way, for example in India. But for me it’s actually just the same, sometimes even an advantage, because some travellers or locals take special care of you when they see that you are alone.

The only uncomfortable experience I had so far was once on a bus in India where a man wouldn’t stop looking at me and it really bothered me, so I asked someone if it was OK to exchange his seat with me, and he accepted of course.

Can you tell us about some of the fellow travellers you’ve met along the way?

It is incredible the travellers you meet on the way! Most of them are people you would probably have never talked to in a ‘normal’ situation. I spend loads of time with solo travellers like me but also couples, groups of friends and so on. I can’t tell you one nationality in particular because I’ve been meeting people from all around the world but I really love people from Poland and Sweden. I don’t know why but I always have a good feeling with them and we have great times together. And also a lot of English, American, German people and so on. These people range in age from 19 to 65! That is the beauty of this trip. There are no judgements of anyone and you can connect with people who are your complete opposite. Most of them travel for two to six months. I met very few like me doing a world tour but there are some!

In addition, you create a special relationship with these people, so I continue to stay in contact with a lot of them now and we share our experiences, good tips and I even plan on seeing some again on the way, or later.

At the Taj Mahal, India

I imagine a trip this long would require a great deal of clever budgetting – what have been the best hotel bargains you’ve had so far and where?

You have to bargain for EVERYTHING! Every cent that you save on the way is useful for something else so you have to get used to it! For my part, I bargain at almost all the hotels, especially if I’m staying more than two nights (which doesn’t happen very often). I don’t really remember paying the ‘regular’ price anywhere except the cheap dorms where it’s a fixed price for everyone.

I think my best deal up until now is probably the one from which I am writing to you from right now in Cambodia which was $21 per night for a single room $25 for a double. But I bargained and I now have a double room (no single available) for $15 per night which is a pretty good deal considering that I’m staying six nights. That is also one of the most expensive hotels I’ve stayed in so far. Normally I pay around $3 to $8 per night depending on the country/city/type of room or dorm.

What part of which culture that you’ve come across so far has impacted you the most?

Hard to say”¦ You have so many things to learn from in every country and every culture, it’s hard to pick one especially.

I guess in general, all the countries I have been to are poor countries and you just learn in all of them how to be happy with nothing, or how to help each other. I see things differently now. I spend time with people on the streets just talking to them if they talk to me, or if I feel like they may like to. I always have some cookies in my bag to give to some kids. I guess I accepted the poverty everywhere I visit but I try to make a small impact for the better wherever I go, even if I can’t change the all world by myself.

Sharing the fun in Dalat, Vietnam

Has there been a favourite city/country as yet?

As I always say when someone asks me that, just as I love my Mum and Dad equally, you can’t ask me to choose one particular country or city either, because everything has just been wonderful so far. But I admit that I now have a special attachment to Kenya because of the moments I spent there. I also have amazing memories of my safari in Tanzania. I really fell in love with the people and landscapes of Myanmar. I was surprised by the beautiful and various places I saw in Bali. And I am not really a city girl but I really loved Ho Chi Minh – such a huge city!

Where are you going next, and plans for the rest of your trip?

I left Cambodia in April and am now in Laos where one of my best friends is joining me to celebrate my birthday. Then on to Thailand, Singapore and then leave Southeast Asia to discover Oceania! But we never know what tomorrow brings, so I don’t make too many plans.

How difficult will it be for you when the trip is over – will you be able to stop in one place ever again?

I think after travelling for almost a year and a half, I will be happy to settle for a while, spend time with my family and friends, reconnect with ‘normal’ life (if this is a normal life”¦). So I don’t think it is going to be that hard at first plus I will need to make some money too!. But I don’t know yet. This envy of discovering the world will never leave me so I guess I will want to stop in one place to live but I will have to find a compromise with a job that allows me to travel a lot.

My ideal job would be travel photographer so we never know, maybe one day this dream will come true. And like I always say, “live your dreams, don’t dream your life” so”¦let’s see.

Photographs courtesy of Charline at elephantstokangaroos.com