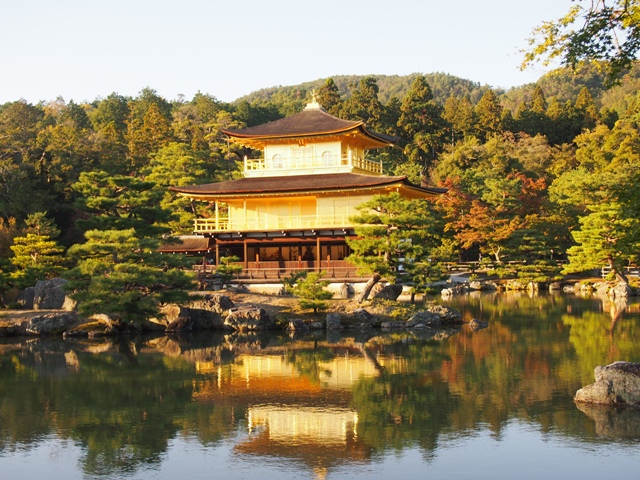 Kyoto, the Jewel of Japan

She walks purposefully, if a bit daintily outside one of Kyoto’s countless temples.  Dressed in a long pink satin kimono, her black hair is swept up and fixed with a fake scarlet hibiscus flower. Traditional wooden soled shoes make a susurrus on the pavement. As a fashion statement, she makes a splendid impression. 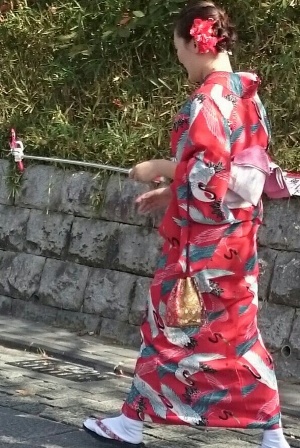 Extending from her right hand is a selfie stick, smartphone set on video mode. She narrates loudly while walking. Her attention is entirely self-focused.

Is this the contemporary face of tourism in Kyoto?

Keeping up with its historical past, traditional outfits are for hire in countless shops throughout Kyoto, which is why you see contradictory sights like a modern woman attired in a mock vintage kimono doing the tourist walk with a selfie stick in hand. 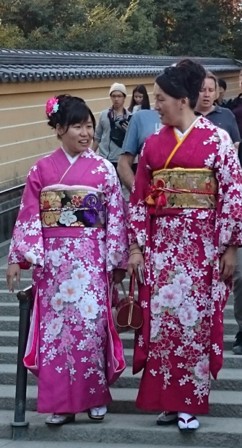 By the way, many international visitors are unaware of this custom popular with Japanese, Korean and Taiwanese tourists in Kyoto. The elaborately costumed women you see everywhere in Kyoto aren’t one of the Gion district’s few remaining working geisha, despite frocking up in a traditional looking outfit.

In old Kyoto, the Gion shrine gave name to the well preserved historic Gion district. The name of the temple was changed to Yasaka some two centuries ago when the neighbourhood attained status as a place where sex and fun could be bought in lieu of piety and reflection. Gion is where geisha continue their honoured profession working from a few private clubs.

Check the sign boards near the entrance to see which geisha are available for hire if you’re in the mood for some old fashioned Japanese entertainment.

Kyoto is to the Japanese what Washington DC is to Americans, what Beijing is to the Chinese. A patriotic pilgrim’s right of passage, every good Japanese citizen isn’t doing their national duty without making at least one visit.

Actually it’s not a town. With more than one million residents spread across a large area, it’s no more a town than Manhattan is.

But it is assuredly the single most important cultural city in all Japan, capital for over one thousand years, from 794 until 1889 when the Emperor Meiji and his court moved permanently to Tokyo (’Eastern Capital’) whose name he had changed from Edo.

It’s important to remember that Kyoto’s status as a national treasure would not be what it is today were it not for a capricious twist of fate. Targeted as the second drop spot for the atomic bomb, nicknamed ’Fat Boy’, it was the more powerful one that destroyed Nagasaki after the first less powerful bomb (’Little Boy’) flattened Hiroshima.

Kyoto’s annihilation was seen by many Americans in charge of the nuclear bomb program as the more favourable target due to its cultural heritage, significant universities and strategic position as a manufacturing hub.

Though the well known American art historian and archaeologist Langdon Warner is attributed as pleading convincingly for the recognition of the ancient city’s treasures and therefore rescuing Kyoto from impending doom, the real saviour was America’s Secretary of War, Henry Stimson. It was Stimson who argued successfully for its ultimate survival. Secretary Stimson convinced President Truman that bombing Kyoto, therefore forcing the Emperor’s capitulation, would irrevocably turn Japanese public opinion towards the Russians instead of the Americans during Japan’s subsequent occupation and inevitable restoration.

In the 1920s Stimson served as the US Governor of the Philippines and supposedly honeymooned in Kyoto. He was passionate about Kyoto’s unique collection of over 1,600 shrines and temples and their importance to Japanese sense of identity and its lengthy history. Most of all, he recognised Kyoto’s unique position amongst the remaining wonders of the world.

Over the centuries, most of Kyoto’s innumerable shrines and temples have burnt to cinders and been rebuilt or been shattered by earthquakes and reconstructed but an atomic bomb would have utterly destroyed everything and everyone.

Would all of Kyoto’s wonders have been rebuilt in perfect replication from the ashes of the most destructive bomb ever detonated to end a war?

Luckily for us, we’ll never know.

Reflect on this knife-edge twist of fate when visiting Kyoto and give thanks.

Back to the present… you simply can’t take in all Kyoto’s sights in a few days. It would take months to explore thoroughly its array of 1,600 shrines and temples.

After a recent four day visit, my head was spinning; a bad case of temple-shrine vertigo. When they all begin to look too much alike, it’s time for a break, perhaps sipping a locally brewed Nihonshu (sake) in a cosy bar, flipping through a manga comic in a cute cafe or soaking in an onsen’s mineral bath.

Kyoto has plenty of cafes, restaurants, onsen and bookshops. It’s not all about shrine hopping. All the major temple complexes also include lovely gardens, perfect for quiet strolling and a bit of Zen reflection. 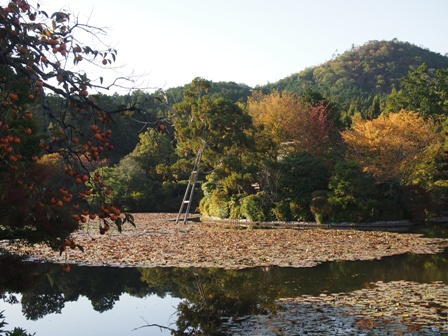 Neighbourhoods away from the major tourist attractions have the usual assortments of small bars, cafes shops where locals hang out buying the same stuff everyone else in Japan buys.

Despite a reputation as Japan’s most popular tourist destination, Kyoto is also a working city with the majority of residents not employed in the tourism industry.

I took in the major sights but managed to side-step the tourist crowds by avoiding peak visiting hours and including some off-piste attractions.

Because Kyoto’s major sights are literally on opposite sides of the metropolis with many in between, it’s helpful to divide your visits geographically. Try to pass at least one day exploring each: northwest (Kinkakuji Temple, Ryoanji Temple, Insho Domo Museum of Fine Arts are the justifiably most popular), east and southeast: (Kyomizudera Temple, Sanjusangendo Temple, Fushimi Inari Shrine and Sekhoji Temple are the highlights), central: (Nijo-jo Castle, the Heian Shrine and museums and the Imperial Palace, Sento Palace grounds and parklands feature at the top of everyone’s lists). 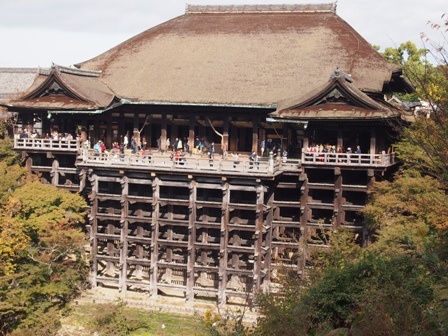 The Sannenzaka and Ninenzaka preserved districts down the hill from the Jishu Shrine and Kiyomizudera Temple are lovely for strolling both during the day and evening. Many of Kyoto’s best preserved private historic homes are found here. Several operate as ryokan where traditional Japanese services including kaiseki meals and tatami rooms are on offer at the high end of the yen scale.

At the far western end of the Kyoto metropolitan area is Arashiyama district, another cluster of shrines and temples nestled in forested foothills, arrestingly beautiful in autumn when the maple trees are glowing orange and red. Spring cherry blossom (sakura) time is equally lovely. The Tenryuji Temple is the heart of this area, easily accessible from Saga-Arashiyama and Trokko Saga stations.

Way across town from Arashiyama district on the eastern side is the Ginkakuji Temple area with its ’Path of Philosophy’ walk and adjoining Honen-in Temple. Nearby is the Kyoto University, Chionji Temple and Yoshida Shrine district, part of central Kyoto, less touristy than Gion or Sannenzaka but with a good assortment of cafes, restaurants and bars catering to students on a budget.

Bear in mind that Kyoto’s temples and shrines are not only historically significant but also religiously and culturally important to the Japanese. Many have been deemed ’national treasures’ that visitors are obliged to treat with respect. 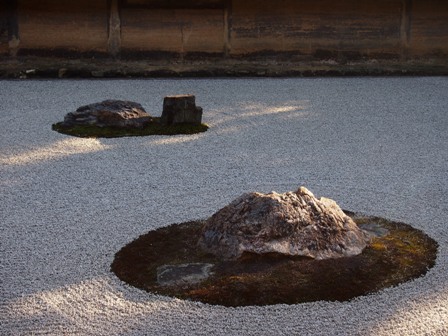 For instance the sublime Zen rock garden at Ryoanji Temple is a place of quiet reflection. Noise isn’t tolerated. At Kiyomizudera Temple is the Jishu Shrine. Known as the ’Cupid of Japan’ where rabbit images proliferate (rabbit images equate fertility in Japan as they do in Europe and elsewhere).  Facing the main building are two stones set approximately ten metres apart. Blindfolded love struck visitors walk between the stones. If they reach each one safely (no tripping over or straying off a straight path) from one stone to the other, dreams of love will be realised.

Try it. You may be surprised at how quickly your dance card fills.

The Fushimi Inari Temple is also a holy site. Fox images guard the entry gates. Signifying messengers of wisdom and cleverness, the fox also carries a key in its mouth representative of the lock to the rice granary, in other words the community’s repository of wealth and security. 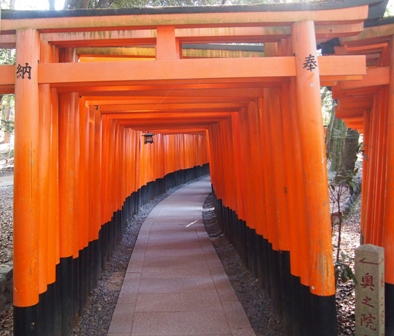 The main path up Inari Mountain (233 metres, roughly two hours climb up and back) above Fushimi is lined with over 10,000 Torii gates and is now the most popular sight in Kyoto. Inari is considered the patron of business, which is why so many Torii gates have been donated by scores of businesses to this particular temple.

Also near the main gate is a space specially reserved for a single car where temple priests are ’paid’ to bless the (usually prestige) purchase, hopefully ensuring a safe drive to and from work.

This summary of Kyoto’s highlights would maintain a keen traveller’s interest piqued for at least a week’s worth of persistent temple and shrine visits.

Central Kyoto is mostly flat, prime bicycling territory. Hire a bicycle and have fun pedalling along canals lined with maple and willow trees, away from traffic and other tourists.