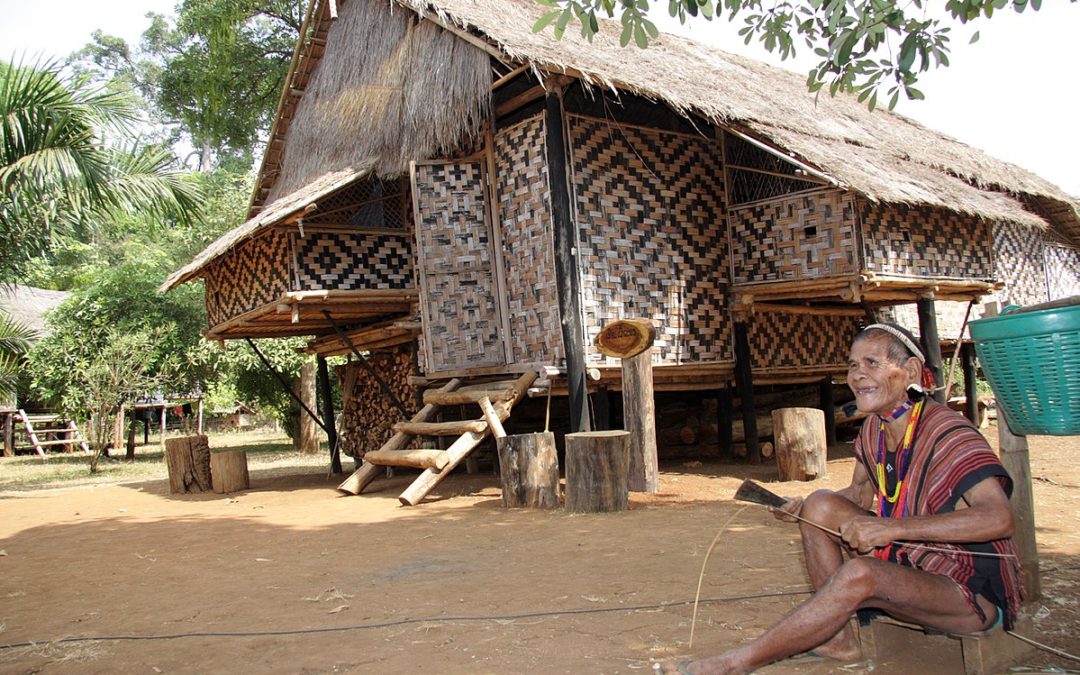 I Try to Be Openminded When I Travel, but This Small Village in Laos Absolutely Tested My Limits

I am a perpetual traveller. I have no fixed home and so am accustomed to playing the constant role of visitor in lands which are not mine. With that comes certain moral responsibilities and I try very, very hard not to impose my Western beliefs, ethics and standards on the experiences I have, the things I witness and behaviours which differ considerably to my own accepted ones.

I have learned that doing so is a form of arrogance, a type of deep disrespect. Besides, I have no right to judge peoples and cultures in countries where I am a guest. My views and morals, while perhaps having a place in a privileged Western world, are not always as black and white or appropriate in other lands. 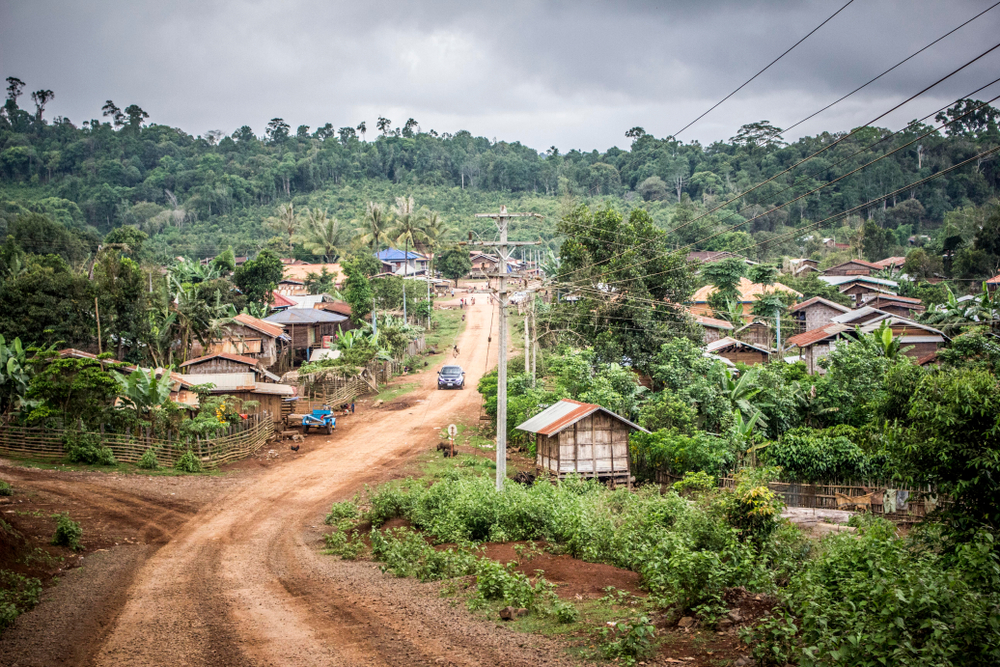 Sometimes, though, that ethos is pushed to extreme limits, and that’s certainly the case here. I was visiting a village of the Katu people, one of several ethnic minority tribes which make up the Laos population.

The Katu language and traditions are different and so too are their religious beliefs. Here they practice animism, a form of worship so old it pre-dates Buddhism, the principle religion of Laos.

I was a little uncomfortable overall in taking this tour, the only way to get access to this otherwise private place. I had questioned my motivation in wanting to go at all. Was I just going to gawp? How did the villagers feel about privileged tourists poking about in their day-to-day lives?

By doing what I was doing, was I being disrespectful, voyeuristic and stealing something of their dignity? Was I saying it’s OK to reduce human beings and their way of life to the status of live exhibits in a side show for entertainment?

I only agreed to go on the tour once I learned that the guide was a village member. This suggested willingness rather than exploitation, but still I was unsettled and confused.

The village was made up of large thatched huts constructed from bamboo, raised on stilts and arranged in a circle. Some of the biggest pigs I had ever seen were crashed out beneath the dwellings, avoiding the baking heat and finding relief in their dust hollows.

Otherwise my glance took in scraggly chickens, emaciated dogs and naked dirt-caked children – all wandering wherever fancy took them. 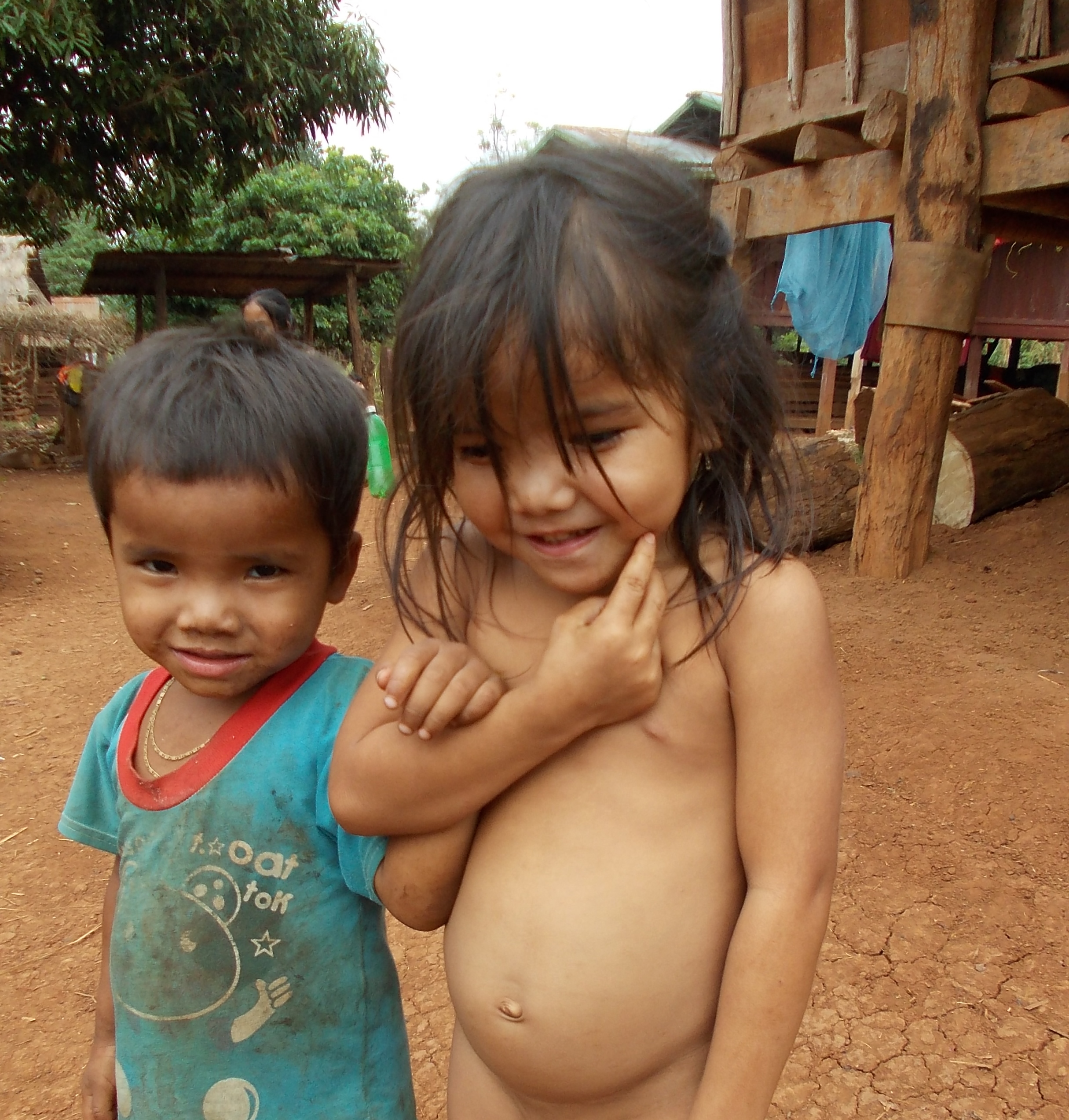 Work was going on everywhere. There were people preparing vegetables, cooking, washing, drawing water from the pump, carrying water to and fro, tending small plots of plants and vegetables.

All of it, I couldn’t help but noticed, was carried out by the women and children. ”Where are all the men?” asked one of our group. Resting in the huts, we were told.

Typically, each village man will take about six wives so perhaps this explains the need for frequent retreat and rest. The girls become of marriageable age once they reach 13. 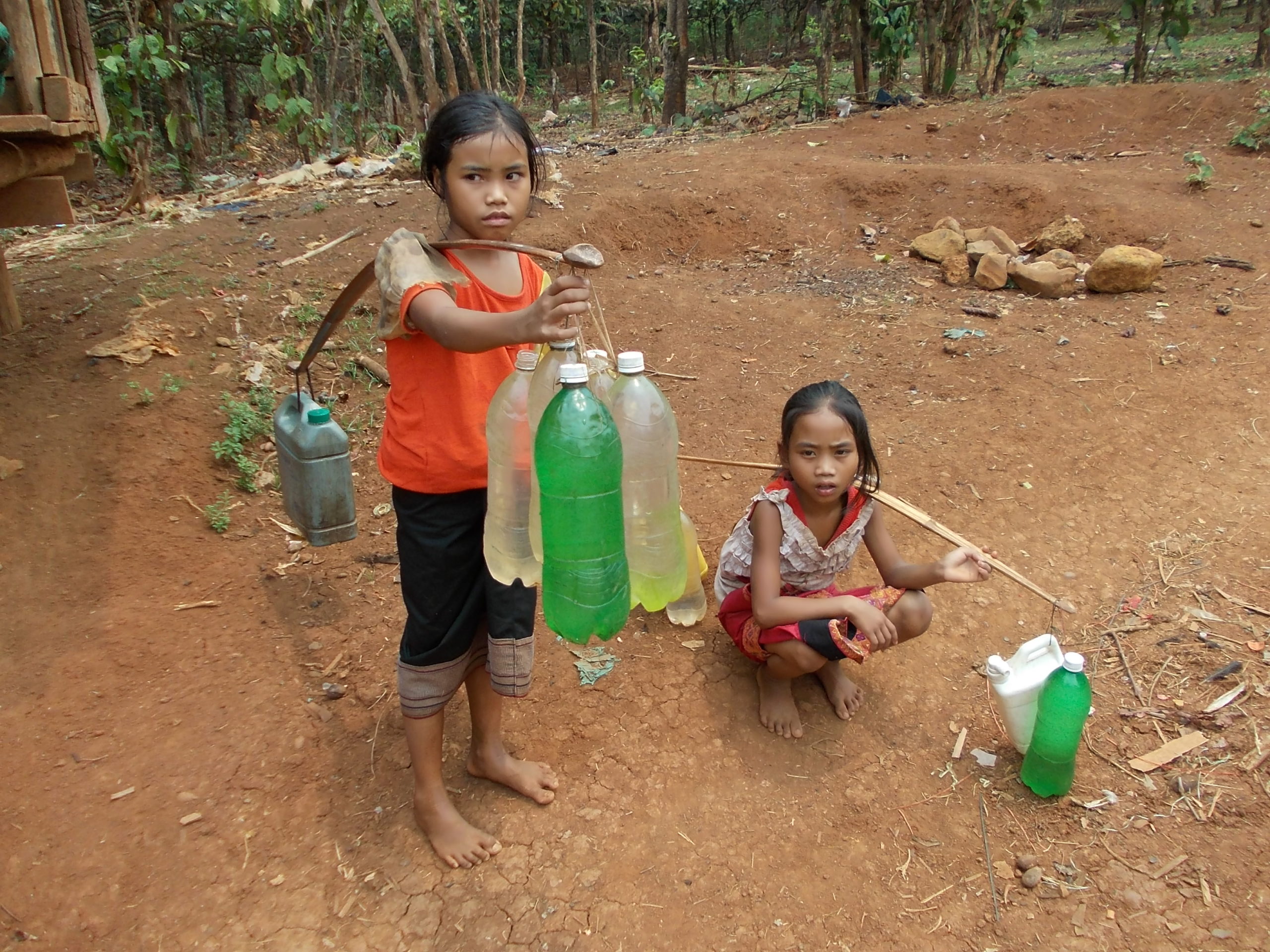 I passed a lady, working in the blistering sun, hefting a giant wooden pestle and rhythmically pounding the rice grains inside an oversize mortar.

She beckoned me and passed me the pestle to try my hand. It was solid, heavy wood – I could barely lift it. She smiled at me as I passed it back and I couldn’t stop this thought from crossing my mind: what on earth could she find to smile about at all? 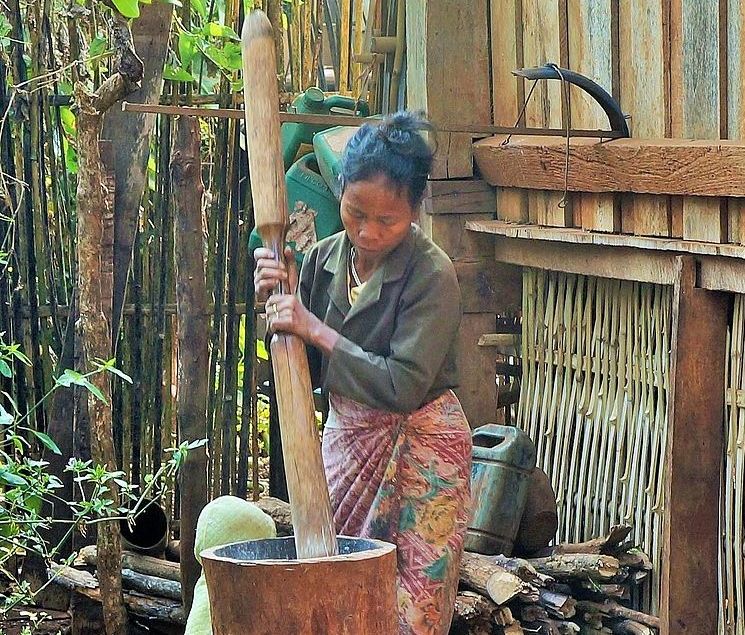 We were led to another part of the village where a rag-tag collection of children were engaged in smoking a huge shared pipe packed with the ‘special blend’ produced here in the village.

Though most of us in the group were seasoned travellers, we were all a little shocked by this sight—even more so when we’re told that children were introduced to smoking around 3 years of age. The children had a distinct glassy-eyed look as they slumped over stacked rice sacks.

When one or two of us try the pipe, it instantly became very clear that the ‘special’ in the blend was not tobacco. 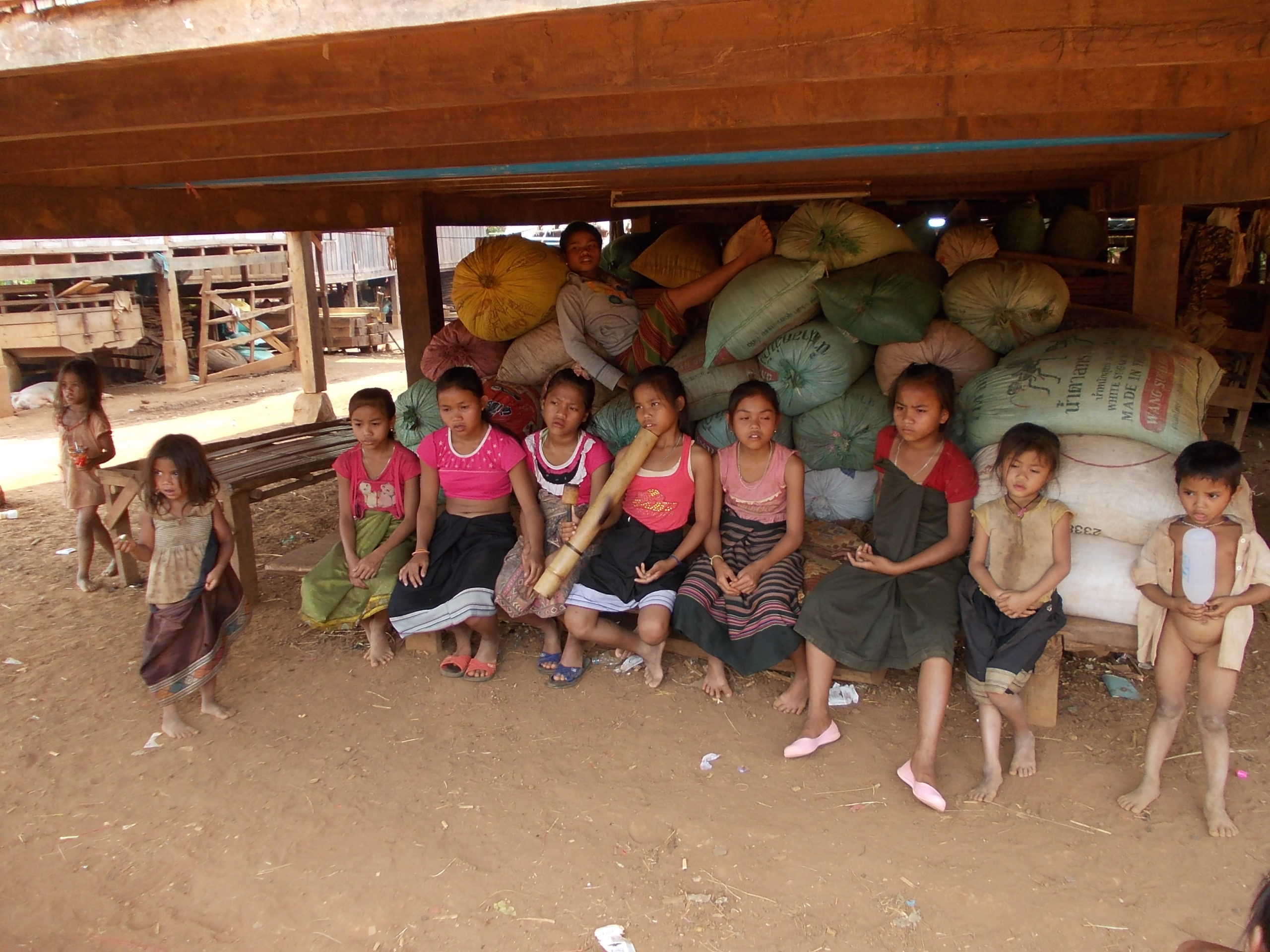 We heard something of the village shaman’s role and the animism rituals practiced to appease a collection of spirits, both the good and evil kind. Sacrificing dogs and water buffalo is part of this and the methods are, to my Western way of thinking, brutal and, again, shocking.

At the beginning of the tour, I took a series of photographs along with everyone else. But as we progressed, I found myself packing my camera away with a multitude of questions banging around my head. Why was I taking these pictures? So I could post them on Facebook later with frivolous captions which might just as well have said ‘would you look at this strange thing I saw today’?

As we drove away from the village in the mini-van, I was decidedly troubled and everyone else appeared to be deep in silent contemplation too. Later that day, alone again with my own thoughts, I began to sort through some of my feelings before realising it was impossible and, actually, that’s okay.

I am a Westerner, it is okay to have personal beliefs of what is right and wrong, to be muddled and confused about where those lines begin and end. It is also to be expected that some questions will never have answers.

Black and white may indeed be more clearly defined when viewed from the comfort of a British home. But under the light of different cultures, different environments, different circumstances, the colours, after all, become blurred shades of grey instead.

I learned something here today. I had of course learned some factual things about a small, strange (to me) corner of the world but of course that wasn’t the crux of it – I could have learned that by reading a guide book.

Most importantly, I had learned something about myself. Here, today, perhaps for the first time in perhaps my entire adult life, I truly and completely understood that I will always be learning and some of the things I have to learn will be challenging, some of it will be fascinating revelation and some of it will equate to extra baggage I now must carry from here.