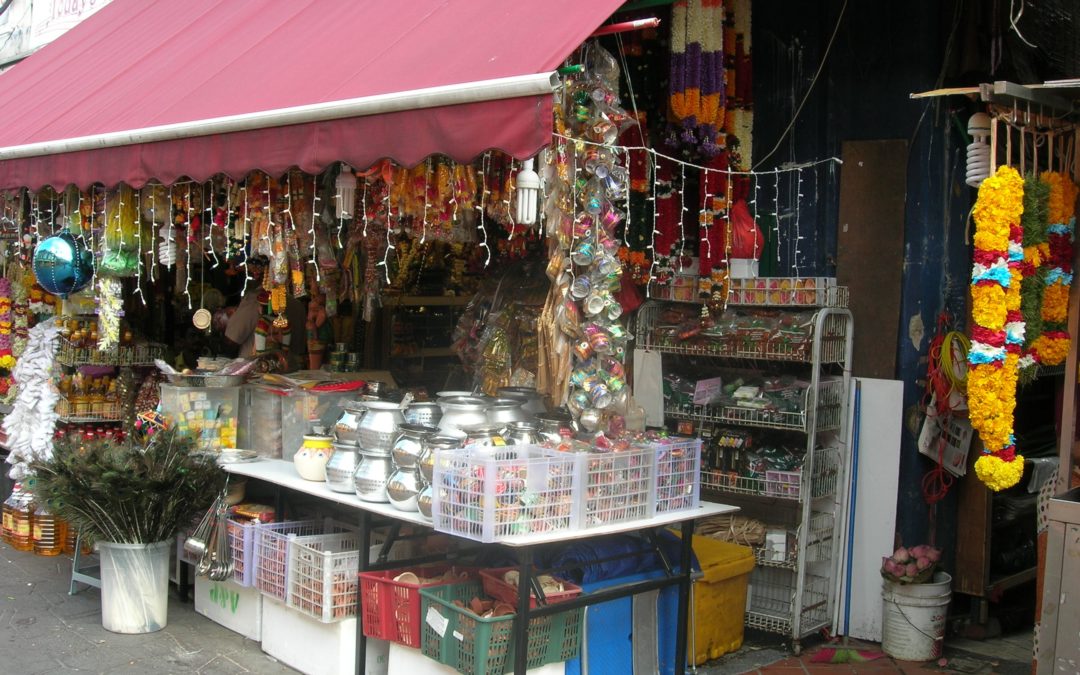 Little India is larger than life

Somehow it sounds just a little Somerset Maugham-ish when you bark “Serangoon Road, please” at the Singapore taxi driver.

The exotic sounding name is that of the main thoroughfare of Little India, the former Tamil settlement east of the Singapore River that has to be one of the most colourful and exotic parts of the shining metropolis that is modern Singapore.

During his few visits to Singapore in the early 1920s it is likely Maugham would have been fascinated by the chaos, cacophony and riot of brightness and exotica that is Little India.

The network of streets, still lined with brightly decorated old colonial shop houses, is home to thousands of not only Tamils but dozens of other inhabitants from all walks of life who call it home.

Old meets now: The backstreets of Little India are a riot of colour, period buildings and modern technology

When you grow bored with the glitzy monoliths of Marina Bay and the financial district or the brand bonanza of Orchard Road palls, a few minutes in a taxi or a quick trip on the underground MRT gets you to something completely different.

While more ordered than actual mainland Indian towns and cities, Little India gives you a bite-size taste of not just the foods but of the customs, the sounds and sights of the old country.

Maugham found great material for his collection of short stories entitled The Casuarina Tree from observing the people of Singapore and he was particularly fascinated by the Tamils, who he described thus: “”¦the dark-skinned Tamils walk on their silent, naked feet, as though they were but brief sojourners in a strange land”¦”

And nowhere are the silent, naked feet more in evidence than at the Sree Veeramakaliamman temple, the focal point of Serangoon Road and one of the key houses of worship in the City State.

After prayer, a call: Devotees take to their phones after prayer at Sree Veeramakaliamman temple in Serangoon Road, one of the key houses of worship in the city state

Dedicated to the wife of the Hindu god Shiva, the temple is packed with devotees at all hours of the day and late into the evening. Hundreds of pairs of footwear of the mendicants can be found in neat rows at the entrance to the temple and it has always fascinated me how the owners find their sandals when they all appear to be the same make, size and colour.

While it is a must-see tourist attraction Little India is no Disney-esque theme park or cultural tourism freak show. It is a vibrant vortex of commerce that appears never to sleep. The main shopping emporium, the Mustafa Centre, is open 24 hours. It is one of the most popular places to shop for Singaporeans and tourists alike. You can buy anything from spices to stoves and bargain clothing, all piled high in the crammed aisles.

Business is perennially brisk but the shop assistants have an uncanny way of finding the most obscure item in the midst of the sea of merchandise. On my last visit I only wanted a little plastic lemon squeezer but almost surrendered before asking a shop assistant, who spoke almost no English, where they might be hidden. Once he had established my needs, off he shot and returned triumphantly with the now-treasured juicer.

The sari shops are glorious kaleidoscopes of vivid colours and glittering gold and do a roaring trade. The other outfitters are marvellous sources of the fabled 360, a cotton wraparound sarong affair worn by men as daywear and by rotund recidivist colonials as comfy night dresses.

The fresh markets are piled high with produce that looks photo-shopped, so vivid are the reds and yellows of the chillis and saffron. Even the coconuts are dusted in a yellow powder to make them voluptuous. The scents of the spices are heavenly and you can spend hours stocking up on all your curry requirements.

The dozens of little family-run grocery shops are themselves treasure troves of Indian delights, from sweet meats to every kind of pickle a gourmand could desire. I always buy a can of Achar Pachranga for all of S$2.50. These delicious and hot pickles are so distinctive, yet finding a can always involves a scratch around at the back of the dusty shelves. The knowing glances of the shopkeepers are a compliment, as few are in on the secret of how delicious the common pickles are.

Food is a frenzied focal point all through the day, from the freshly squeezed mango juice and newly fried morning samosa to the tandoori delights at lunch and supper time. My all time favourite is Khansama’s, opposite the main temple where you can either sit in sweltering splendour on plastic chairs at rickety tables along the sidewalk or upstairs in air conditioned refinement. 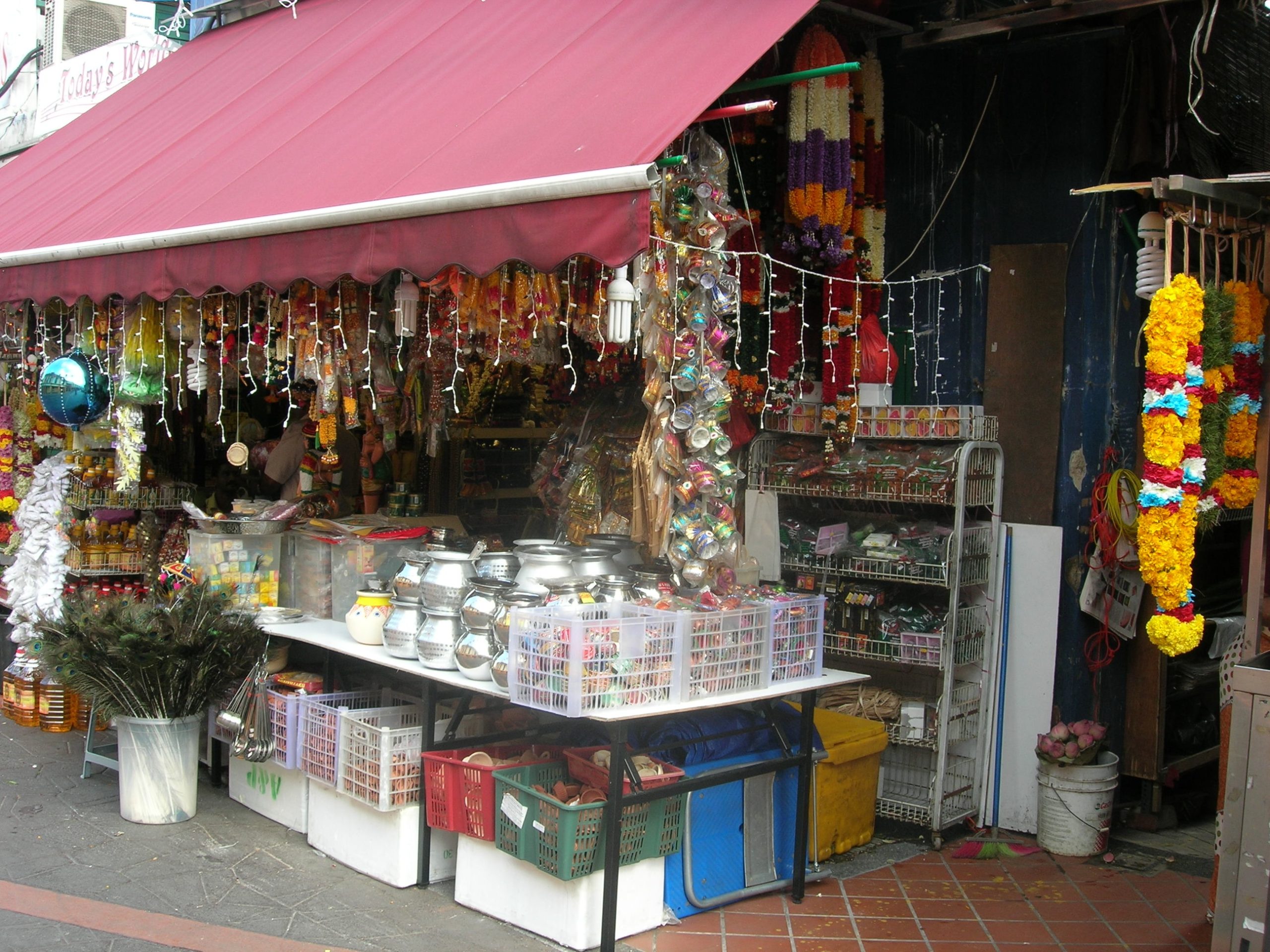 Shiny and bright: Market stalls and family grocers sell everything from garlands to garlic

The cooks and waiters are all imports, many becoming fixtures over the years who remember their favoured customers from afar. The chicken tikka done in the searing tandoor is the food of the gods, and the garlic naans are guaranteed to have you craving more.

There are also working men’s eateries that are so basic and local you feel like an intruder simply by walking in.

Even a haircut in a gents barber is an experience. The little backstreet shops have that ancient hum of Vitalis and the chairs are fresh from a Hollywood back lot set. You rely entirely on the discretion of the barbers as dialogue is stuttered at best.

If you suffer from agoraphobia my best advice is to avoid Little India on Saturday evenings and all day on Sundays or high days and religious holidays. The swarming crowd moves as one as the workers from the construction sites gather on their day off to eat, drink and be merry. Apart from the odd Chinese passer by or a sweating Australian in shorts and slip slops, you would think you were in an Indian town, complete with Bollywood music blaring at every corner.

For all the sensual charms of Little India, the street names are strangely bland except for one or two. For example, Veerasamy Road carries the name of the first Indian doctor to practice Western medicine in Singapore.

Then, around the corner is Buffalo Road named prosaically for the slaughterhouses that used to line the street. One street up is Kerbau Road, kandang kerbau being the Malay term for cattle pens. And Racecourse Road does what it says on the sign, the racecourse of old even doubling as a golf course and landing strip for small aircraft.

Unlike Chinatown across town or even nearby Arab Street, which have an almost ersatz aura about them, Little India feels like the real deal and is worth the effort. It doesn’t take long to walk it flat, depending on how often you stop to bargain with the merchants or have a cool drink, and there are organised walking tours available.

Getting a taxi after dinner, even during the week, is a nightmare so the MRT is a better idea. Little India and Farrer Road stations are easily accessed and the train is a fraction of the price of Singapore’s notoriously complicated taxi fares.

Another great place to eat is the Tekka Market where myriad stalls sell moderately priced delicacies from India, China, Malaysia and Indonesia. The name comes from the Hokkien Chinese word for bamboo, tek-kah, which grew along the nearby Rochor Canal.

Famously waspy and perennially acerbic, Maugham would no doubt have found Little India just a little too gritty for his refined tastes. That said, I am sure he would have been swayed by a succulent cube of Khansama’s finest chicken tikka washed down by a Kingfisher strong lager.