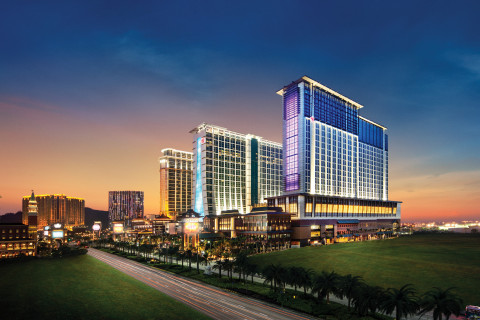 Macau continues to break as many records as possible when it comes to hotels, conference space and casinos, and that’s apart from the fact that the gaming city outstrips Las Vegas as far as gaming revenue goes.

True to form, the Sheraton Macau opened recently to a great deal of glamour and glitz, the likes of which Macau has become  quite the expert. The once sandy reclaimed piece of land that links Taipa (connected by bridge to the city) and the outer island of Coloane, is aptly named the Cotai Strip. It’s on this strip of land that one of Asia’s fastest growing entertainment and gaming centres has grown over the past nearly ten years.

Since then Crown, Wynn, Holiday Inn, Four Seasons and many others have staked an opulent claim in one of Asia’s most popular playgrounds. In two phases, the Sheraton Macao Hotel, Cotai Central opened Sheraton Sky Tower with 1,829 rooms, a 13,000 square foot Sheraton Club Lounge (the world’s largest), the Kashgar Grand Ballroom and additional meeting space.

Coinciding with celebrations of the Sheraton brand’s 75th anniversary, the Sheraton Macao Hotel is the largest hotel to open in 2012, and outdoes all others in Macau as the largest property in the city. As part of Sands Cotai Central, home to The Venetian Resort, the Holiday Inn, and Conrad, the Sheraton is in good company with St Regis next in line to join the luxury entertainment hub.

The hotel’s second tower, Sheraton Earth Tower, is scheduled to open early in 2013 and provide another 2,067 rooms as well as two more outdoor swimming pools.

With its close proximity to Hong Kong, and construction of a series of bridges and tunnels that will connect Hong Kong, Macau and Zhuhai in mainland China (the Pearl River Delta), it seems Macau can expect an increasing flow of visitors keen to sample the luxuries and spectacle created by such a massive investment by the global hospitality industry.