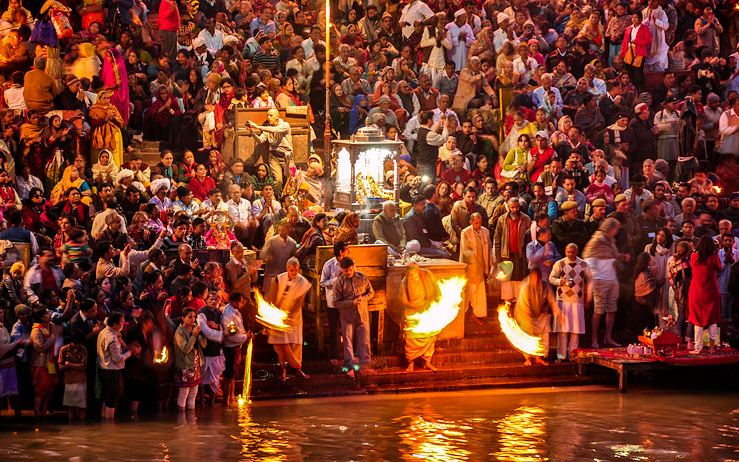 As the sun rises on the banks of the holy Sangam, bare feet make their way towards the glistening river shimmering in the morning sun. As the early morning mist clears, the view of saffron clad bodies covered in ash, moving in unison, with a prayer on their lips, and devotion in their hearts, reveals itself. As the crowd moves closer to the river, you can feel the hair on the back of your neck stand up, and your heart surrender in devotion. The multitudinous Kumbh pilgrimage is truly a hypnotic journey that every traveller must experience.

Historically, India’s Kumbh Mela finds its roots in Hindu mythology, where the gods and the demons fought a celestial war and churned the holy rivers to produce an elixir of immortality. As the gods flew away with the elixir, four drops were spilled at four different places (River Ganges, River Godavari, River Kshipra and River Sangam, the confluence of rivers Ganges and Yamuna) which became the holy lands of repentance. Pilgrims believe that by immersing oneself in these holy rivers washes away sins and unites the soul with the Almighty. 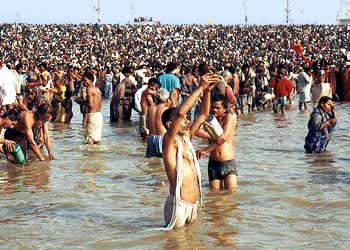 Large processions gather around the banks of the river as prayerful pilgrims immerse themselves in supplication into the icy cold water. The holy water of the river is believed to be ‘Amrit’ or nectar, and anyone who bathes in it will attain salvation. Other activities include devotional singing, religious discussions, mass feeding of holy men and prayers to Lord Shiva (the destroyer).

Quoted by Time Magazine as the ‘Holiest Day in History‘, the Kumbh Mela attracts enormous numbers of tourists from all corners of the world and in 2007 according to mela administration estimates, the festival attracted over 70 million people. After experiencing the Kumbh Mela for himself in 1895, Mark Twain wrote:

“It is wonderful, the power of a faith like that, that can make multitudes upon multitudes of the old and weak and the young and frail enter without hesitation or complaint upon such incredible journeys and endure the resultant miseries without repining. It is done in love, or it is done in fear; I do not know which it is. No matter what the impulse is, the act born of it is beyond imagination, marvellous to our kind of people, the cold whites.”

The 2013 Maha Kumbh Mela will take place in the city of Allahabad, India between January 27 and February 26. Apart from bearing witness to this massive pilgrimage, the city of Allahabad offers a rich and fascinating history with many beautiful heritage sites. Some of the more interesting include the Allahabad Fort, the Patalpuri Temple, Ashoka Pillar, Khusro Bagh, Hanuman Mandir and many ancient temples. The city is well connected via air, rail and road and you can book direct flights to Allahabad Domestic Airport (IXD). There are also several accommodation options to choose from to suit every kind of travel preference. Weather conditions during January and February are very pleasant with minimum temperature reaching 12 degrees centigrade.