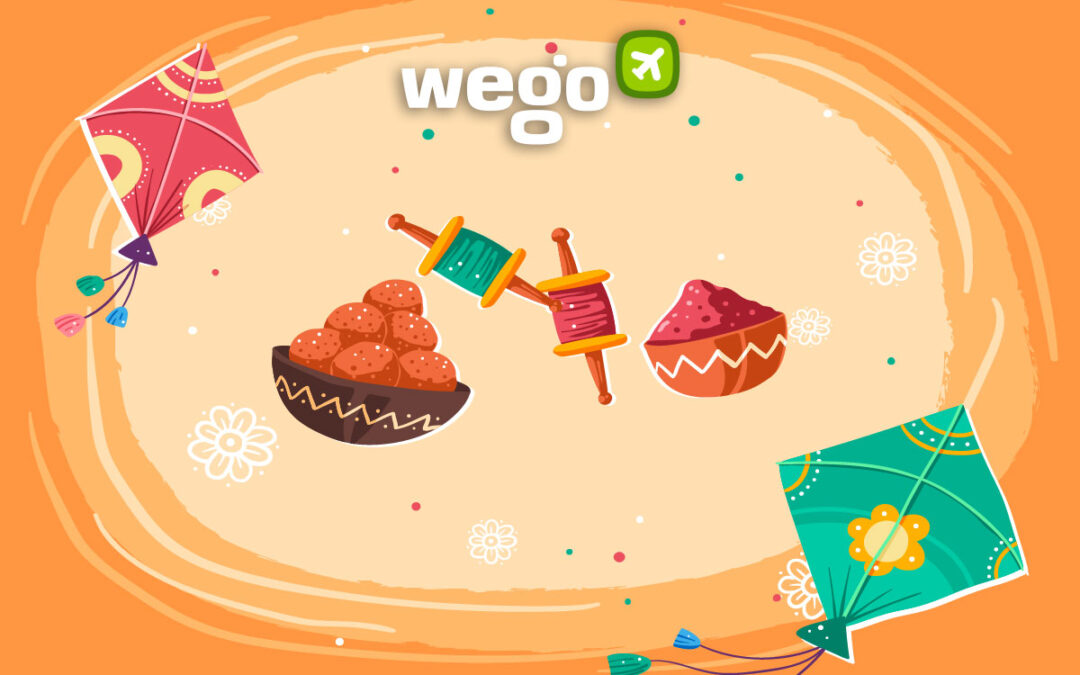 Makar Sankranti 2021 – When and Where Is It Celebrated?

In the cold of mid-January, India comes alive in the celebrations of Makar Sankranti, and celebrations are as diverse as they could get! From monikers to legends associated, different communities across states celebrate the winter solstice in their own unique ways.

When is Makar Sankranti in 2021? What are the dates and tithi of the celebration in different parts of India? Read along to find out in detail.

Makar Sankranti 2021 Date is decided by the Hindu solar calendar and is on the first day of the 10th solar month Magh when the Sun is making a transition from Dhanu Rashi to Makar Rashi (in English, you would know it as Capricorn Zodiac sign). The month is also the coldest in the Hindu calendar.

Most years, it would fall on 14th January (or 15th January) as per the Gregorian calendar and is observed the same day if the ‘Sankranti’ occurs before sunset. If otherwise, it is celebrated on the next day. 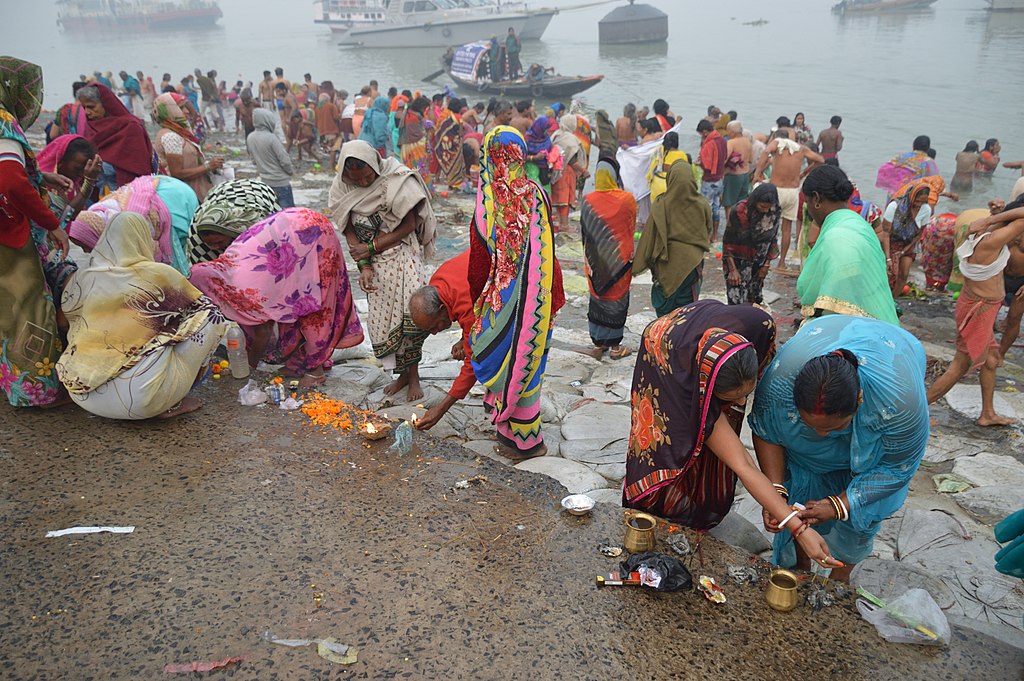 In 2021, Makar Sankranti will fall on 14th January (according to Drik Panchnag).

Sankranti is a gazetted holiday in India and lasts from two to four days in most states. Given below are the dates of the different celebrations in

How is Makar Sankranti celebrated? 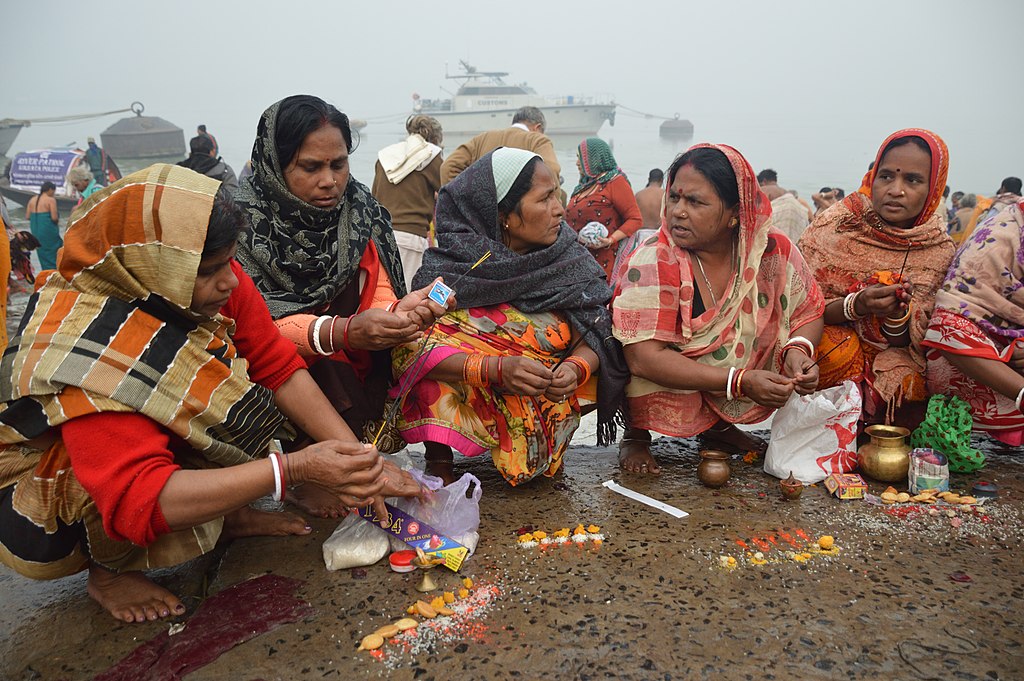 Hindus worship the Sun God or Surya Deva, and therefore, Makar Sankranti is an auspicious day in the Hindu calendar for the worship of the Lord. Although there are 12 Sankrantis in total, Makar Sankranti is paramount of all and hence is accompanied by several spiritual practices with nationwide celebrations.

Devotees take a religious bath in the waters of the Holy rivers such the Ganga, Yamuna, Godavari, and others. It is a sign that all their sins have been washed away, and prosperity will prevail from now on. Apart from the worship of the Sun God, people also pay homage to livestock and cattle. They also perform charity activities and donate food and clothes to the less fortunate ones.

A popular Hindu belief goes, if someone dies on Sankranti, they are not reborn; instead, they go to Heaven. 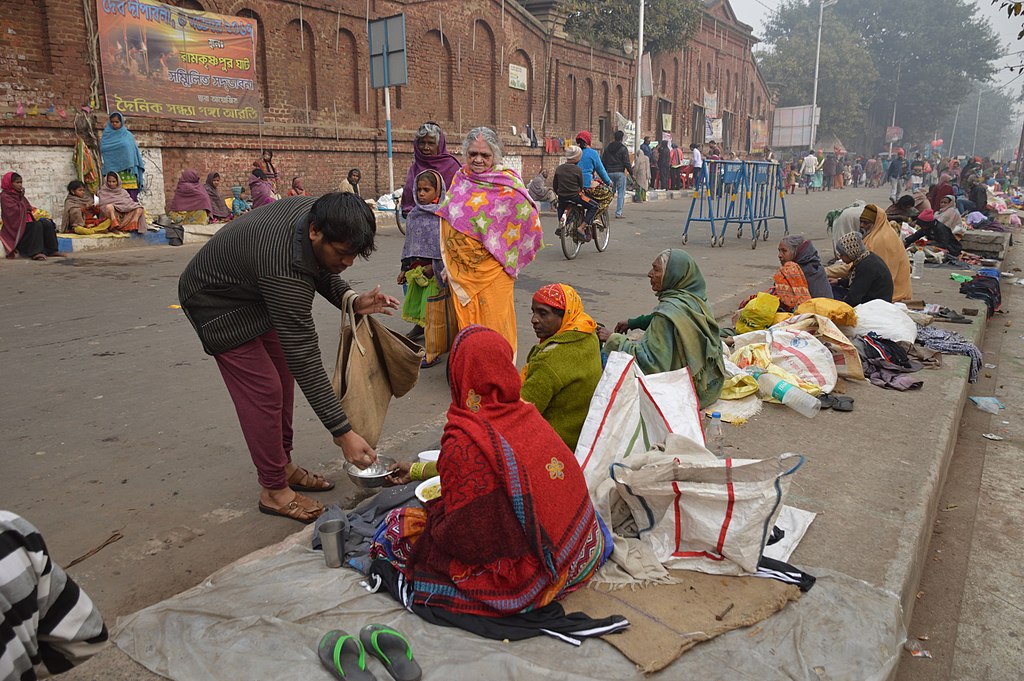 Some places observe Sankranti as the day of Uttarayana. Uttarayana comes from Uttara, meaning north, and Ayana, meaning six months duration or the day of Winter Solstice when the Sun begins its journey northwards. In several other parts of India, the zest of Sankranti is embodied in the Harvest Festival since the harvest season coincides with this time of the year.

Food being a major part of the celebration during any festival in India, Til (sesame) and gur (jaggery) laddoos are widely popular as the sweets of Sankranti in India.

Every twelve years, along with Makar Sankranti, people also gather for Kumbh Mela (also well-famed as one of the world’s largest mass pilgrimage). The next Kumbh Mela will be held in January of 2021. 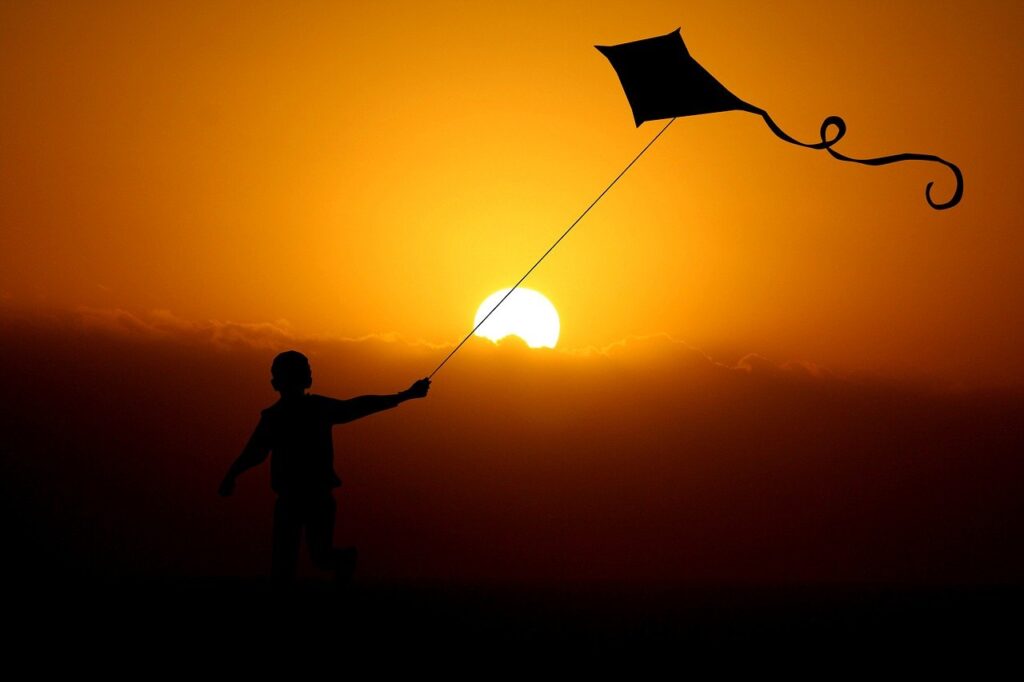 One of the most vibrant sightings during the festival of Makar Sankranti is the flock of colorful kites being flown in the winter morning sky. Kite flying competitions are also organized at many places. Many consider this fun practice to be a form of thanksgiving to the Gods since kites can be flown high up in the sky, closer to what some believe to be Heaven.

Black is often considered to be the color as Makar Sankranti, even as black is widely heralded as an inauspicious color when it comes to festivals and religious activities. The reason for association with Sankranti is, however, more of a customary scientific belief than a religious one.

The black color is known as an absorber of the rays of the Sun, and since during Makar Sankranti, the Sun begins its journey towards the Northern Hemisphere, people believe that wearing the black color will help them absorb all the good energy of the Sun as well as keep them warm during the chilly winter days of celebration.

Although a dying practice in modern times, you could still spot a woman or two wearing black sarees of a particular pattern called Chandrakala during Sankranti.

Makar Sankranti is celebrated unanimously in India. While the festive spirits remain the same throughout, Makar Sankranti takes myriads of forms and names throughout the country, with a variety of legends to go by as the origin of the celebration in any particular state.

Khichdi is the name of a dish made of rice and lentils, and in North Indian states like Uttar Pradesh, Khichdi is given out as donations during Makar Sankranti. Hence the name of the festival becomes Khichdi at these places. Clothes, blankets, and even gold are added to the donations at times. In addition to making charities, people fast during the day time. In Gorakhpur, a massive fair is organized known as the Khichdi Mela.

Sankranti is celebrated as a harvest festival called Magh Bihu in Assam and the rest of North-East India. Makeshift huts called Bhelaghar or Mejhi are erected where friends and families flock together for a feast around a bonfire, and once it is over, the huts are burned down the next day. Several places in the state also host traditional games such as buffalo fighting and pot-breaking (tekeli bhonga). 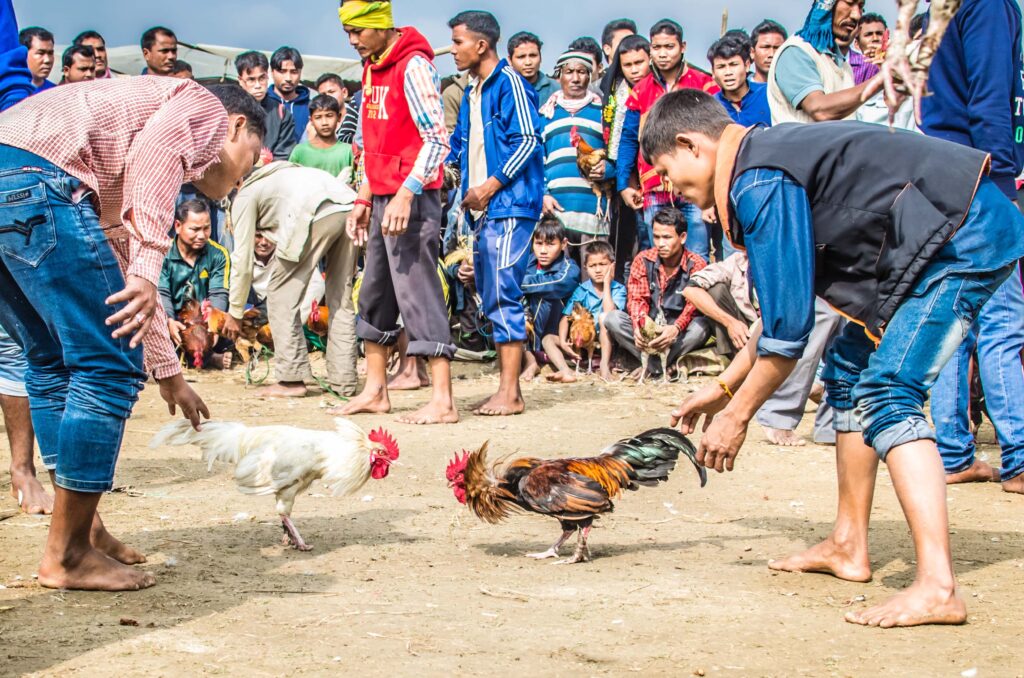 Assam is also famous for Jonbeel Mela, which is held during the weekend of Magh Bihu and is based on a barter system – yes, a fair without any currency!

Sankranti is a Hindu festival, but it also finds its observance amongst the Sikh community and even some Muslims in Punjab as Lohri, a day before Makar Sankranti (also known as Maggi in Punjab). Apart from remembering Sun God Surya and celebrating winter crop season, Lohri also pays tribute to fire God Agni and is thus marked with the lighting of a bonfire. Bhangra and Gidha are performed in circles around the bonfire.

Youngsters go around collecting logs, gur (jaggery), grains, and other items for the day of Lohri. Some even play a local form of trick or treat and visit houses in their neighborhood, singing folk songs.

In Lord Ayyappan’s holy shrine of Sabarimala, Kerala observes Makar Sankranti as Makaravilakku and is marked by the Thiruvabharanam (the lord’s sacred ornaments) procession and congregation. The temple witnesses over half a million devotees who visit Sabarimala on Sankranti for the Lord’s darshan. 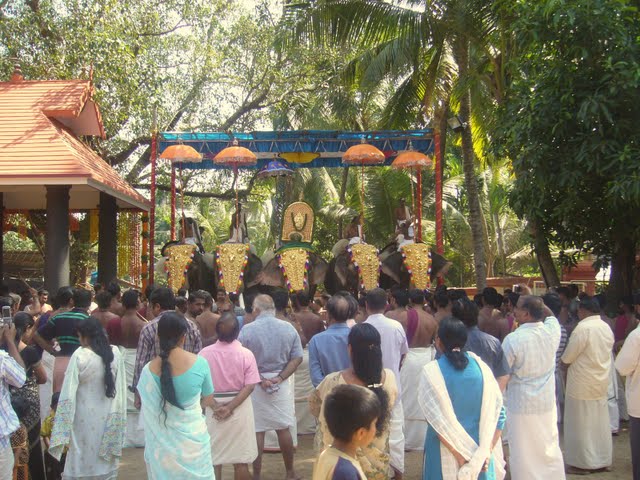 Aarti or Deeparadhana is performed in the temple, and the lamp lighted during the ceremony is termed as Makara Vilakku. The light can be sighted from a number of places, an opportunity that devotees await as a part of the religious celebration.

In Andhra Pradesh, Makar Sankranti is also termed as Pedda Panduga. Telegu women decorate the entrance of their houses with Rangoli or Muggu and prepare traditional Telegu food and sweets such as bobatullu, paramannam, pulihora, ariselu, etc. In many villages, you would spot a decorated bull (gangireddu) with its master, accompanied by a flute and drum as they visit one door to another.

Every year during Makar Sankranti or Poush Sankranti, West Bengal witnesses the organization of a huge fair at Ganga Sagar, the largest of its kind in West Bengal. Aartis are performed at the fair too to thank the Sun God for his bountiful blessings as devotees also perform the ceremonial cleansing by taking a dip in the holy water. In this part of the country, rice sweet called pithey are the staple when it comes to Sankranti sweets, and there are multiple variants of the same, including Gokul pithey, patisapta, Dudh puli, etc.

This time in 2021, several new measures are being taken at Ganga Sagar Mela, keeping in mind the challenges of crowd control during COVID-19, such as sending out the holy water of the river to devotees by post. Rituals will also be live-streamed across social media.

Pongal is the name of a sweetened dish of rice boiled in milk and jaggery that people in Tamil Nadu consume ritually during Makar Sankranti and hence imparts the name of the festival in the state. It is also known as the thanksgiving festival for the year’s harvest. Celebrated over four days, different animated rituals mark the days of Bhogi Pongal, Surya Pongal, Mattu Pongal, and Kanum Pongal. Kolam or rangoli is also a major part of the festivities in the state.

The pataang or kite festival during Makar Sankranti is most prominent in Gujarat. Preparations in Gujarat start months before January for the International Kite Festival Uttarayan, with people flocking from international destinations such as Italy, Malaysia, Japan, etc. Almost in every locality, you’d find makeshift kite selling stores being set up and turning the whole place into a Pataang Bazaar.

Here’s wishing you all a day of grand celebrations and prosperity. Happy Makar Sankranti! 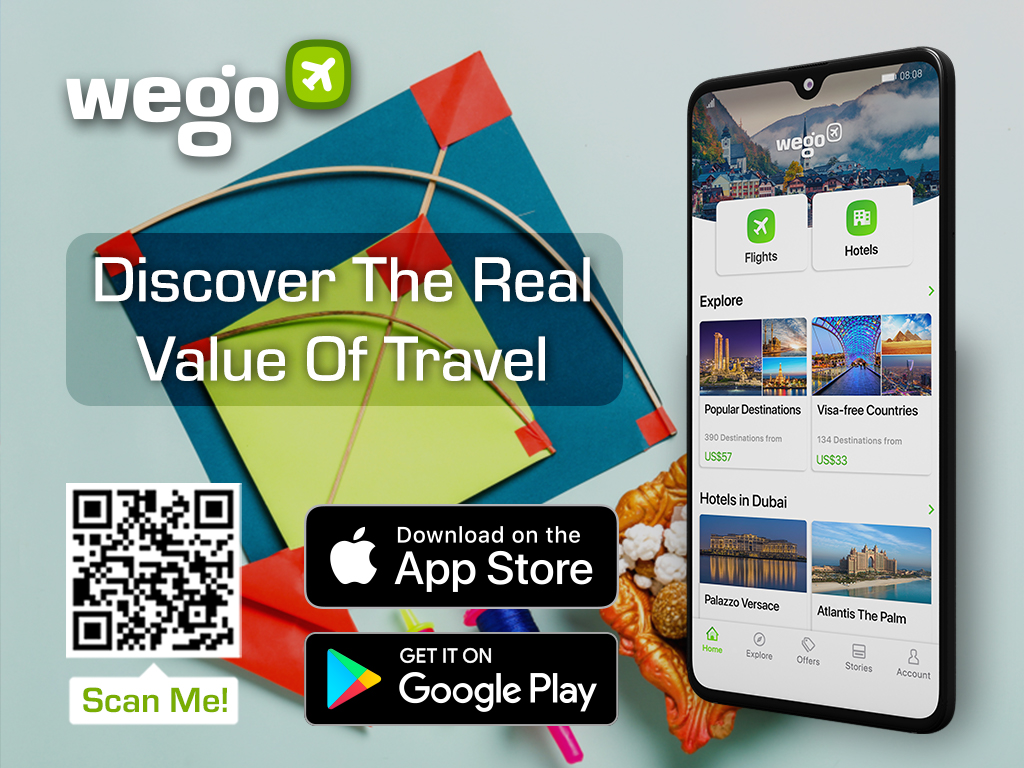