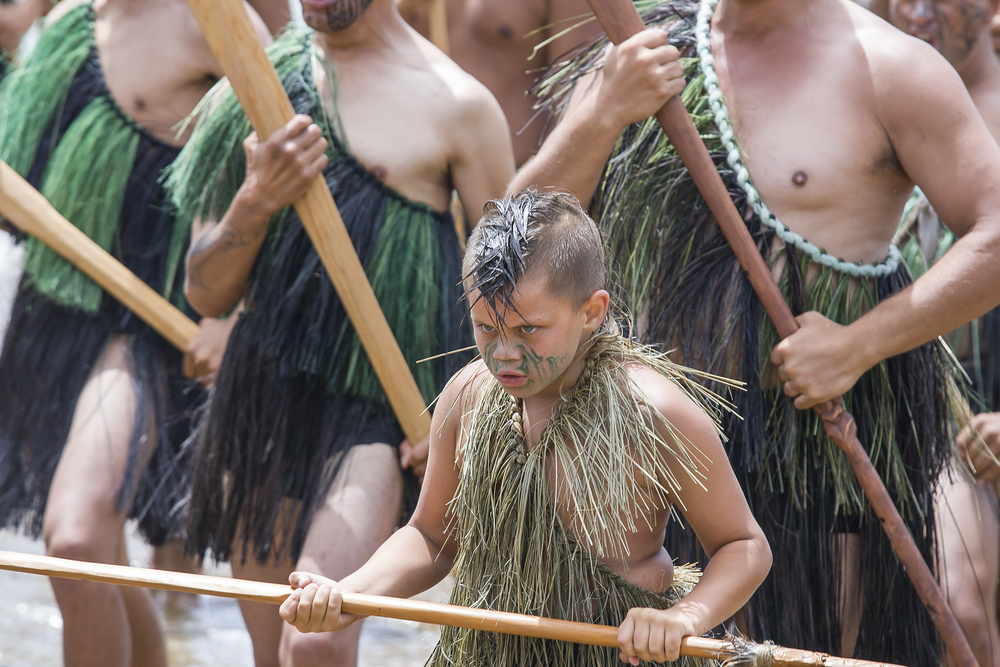 This evening I am in a forest of giants. I stand with my head tilted far, far back to try and take in the top of Tane Mahuta 51m above me; the biggest tree I have ever seen and one which first sank its roots into the earth around the time of Bronze Age man.

The Waipoua Forest is filled with the sounds of nocturnal wildlife astir but also the chanting of my guide. It is all in Maori so I don’t understand a word but the obvious sentiment and respect need no translation. It is incredibly stirring.

Tane Mahuta, the biggest of the Kauri giants

This is not the first time I have been honoured with a glimpse into the Maori world as I have travelled around New Zealand—some experiences looked for, others having arrived by beautiful chance.

Unlike the Aboriginal peoples of Australia, Maori have not always inhabited the lands they now call home, arriving in canoes from Polynesia around 700 years ago and 300 years before the first Europeans. Even today, all those of Maori descent can trace their lineage back to which canoe their ancestors arrived in.

Learning about and sometimes even being allowed to share something of any indigenous culture is always a privilege for me. However, that of the Maori is, to my mind, exceptional.

It is especially rich in ceremony, ritual and tradition and while that can be said of many places in the world those of the Maori are not simply a nod to history but very much alive and breathing.

Today, for example, when officials, neighbouring tribes and other special visitors are received at sacred Maori meeting grounds – known as marae – they are welcomed with exactly the same ‘powhiri’ ceremony of dance and song as those of long ago.

I was already aware that the Maori are traditionally a warrior people by the time I witnessed my first ‘wero’, part of the traditional welcome, but that didn’t stop me feeling something approaching total intimidation.

Now I know that the days of tribal warring are firmly in the past and this spine-tingling challenge is now purely ceremonial. But if you think you could stay quake or flinch-free as several barely clad and very large men with fierce face tattoos come leaping and posturing towards you, eyes bulging, screaming battle cries and waving weapons then just try it.

The beautifully carved interior of a meeting house

Besides their reputation for performing unnerving dances and hakas the Maori are also known as master carvers. While undoubtedly incredible works of art, in reality these buildings are not simply decoratively lovely, adorned with rainbow-hued paua shell and jade known as pounamu, but also hugely symbolic.

Every single figure, every panel and every design represents something, from the tribe’s ancestral story to their legends.

Maori rock carving in the rock on Great Lake Taupo

And I have found those legends everywhere I have wandered in New Zealand, over both North and South Island. My first experience of this was when I was in Wellington and someone I was chatting to referred to going down to Auckland. Now my sense of direction is notoriously bad but even I knew Auckland was north of here.

The explanation – the creation of New Zealand according to certain Maori legend. The South Island is the waka or canoe of the demigod Maui, the North Island the fish he hauled out of the ocean with Auckland representing the fish’s tail.

There is also the explanation of why Mount Taranaki sits brooding apart from his other North Island high-peak counterparts. According to Maori legend this is where he fled after losing a great battle, fought to decide who should win the hand of the maiden mountain of Pīhanga.

In the space of almost 2 years I explored as much as I could about the Maori way of life, from learning about the traditional practice of face tattoos to watching carvers at work. I took part in a traditional feast where the food is cooked in a buried oven, went along to time-honoured canoe festivals, tried my hand at flax weaving under the expert eyes of a Maori friend, admired dancers spinning poi (which looks deceptively easy but let me tell you is not) and shared hongis.

The lovely traditional greeting of the hongi

This greeting – which to me is the most beautiful of the Maori traditions – seems to the uninitiated as a touching of the noses but has a meaning and purpose far beyond what it appears. In a hongi two people share a breath—the very essence of life—and it is something incredibly intimate and exceptionally special to experience.

Everywhere I went I learned a little more. Perhaps a chance meeting on a park bench, a conversation struck up while out on my surf board in the ocean and once because my van broke down in the middle of nowhere.

I left it being looked over after I had limped it into a tiny settlement and wandered into a Maori-owned shop selling hand-made jewellery and carvings to kill some time.

Everything was beautiful and had I had cash on me I would almost certainly have bought something. As I turned to leave with a thank you to the lady owner who I had briefly chatted with, she called out to me to wait. I watched as she removed a jade pendant I had been admiring from a stand and slipped it over my head where it remains to this day. ”A gift,” she said, ”Pounamu has a lot of power and even more so when it is given and not bought.”

What on earth do you say at times like this? When a perfect stranger does something for which they can have no expectation of reward of any kind? I still don’t know why I did what I did next—it was merely something straight from the heart. The hongi is a greeting, not a way to express inexpressible thanks. However, right now it felt appropriate and this lady, who I would never see again, seemed to understand why without words I gripped her hand and, placing my forehead to hers, shared a breath.