For years it seems the imposing old facades of Singapore’s former City Hall and Supreme Court have seemed stopped in time, their purpose arrested and their point missing.

But all that changed in November 2015 when the two old grand dames of the Padang joined hands and became one and the doors of the National Gallery Singapore were opened to the justified gasps of local and foreign visitors.

It is urban renewal at its finest and with the incredible foresight of the city fathers, not to mention a cheque for S$532 million (US$378 million), Southeast Asia’s most spacious and comprehensive art gallery has been created.

On a global scale it is in the league of, say, the Tate Modern in the old Bankside power station in London, or the Reichstag in Berlin. The ambition of the National Gallery Singapore is, as its ceilings, vaulting and impressive.

With 64,000 square metres of floor space, some 8,000 artworks on initial display, snazzy restaurants and a rooftop bar terrace, the new National Gallery Singapore is destined to be one of the most popular venues on the island.

You don’t even have to be interested in art to make a day at the gallery. The architectural brilliance and the sensitive restoration combine to make for a pleasurable spatial experience. Finding your way around takes time but, eventually, you work out the flow.

While distinctly different in style, both original buildings are from the same colonial era and have witnessed the highs and lows of the now 50-year-old city-state. The City Hall, with its 18 Corinthian columns, was built between 1926 and 1929, while the Supreme Court opened in 1939. 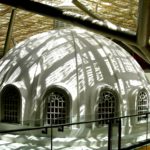 They are distinctly different in architectural style, which posed a unique challenge for French architect Jean-Francois Milou and his vast team of international and local Singaporean experts.

Linking the building is a spectacular atrium that features Milou’s solution, a so-called “linear draped canopy” which is supported by bold, tree-like columns. The effect is both stunning and novel, because the transition between the two architectural eras is seamless and soaring.

The project has also created a truly green environment, complete with solar energy, a striking water-cooled transparent ceiling, state of the art lighting, acoustic controls and maximum use of natural light on all levels.

The National Gallery Singapore takes its rightful place alongside such worthy conversions as The Fullerton Hotel, which was the old post office, and a host of historic buildings that are now home to galleries, museums, entertainment facilities, and stand-alone districts of interest such as Chinatown and Little India.

In keeping with its reputation as an early adopter of technology, the National Gallery Singapore has a free Gallery Explorer application that can be downloaded to smartphones. While it looks as if many of the young visitors are glued to Line or WhatsApp, they are actually being studious and following the explorer instructions!

On the top floor of the City Hall wing can be found a very stylish bar and terrace called Smoke & Mirrors and a very elegant restaurant called Aura. The views are worth the premium you pay for food and drink and night time reveals a son et lumiere show all of its own. The lights of Marina Bay are mesmerising and the sounds of the seasonal rain splashing on the Padang and street below are a perfect accompaniment.

While now completely at home in the new millennium, the City Hall building is steeped in history, being the location where Lord Mountbatten accepted the surrender of the Japanese forces on September 12, 1945.

The imposing fa§ade of the newly-connected old Supreme Court and the City Hall. Spotless and purposeful

The building also once housed the offices of founding father Lee Kuan Yew, the first prime minister of the island state. Next door the Supreme Court was witness to every serious civil and criminal case until its demise in 2005.

Still photography (no flash) for non-commercial use is permitted.

Photography is sometimes not permitted in the special exhibition galleries, which are on levels 3 and 4 of the City Hall Wing. Please check with security personnel if you wish to take photographs in these galleries.”

Entrance is S$20 for adults and $15 for children, although, for now, admission is free for Singapore citizens and permanent residents (PR).