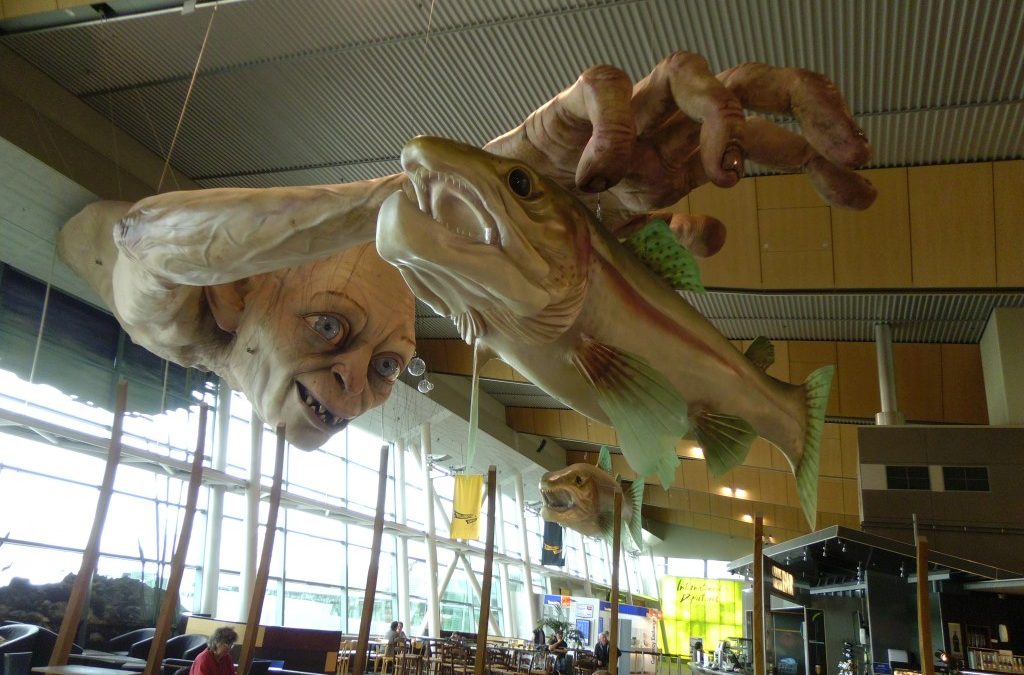 One movie to bind them: New Zealand revs up Lord of the Rings fever

With the first of The Hobbit trilogy films about to hit cinemas in December, Lord of the Rings fans are unabashedly excited. And so is New Zealand.

Gandalf now looms before a Hobbit-style door atop Wellington’s Embassy Theatre awaiting the film’s premiere. The eerie creature Gollum, hangs from a roof over Wellington International Airport and if you look up while strolling ’Windy Welly’s’ harbour you’ll see Bilbo marching off on his quest with dwarves in tow, on the New Zealand Post building.

These impressive structures were erected recently in tribute to the second wave of Lord of the Rings fever washing over New Zealand. The first followed the success of the award-winning movie trilogy, but this time the hype is being built prior to its release.

The world premiere of The Hobbit: An Unexpected Journey, takes place at The Wellington Embassy Theatre today, 27 November 2012, with the film hitting cinemas on December 12. The movie is the first in a trilogy depicting the prelude to the classic The Lord of the Rings book series – J. R. R. Tolkien’s ‘The Hobbit’.

New Zealander Peter Jackson is back at the helm, directing with the same passionate style for both the films and his beautiful country that provides the perfect backdrop to Middle Earth. At today’s premiere, he will walk the red carpet alongside Kiwis and Hollywood stars, passing right under Gandalf the Grey on their way into the cinema.

It’s not commonplace for a world premiere of this scale to be held in New Zealand, hence the enormous excitement and anticipation of this glitzy international event. The country has put on a flurry of Hobbit-themed activities, with Tolkien’s fantasy characters popping up everywhere. They’ve even taken to the skies.

Air New Zealand recently unveiled a Hobbit-themed baggage carousel and also released a humorous flight safety video complete with Lord of the Rings characters, an animation of Gollum by Weta Workshop and a cameo by the director. The promotional video, which went viral with over 9.4 million views to date, is another collaboration between Peter Jackson’s team and well, the whole of New Zealand it seems!

The city of Wellington, where Peter Jackson lives, is particularly enthused. Wellington’s Mayor has officially renamed the city ’The Middle of Middle Earth’ for the week of the premiere. Visitors arriving at Wellington International Airport are being greeted by signs welcoming them to the (otherwise) fictional realm in which the books are set and Hobbit-themed events and locations feature front and centre on Wellington’s tourism site.

All the additional fun is just icing on the cake of the destination promotion that the country has been enjoying following the success of the trilogy released between 2001 and 2003. Fans have been flocking to New Zealand to experience the fellowship and the breathtaking landscapes which brought J. R. R. Tolkien’s vivid novels to life ever since, and that includes me.

Last year, I had the opportunity to look upon Mt. Tongariro (aka Mount Doom); and dip my toes into the river from my favourite scene where Arwen saves Frodo from Ringwraiths. Wandering about the enchanting Hobbiton movie set was especially surreal. The rolling green hills and adorable Hobbit holes are exactly as you see them in the movies. Just think, Frodo and the hilarious Pippin have stood where I stood. Or is it the other way around?

Across New Zealand, fans like me have been touring movie locations; facing full-scale Uruk Hai replicas in the Weta Cave; trekking across Mount Doom and now, almost ten years on, New Zealand is offering additional Middle Earth themed treats. The huge scale of celebration seems to signify that the country whole-heartedly embraces all associations with Peter Jackson’s movie-making magic.

“We wanted to celebrate these momentous movies in a very public way, which reflected the enormous positive impact which comes from having films like these produced in New Zealand’s capital,” said Simon Allison, spokesman of New Zealand Post.

The Hobbiton Artisan Market is most interesting. The five-day Hobbit-fashion outdoor market features the work of local Kiwi artists, such as costume designers and Weta sculptors who worked on the Hobbit trilogy.

You would think walking about Hobbiton would be enough, but I’m really not thrilled about missing out on all this. I’m finding it hard to resist a cheap flight to New Zealand right now to hang out with Gandalf, have a pint with Orlando Bloom, watch screenings of the first trilogy for the fiftieth time, and be among the first to see the movie. I wonder if the Elves could teleport me?

Check out https://www.facebook.com/TheHobbitMovie to catch the live stream of the premiere and more details on the movie or teleport yourself there with a great flight deal from www.wego.com/flights.