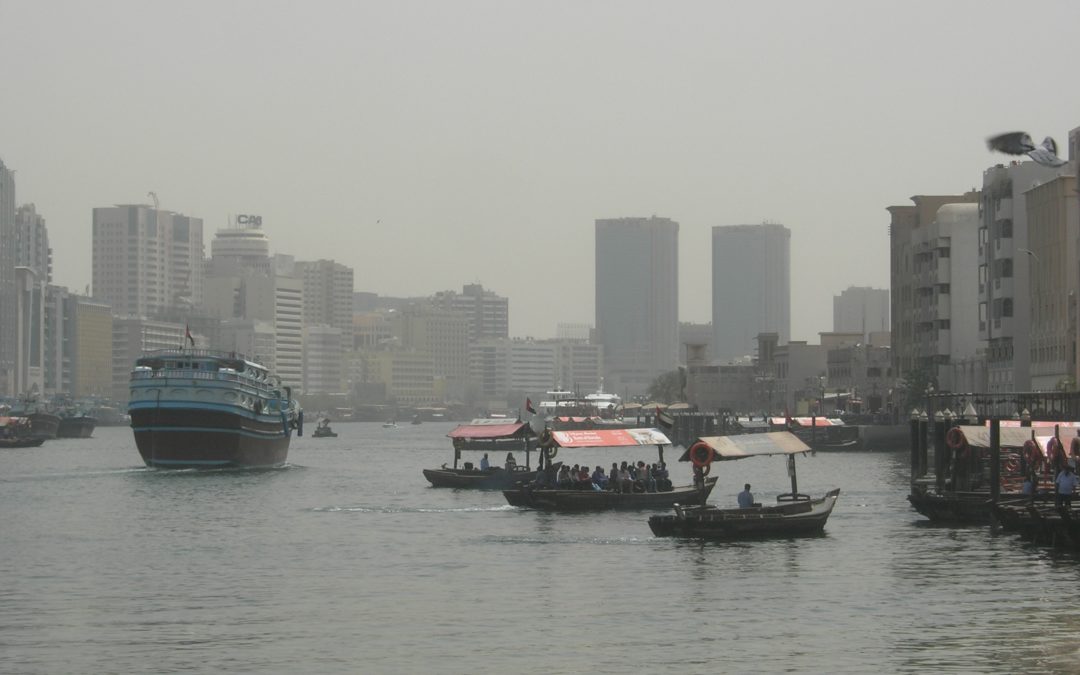 There is more to that desert mirage Dubai than soaring office towers and over-the-top luxury inns. If you scratch the surface, you will find a real world far removed from the Costa Plenty of the Gulf.

For less than a dollar you can take a wooden abra across Dubai’s fabled Creek, the waterway that gave birth to the pearling village of old and permanent home for desert tribesmen. It is the best value transportation in the world!

With up to about 30 passengers sitting tightly pressed in two rows you can encounter folks for dozens of countries, all making their living in Dubai yet as far removed from the Ferrari and Roll-Royce set as you can imagine. 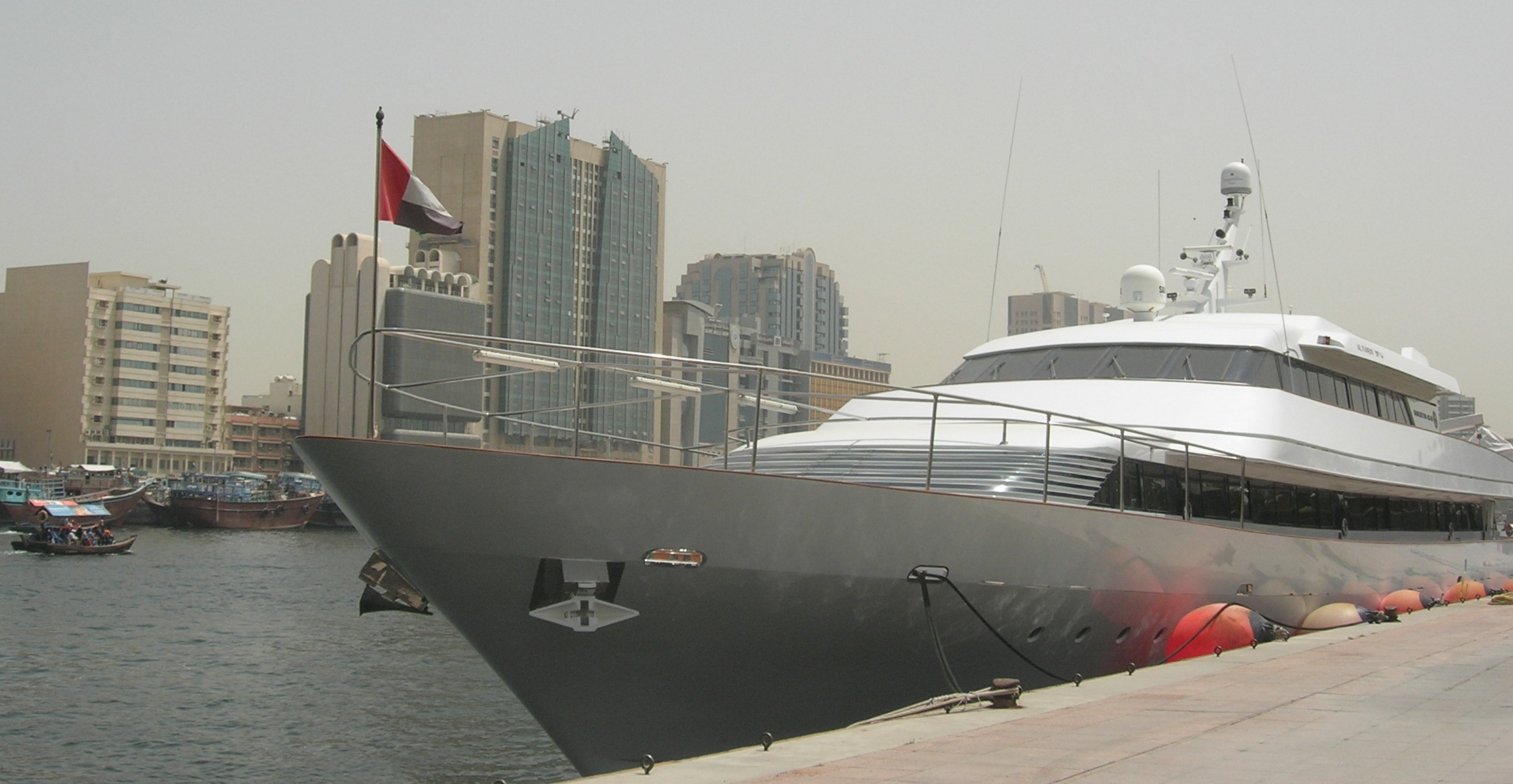 The boats of Dubai, an abra chugs past a sheikh’s gin palace private yacht

The polyglot, the Babel, the entrepot, the muezzin calls five times a day from myriad mosques, the purposeful dhows, piled high with home appliances bound for South Asian ports, the flashy Italian-built private yacht of a sheikh, the market touts, the wind towers, the fresh mango juice, the dawn samosa.

This is my Dubai.

I first sailed up the Creek on a luxury dhow from Italy in 1985. Built by an eccentric Italian billionaire to the exact specifications of the old trading dhows, the renamed Ambasher (which roughly means serendipity in Arabic) was bought by some rich Qataris and I was one of six western deck hands tasked with delivering the beautiful craft to her future home in the Gulf.

Antonio was the skipper, fat and beaming Mario the cook and deck hand, three non-descript Brits and me.

Imagine the stir the ersatz replica dhow caused, with its shiny taps and microwave ovens, genuine sails and motley crew, when tying up in the shadow of the Intercontinental Hotel, then the only posh hotel in town.

It was then that I found a calling to this tawny desert port. To see it today through those awestruck eyes of my 20s is to wonder what the hell happened. 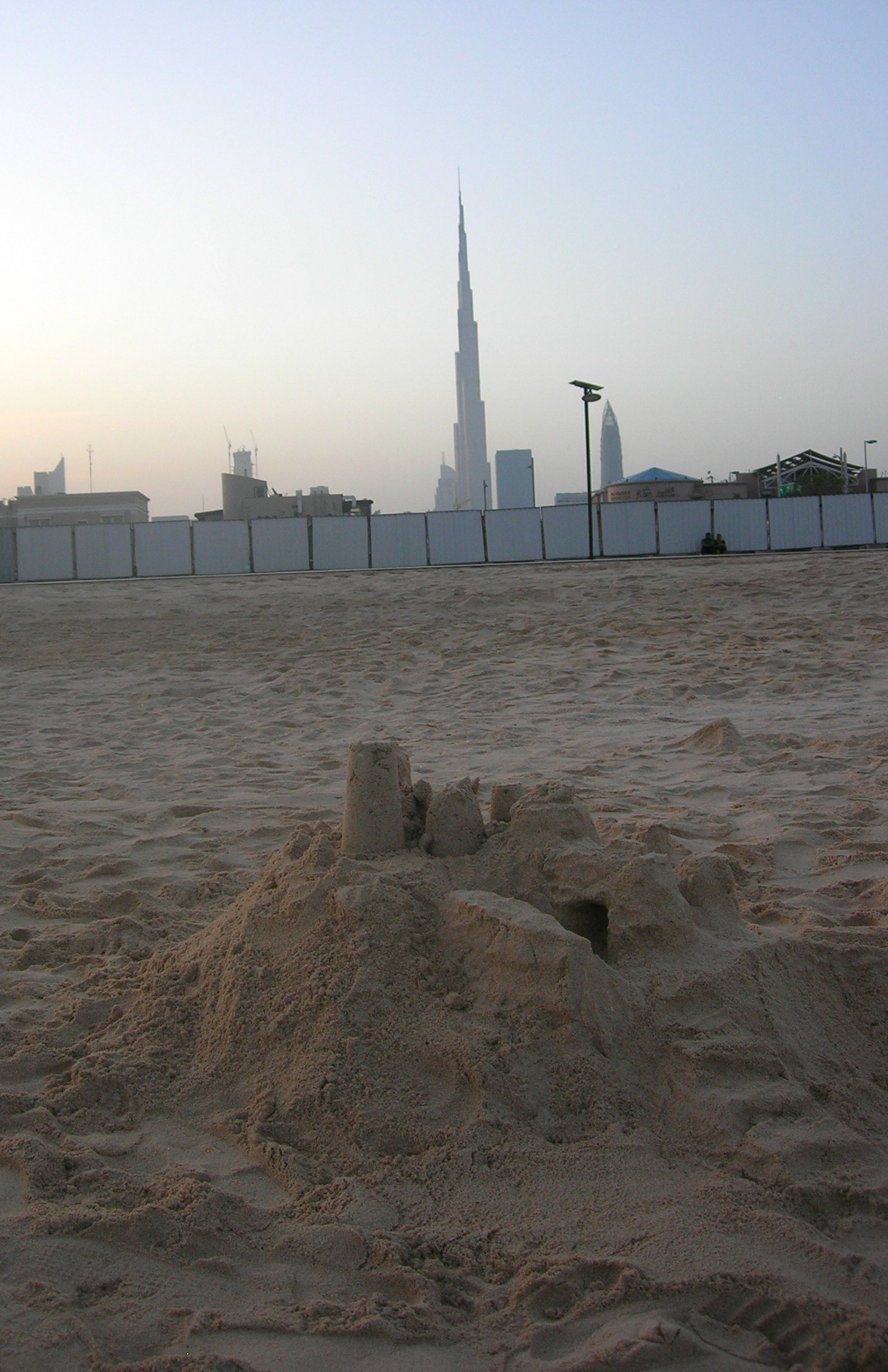 Castles in the sand, Burj Dubai, the world’s tallest building”¦ and a humble sand castle at dawn

But forget the world’s tallest building, Burj Khalifa, the palm islands, the 14-lane highways, the cavernous airport terminal, the gleam of a million Maseratis. It is still the working waterway that is the life force of Dubai.

Once home to pearl diving and fishing boats, the Depression and invention of cultured pearls in the 1920s and 1930s changed life here for good. The Creek became a trading post, a true entrepot. It remains that today.

Deira is the thriving part of the old city where commerce is king and you can find Chinese traders selling porcelain cheek by jowl with Sikhs exporting spices and Iranians selling kitchenware. 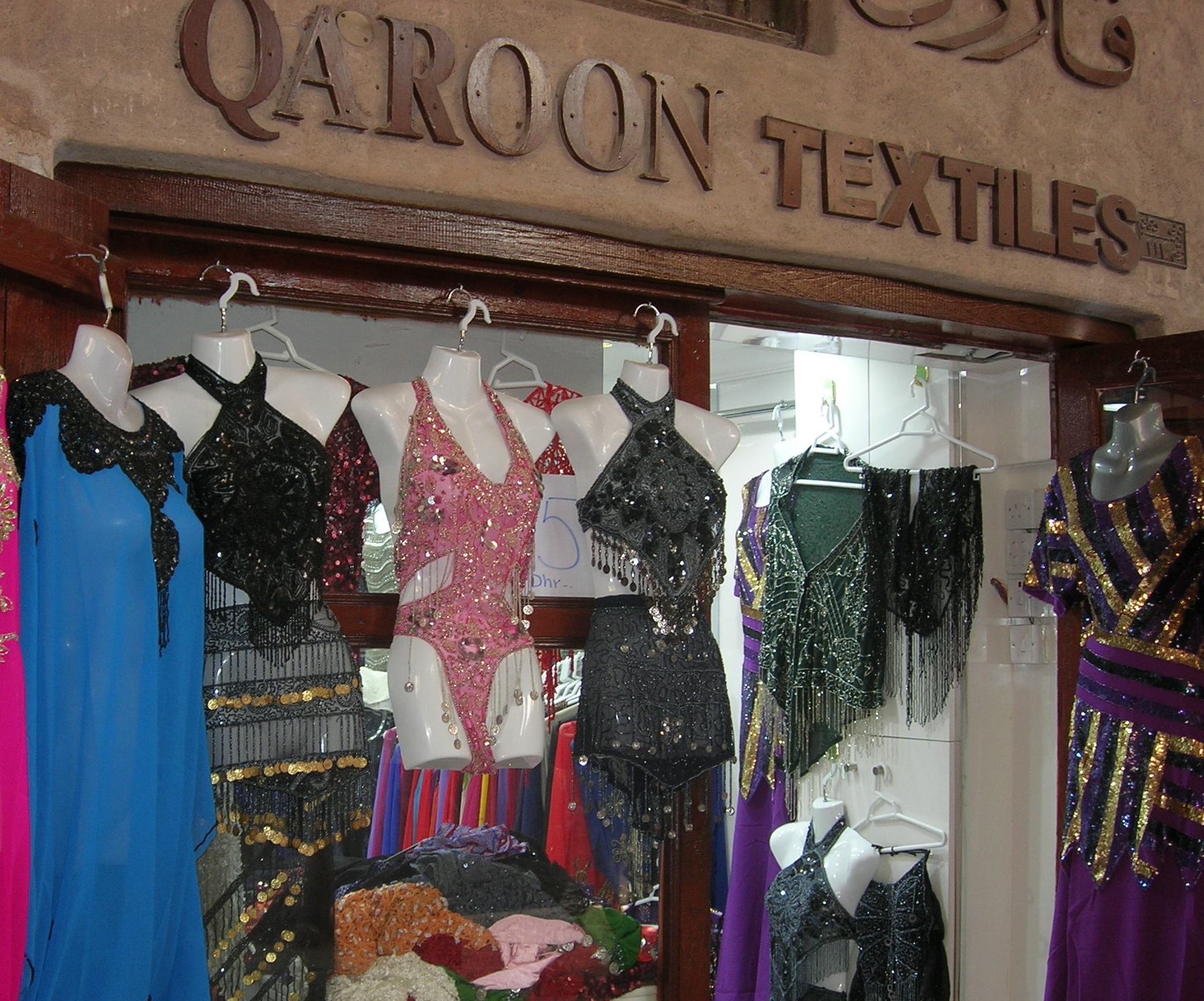 Dubai couture, something for everyone

The Gold Souq is famous for its shiny yellow gold offerings, fake watch touts and some of the most tasteless jewellery known to man. But rubber necking tourists find their way there, convinced they are getting bargains. But the wily shopkeepers have seen it all before, for decades and know how to play a haggling tourist like a trout fisherman.

The Bastakia district on the opposite bank plays house to the textile market and some traditional buildings, complete with new-build wind towers. The founding father Sheikh Zaeed’s old stone house further along the walkway has been enlarged and enhanced, but its austerity speaks of the simple roots of Dubai, when this was the only stone building in a shore scape of barasti grass dwellings and canopies. 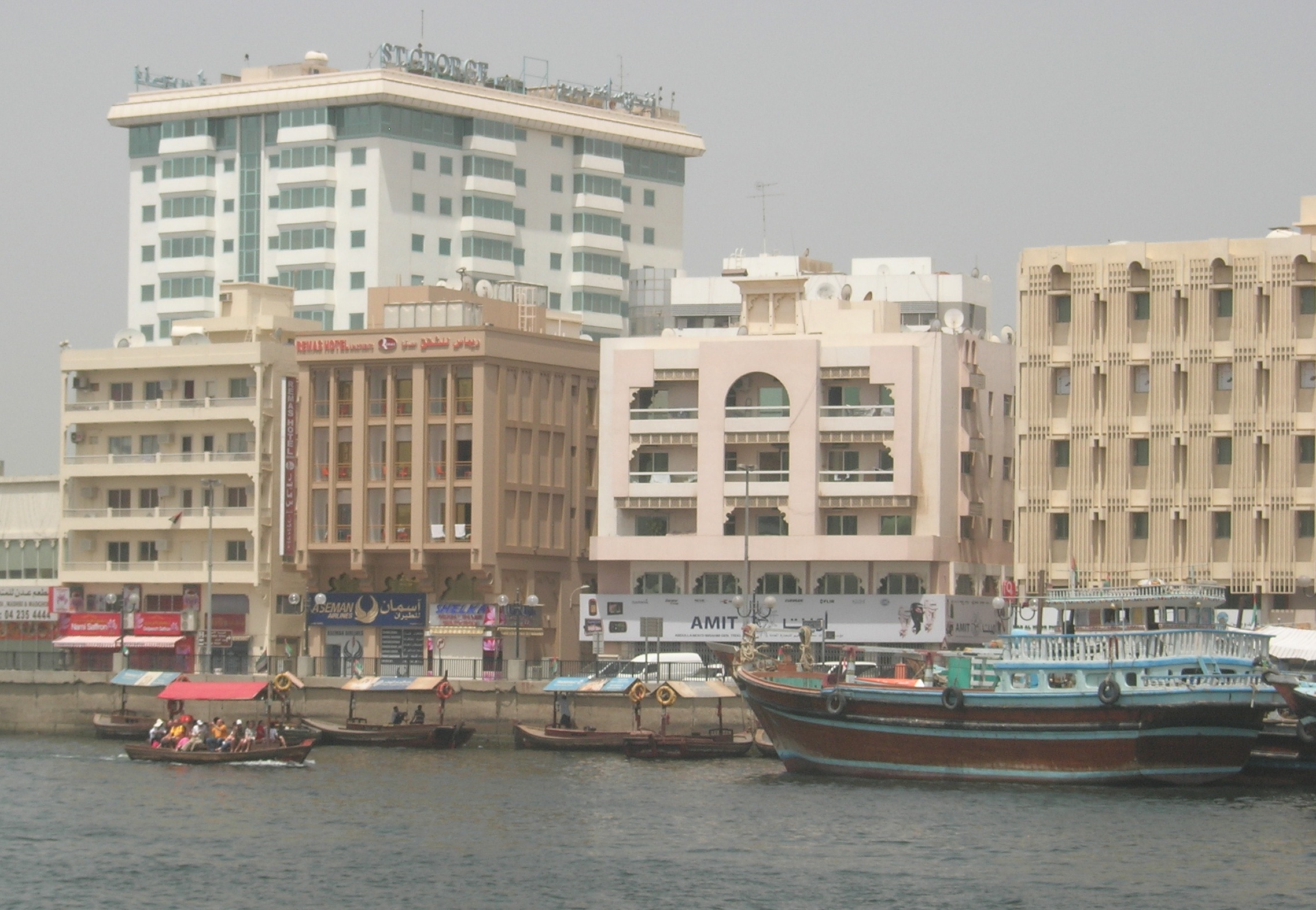 The Creek, with ubiquitous abras and an old trading dhow

On the Deira side the old St George’s Hotel presides over the first bend in the Creek, and the bar keeps ice cold Fosters and Heineken. Just a few doors down is the most enticing of hostelries, the Remas Hotel Apartments. The view from the little balconies is mesmerising, at all times of the day and night. The rooms are musty and roughly furnished, but it is the sensory connection to the working water that makes it a great place to pass a night or two. 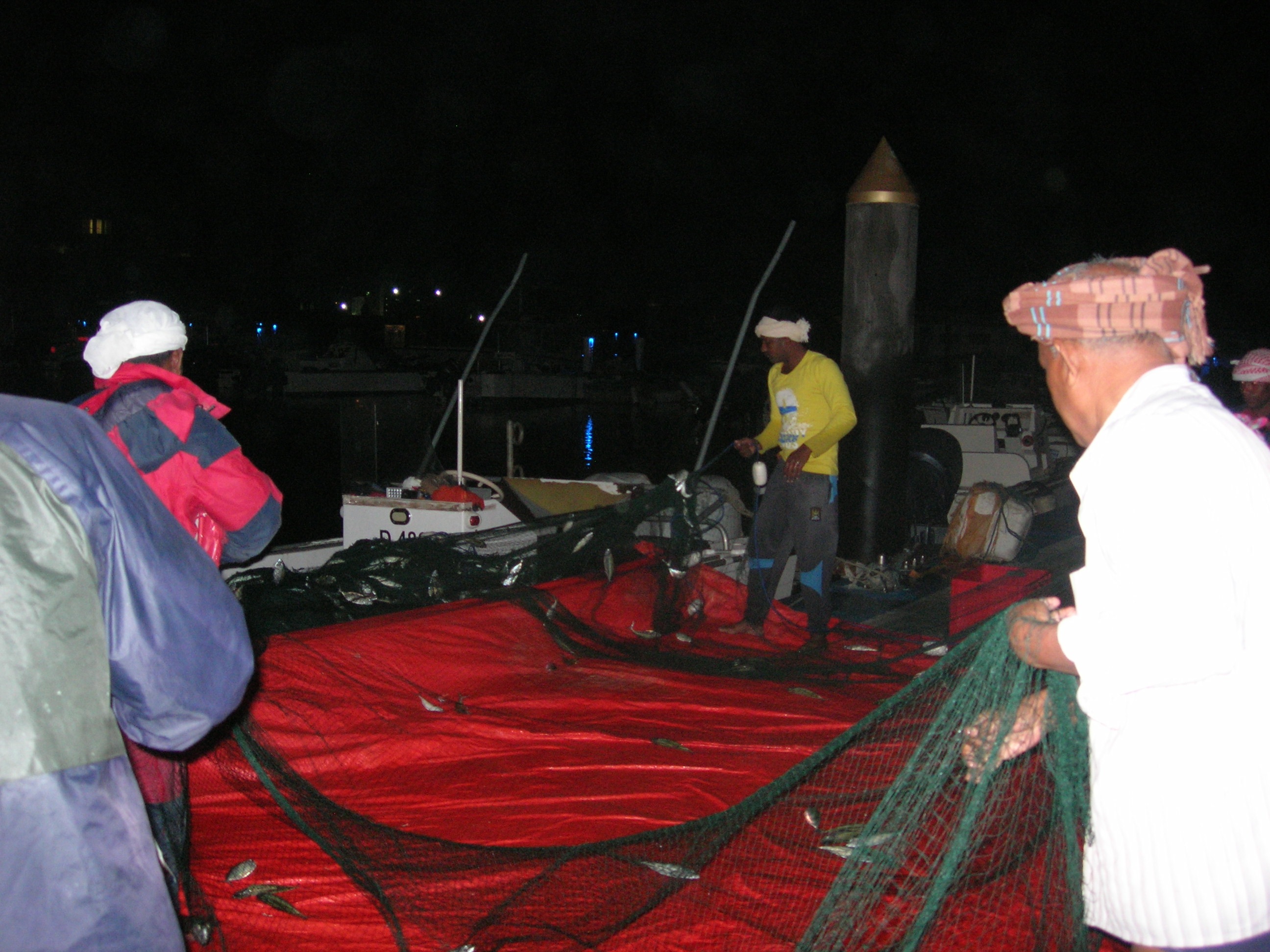 From the muezzin’s first call to the Fajr prayer before dawn to the sounds of the first abras chugging across the gentle waters to the hoot of a departing dhow, it is an aural experience similar to what you can find in a Cairo or a Casablanca or Dijbouti. It is the allure of the Arab world at its most simple and traditional, a world of water and boats and trade.

Further up the coast to the man-made Palm and outrageous 7-star Burj al Arab pleasure palace is another rare find. A working fishing village which comes alive pre-dawn as the small boats return and unload their catch of shiny little fish, destined for the restaurants of the city. The Jumeirah fishing harbour is virtually unknown to most visitors, but it is a rare find for the curious.

Just metres from the mansions of Jumeirah where rich expats play pasha are the neat hostels of South Asian fishermen. There is even a resident cat, who I named Jumeirah Jane, after the hoity housewives of the ’burb. It is a filthy but well-fed and healthy beasticle, pampered by fresh fish daily. She went for a walk with me along one of the pontoons and then just vanished as the sun appeared, like some oriental version of the occidental Cheshire cat. 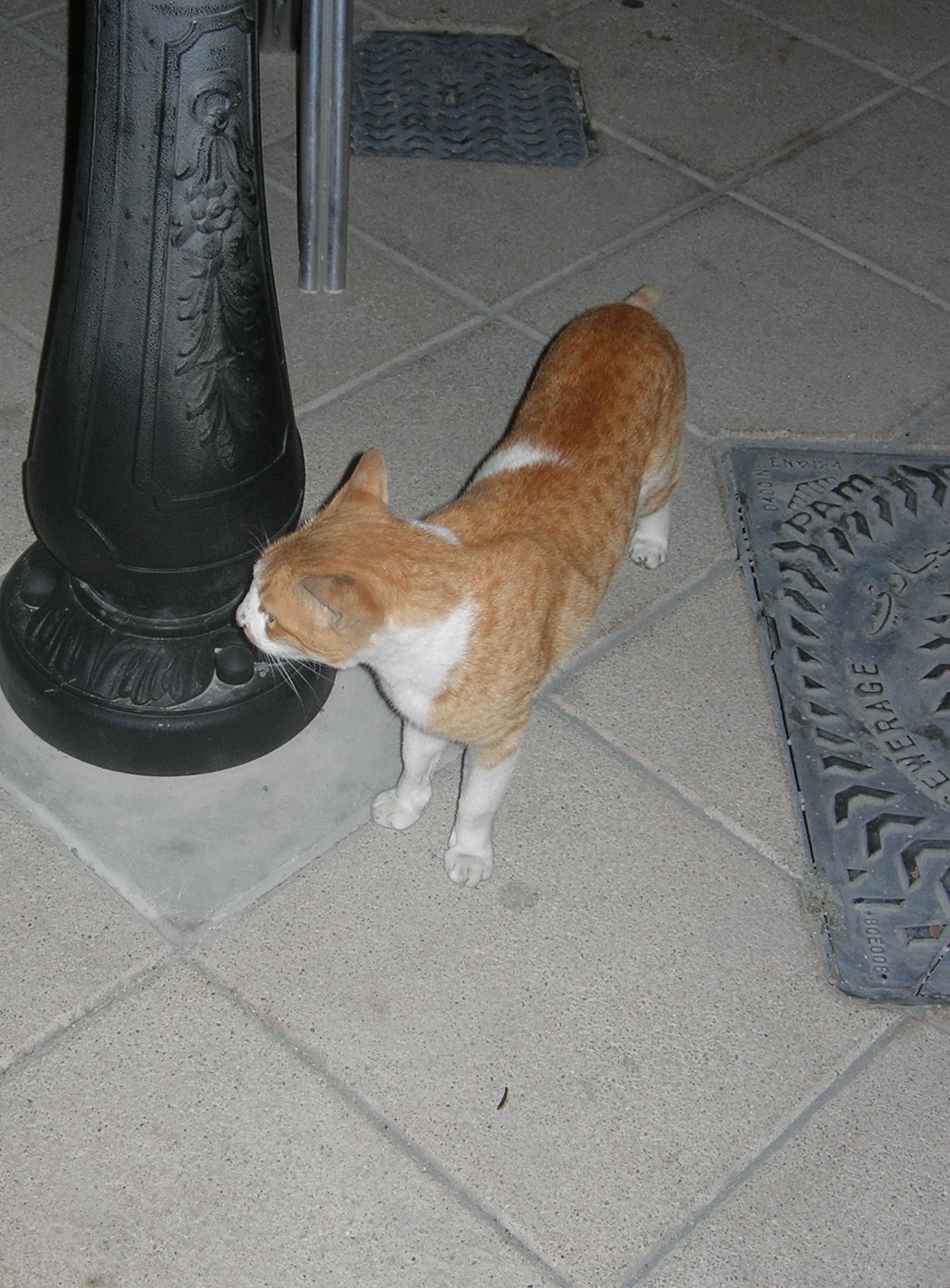 Jumeirah Jane – the Cheshire cat of the gulf

I took an old London colleague from The Times days on a discovery tour of my Dubai recently. He lives in somnolent Abu Dhabi, the UAE capital, and openly said “I hate Dubai”.  But not anymore, I have a convert.

If you want to sample the Creek from a more upmarket vantage than the Remas, the newly renovated Sheraton Dubai Creek Hotel and Towers has a commanding position on the water. Its elegant Vivaldi terrace and restaurant are a perfect refuge where fine Italian food and cool drinks can help you while away some quality hours before the 15-minute drive to the airport.

The slogan for the duty free used to be Fly Buy Dubai. How about this one: Try My Dubai.