Rugby World Cup 2023: Everything You Need to Know About the Biggest Rugby Championship

The countdown to the Rugby World Cup 2023 in France has officially begun, as the tournament is set to kick off in September 2023. This will be the 10th edition of the tournament, which is widely considered to be the premier international competition in rugby union. The Rugby World Cup is an international rugby union tournament contested every four years. The 2023 edition will be the 10th tournament and will be held in France. The tournament will feature 20 teams, and the winner will be crowned the world champion of rugby union.

With 20 teams from around the world set to compete, the tournament promises to be a showcase of the best talent and most exciting matches in the sport. The tournament is organized by World Rugby, the sport’s governing body.

The Rugby World Cup 2023 will take place on 8 September – 28 October 2023. The host nation, France, will be looking to make a strong showing on home soil, while other teams will be vying for the title of world champion.

The opening match is scheduled to take place on Friday, 8 September 2023, at Stade de France, Saint-Denis. The match will feature New Zealand competing against the host team, which will begin at 9 PM local time (GMT+1). 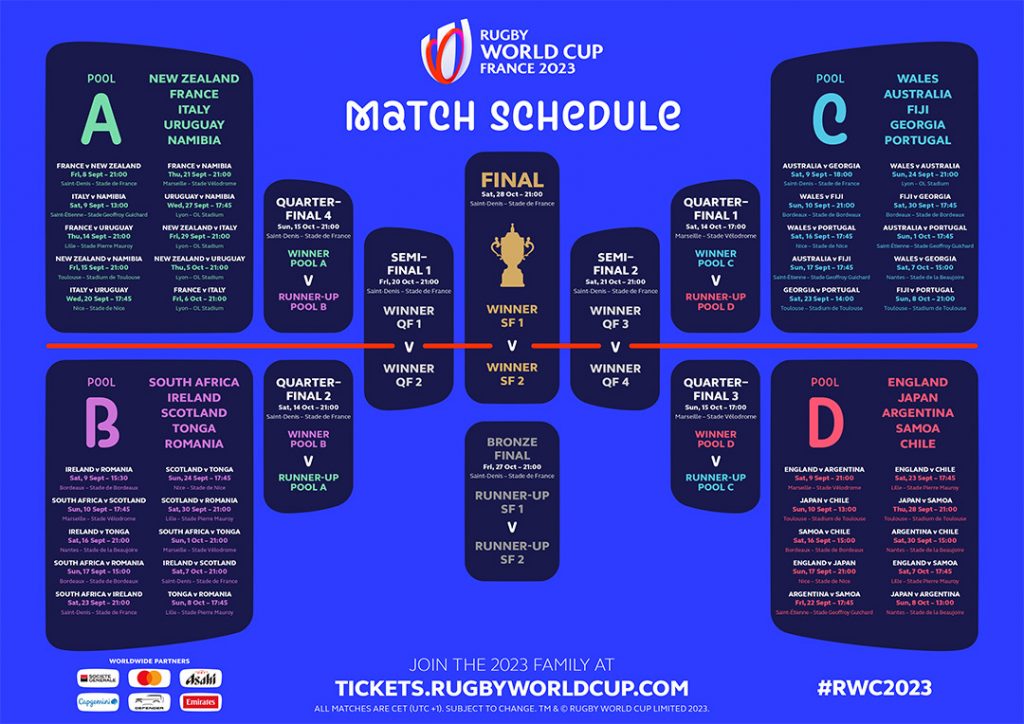 There will be 48 matches played by 20 teams, with 1 – 4 matches played each day. The group stage will end on 8 October, followed by the knockout stage on 14 October until 28 October. Check the complete schedule, fixtures and ticket information on the RWC official website.

There are nine stadiums across France that will be used as venues for the Rugby World Cup 2023 matches. The stadiums are as follows:

Ticket packages to attend the Rugby World Cup 2023 matches in France are now available. Rugby fans should be able to secure their tickets through the official partner website. Ticket prices vary, starting from € 10 up to € 950.

Fans should expect to receive the ticket between 3 – 7 days before the matches begin. Book your tickets before they are sold out.

For fans interested in purchasing official merchandise, they may do so online at the official shop accessible at the following link shop2023.rugbyworldcup.com.