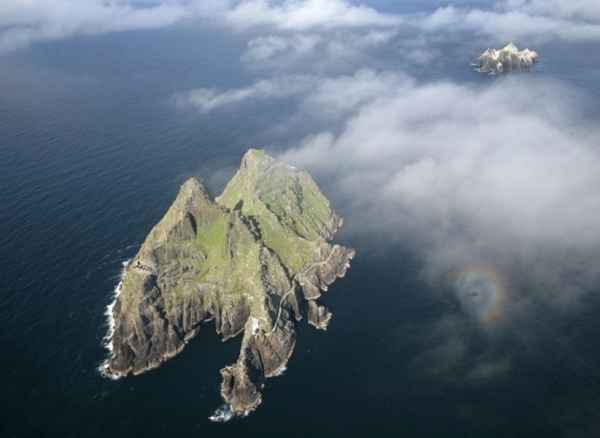 Star Wars puts a tiny Irish island on the map

You may not have heard of this tiny Irish island, yet I’m sure you’ll recognise it if you were one of the gazillion movie-goers who have seen the latest of the Star Wars series; Star Wars: The Force Awakens.

This rugged and incredibly beautiful island is called Skellig Michael, a UNESCO World Heritage Site a small way off the coast of Kerry, which features in a rather dramatic scene in the movie.

Ireland’s Tourism Minister, Paschal Donohoe, is hoping the island’s new notoriety will encourage more visitors to the region, and said that at the end of November, 2015, they had already surpassed the record for the most number of overseas visitors.

The film’s director, J.J. Abrams and crew, were convinced that they had discovered something extremely special the first time they saw the island [see video below].

Historically the island was inhabited by a small group of ascetic monks who withdrew from civilisation to become closer to God around the sixth century, where they established a monastery. They returned to the mainland after two hundred years, yet the island remained a highly spiritual location for visitors, including Nobel Prize winning playwright, George Bernard Shaw, who described it as an ‘incredible, impossible, mad place’ and ‘part of our dream world’.

Skellig Michael will also feature in the next film in the Star Wars series, due for release in 2017.