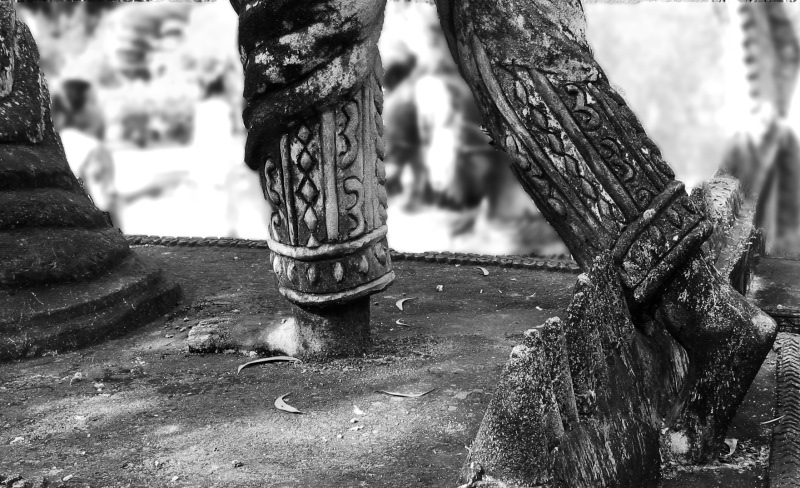 Unusual statues that travel through time and oceans

It’s like a distant echo, a larger than life snapshot of days long past giving you an opportunity to peer into another age. Not all of the world’s sculptures are as smooth and shiny as Michelangelo’s Statue of David. Nor do they all sit in historic museums. Some lay where they were created, among hidden gardens, natural caves, some even submerged beneath the sea.

North of Rome, Italy, lays the town of Bomarzo. In 1552, grief stricken Prince Pier Francesco Orsini commissioned architect Pirro Ligorio to create a garden like no other. After having rather a rough run having been through war, then kidnapped and held prisoner for years only to eventually return home to his wife who then died, the Prince felt a need to express his loss and sadness through this rather shocking array of sculptures.

The park is built into the rock from which emerges monstrous looking carvings such as an elephant crushing an opponent in battle in true Hannibal style,  a half woman, half snake aside two lions and a rather intimidating statue of Neptune holding onto a small dolphin. After entering the giant gaping mouth, named after Orcus, a god of the underworld, you can sip your tea and grab a snack at the picnic table perched on the dark god’s tongue.

The garden has inspired many artists over the centuries, including Jean Cocteau and surrealist emperor Salvador Dali who greatly appreciated its extreme and bizarre existence and appealed to his surrealistic nature. It has served as a backdrop to movies, inspired operas, poets and writers as it seemingly connects the ages with its expression of intense emotion combined with its original portrayal of creatures, gods and humankind aside a quaint village in Italy.

At the other end of the world just off the coast of Cancun, Mexico, you need to don your dive equipment and swim to the depths to experience the eerie underwater world of Museo Subacu¡tico de Arte (Underwater Museum of Art). Jason de Caires Taylor has created a spectacular display of a different kind of art that also serves an eco-purpose. All manner of coral and sea life attach themselves to the sculptures providing a home for marine creatures in an area existing mostly of sand.

Silent Evolution consists of over 400 life size statues placed at a variety of depths and each face tells a different story in what is an incredibly moving presentation only intensified by viewing underneath the ocean. As many have pointed out the sculptures continuously evolve as sea life attach and grow, eventually altering their appearance, even the way they reflect the light.

In the north-east of Thailand, near the Laos border, the Sala Kaew Ku Sculpture Park will mystify and astound you with their size and form. A mix of both Hindu and Buddhist icons, the park was established by Luang Pu Boun Leua Sourirat, a Lao mystic who was outcast and died in 1996, his mummified body lay inside one of the main buildings, enclosed by glass.

It’s said that Luang Pu’s inspiration came from a time when he fell into a hole in the ground as a child, where he met a hermit who regaled him with stories of the underworld and developed his unique sense of shamanism.  Sculptures reflect Hindu narratives on the most part, but a parade of disturbing dogs on motor bikes, standing on steps, all open mouthed with teeth bared, are thrown among the mix.

Luang Pu created something similar on the Lao side of the Mekong, said to be even more extravagant and fantastical but visitors say the most impressive piece in the Thai park is the Wheel of Life; a circular group of sculptures which represent life and death.

The stories behind each piece in all these locations tell stories in the most creative and astounding manner. And when we travel, the beauty and culture of a destination is always appreciated, but oh what we can learn through art and the depiction of life itself through these talented and committed individuals who appear to climb out of any restrictions in time or place and leave their thoughts on earth for all to consider. Whether it’s recent or from centuries past, it’s what travel and the journey is all about.

Fly to Rome and take a tour or hire a car, the drive is a lovely hour north of the city.