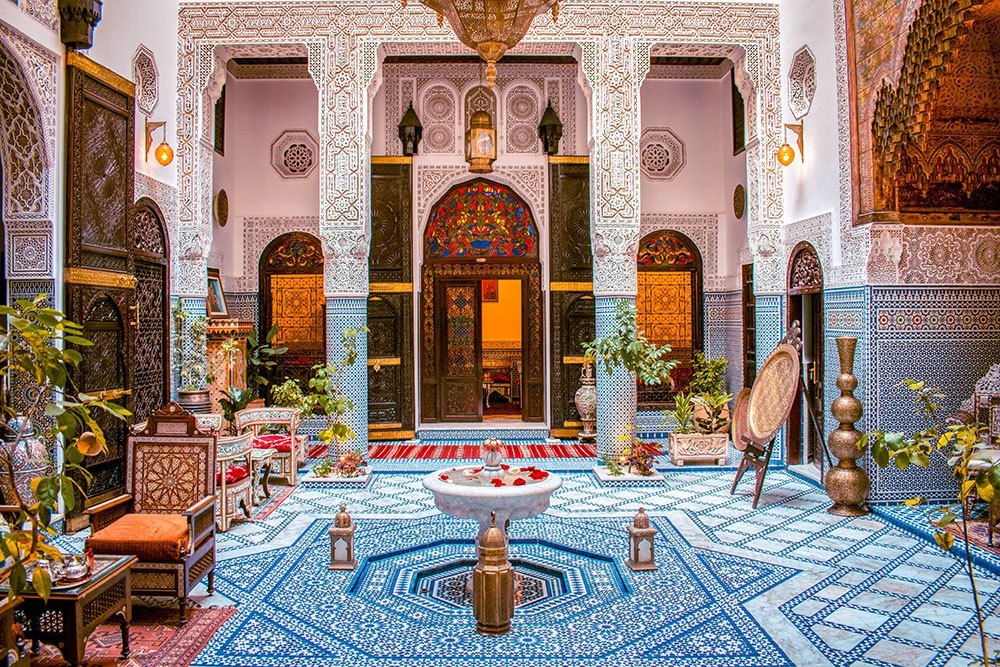 Your Guide to Marrakech Riads: Private Treasures In the Heart of the Medina

In the heart of Marrakech’s landscapes of sepia and dusty red, its Medina is a brilliantly intertwined sprawl of buildings, souks, streets and life. Stall owners haggle with customers, while the smells of coffee blend with the scents of fresh produce, as streams of sunlight haphazardly pierce through awnings and tentages overhead. 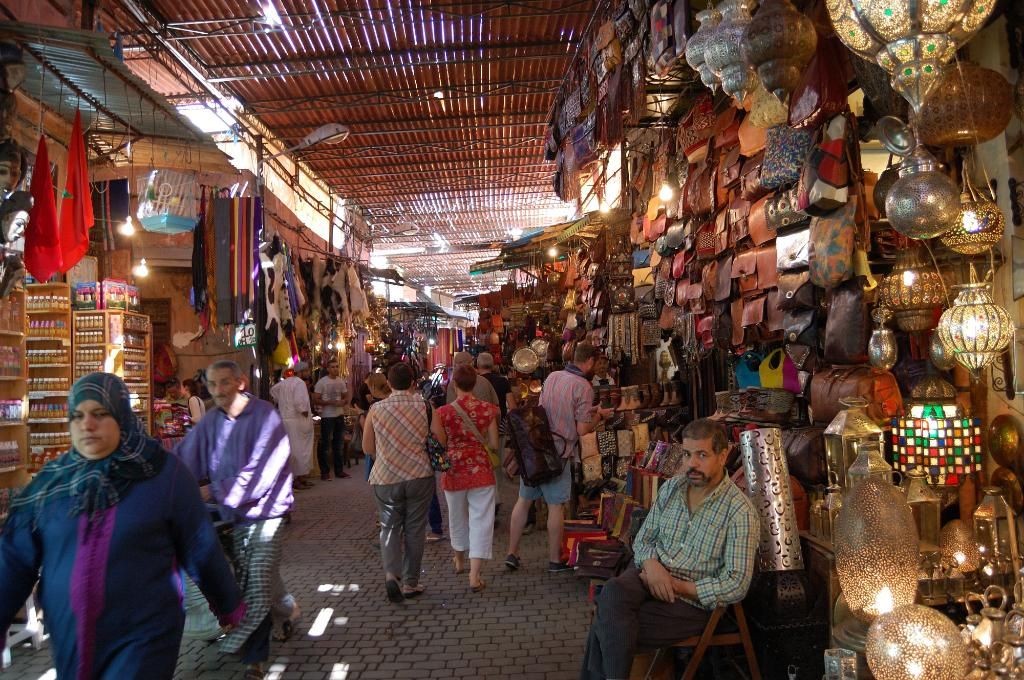 Amid the cacophony, it’s hard to believe that nestled within the Medina’s chaotic labyrinth, are lush pockets of comfort and hospitality, sanctuaries within the bustle. 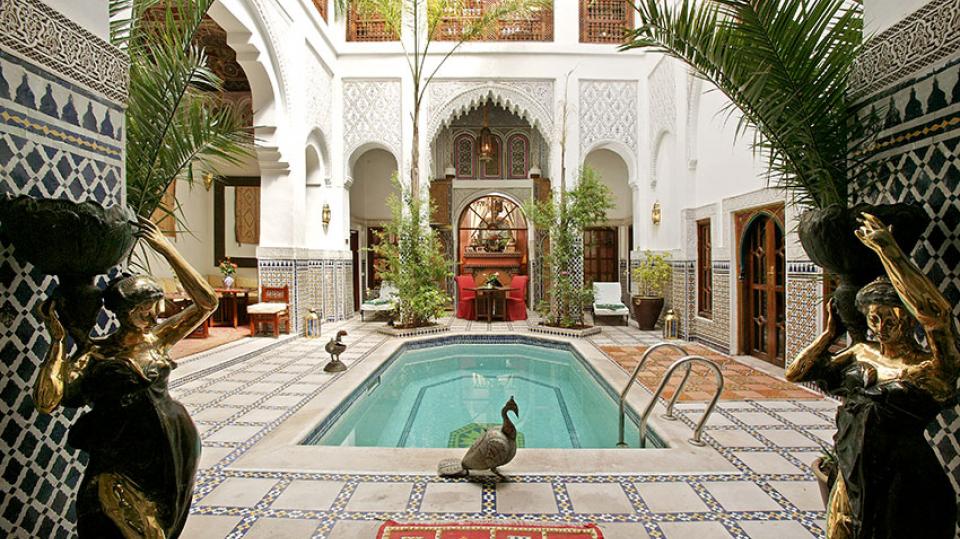 Marrakech’s riads serve a host of functions, whether as a guest house, boutique hotel, or simple bed and breakfast. But you’ll know you’re in a riad the minute you enter one. Because of the nature of the surroundings and Islamic traditions, the riad concept inverts that of a traditional home. Here, the garden is enclosed by the walls, instead of on the outside as is commonly constructed. The result is a truly private garden, only for residents and guests to enjoy.

And what a beautiful sight it is. Don’t be fooled by the weathered and time-worn external facades of riads while walking through the Medina. Riads don’t even have windows on their exterior walls. This keeps dust, heat and prying eyes out of the riad. But also because the buildings are attached, privacy is the priority.

Inside, however, fantasies of Moroccan opulence and timeless comfort are brought to life. The interior architecture and layout of a riad harken back to villas of Roman times, but fashions a distinctive look all its own. Let’s take a tour of the elements that make up these unique pieces of Moroccan living.

The Central Space – A Sanctum of Safety and Peace 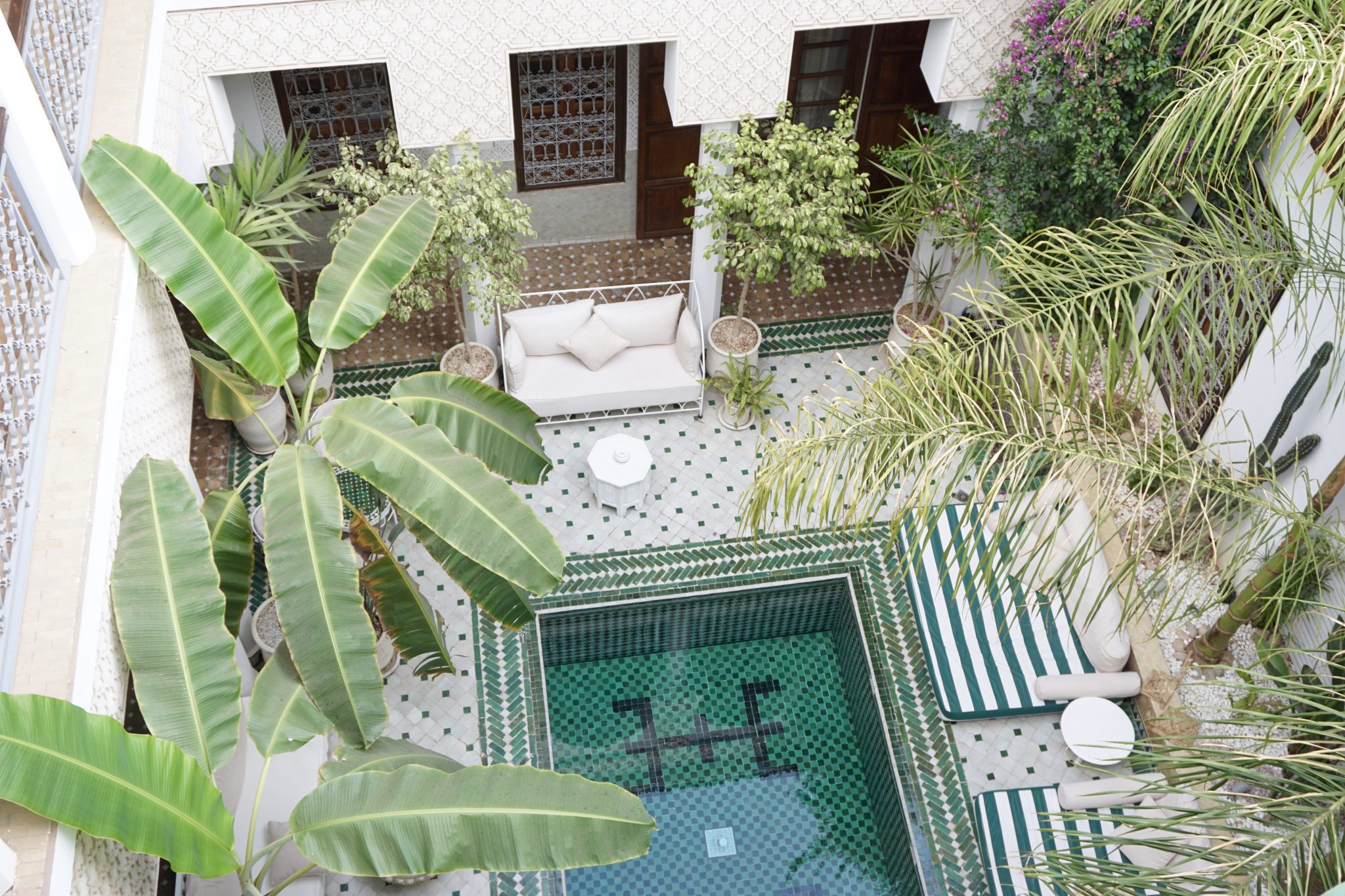 The distinguishing feature of any riad is its central courtyard. Unobstructed by the rooms and passageways around it, the central shaft provides an abundance of light and air, keeping the riad cool even in the middle of the Medina. Originally intended as a garden, some variations of the courtyard today include plunge pools and water features like fountains, adding to the comfort and soothing calm.

While dars utilize the space as courtyard instead of a garden, the principle of suffusing the home with fresh air and natural splendour is similar.

Rooms and Passages of Rest and Perfection 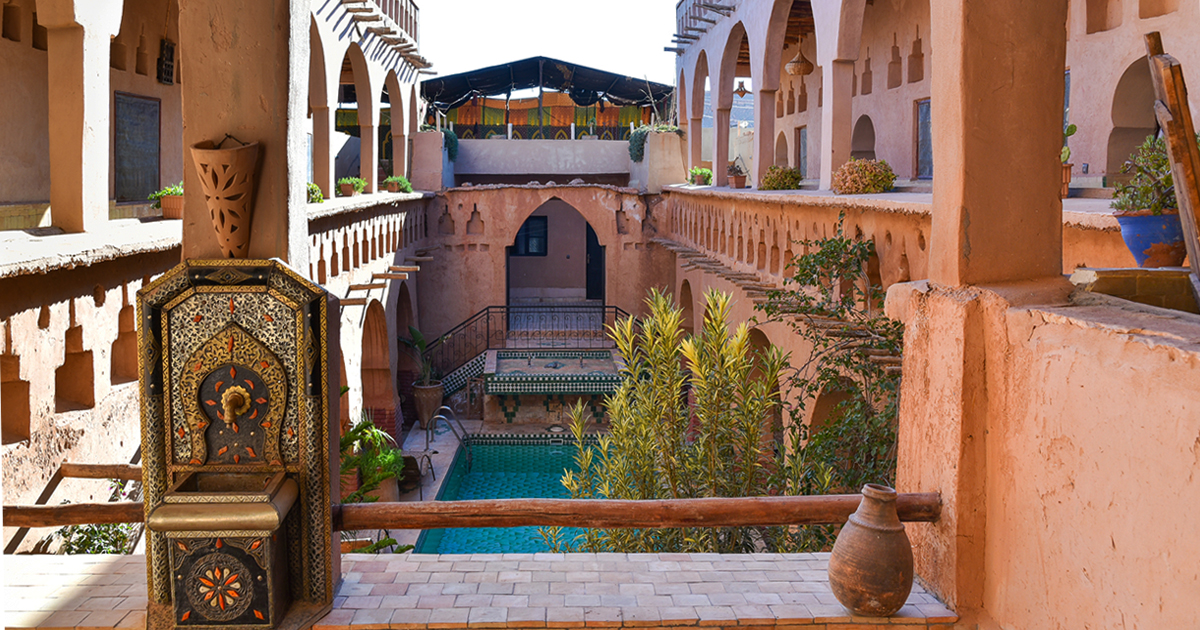 Your typical features of a house, from bâyts (elongated rooms) to corridors and stairs, arrange themselves around this central space, held up by elegant colonnades. High ceilings with sturdy cedarwood beams are a common feature of many riads and provide a lovely contrast to the narrow dimensions of the passages.

Riads typically have fewer than ten rooms, making it far more exclusive than hotels. You’ll feel like a special guest in a home. It’s also likely that a riad’s rooms are all furnished and designed differently. Proving that every riad has its own charms, you’re treated to new visions as you pass through each curved doorway. 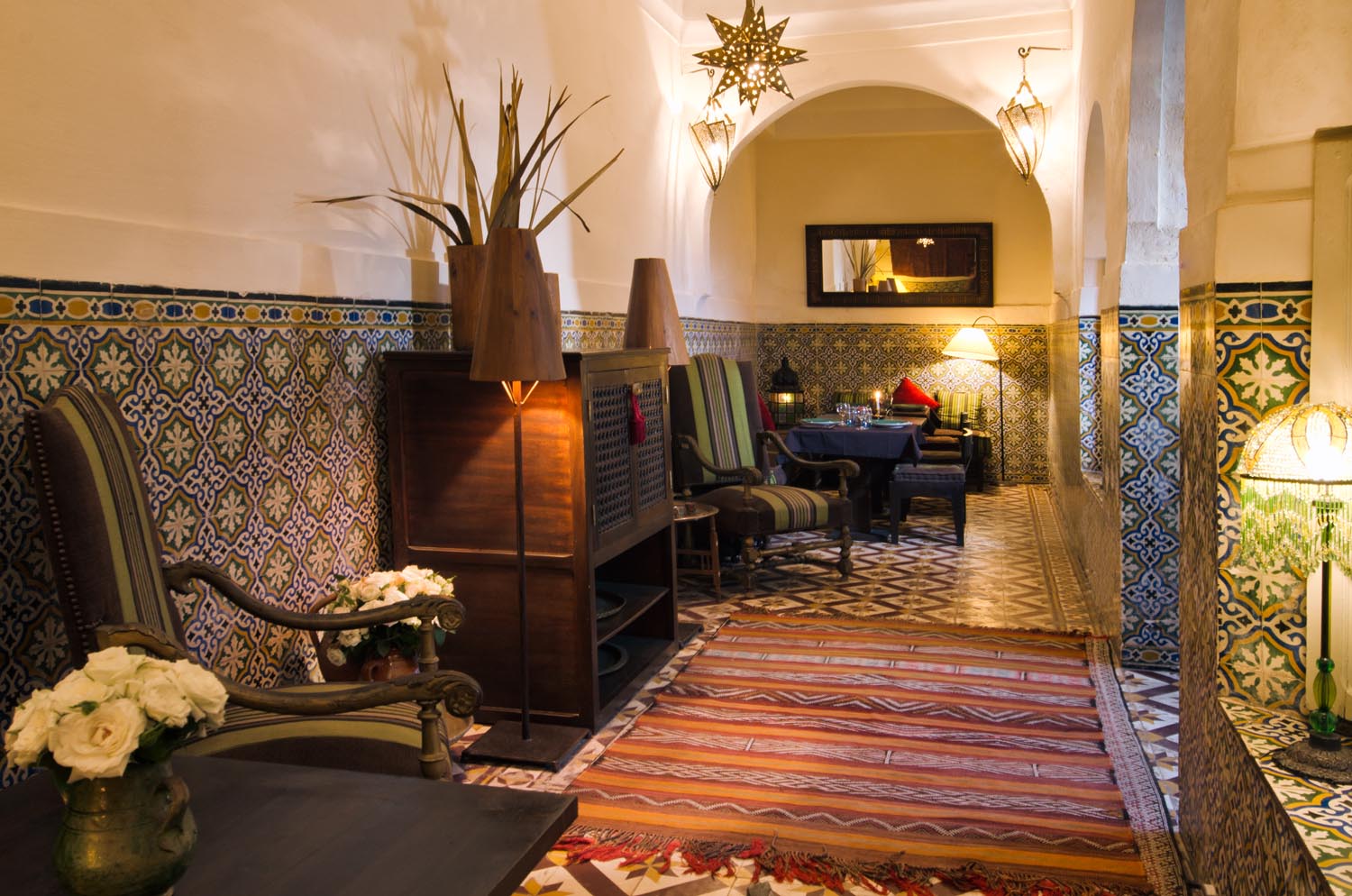 Zellige tiles and mosaics of intricate Moroccan design bathe the room in warm, muted colours, reflecting natural light over exquisite furnishings of local craftsmanship and artistry. Setwans, sitting rooms and suites with snug fireplaces lounge beneath paintings and walls of lavish detailing and design. It is incredible how riads make the most of limited space. 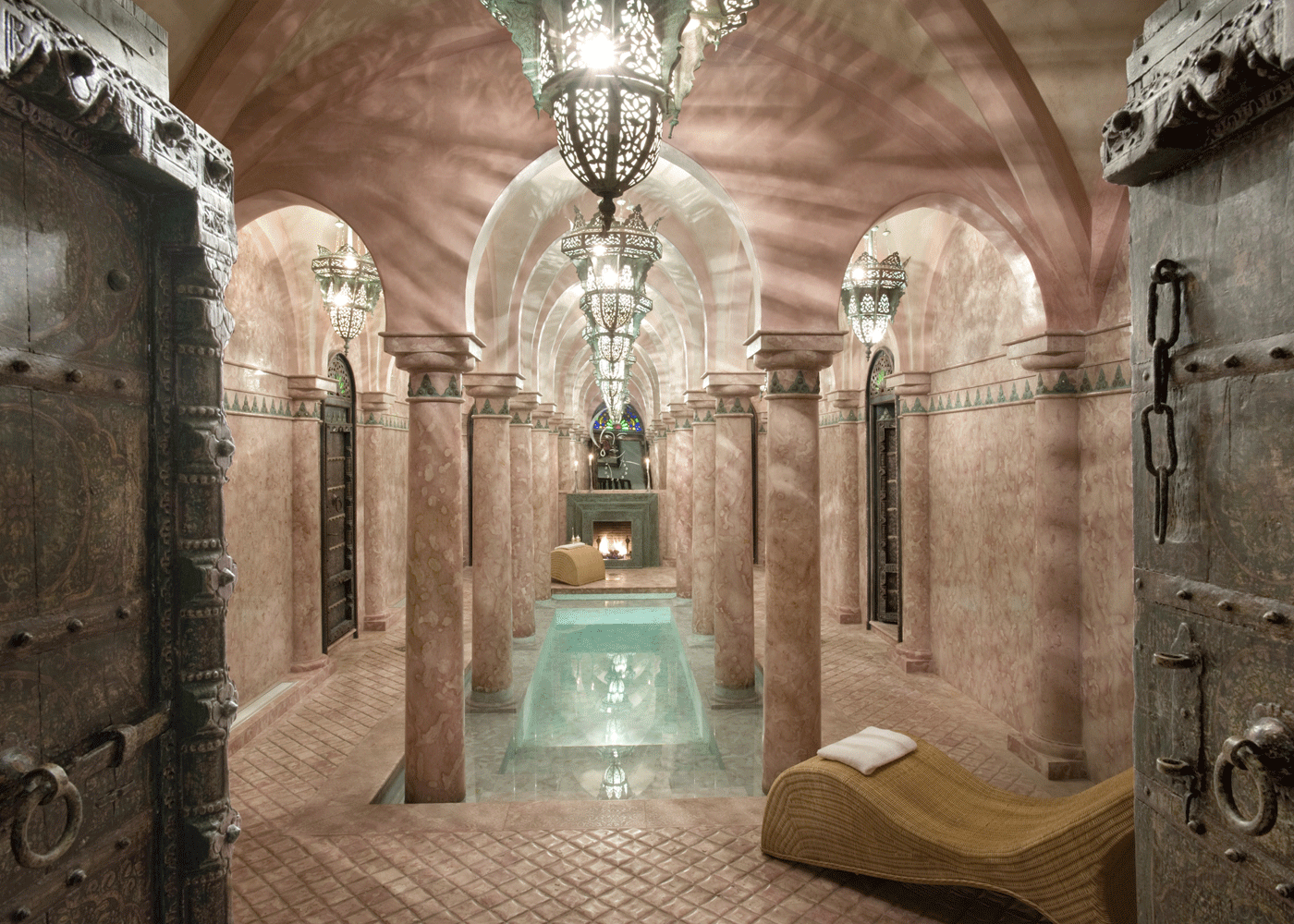 Some even have multiple levels, as entire rooms are separated by height and steps, giving a unique, mazy dimension. At premium riads like La Sultana Marrakech, the meticulous detail and intricacy of its marvellous interiors extends from top to basement and is stunning from every angle. While renovated riads incorporate more modern design and amenities, places like the Riad Granvilier still maintain their original 18th-century designs and surfaces. It makes for a spellbinding trip through time.

Riads can seem like labyrinths within a labyrinth, with narrow corridors making sharp angle turns into rooms and spaces beaming in the illumination of natural light. But step out onto the balconies overlooking the interior garden. As your eyes adjust to the sun, the scene that greets you gets more and more vivid.

Within the central space of Riad Vert, hanging plants cascade down the walls in sheathes of botanic colours, as precious rain is guided along edged roofs to nourish the suspended vegetation. Essential to the riad’s design, windows and doorways open out to the central open-air space. The riad is filled with fresh air breezing through the house, taking away the heat.

…That Open To The Heavens 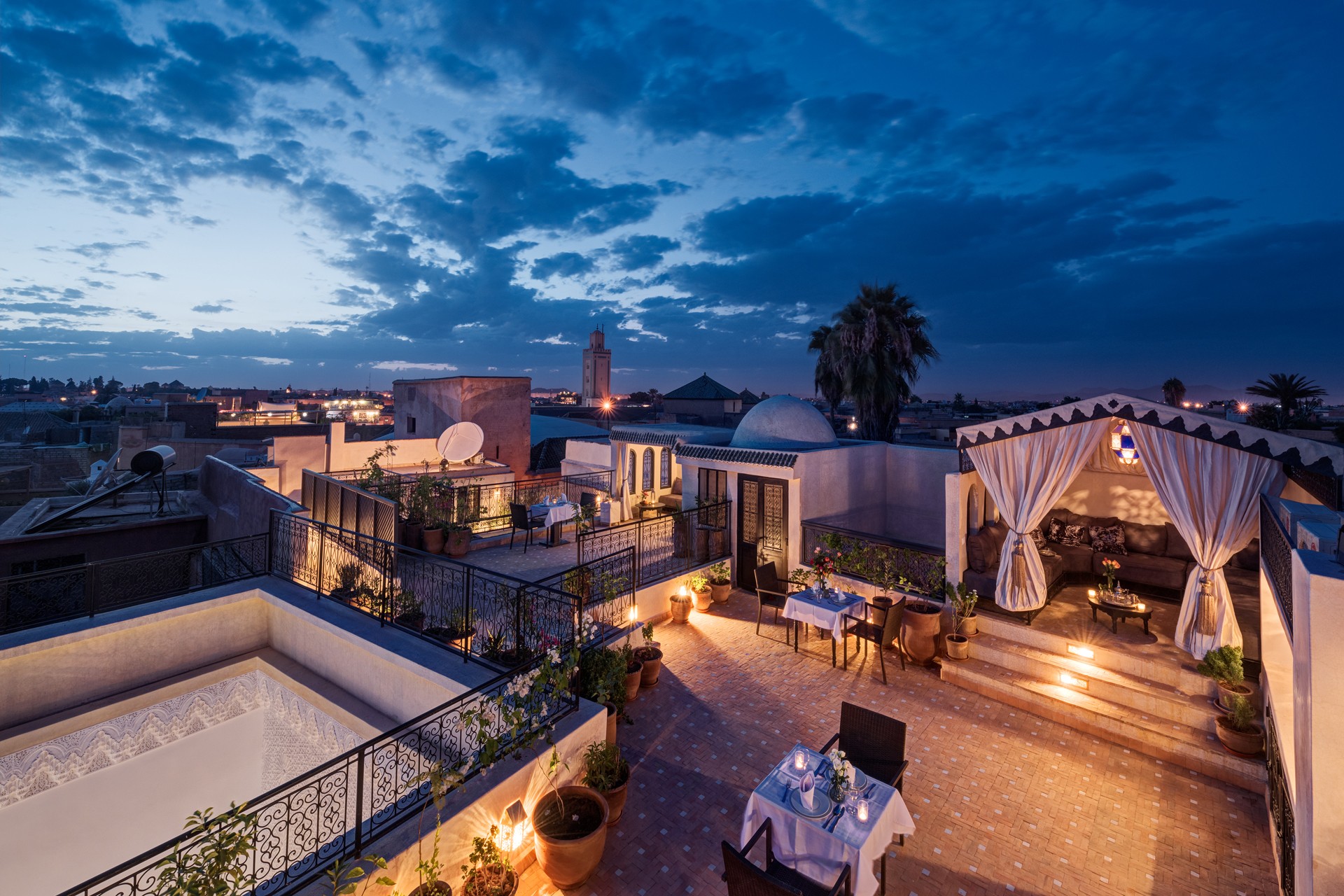 If you need even more space, there’s plenty of room at the top. Most riads, including Riad Boussa, have a roof terrace, inviting you to relax under dramatic expanses of sky. You could also enjoy a rooftop breakfast as the sun rises, for a perfect start to the day.

Hospitality Fit For A Sultan 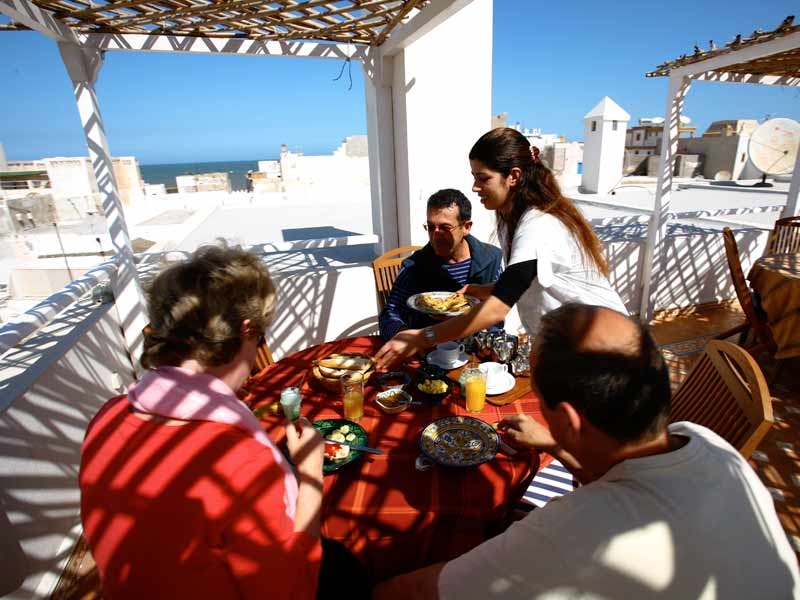 But it’s more than fantastic accommodation that makes the riads so inviting. You also get treatment and hospitality like sultans of old, as most riads provide in-house services who’ll happily cater to your needs. Several riads also feature in-house chefs who cook to order using fresh produce straight from the market, rather than have a restaurant. Some also have wellness features, like Dar Doukkala Riad & Spa, which includes hammam and massage sessions in its packages. 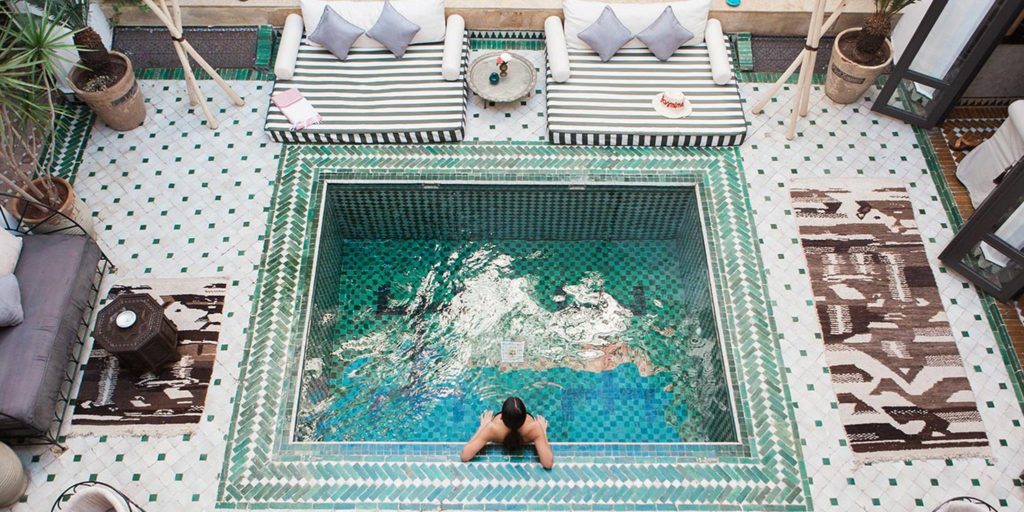 As veritable retreats from the noise and activity of the souks outside, riads are luxurious capsules where you can escape into peace and comfort. You can see why many are choosing to spend their nights in a riad instead of a more conventional hotel. Riad residences provide an authentic glimpse into historic Moroccan living and are certainly unlike any other. And, when you’re ready for excitement, step through the doors and right back into the bustle.

Check out the Wego Travel App to find plenty of great options for a riad experience that will suit your preferences!