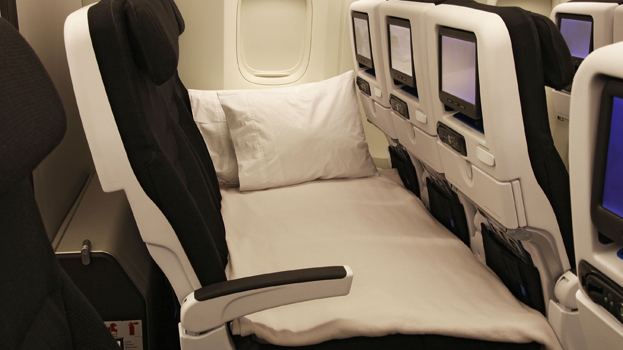 Wouldn’t it be marvellous if you could book a row of three seats in Economy Class and convert them into a single short flat bed?  We certainly think so and it appears so do Air New Zealand.

Air New Zealand, who just received the Best International Airline of the Year (January 2012) accolade in the Roy Morgan Customer Satisfaction Awards, have created the “skycouch”.  The skycouch has armrests that recess and padded footrests that lock horizontally resulting in what’s been described as a ‘flying futon in cuddle class’ for their new 777-300 planes, flying daily between Auckland, Los Angeles and London.

If you’re on the tall side and your feet hang out into the aisle beyond the 1.55m length of the skycouch, you will have to find some sort of alternative position alongside your fellow passengers. We should point out that only two adults fit comfortably across the three seats, but you can purchase the vacant third seat at around half price if you wish.

If you’re travelling with one or two small children you can also make use of the skycouch as a cosy play/sleep area.

It’s a great concept and we’re happy that airlines are beginning to consider ideas for some kind of comfort on those long haul flights for us weary travellers. It certainly beats attempting to sleep in an upright position for all those hours. After all, let’s face it the only time your seat should be upright is when you’re preparing to land.