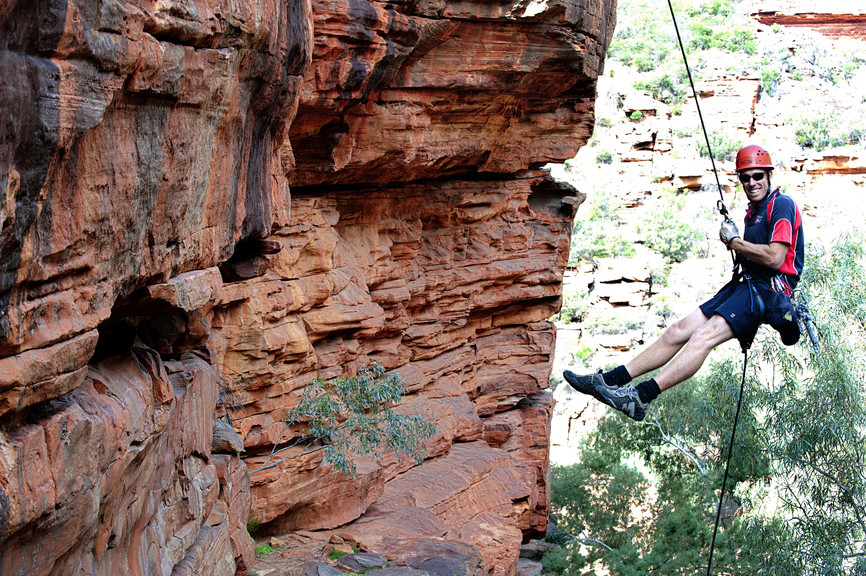 A-Z of adrenalin and thrills in Australia

Bungy Jumping
The Cairns Bungy Tower is the place to bungy jump in Australia. Run by bungy pioneers AJ Hackett, it offers a number of different jumps, from the traditional dive through to extreme BMX bike jumps.

Canyoning and Caving
Some of the best deep caves and canyons are to be found in the Greater Blue Mountains in New South Wales; Tasmania’s Cradle Mountain-Lake St Clair National Park; Mt Buffalo and the Buchan Caves in Victoria; and Karajini National Park in Western Australia.

Diving with sharks and crocodiles
At Port Lincoln in South Australia you can be lowered into the water with Great White Sharks. A gentler experience is diving or swimming with whale sharks on Western Australia’s Ningaloo Reef. At Sydney’s Manly Oceanworld you can dive in a tank with grey nurse and wobbegong sharks, moray eels, stingrays and sea turtles. Plunge into the water with a giant crocodile in the Cage of Death at Darwin’s Crocosaurus Cove.

Flyboarding
Flyboarding, a combination of a jet ski and jet pack, first came to Australia in 2012. The flyboard is attached to a jet ski by a Kevlar hose that pumps water to keep it as high as 10 metres in the air, enabling riders to dive, dolphin-like, under water from a great height. Aquavue Watersports Cafe at Hervey Bay will be one of the first places in Australia to hire out flyboards. Watch this space for more centres opening soon.

Helicopter tours and scenic flights are a great way to gain a perspective on Australia’s vast landscapes. Experience the adrenalin rush of an aerobatics flight in a classic Tiger Moth airplane or try your hand at flying a jumbo jet at the Jet Flight Simulator in Perth.

Hang gliding
It was in Australia that the first modern hang gliding wings were designed and flown. There are many hang-gliding centres around Australia and soaring opportunities all year round for experts and beginners.  Byron Bay; Stanwell Park near the Royal National Park in Sydney; Bright, Mount Beauty and Torquay in Victoria; and Port Douglas, Cairns and Noosa in Queensland are popular hang gliding centres.

Indigenous treks
Follow an Aboriginal guide and learn about the legends of the traditional owners of the land on walks lasting from one day to several weeks. Indigenous treks in the Greater Blue Mountains; Nitmiluk National Park in the Northern Territory; and Lake Mungo in New South Wales will all show you our ancient land from a new perspective.

Jet Skiing and Jet Boating
There are many places to experience the thrill of jet boating including Sydney Harbour; Coffs Harbour; the Gold Coast, Tasmania’s Derwent River and the Murray River. Take a Jet Ski eco-safari through the glorious Whitsundays in North Queensland.

Kayaking and canoeing
You can sea kayak off St Kilda Beach in Melbourne or under Sydney’s Harbour Bridge; or paddle on Canberra’s Lake Burley Griffin. For kayaking in the wilderness try the Blackwood and Frankland Rivers in Western Australia; South Australia’s Coorong River; the Northern Territory’s Katherine Gorge; Tasmania’s Gordon River; or the secluded beaches of Freycinet National Park. Sea kayak over tropical fish and coral on Western Australia’s Ningaloo Reef or Queensland’s Great Barrier Reef.

National Parks
Australia has more than 500 national parks and over 28 million hectares of land designated as national parkland, so there’s no shortage of places to escape to nature. Australia’s parks and reserves provide an ideal setting for any outdoor pursuit, from adventure activities, to bird-watching and bushwalking.

Observe the universe
Australia’s clear skies and wide open spaces are perfect for stargazing and astronomy. There are observatories and planetariums in most Australian capital cities. The Honeysuckle Creek Tracking Station and Tidbinbilla Deep Space Communication Complex just outside Canberra in the Australian Capital Territory form a vital part of NASA’s tracking network and were the first to receive messages from the historic Apollo moon space mission.

Road tripping
Australia is the place for epic road trips and four wheel driving. The Outback Way runs 2750 kilometres from Waverton in Western Australia to Winton, Queensland via Alice Springs, Uluru and Kata Tjuta. The Explorers Way runs from Adelaide to Darwin via Australia’s Red Centre. Travel the Great Ocean Road and check out the giant surf swells along the way. The 3,500 kilometre Savannah Way from Cairns to Broome is one of the world’s great transcontinental road trips. On South Australia’s Kangaroo Island you might not see anyone else on the road.

Scuba diving
Scuba diving in Australia is world-class and a great place to learn. The islands of the Great Barrier Reef naturally offer spectacular diving. Dive Western Australia’s Ningaloo Reef just by stepping off the beach. Exmouth’s Navy Pier is considered one of the world’s top ten dive sites. Explore Victoria’s Shipwreck Coast or the more than 200 along the South Australian coast. For something different, dive in Tasmania’s Fortescue Bay’s giant kelp forests amongst weedy sea dragons.

Tobogganing and Skiing
It’s hard to believe that you can ski in Australia, but the high country of Victoria and New South Wales is where Australians go for snow. Falls Creek, Mount Buller and Mount Hotham in Victoria have challenging runs. The Snowy Mountains of New South Wales are home to the Thredbo, Perisher and Charlotte Pass resorts just a few hours from Canberra in the Kosciusko National Park.

Underground
The outback town of Coober Pedy in South Australia is the opal capital of the world and is also famous for its underground home and hotels. Play golf at night with glowing golf balls on a desert course.

Volunteering
You can join important environmental and wildlifeconservation projects and help preserve Australia’s natural environment. Join a range of projects from turtle conservation in Western Australia to monitoring Hairy-nosed Wombats in South Australia.

Yachting
The Whitsundays are renowned for their sailing; while the Sydney to Hobart Yacht Race is world famous. You can sail a Tall Ship on Sydney Harbour or in Fremantle Western Australia.  For extreme sailing adventure Tasmania’s Three Peaks Race in April each year sees teams sail from north of Launceston to Hobart, pausing to scale three mountains along the way. The Darwin Sailing Club is a good place to meet local yachties.

Zip lining
Go jungle surfing through the trees on the zip line canopy tour at Currumbin Wildlife Sanctuary in Queensland; the Otway Fly in Victoria; the Tasmanian wilderness and Queensland’s Cape Tribulation.