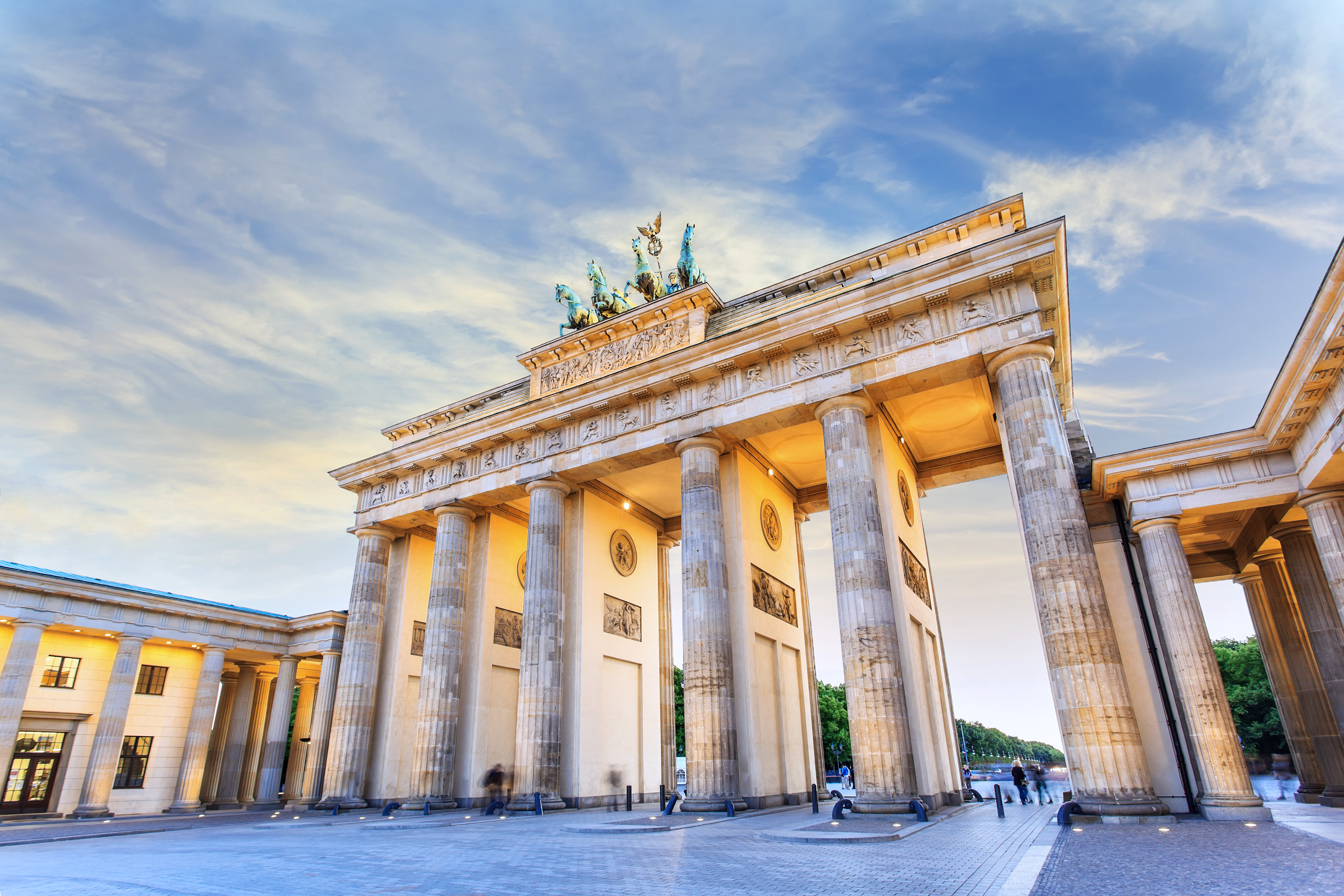 Fall in Love With These 5 German Cities

From the artistic buzz of Berlin to the home of Bavarian kings in Munich, here are five cities in Germany that are a must to visit.

Hamburg oozes charm. It’s one of Germany’s most greenest cities with beautiful parks and pretty, tree-lined streets. Located on the banks of the Elbe River, Hamburg is the largest port city in Germany, and one of the biggest in Europe. Much of the city’s life and history is centred on its harbour and maritime history and it’s a great place to begin your explorations and really get a glimpse of the essence of Hamburg.

Hit the fish markets in Altona on Sunday and experience the buzz as restaurateurs and shoppers grab today’s freshest catch in the beautiful century old auction hall. Watching all the action of giant container vessels, massive cruise ships and luxury yachts float on by as you take in the salty air is mesmerising.

Join in and take a sightseeing boat which you can take from the Landungsbrücken jetties and see the huge variety boats, and the port area, from the water. Then take a stroll through the old town and see where seafaring folk traded their spices from faraway lands in ages past. 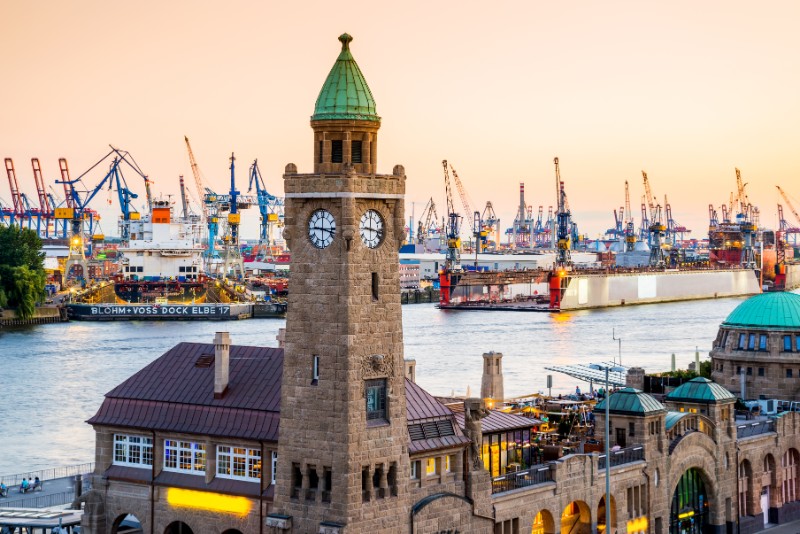 Perlenkette which sits directly on the river offers fine dining in its many restaurants adjacent to a number of riverside luxury residences. From the Magellan Terraces you can get one of the best views of the city’s newest landmark – the Elbe Philharmonic Hall. Selfie alert!

Rising up from the river to a height of 40 metres, the visionary and futuristic of the Dockland office building offers incredible views of the city surrounds from its public rooftop viewing platform.

The arts are an important feature of Hamburg – embedded into the city’s heart and soul. With more than 20 theatres throughout, there’s no reason not to catch a live performance while you’re there.

Blockbuster musicals are a specialty of the city and the city is considered on par London and New York shows. Three big musical theatres perform big hits such as The Lion King, Mamma Mia and more, and a number of smaller venues perform local showpieces in charming theatres such as St Pauli. 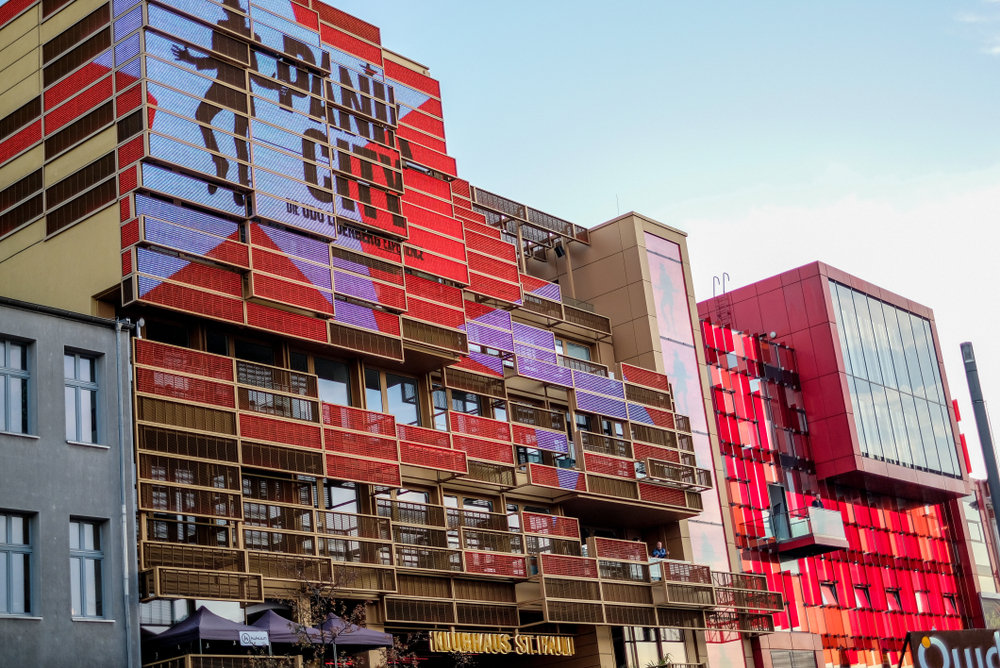 Car loves will get revved up with a visit to the Prototype Museum featuring over 40 extremely rare and classic sports cars. Continue on to the Miniature Wonderland and marvel at the detail and intricacies of the world’s largest model train, and recreations of Switzerland, America, Scandinavia and more.

Take a walk through Alter Elbpark; a four hectare ‘green island’ where Hamburg’s first International Garden Show as held back in 1869. The historic gardens feature a giant statue of Otto von Bismarck, who gazes seaward and can be seen from a number of locations in the city.

In 1930 the leafy beauty of Planten un Blomen Park opened, free to the public where the city’s residents spent time relaxing on the soft, smooth lawns, listening to the soothing jets of fountains or wandering through the carefully cared for array of flowers. The nearby Hagenbeck Zoo was groundbreaking in the world of zoology, removing cages enclosures for a far more natural animal experience.

Stepping off the plane into Europe’s only five star airport sets the scene of your visit to Munich. At its centre, Marienplatz Square gives you an insight into the beautiful heritage this city is so proud of. It’s a mix of old and new which is represented so well in the buzzing Square with the Old and New Town Halls, with its iconic glockenspiel.

Browse the Viktualienmarkt and enjoy the mouthwatering Bavarian delicacies and pick up some souvenirs. Then check out the luxury shopping boulevards of Ludwigstrasse, Maximilianstrasse and Kaufinger Strasse for designer fashion and classic antiques. 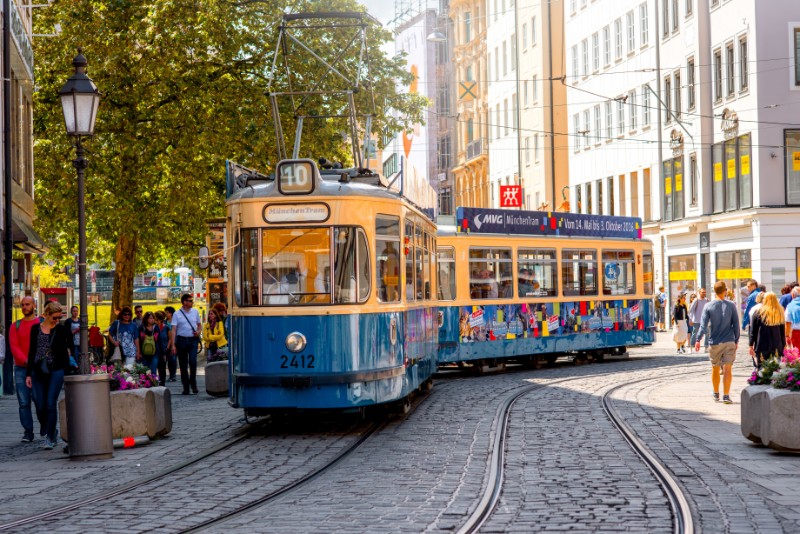 Museums are aplenty in Munich and feature the old and the new. Check out the world’s biggest science and technology museum at the Deutsches Museum, along with the Alte Pinakothek, the Neue Pinakothek and the Lenbachhaus Museum.

The modern art collection (from 1945) is incredible at the Brandhorst Museum, with great exhibits also at the Glyptothek Museum and the State Collections of Antiques.

Munich’s Art Quarter is filled with chic cafes and tiny boutiques that are well worth exploring.

The BMW Museum displays Germany’s fine automotive history, and if you love football don’t miss the opportunity to see the local Bayern Munich team play on their home turf at the Allianz Arena.

Car lovers will adore Stuttgart. The Mercedes-Benz and Porsche Museums are tributes to both car classic’s heritage and very much at the heart of this beautiful city. 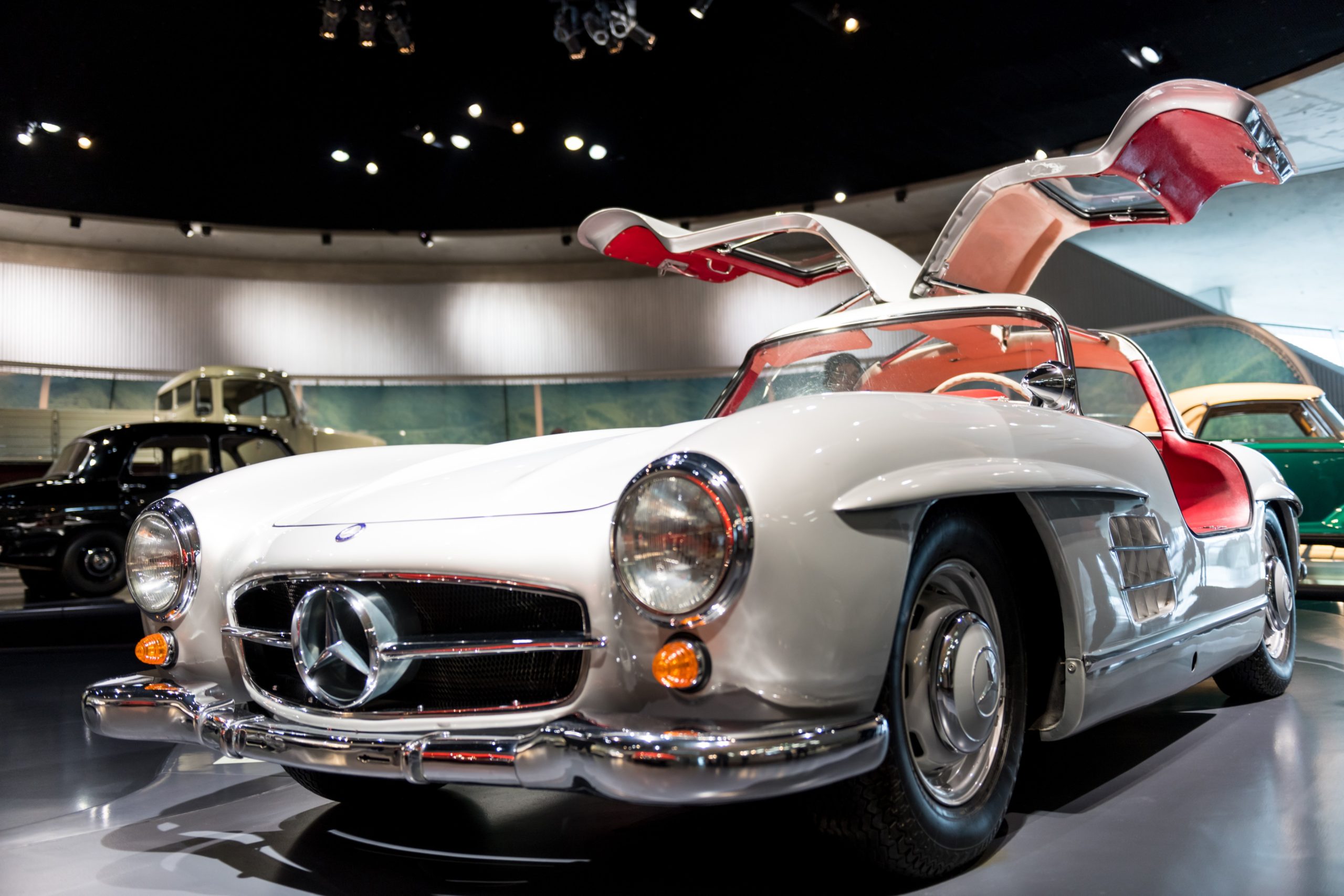 The Mercedes-Benz Museum walks you through the history of the automotive giant with over 1,500 exhibits over nine floors. The all white Porsche Museum is an architectural wonder in itself and takes you through a number of interactive exhibits. Both are a tribute to German engineering and design excellence.

For some epicurean excellence head to Stuttgart’s Market Halls built in 1914 and regarded as one of the best examples of the city’s art nouveau period. Covering 3,000 square metres you can spend a delicious few hours exploring local baked goods, delicatessen cheeses and meats and more.

In the city centre, the Schlossplatz Square is dominated by the stunning Neues Schloss (New Palace). Check out the contemporary art collection at the Stuttgart Art Museum or go back in time at the Altes Schloss.

Stuttgart loves the performing arts – catch a ballet, the state opera or one of many theatrical productions at the State Theatre, or tap your toes in one of many jazz clubs in the SI-Centrum entertainment complex.

On the banks of the famed River Rhine, Düsseldorf is Germany’s capital of fashion and design. International fashion designers flock to a number of events to view the latest in couture and design each year. Needless to say some of the world’s biggest brands are represented in the city along with unique local emerging talent. 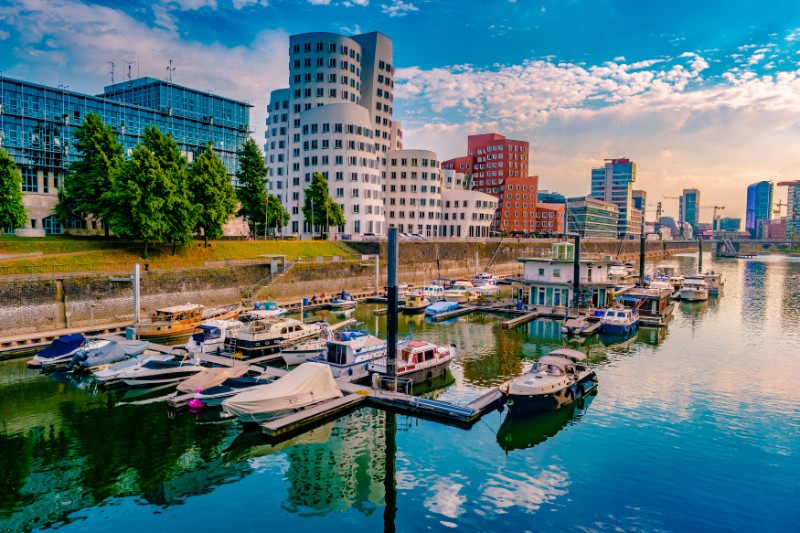 See what’s hot this season on Königsallee where the chic and beautiful peruse new arrivals and classic style. For antique and art lovers stroll Schadowstrasse or Carlstadt and head to the old town for some buzzing restaurants to refuel.

You’ll be in retail heaven in Düsseldorf, and after you’ve shopped visit Europe’s third-largest Japanese community at the Japanese Quarter. With the Hotel Nikko on Immermannstrasse at its centre, explore fine Japanese restaurants, bookshops and more.

Unwind in the city’s charming square at the Burgplatz and drink amazing coffee while watching boats on the Rhine float past.

The German capital is one of the country’s most vibrant. With a deep-rooted love of art and culture, Berlin buzzes with a unique urban style that also comes through in its famed music scene.

History has left its mark too in the city with a number of well known landmarks that are a must to visit. The Brandenburg Gate, symbolising the unity of the country, the remains of the Berlin Wall where now an art museum and the nearby East Side Gallery – a 1316-metre long piece of the Wall – is one of the world’s largest open air exhibitions. 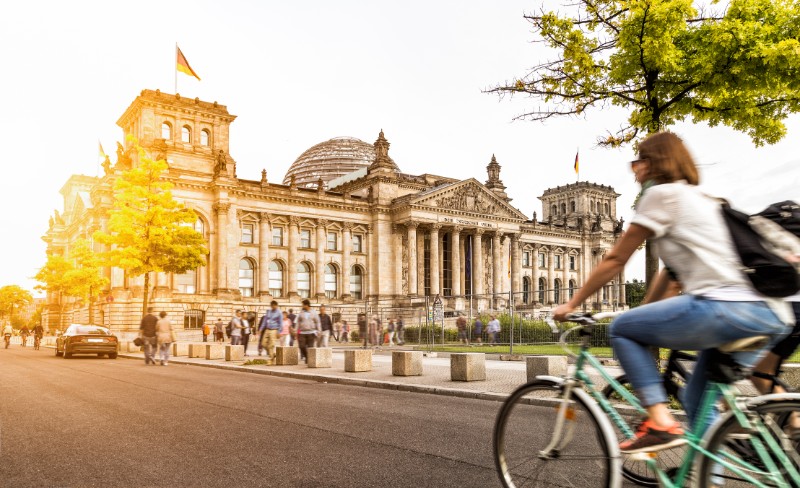 With over 170 museums you can spend hours perusing history in all its forms. Leading orchestras, and the acclaimed Berlin Philharmonic orchestra, ballets and operas, all perform in one of three of the city’s main opera houses.

Shop in fabulous Kurfürstendamm or Friedrichstrasse, and dozens of specialist boutiques, shops and malls.

The relaxed, laid back vibe of the city is contagious and nowhere more apparent than in one of its many parks. Stroll the World Gardens in Erholungspark Marzahn with large lakes and romantic bridges to sit by.

Have some fun at the interactive Exploratorium Potsdam museum in Babelsberg, and take the kids to Legoland Discovery Square.

So find the best flights on Wego and journey through some of Germany’s best cities to suit every traveller.