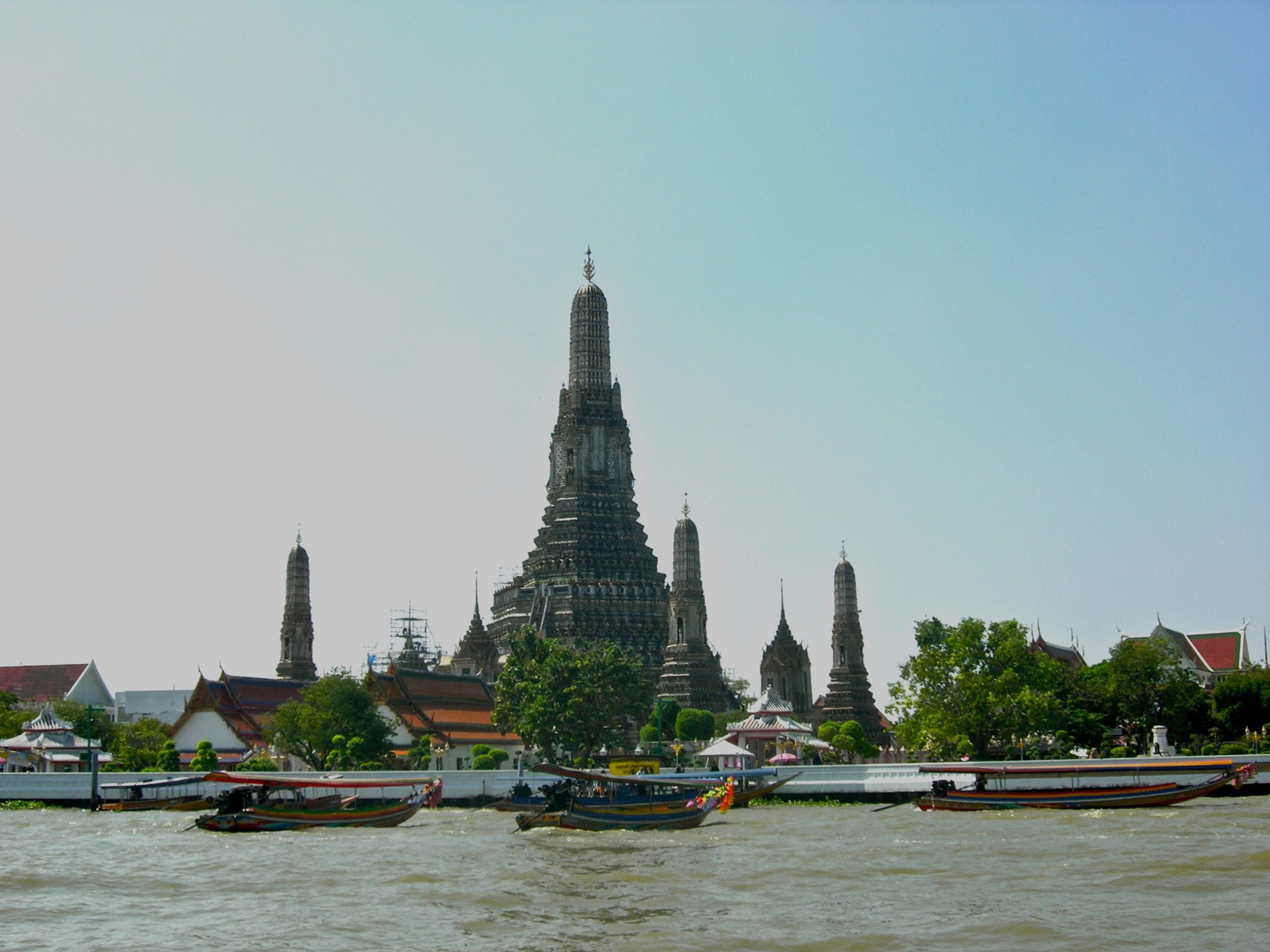 Bangkok is not generally known as a focal point of the world’s religions, but its coffee-coloured river would have it different. Languid and long, the Chao Praya is one of the great waterways of the Orient, a working river plied by myriad different craft, large and small, noisy and silent, all with a purpose.

In places the river throws up a cacophony of horns, rushing water, shrill long-tail boat engines and the steady throb of a tug boat’s diesel turbines, gently pulling enormous barges with cargoes not of “ivory, and apes and peacocks, sandalwood, cedar wood and sweet white wine” but entirely more prosaic: sand, rice, lumber, garbage and even soft drinks.

What poet John Masefield would have made of this riverine transport route one can only guess, but he might have noted something unseen to most who travel on it. It is a spiritual highway.

An elaborately adorned Chinese temple fights for space on the East bank of the Chao Praya River near Nonthaburi.

Buddhist temples, Catholic churches, Muslim mosques, Hindu shrines, Chinese Taoist places of worship line the river banks from old Siamese capital Ayutthaya all the way through modern Bangkok to the sea and the Gulf of Thailand.

It is an unlikely spiritual highway, just a kilometer away from the seamier side of the capital, yet for more than half a millennium the lugubrious waters have reflected so many spires representing so many faiths.

Thailand is 98 percent Buddhist but its constitution protects freedom of worship, as long as there is no proselytizing or discrimination.

The spectacular Temple of the Dawn and dozens of gold-adorned Buddhist temples dominate the river scape yet it is the unadorned simplicity of the humble churches and mosques that is the traveller’s reward. Somehow the gaudy gilded chofah and mirror-tiled stupa make a perfect foil for the rare and austere crucifixes atop Western-style places of worship or the crescent moon symbol atop the mosques.

On the West bank of the river, not far downstream from the glittering Grand Palace and holiest spot in Thai Buddhism ”“ Wat Pra Khao with its Emerald Buddha ”“ can be found, for me, the prettiest church in all of Asia.

The Church of Santa Cruz in the historic Portuguese enclave on the West bank of the Chao Praya presides over the chaos of the working river.

The Santa Cruz church, with its faded burgundy dome and sun-washed cream walls, is like something from another world. This is partly because it is.

Today’s surviving edifice was designed in 1913 by Italian architects Annibale Rigotti and Mario Tamagno under the orders of King Rama VI.

Allies of the ancient Siam since 1516, the Portuguese made their presence felt by selling arms and ammunition to help fight the marauding Burmese. A Catholic church was built in Ayutthaya that survived until the final sacking of Ayutthaya and the relocation of the capital to Thonburi.

History has it King Thaksin decreed a new church could be built as recognition of the Portuguese support. Though never officially colonized, this influence was one of the earliest involvements of a colonial power in the region.

Records show the original church was constructed from wood from the upstream forests. It became a spiritual centerpiece for the growing new capital, frequented by Portuguese traders and their descendants. By 1835 the building had become dilapidated but a resident cardinal decided to rebuild it in bricks and mortar, naming it the Church of Santa Cruz.

Sitting in the pews listening to a Catholic service in Thai, 10,000 kilometres from Rome, surrounded by 14 sculptures depicting moments from the life of Christ and seeing the gentle Eastern sunlight diffused by the stained glass windows has to be not only a spiritual highpoint but a surreal moment for a visitor to Bangkok.

With a fine carillon of melodic bells, the rectangular shaped belfry plays host to an unforgettable moment in time, even if you don’t necessarily subscribe to the scriptures being intoned.

The rectangular belfry is decorated with stucco and contains dozens of bells, still chimed today on auspicious occasions. There are 14 sculptures depicting scenes from Jesus’ life, and the walls are decorated with stained glass reflecting biblical images.

The yellow-washed Holy Rosary Church, at home 10,000 kilometres from Rome.

Not far down the river, towards the Mandarin Oriental hotel, is another striking religious edifice that seems completely out of place in the chaotic cityscape of Bangkok, the Holy Rosary Church, which has an almost preternatural glow from its bright yellow paintwork.

Built in 1768 on land granted by King Rama I, the Holy Rosary Church was rebuilt in Neo-Gothic style just before 1900 when the soaring spire and magnificent statue of the Virgin Mary were created. Known by Thais as the “Kalawar Church”, the local name denotes Golgotha, the Jerusalem hill where Christ is said to have been crucified.

In the shadow of the Mandarin Oriental is one of Bangkok’s most frequented seats of Islam, the Haroon Mosque. Obscured from the river, the mosque has no architecturally distinguishing features, but it is packed at prayer times and the muezzin’s call is piercing because it is so unexpected.

The Riyadi Mosque is the focal point of a thriving Muslim community on the river north of Bangkok.

The Riyadis Sunan Mosque in Nonthaburi is one of the more imposing of its kind on the river and forms part of a thriving Muslim community that has lived in the area for centuries.

For sheer spectacle the fabled Temple of the Dawn, or Wat Arun, with its 70-metre central prang (spire) is one of the most prominent landmarks along the Chao Praya. Built in the 1700s by King Taksin the imposing temple was enhanced during the reign of King Rama II in the early part of the nineteenth century.

The Buddhist temple is named for Aruna, the Hindu god who denotes the rising sun. Encrusted with porcelain fragments which legend has it came from a sunken ship in the river, Wat Arun has a surreal sparkle about it in bright sunlight.

The Temple of the Dawn, or Wat Arun, the most photographed spiritual edifice on the banks of the Chao Praya River in Thailand’s capital Bangkok.

With a population estimated at 70 percent ethnic Chinese, Bangkok has dozens of ornate Chinese-style Taoist temples, some of which are to be found along the banks of the Chao Praya.

While better known for its more raunchy offerings the Thai capital’s spiritual side can be found in every corner, and there is no better starting point than on whatever bend in the river you choose to begin your journey.

Images courtesy of the author.