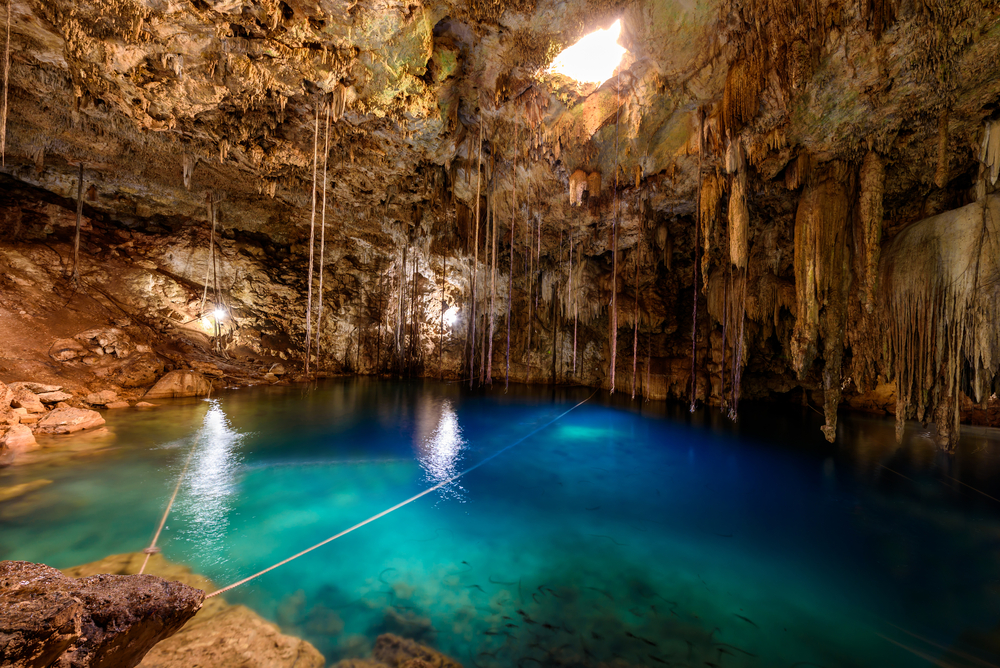 I am completely under a spell and it is all because of something called cenotes. Before coming to Mexico I had never even heard the word but from my very first descent into one of these secret wonderlands where ancient Mayans once came to commune with their gods I became intent on tracking down as many as I could.

The World’s Most Beautiful Sinkholes

Described to me as a sinkhole, I almost never discovered the enchantment of cenotes at all. The term sinkhole didn’t conjure up especially appealing images and I was reluctant to spend my precious time checking one out. The gods of travel decided otherwise though and a series of events brought me wholly by accident to the entrance of my first Yucatan cenote – X’Keken.

I followed the steeply descending stone and wood steps and emerged into a scene so fantastical I had to blink to be sure I was really seeing it right. The large cavern was filled with a crystalline pool in shades of impossible aquamarine hues, above which tree roots burst from the ceiling above and hung right down to the water’s surface.

A small gap in the roof of the grotto allowed the bright Mexican sun to throw a shaft of light below giving the whole an ethereal other-worldliness which is imprinted on my memory forever. It was love at first sight.

As I swam, totally alone after the only other couple visiting had left, in this secret and hushed underworld with fish darting around me, it seemed perfectly obvious that Mayan people of long ago would have believed these places brought them closer to their gods.

Having fallen so hopelessly in love my relationship with the cenotes grew to an obsession. Mexico is packed with the sensational but other options became all but invisible to me as I focused on fitting in as many cenotes as I could. It soon became very apparent, however, that I would need a lifetime to meet and greet them all.

It is believed the Yucatan peninsula is home to perhaps as many as 10,000 cenotes ranging from the touristy and developed to unnamed secret treasures which you can only hope to unearth by befriending the locals and heading off with a sense of adventure. 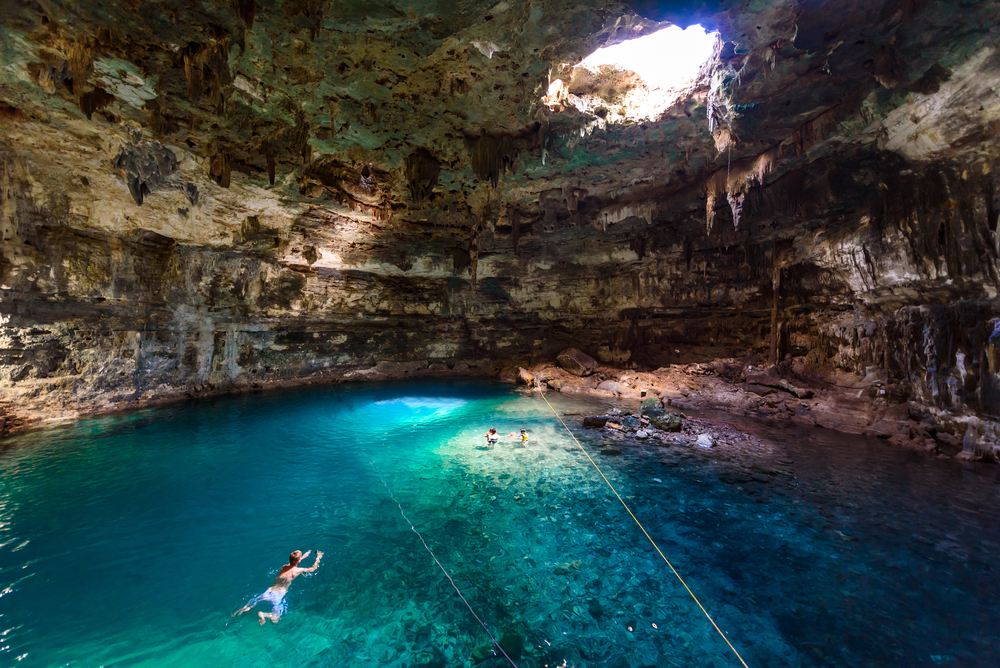 From Global Catastrophe to Spectacular Beauty

Despite my first aversion to the term sinkhole that is indeed what the cenotes are. They are formed as acidic rain that seeps into the limestone bedrock, causing it first to crumble and dissolve and finally collapse. But there is more to the story than that.

Cenotes occur elsewhere in the world but nowhere in the concentrated numbers as those found in the Yucatan and their distribution, when seen on a map, trace an almost perfect semi-circle. 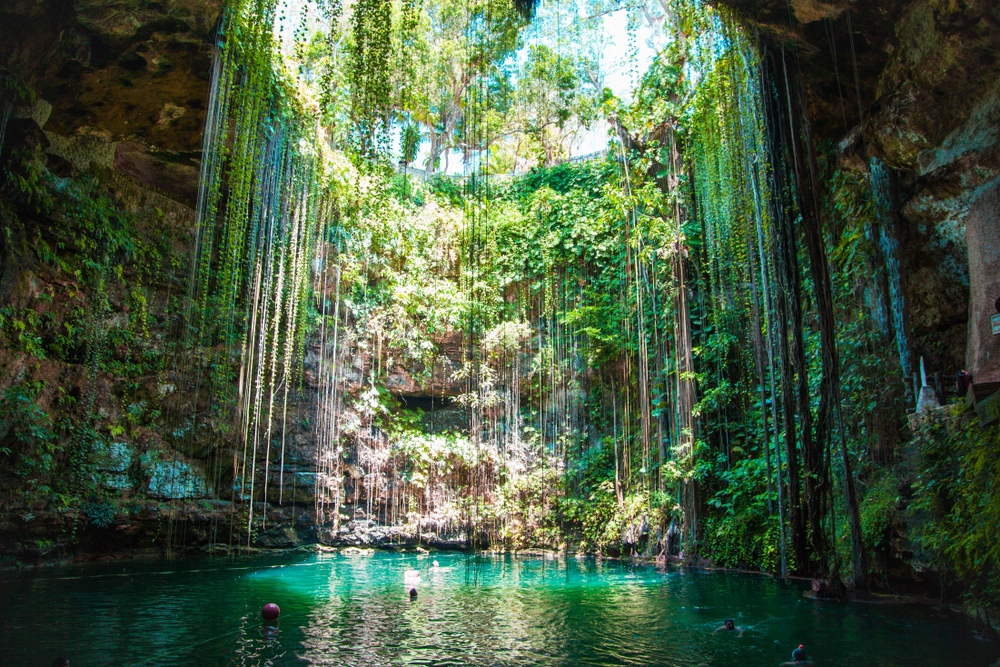 It is now known that this semi-circle is part of the 112 mile wide Chicxulub impact crater rim – evidence of the mighty asteroid which crashed into Earth 65 million years ago; the very impact in fact scientists believe may have triggered the end for dinosaurs.

For me, knowing this simply adds to the wonder of the cenotes: such incredible beauty born from such destruction. 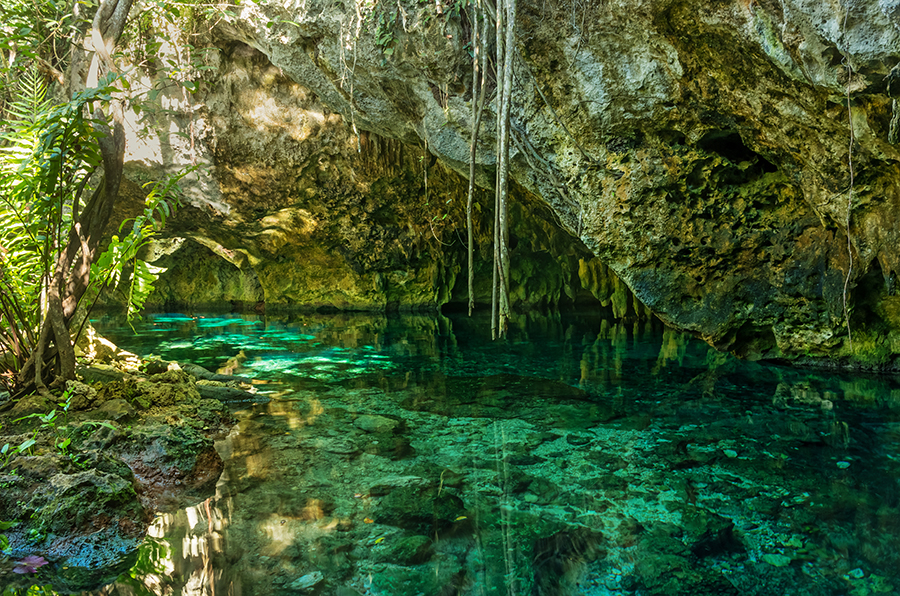 It is thought that all the Yucatan cenotes are linked and diving the underwater labyrinths is a popular thing to do, though not for the fainthearted.

Snorkeling is rather more accessible for most and the more enterprising locals have taken to renting snorkel gear outside some of the bigger and better known cenotes. Although I am typically an avid snorkeler I preferred to enter the turquoise waters unencumbered with any equipment. Besides, the water in so many of the cenotes is so totally transparent as to be virtually invisible anyway. 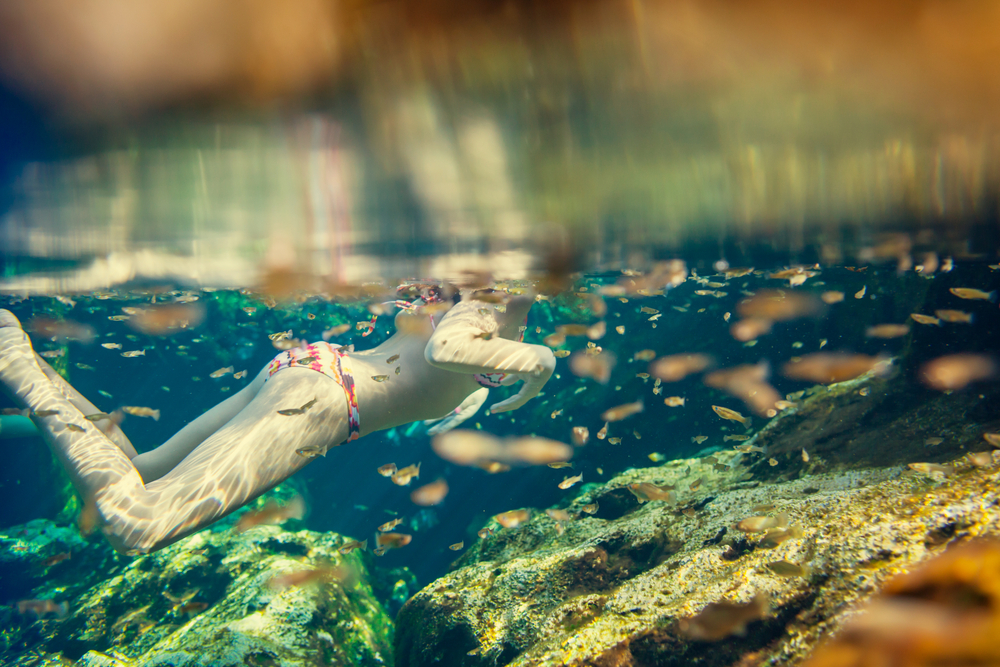 In the space of a few weeks I traveled from cenote to cenote, floating amid giant tree roots or beams of sunlight and swimming around dangling jungle vines and stalagmites which hung like giant icicles. Sometimes I simply gazed through partially collapsed roofs to the lush tropical greenery, birds and sky beyond. Most of the time I was totally alone or, at most, had to share with a small handful of others.

From Tiny Marvels to Open-Air Lagoons

I descended into these subterranean secret places down steps and ladders both totally secure and decidedly rickety; I sometimes half climbed and sometimes half fell down slippery tunnels and even scrambled through the tiniest of holes on my hands and knees. 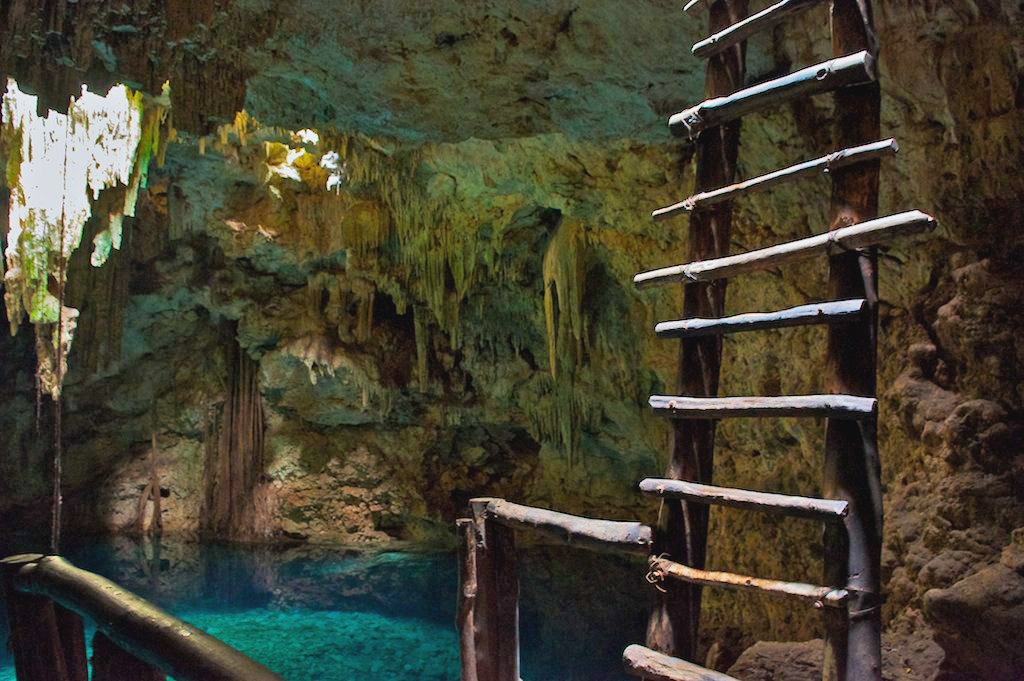 I entered into spaces which were little more than narrow shafts while at other times I basked in the sunshine at open-air lagoon-like sites. At all of them started to find words for colors I am not sure I had ever seen before outside of paint charts. 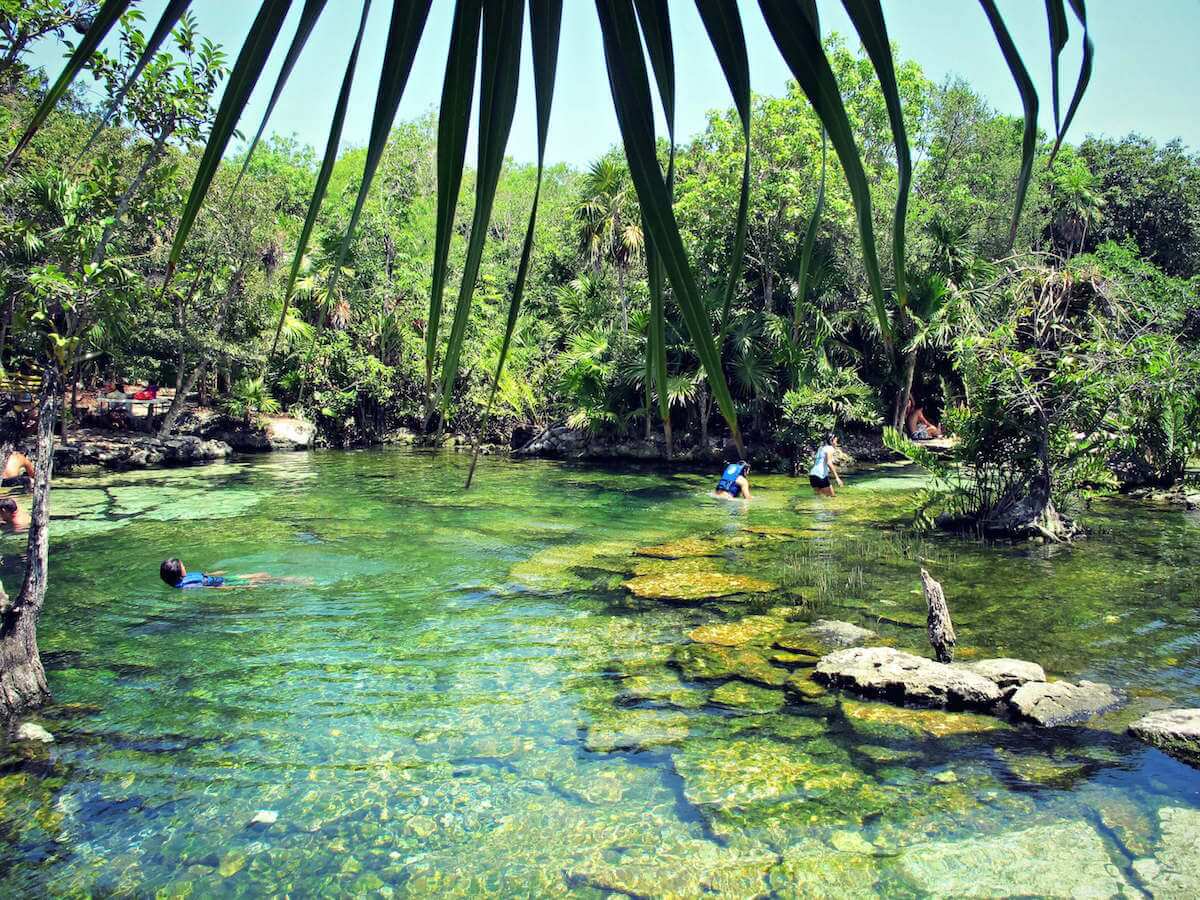 Cenote Azul – one of the open-air options

I have been incredibly fortunate in my world meanderings. I have surfed with wild dolphins, swum alongside behemoth-sized whale sharks and floated in a lake where every movement of my hand left a trail of sparkling phosphorescence in the humid tropical night. I have leaped out of planes, seen the Northern Lights blossoming vivid greens across the sky and so much more. And still the Mexican cenotes have stirred a certain something in my soul which nothing else ever has. In fact, experiencing their magic, mystery and sheer jaw-dropping beauty has been one of the biggest privileges of my life.