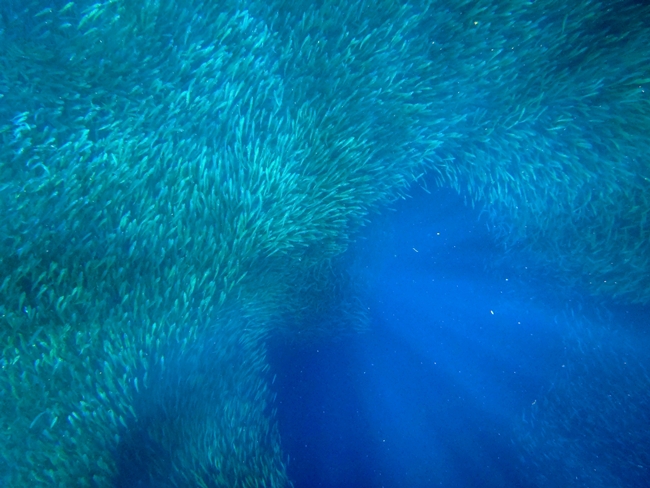 Another finalist in the ‘Wego Life-changing Travel Stories from the Philippines’ competition, Edwin Castillon takes us under the sea to encounter one of the most spectacular dive experiences, near Cebu.

I heard my heartbeat slow down. My head swooned and my mind was entranced by the hypnotic rhythm.

Then they came. En masse.

It was euphoria. Pure bliss.

The water, the tranquility, and the sardines.

They were so thick that it covered us, the reef, and the tiny Pescador island of Cebu. There were fish everywhere as I dove down. I looked to my left, the sardines formed a bait-ball ”“ wary of a strange big fish that came from the surface. On my right, they slowly converged to the left, joining the bigger group. They were so fluid; as if constantly spilling from one container to another. It was like a scene jumping out from a National Geographic documentary.

I would never forget that year. It was in 2011 that I witnessed this glorious sight on that island off Moalboal. A scuba diver brought me there, never knowing that it was the start of my underwater addiction. I have much to thank her, for she awakened the fish in me.

The sight never left my mind. It was unforgettable. I promised myself to go back.

millions of fish, breaking and grouping in split seconds ”“ a spectacle that makes you yelp underwater

Indeed, two months after, I came back and snorkeled in Pescador island again. I got mesmerized one more time by their sheer number, and by how they seemingly formed shapes. But still, I could only watch them from the surface, or maybe 10 feet underwater for a few seconds. It wasn’t enough; I couldn’t completely grok it’s fullness.

I never liked the deep sea that much. When I grew up in Bohol, I was happy and contented swimming in the shallow waters of Panglao island. I never ventured out in the deeper parts for fear of sea urchins and whatever lurks in the sea-grasses. I only swam usually at chin-level depth. Never beyond that.

glimpsing over a reef wall into the abyss

Two years and a freediving certification after, I finally could say I can conquer the deep. I could finally glide and fly in the aquatic environment, like a plane does in the atmosphere.

The rewards were ten-fold. I could stay about a minute underwater, as well as swim down as deep as fifty feet. Though not really remarkable stats in the freediving community, I felt this was good enough for me.

I came back to Moalboal knowing that I would have a better experience now ”“ I’m going to watch the sardines from the bottom.

Taking a deep breath, I swam down to about twenty feet. The sardines scattered, forming a hole in their bait-ball formation. I anchored myself on a huge rock and waited for the sardines to swim above me. A few seconds after, they did not mind me anymore and decided to close the bait-ball. Before they totally blocked the sky, I managed to snap a picture.

It was like angry storm clouds darkening the heavens.

My reverie was interrupted. All of a sudden there was a whirring sound as the fish scrambled to get away from something.

I remembered in that instant that the majestic thresher sharks where spotted in these waters. Feeding on the sardines.

I nervously turned my head and peeked at the abyss. Fear and excitement crept within me ”“ excited to see a shark face to face, at the same time afraid of what might happen.

how big is a regular sardine? this big!

It must have been a dorsal fin. Of a shark? That’s the question. It wasn’t very clear. But definitely I saw silhouettes of big fish ”“ tunas maybe ”“ a third of my size. They darted from the blue bottom but stopped short when they saw me. To say the least, I was frightened of them as they were of me.

I mentally sighed a relief that it wasn’t a shark, but was a tad disappointed on the other hand.

I looked up again and saw my friend, aunt and cousin disappear from view. Lost in the chaos of the sardines running.

The urge to breathe came; my body screamed for oxygen. It set-off defense mechanisms to preserve itself. Trying to get rid of the carbon dioxide build-up, it contracted my diaphragm every passing second. Eventually I couldn’t stand it any longer so I ascended slowly. The fish weren’t spooked; they still continued to huddle together where we were.

I breached the surface, felt the wind on my face again. I inhaled the sweet air that my lungs were craving for.

As with every ascent, the feeling of completeness and happiness engulfs me. More so, with every dive, starting from the very first time I saw the sardines, I felt the change in me. I’m transforming.

See more from Edwin at his blog, Lakbay Diva