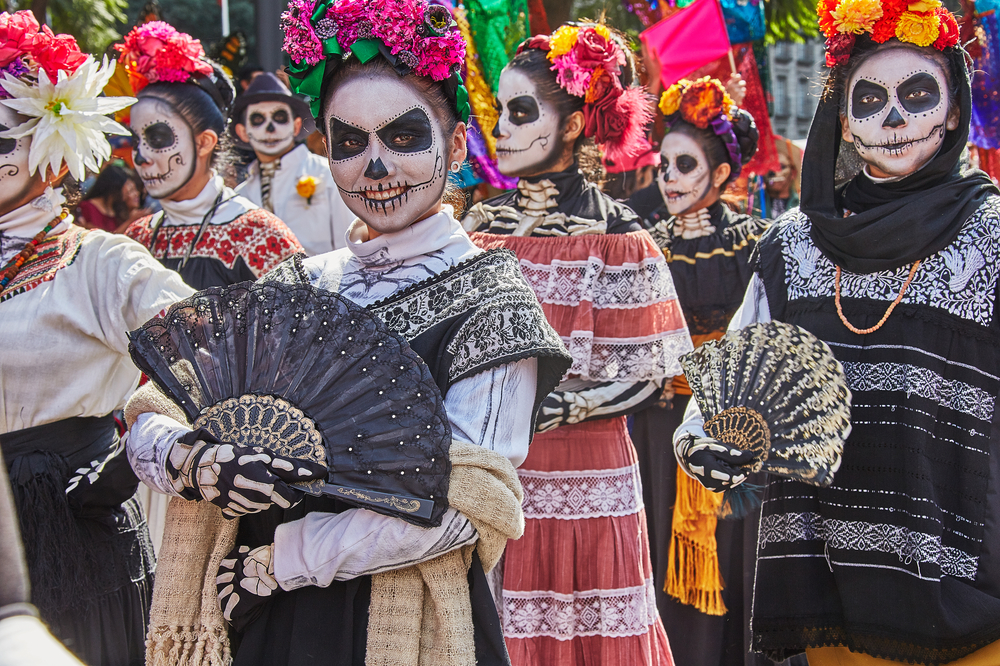 The Most Colorful Celebration of the Dead: All Skulls and Smiles on Dia de Los Muertos

Despite what many misconceptions, Día de los Muertos (or, Day of the Dead) is not the same as Halloween.

While contemporary Halloween traditions are much more lighthearted, like going door-to-door for candy and dressing up in salacious outfits for some others, its historical context is far darker. 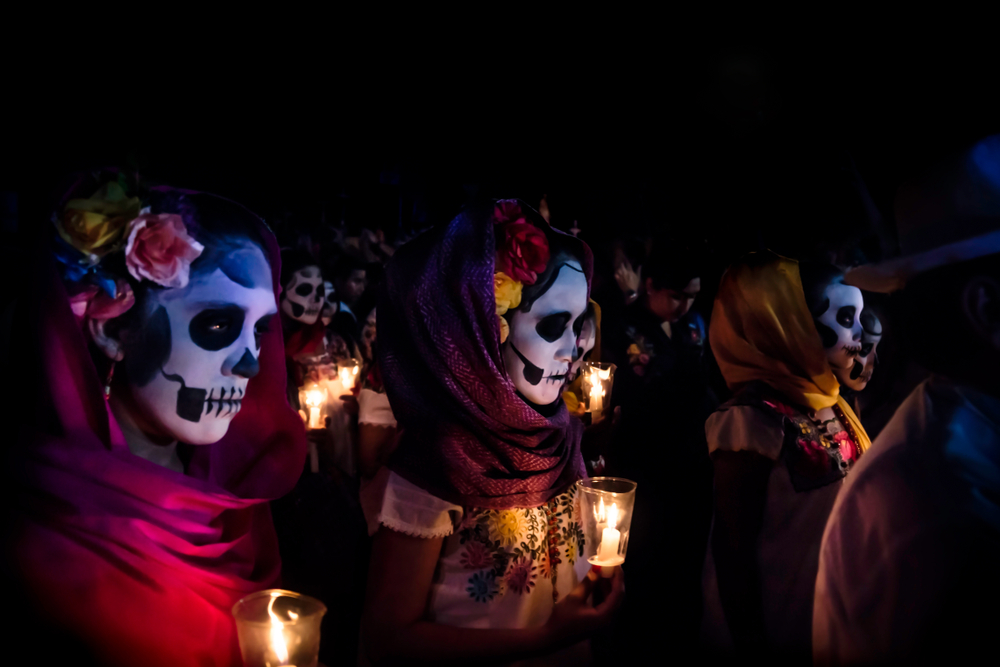 Día de Los Muertos, on the other hand, is about honoring and celebrating their deceased loved ones. The historical and deeply profound aspect of this tradition earned its UNESCO Intangible Cultural Heritage of Humanity listing. 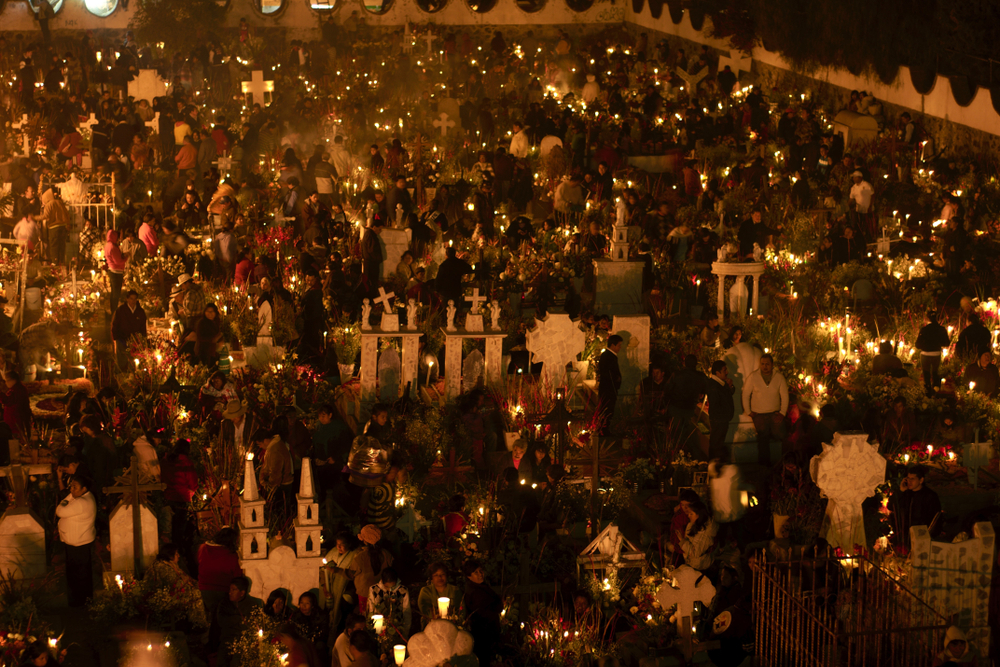 The celebrations span across 2 days, despite the singularity of its name, on November 1st & 2nd, and it’s truly a sight to behold. The streets come alive with parades, and people paint their faces vibrantly as song and dance breaks out at parties all over Mexico. 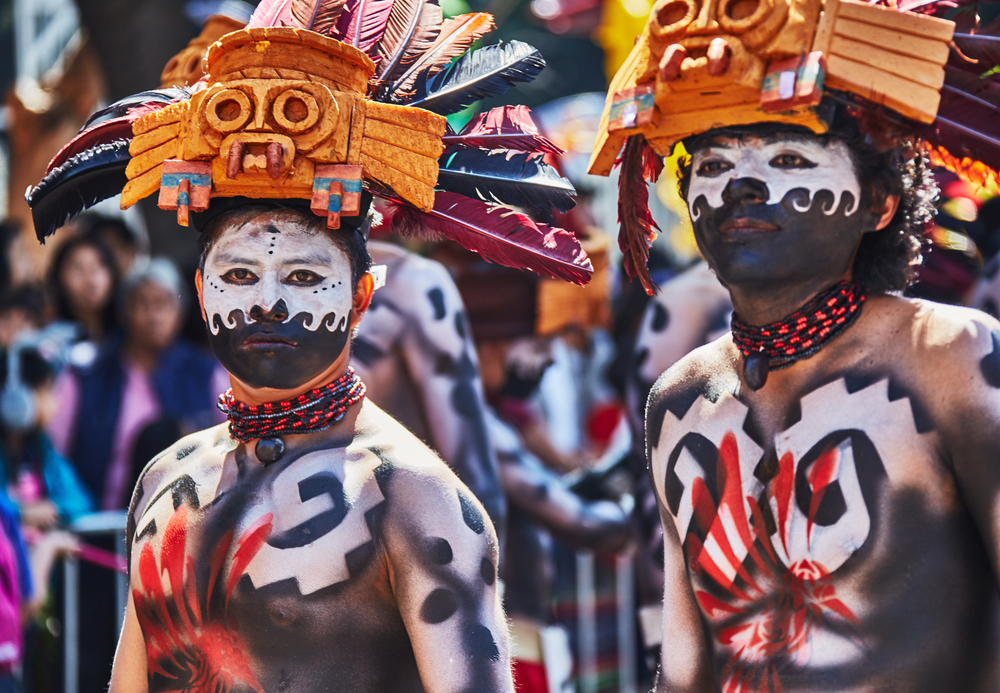 This tradition goes back thousands of years, all the way back to the Aztecs, but the modern-day rendition has elements of Christian influence. 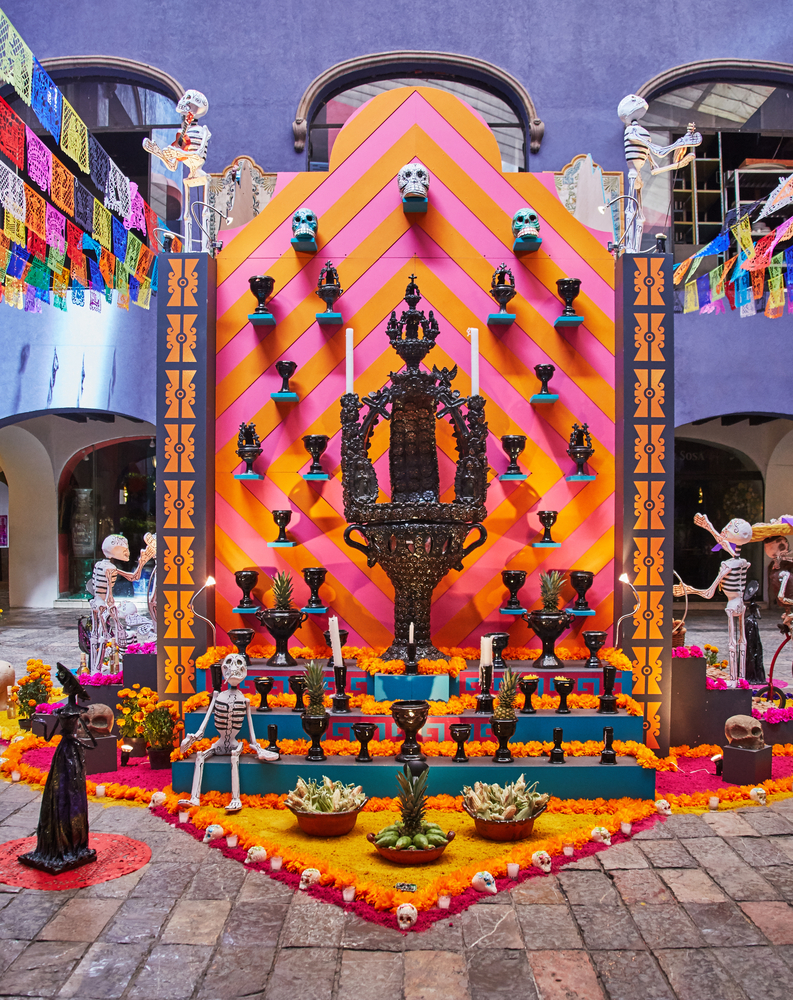 If you visit Mexico during this boisterous time, expect to be besieged by a flurry of psychedelic colors, with elaborate altars plied with ofrendas and cempasúchiles.

Streets, homes, and cemeteries would be lined with these altars, where stacks of sugar skulls and pan de muerto accompany the vibrant decorations as offerings to the dead. 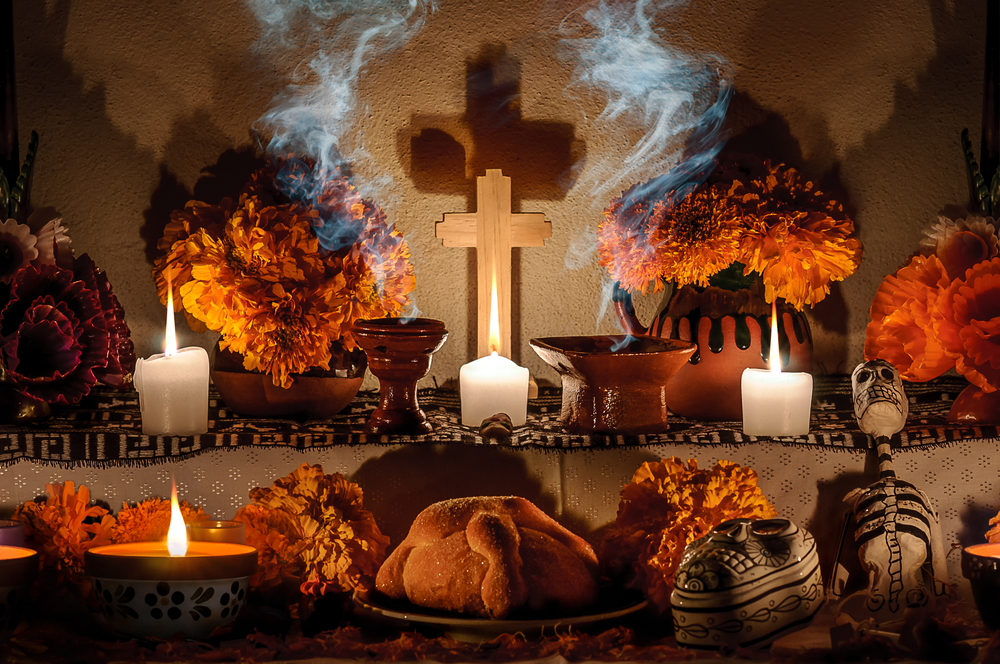 So let’s get into the details here: altars are accompanied with ofrendas, meaning offerings, that include a variety of food and drinks as a form of welcome to the dead who are revisiting the earthly plane. The ofrendas hold an elemental representation as well, of earth, wind, fire, and water. A jug of water, expectedly, represents water. 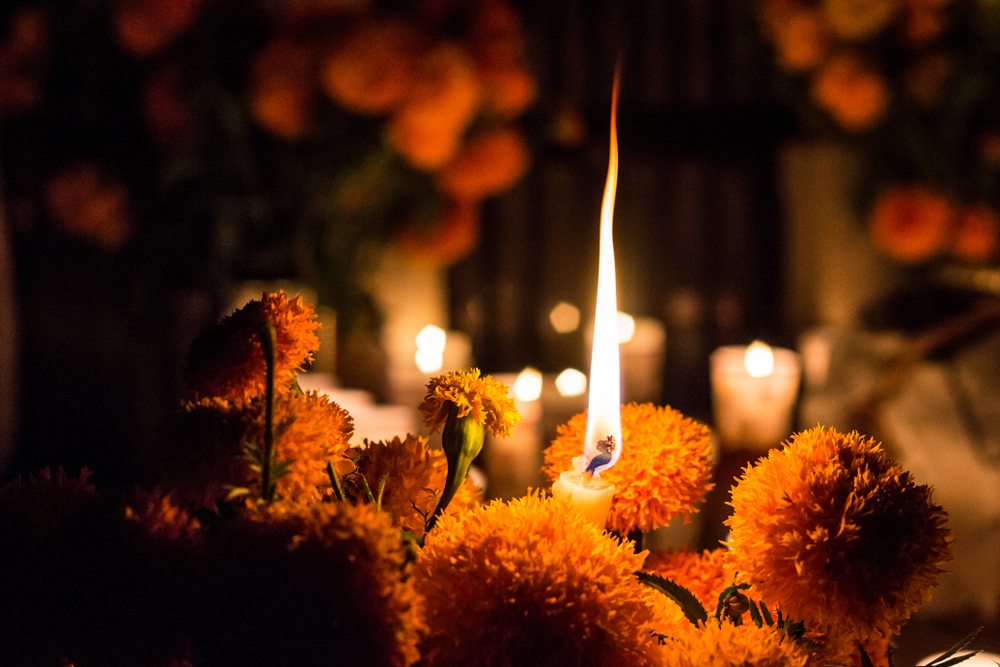 Cempasúchiles – brightly colored Mexican marigolds – are also ofrendas, which are believed to help guide the souls back, along with the soft glow of candles which represent fire. Part of the decorations are also calacas, which are skeletal figurines that are vividly embellished and clothed in elaborate traditional Mexican dress. 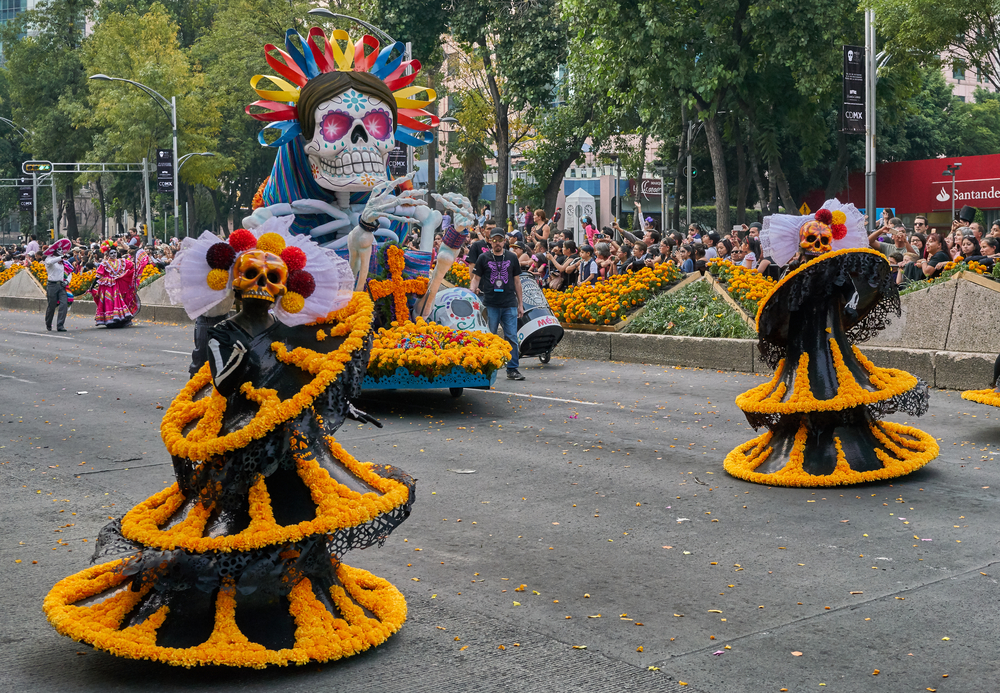 If you’re in Mexico City, expect to be treated to a sensory overload as thousands of people with their faces made up like La Calavera Catrina and clothed in ornate suits and dresses. They take to the streets for the Catrina Parade, abuzz with music, cheers, and chatter, as they celebrate those dearly departed. 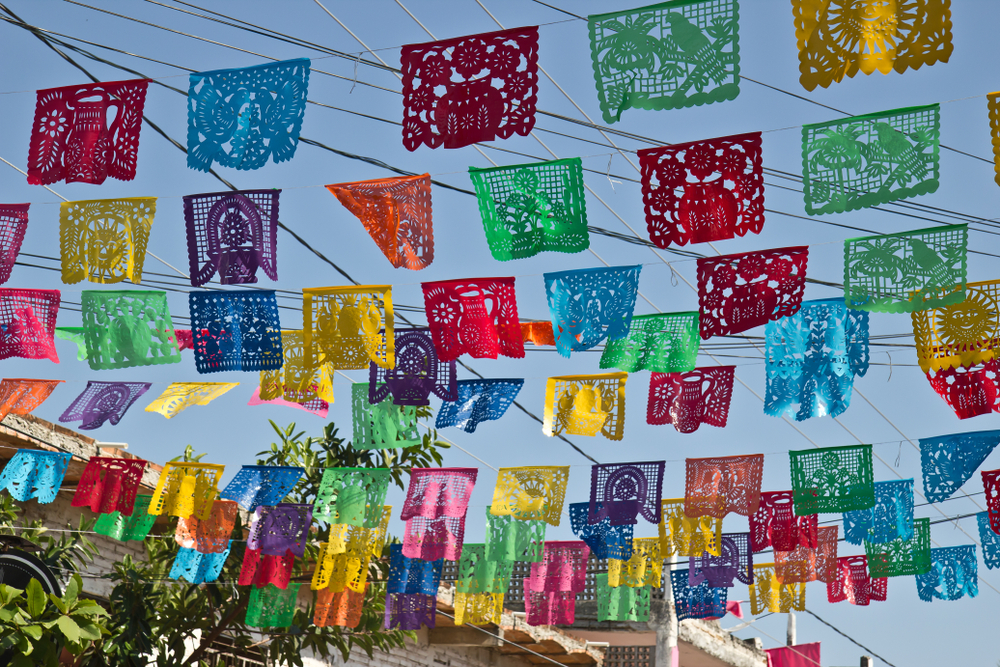 One thing you’d likely find familiar during Día de Los Muertos would be the papel picados. A common fixture in Mexican establishments in the US, these quirky paper cutouts explode all over during the celebrations. Translating literally into ‘pierced paper,’ the colorful pieces hold profound significance over this period, representing the element of air, and depicts a variety of elaborate symbols and characters. 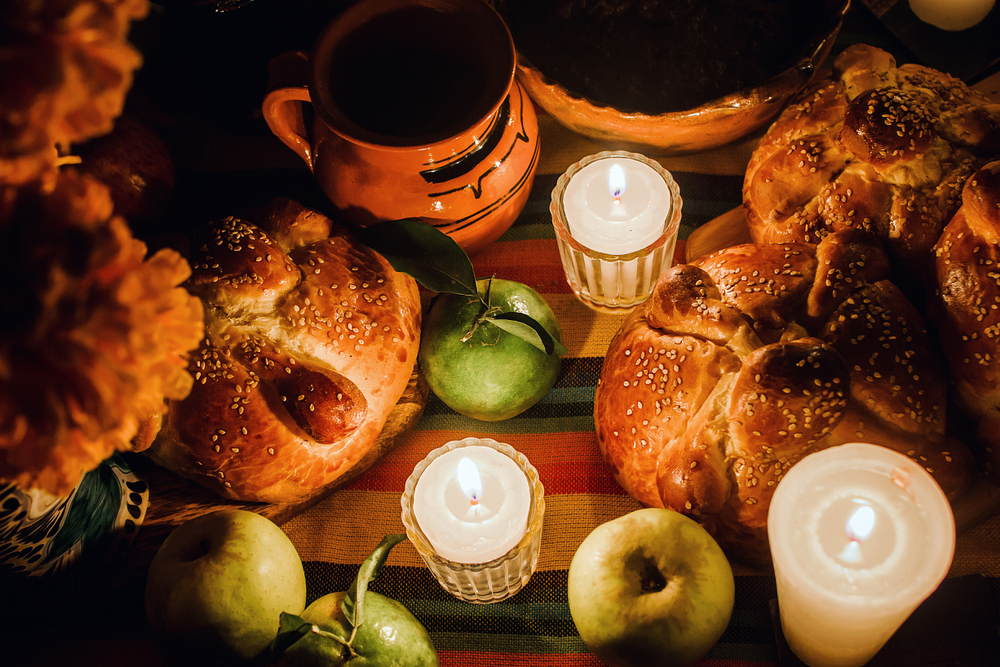 Accompanying the wealth of traditions and activities, of course, is food. Perhaps most iconic are the pan de muerto and the sugar skulls (which also has renditions made in chocolate and biscuits). The pan de muerto is a sweet bread, decorated with bones and teardrops, and represents the element of earth. 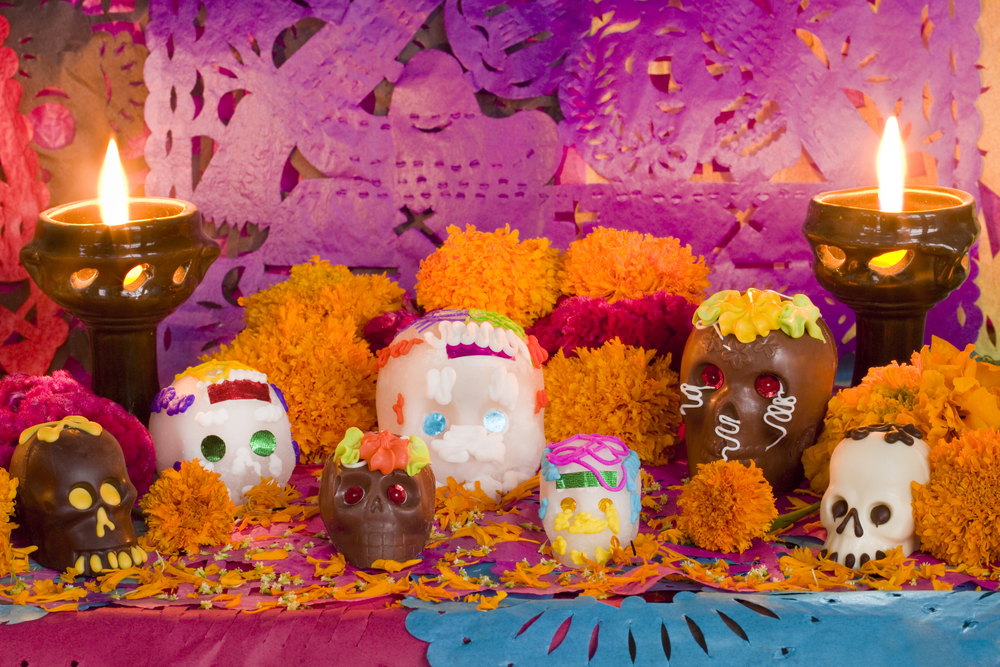 The sugar skulls, actually Italian of origin, come in all shapes and sizes and are decorated like an artwork. You also have the pulque, a sweet fermented agave-based drink, atole, a candied watery porridge, and a very familiar drink – hot chocolate. 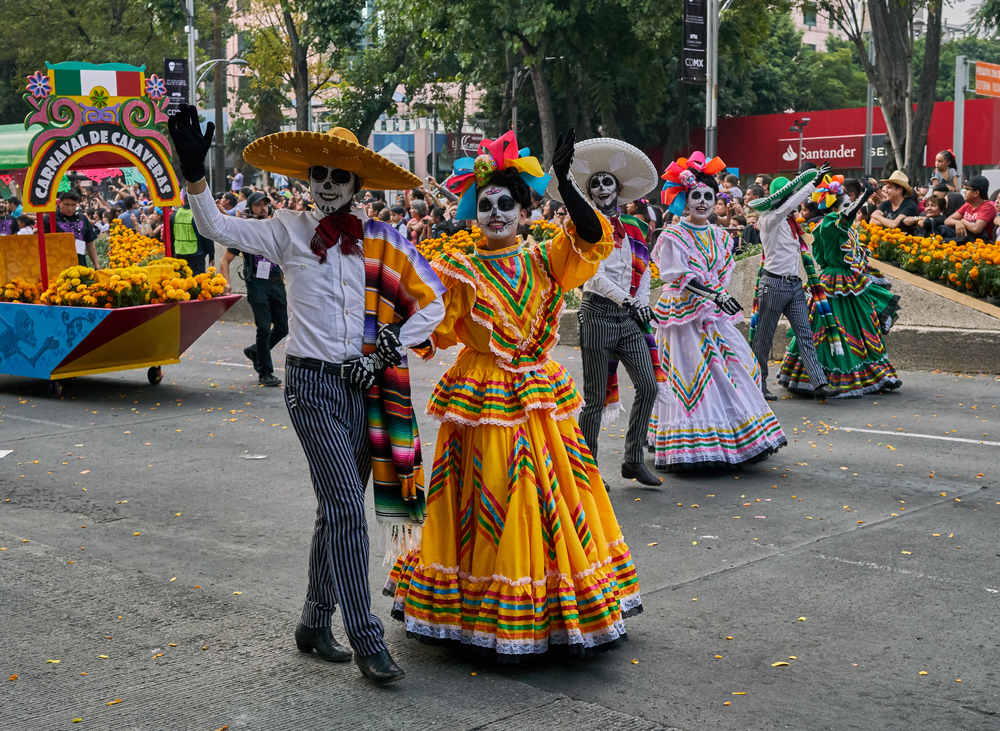 From Guadalajara to Tijuana, as you walk through the streets of Mexico on Día de los Muertos you’ll be flanked by sights, sounds, smells, smiles, and, of course, skeletons.