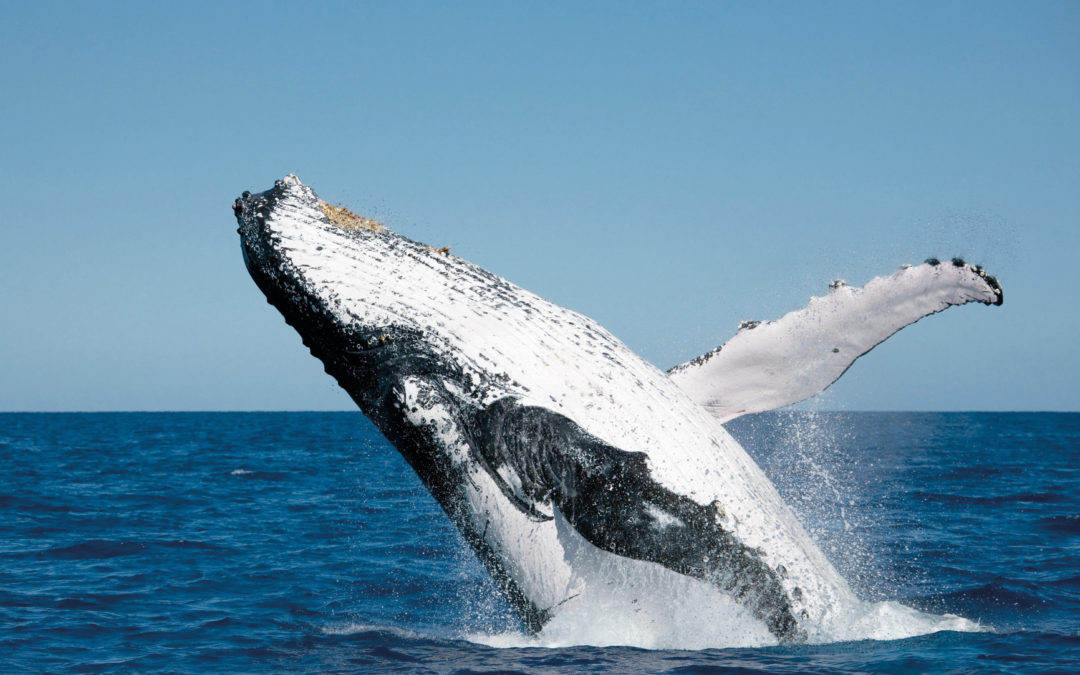 Do southern humpback whales frolic? It’s a question I often ask myself whenever I get up close and personal with a group of ’humpies’ relaxing in Queensland’s Great Sandy Strait off Fraser Island. While two adolescent male whales apparently show as much interest in a boat packed with cetacean-crazed travellers as the travellers do in them, I’m inclined to say yes, they do frolic in the limelight.

Like kids on a sugary lolly rush, two young whales play near our boat with boundless enthusiasm, flipper slapping, tail wagging, body rolling and head bobbing. They run the full gamut of recognised southern humpback whale play, much to the audible delight of all the passengers on board the Quick Cat 2.

Nowadays, passengers are encouraged to create lots of noise when whales are sighted to attract their attention, hopefully encouraging enough curiosity in the whales to linger socially around the boat. When I first ventured on a southern humpback whale sighting adventure in Hervey Bay some twelve years ago, the overall experience was marked by hushed solemnity, as if simply being silent in the presence of these endangered animals was sufficient thrill in itself. But times have changed and much has been learned about southern humpback whale behaviour.

The number of whales that migrate along the eastern seaboard of mainland Australia has increased to such an extent that no longer are whale sightings considered rare events. Instead it has become commonplace during their late winter and early spring migration to see southern humpback whales all along the eastern shore of Australia from the northern extremity of Queensland’s outer Great Barrier Reef to southern Tasmania as the whales proceed to summer feeding areas off Antarctica’s icy shores. But Queensland’s Great Sandy Strait is undoubtedly whale watching central.

Previously hushed day trips out to the calm waters of shallow Platypus Bay off Fraser Island are no longer quiet. Southern humpback whales are attracted to noisy human activity. Waving, shouting, trilling and singing are encouraged by captain and crew. Don’t be surprised to find that whale watching trips in the Great Sandy Strait have become significantly louder on the decibel scale. I have the questionably good luck to be standing next to a young boy whose ability to replicate the sound of a revved up jet engine guarantees that all whales within earshot swim to us as quickly as their big fins can manage. The whales appear enthralled that such a small animal can make such a piercingly loud noise. I plant my hands over my ears and enjoy the spectacle of large whales peering intently at a small human who is peering at large whales but can’t determine which is more fascinated by which. I am also enthralled that such an incredibly visceral noise can be uttered by a human adolescent.

Last year’s southern humpback whale watching season was hugely successful. As the population of whales recovers from ruthless hunting, evidently the whales’ collective genetic memory is shifting from innate fear to curious interest. The whales show little wariness of humans while they rest at their historical watery wayside in the tranquillity of the Great Sandy Strait en route to Antarctica. A few individual whales have become familiar, recognised regular visitors, a positive sign as to the longevity of the species and the effects of long term protection.

The protected waters between Fraser Island and Queensland offer safe sanctuary for mothers with calves, adolescent whales gaining strength for the long swim south, mature males stopping in for a spy-hop or two, checking out females for potential future dalliances and whole family groups of mixed ages. Some whales stay only for a day. Many stay for five days or longer. Quick Cat 2 skipper Brian Perry tells me that from only dozens of whales spotted during an entire season in the late 80s, the number of southern humpback whales lounging around near the white sandy beaches of Fraser Island’s western shore has since grown to hundreds if not thousands.

I relish the opportunity to spend more time interacting with whales and less time spent travelling between Hervey Bay’s marina and Platypus Bay. Luckily I’m rewarded with dozens of sightings. A female courted by three young males breaches fifty metres from the boat. The males take turns spy-hopping, balancing on rear fins. Their massive heads are completely out of the water as they all have a long look around. The female takes the opportunity to elude her bothersome suitors. They’re too young for serious mating activity. For now, it’s a practice game, fun for them, annoying for the female. Another female with a young calf, six months old Perry estimates, cruises near the boat. She shields her calf constantly but shyness is overcome by inquisitiveness while mother and infant both check out the hullabaloo coming from aboard the Quick Cat 2.

After five hours of whale watching, Perry and crew circulate word that it’s time to head back to Kingfisher Resort. When a waiter at the resort’s bar told me the night before that it was like ’whale soup out there in Platypus Bay’, I nodded complacently, not believing a word of it. The most whales I’d seen on previous trips never exceeded ten at most. Today I’ve seen over thirty, whale soup indeed.

HerveyBay is the closest airport to FraserIsland’s Kingfisher Bay Resort. Virgin and Jetstar airlines both offer daily flights from Australian capital cities. Transfers between the airport and the resort may be booked via www.kingfisherbay.com

Images courtesy the author and Tourism and Events, Queensland