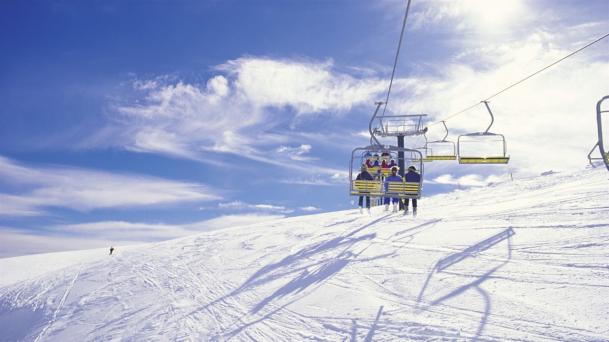 Snow-capped mountains and sensational ski resorts are not usually what comes to mind when you think of Australia. In the country’s southern state of Victoria however, there’s a virtual winter wonderland where crisp mountain air, blue skies and soft white snow await.

There are hundreds of ski-runs across ten great alpine locations, just a day trip north of Victorian capital city, Melbourne. You could fit Mt Donna Buang and Mt Baw Baw into a day trip if you’re an early riser. Downhill ski at Mt Buller or cross-country ski the powdered trails at Falls Creek. Snowboard Mt Hotham’s half pipes and terrain parks or hurtle down the boutique slopes of Mt Buffalo. Trek in snow-shoes from Mt Baw Baw to Mt St Gwinear and toboggan or sled at pretty Lake Mountain.

There’s a wild variety of winter activities at Mt Buller, an easy three hour drive from Melbourne. You’ll find ski slopes to suit every ability ”“ from the green runs of Bourke Street, Baldy and Burnt Hut Spur to breathless black runs such as Federation in the south. There are also three great gradients for snowboarding and 9km of challenging cross-country trails looking out over Mt Stirling and the Bluff. Ski or snowboard under the stars between July and mid-September. Trek to the top of Mt Buller in snow-shoes, whirl down the mountain in a rubber tube or free up your feet in short skis known as ’figgles’.  Just next door is the less-developed resort of Mt Stirling, with more than 60km of cross country and free heel ski trails cutting across the cloud-like slopes.

It’s all action at Falls Creek, which sits in Alpine National Park in the scenic Bogong High Plains, a four and a half hour drive from Melbourne. With more than 90 runs and 20 cross-country trails, you certainly won’t run out of things to do. Ski down the steep, expert slopes at Mt McKay or brave the deep powder stashes of Rocky Knobs and Dam. This is Australia’s cross-country skiing capital, and you can zig-zag between the snow-gums on the same trails as the national team. In August the mountain hosts the Kangaroo Hoppet snowsports event. If that sounds too competitive, embrace your inner child by making snowmen, bouncing off a snow bungy trampoline or spinning down the slopes in a tube or toboggan. Explore the back country in Nordic snow shoes, on a snowmobile or along Australia’s first snow bike trails. Toast the sunset from the 1,800m summit or take a heli-flight across Mt McKay and Mt Feathertop to Mt Hotham.

The more conventional route to picturesque Mt Hotham is driving the Great Alpine Way or flying to Hotham airport from Sydney and Melbourne. Once here, test your skills on the wide, gentle slopes of the Summit or Big D Playground and glide down the Milky Way. More advanced skiers can fly over the chutes and steeps around Mary’s Slide, the bumps on Blue Ribbon or head to Heavenly Valley for heady black runs. For snowboarders, Hotham offers gullies, bowls, hits, berms, lips and open stashes so slick many stunt skiers have cut in on the action.  Cross-country ski across Hotham’s pristine, powder-covered back country on the many free trails, including the Pub to Pub from Mount Hotham’s General Store to the Dinner Plain Hotel.  Spend the night in Dinner Plain’s pretty village and test out its gentle beginner-friendly slope the following day.

You’ll find Mt Buffalo further along the Great Alpine Rd, past the charming, tree-lined town of Bright. This small, fun and affordable village is set against an imposing granite landscape cloaked in soft  snow.  Cross-country ski on 14km of marked trails, 20km of remote, unmarked trails or take a map and make your own way through the back country.

Mt Baw Baw sits two and a half hours drive from Melbourne, but it only takes one lungful of the crisp, clean mountain air to forget the city. Explore the picturebook village overlooking the Latrobe Valley and Mornington Peninsula. Then get inclined on downhill trails connected by seven ski lifts.  Or carve your way cross country on 10km of sheltered and groomed trails to the Baw Baw Plateau, Mt St Gwinear, Mt St Phillack and the Alpine Walking Trail. Tranquil Mt Gwinear is a destination in itself, offering 20km of cross country ski trails, two toboggan runs and free snow shoe paths.

It’s less than two hours from Melbourne to the Narnia-white world of Lake Mountain, a place where you can get around on skis and snow play is a serious pursuit. There’s a ski school for beginners and almost 40km of cross-country ski trails for the confident. For fast fun that requires less skill, whizz down the mountain in a toboggan or a giant lifesaver-like tube. Start on the gentle village run, brave the bumps at Koala Creek or hurtle down at Arnolds Gap. Afterwards, take a motorized sled ride that would thrill Santa’s elves or embrace your creative side in a snow sculpture competition. Past entries have included dolphins, cars, wombats and a whole cast of snow people.

Throw snowballs, go tobogganing, trek behind wombat tracks or climb the 21m viewing tower at Mt Donna Buang. At just over an hour from Melbourne, it’s perfect for a winter-white day getaway. If you didn’t think Australia had snow, a visit to Victoria’s snowfields will have you convinced.