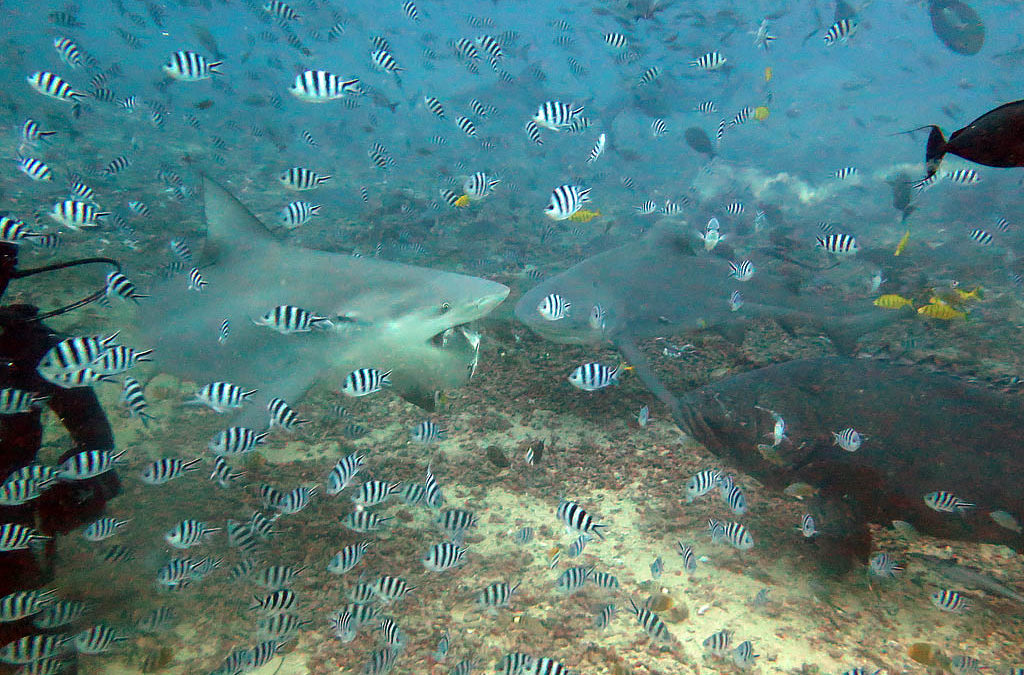 Joeli is taking us for a sneak preview of a new shark dive in Beqa Lagoon in Fiji, it’s third, and if the other two sites are anything to go by, it will very quickly become a sell-out site that you need to book weeks in advance, and Joeli has been instrumental in getting it established.

Joeli has been in the shark dive business a long time, starting his shark-dive career at Beqa Lagoon’s first with Aqua Trek.

The Aqua Trek shark dive is at a site called The Bistro, on the mainland reef to the south west of Pacific Harbour. While the site is run by Aqua Trek, they allow other resorts to bring divers to the site, and each one has their own mooring.

There’s a sense of anticipation, mixed with a little bit of anxiety as we wait for all the boats to tie off before we start the slow and methodical process of gearing up.

More attention than usual is paid to our equipment and gauges, as we’re trying not too hard to think about the sharks already assembling in the steel blue waters below our boats.

Zipping up a 3mm wetsuit, we’re wondering whether we shouldn’t be stepping into chain-mail suits instead.

There is a short period of waiting, as the shark dive operator readies the bins of chum and fish scraps, and starts to tow them over to the site. Then, by some hidden signal, we’re told “It’s time ”“ we’re going in!”

Normally when divers have been gearing up on a boat and are informed “Pool’s open guys!” there are whoops and hollas as we giant stride or somersault into the blue off the back of the boat. Not today. There is a quiet reverence as we slip into the water, hugging the hull, and creep down the bow line.

As the divers from each boat come within sight of each other and the ’arena’, it’s a bit like the scene outside of a football game, everyone heading in one direction to grab the best ringside seat. The difference here though is that we’re all one the one side, not quite sure who’ll be coming along from the other team.

In the middle of the Bistro is a vertical line and a bin full of fish scraps has been slung from it about 10m up. It must be slowly dispensing its contents as, what can only be described as a swarm of fish ”“ a ball about 8m in diameter, circles it.

To my left and right, shoulder-to-shoulder, divers are kneeling in a line, GoPros-on-a-stick at the ready.

GoPros at the ready

As luck would have it, I seem to have ended up in a spot right in the middle: just in front of me is the main man who will be doing the feeding today. There is a rope that runs along the edge of the arena, which we have been told (several times), to stay behind.

Hopefully someone has told the sharks what that rope means too.

Whilst everyone is looking around for the visitors, a giant grouper calmly makes his way into the arena, and tries to persuade the feeder that he’s just a big hungry fish too.

Looking carefully into the swarm the unmistakable outlines of apex predators begin to appear, and then we can clearly see that there are at least six 3m bull sharks and a couple of lemon sharks. 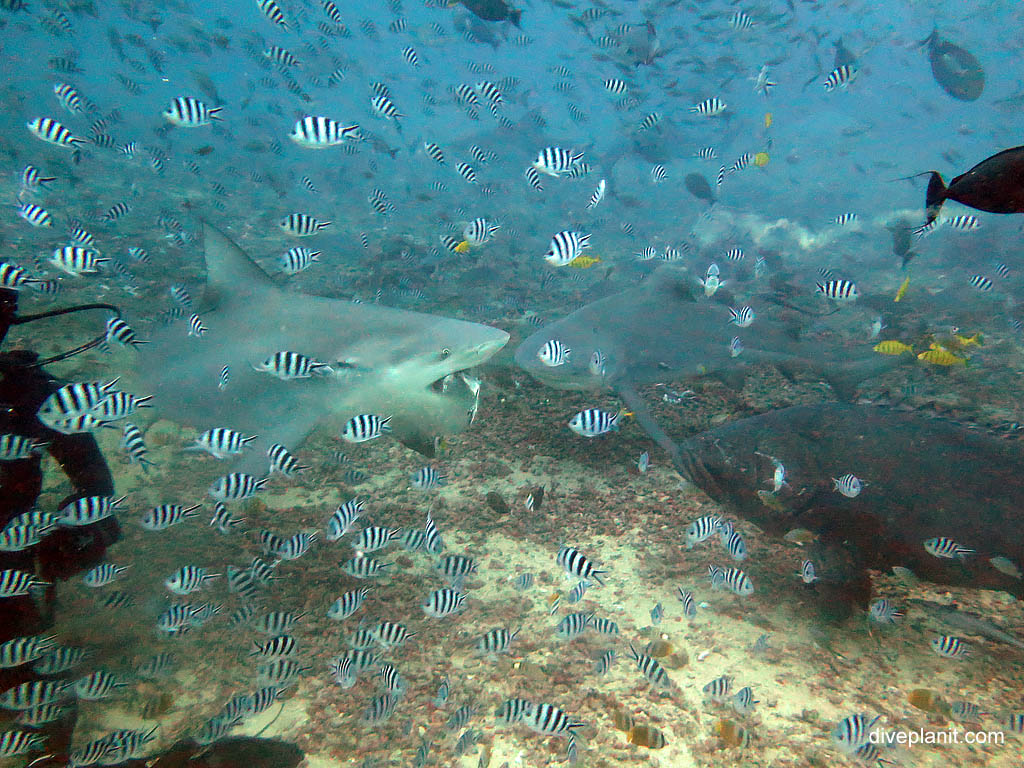 During the course of the next 20 minutes, the bull sharks come down out of the swarm and neatly take a piece of fish about the size of a tuna head from the feeder. The feeding is arranged so that as the sharks take the bait and are positioned to swim directly at the spectators.

They turn neatly before us left or right and head back around and into the swarming ball of fish. I realise now that it’s not the rope than that they respect as a boundary, but rather the wall of spectators’ bubbles that has thickened markedly as pulses quicken and breathing rates climb.

At one point the ball of fish expands supernova style to encompass the crowd and we’re festooned with strips of skin being nibbled on along its full length by either butterflies, sergeants or surgeons ”“ but only ever fish of one type per strip. And occasionally we see the mouth ”“ and teeth ”“ of something very big, snap at a strip and everything attached to it, very close by.

We were warned to keep our arms and cameras close to our bodies and not out at arm’s length. And now I see why; GoPros have been known to disappear from their stems.

The thick, powerful bodies of the bull sharks are unmistakable, and just occasionally you’ll see them face on, heading straight in your direction. Just as you’re about to duck they turn and you can feel the flick of the tail that scatters the fusiliers.

The lemon sharks tend to stay closer to the bottom and pick off any scraps that get left behind. It’s a lively whirling spectacle, and it’s hard to know where to point the camera next. It’s a bit like the finale of a fireworks show, but it just keeps going at full tilt.

All too soon the deco spectra looms, and the watchful dive guides appear with their crook shaped poles to shepherd their guests back to their respective bowlines. There’s a subdued excitement on the boat, as everyone who can, checks to see whether they did get that one great shot.

After an hour’s surface interval we go down to watch the re-match. Though it’s effectively the same show ”“ it’s just as good watching it a second time; and when the show is over, the feeder places a few leftover fish heads at strategic points between the arena and the bowlines, so that the bull sharks swim amongst the crowd as they return to their boats, tired, drained of adrenaline, but emotionally elated at having spent almost an hour up close and personal with the oceans’ apex predators.

So you can see the appeal.

The new Beqa Lagoon Shark Dive will take place on a reef about 2kms north of Beqa Island. The site has been carefully selected near a coral stack, and very close to the drop-off.

The moorings are in place, and a low wall has been assembled for the spectating divers to kneel behind, with the coral stack behind them. It will be very quick to descend the line and get into position behind the wall. The ascent can either be a scenic one rising slowing up the scenic coral stack, or more directly via the shot line.

The site has been primed now for about three months, and there are now consistent sightings of tiger sharks at the site.

Joeli and his team are very excited about it. There’s a real sense of ownership for the team with this new site, as locals have developed it with access granted by the village chiefs of Beqa Island.

Proceeds from the new shark dive will benefit the local community directly, so you can understand their excitement and hopes for its success.

On our preview visit, as well as the many resident butterflies, sergeants, surgeons and Unicornfish hanging about, two large tiger sharks came in for a feed ”“ very impressive creatures.

This will be the site’s differentiator. Tigers. The site’s proximity to the reef drop off means that we are more likely to see them here than at the other two shark dive sites.

The site is also incredibly pretty, like so many other dive sites in Beqa Lagoon, so if you get bored of watching tiger sharks, you can always explore the nooks and crannies of the reef behind you.

So what is it like to dive with sharks? Athough I’ve been led to believe bull sharks and tiger sharks are man eaters by mainstream press, I have to agree with Joeli. It’s all in the mind.

We look forward to returning to Beqa Lagoon Resort to see their new Shark Dive in full operation.