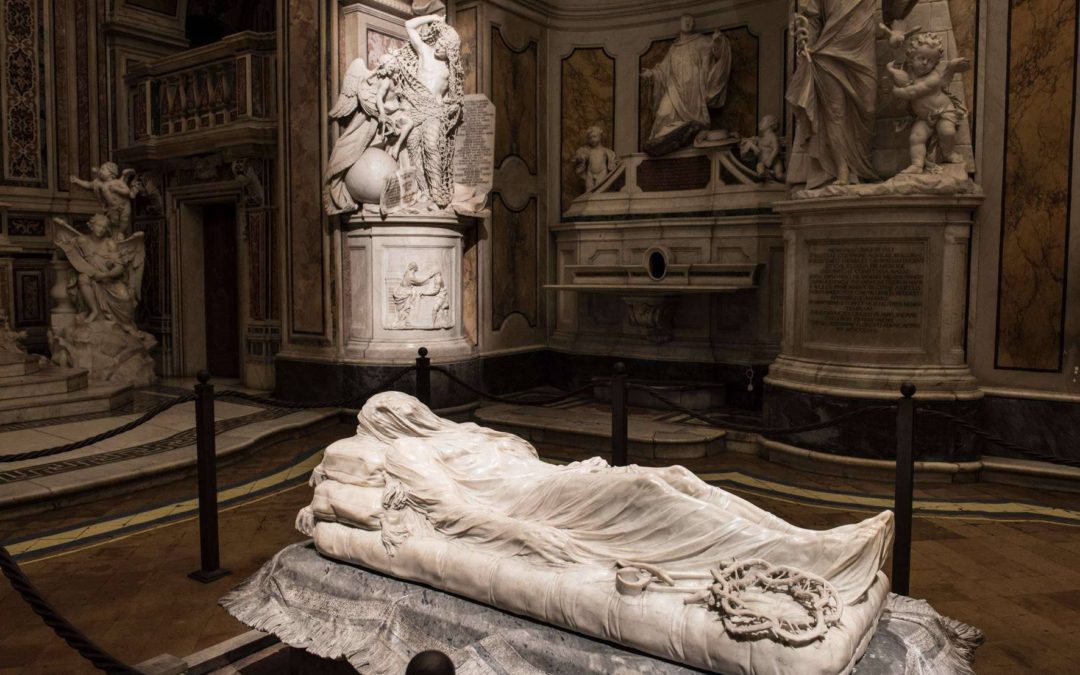 There’s No Way You Won’t Get Goosebumps Here: The Majestic and Macabre Marvels of Museo Cappella Sansevero

Located in the historic heart of Naples is a little baroque chapel full of enigmatic beauty. There is nothing to alert of the grandeur within the chapel from its outward appearance.

The entrance is unassuming, and its deep olive doors could easily open to any number of possibilities, but an initial glimpse into the softly illuminated interior will have you spellbound by the drama and mystery that permeates the air about the place. 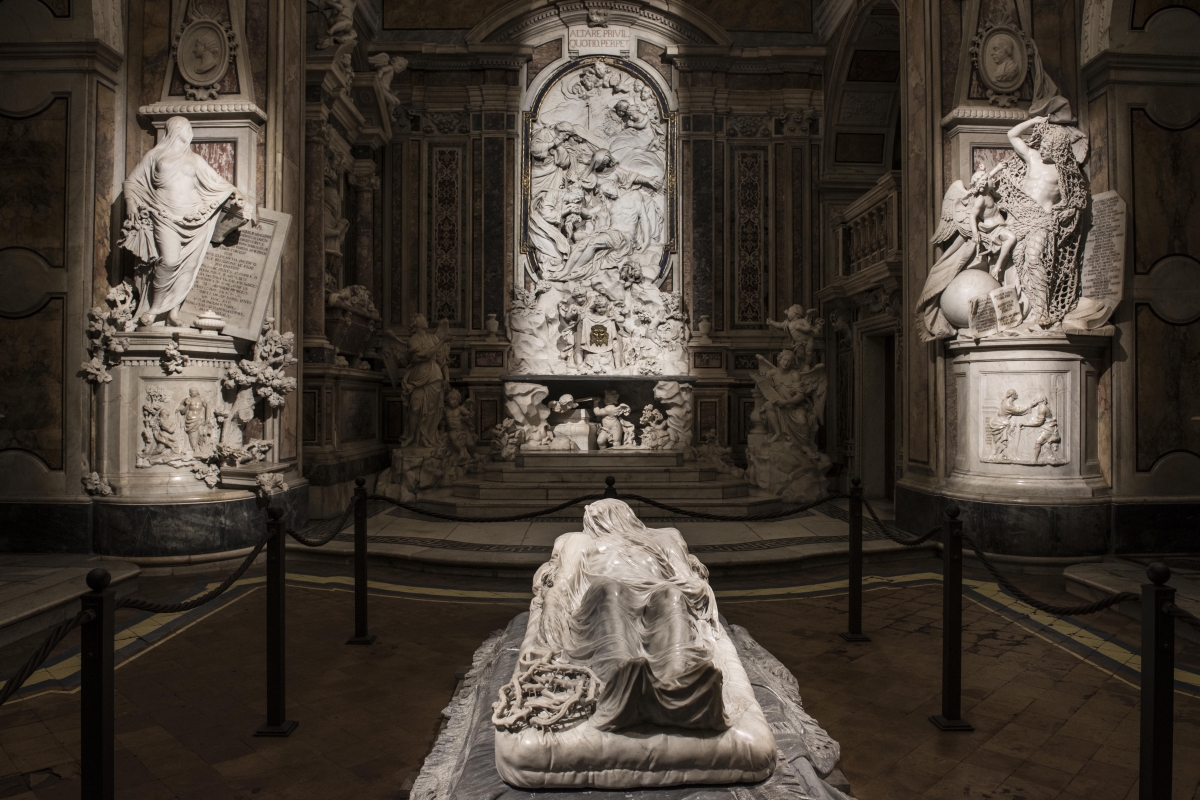 To step into the chapel is to feel at once out of time and transported back in time.

It was under the patronage of Raimondo di Sangro, the Prince of Sansevero that the Cappella Sansevero came to be reconstructed and decorated with some of the best works of Baroque art. The Sansevero Chapel served as the private mausoleum of the Sansevero family, and its beauty elevated the prestige of the di Sangro household. 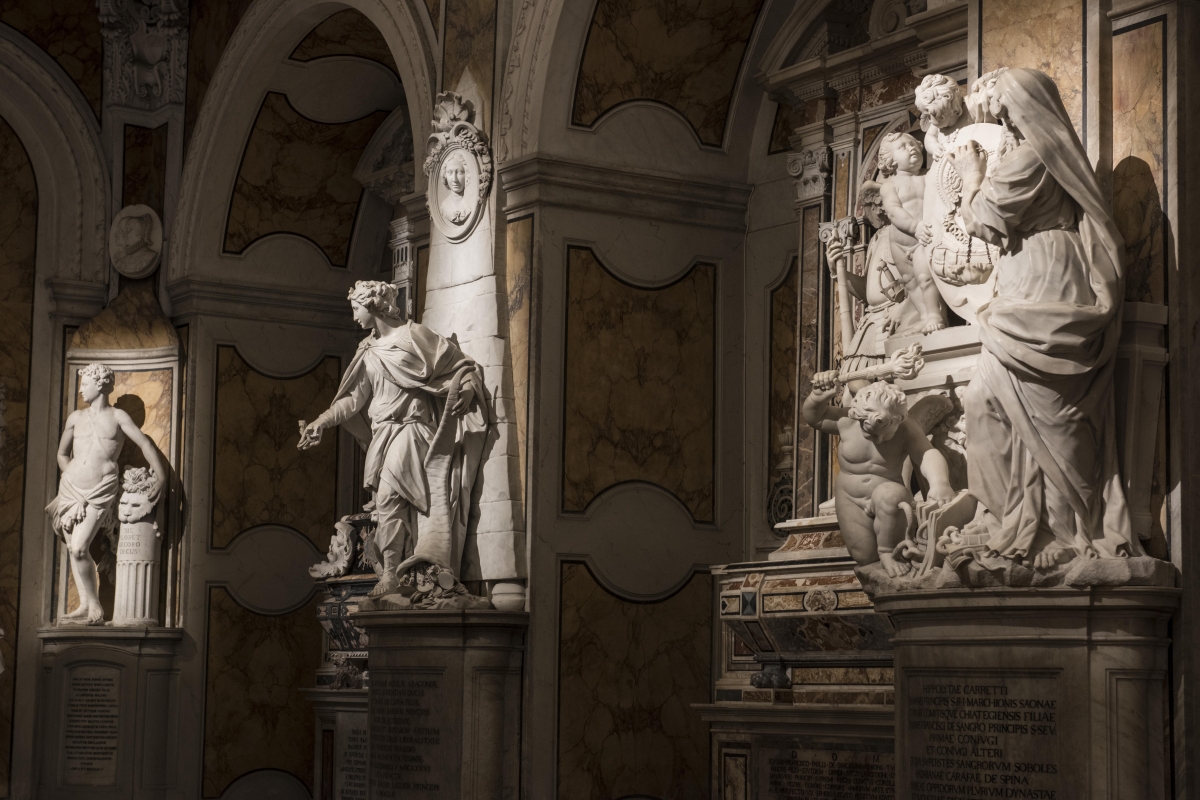 At the centre of the chapel lies Guiseppe’s Sanmartino’s infamous Veiled Christ. By far the most famous work in this chapel full of mystery, Sanmartino’s masterpiece features Christ lying in repose. His face presents a picture of agonised peace as his wounded body is draped with a transparent shroud. 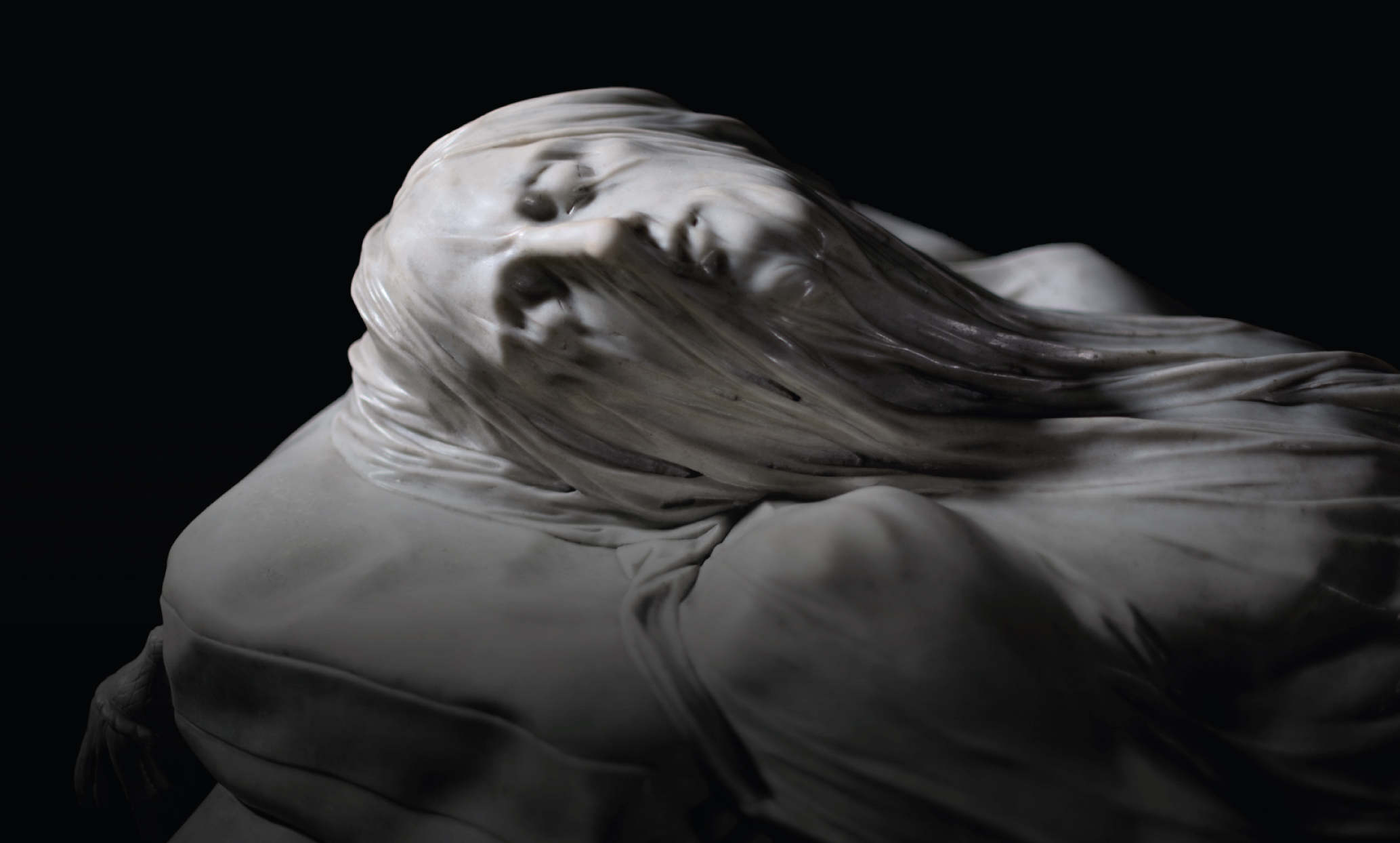 Every feature of Christ’s suffering body is revealed through the veil: the holes in his hands and feet, his sunken, pierced ribs, his veins still full of life-giving blood. By his body lies the instruments of passion, also carved from marble: the cruel thorns and twisted nails, and the pliers used to remove them from his flesh. It is as if the contours of Christ’s lifeless body are made even more exposed by virtue of being shrouded. 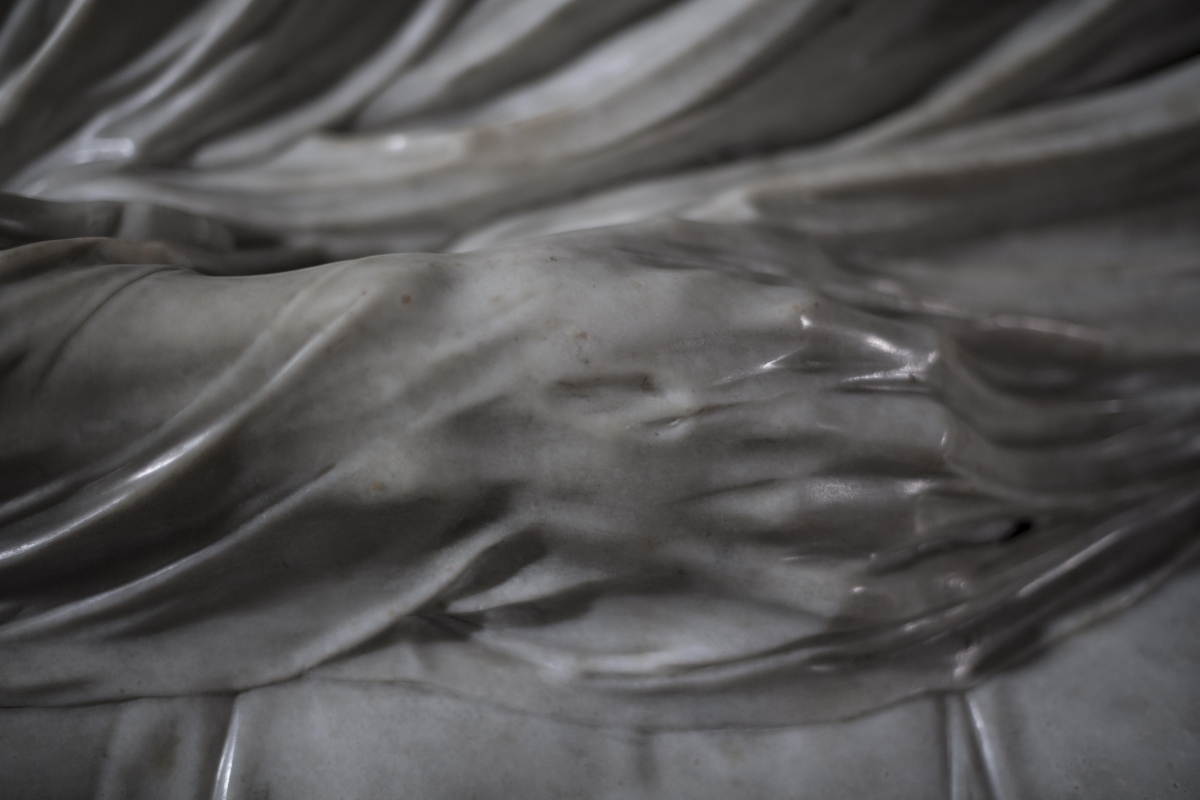 To behold the dignity and vulnerability of this sculpture is an incredibly moving experience. Folklore attributed the marvel of the liquid-like veil to legendary alchemical trickeries. But this is false, and it is only by Sanmartino’s inspired chisel that the Veiled Christ was brought forth from marble. What is and will remain true is the perpetual sense of awe about this sculpture that never dies. 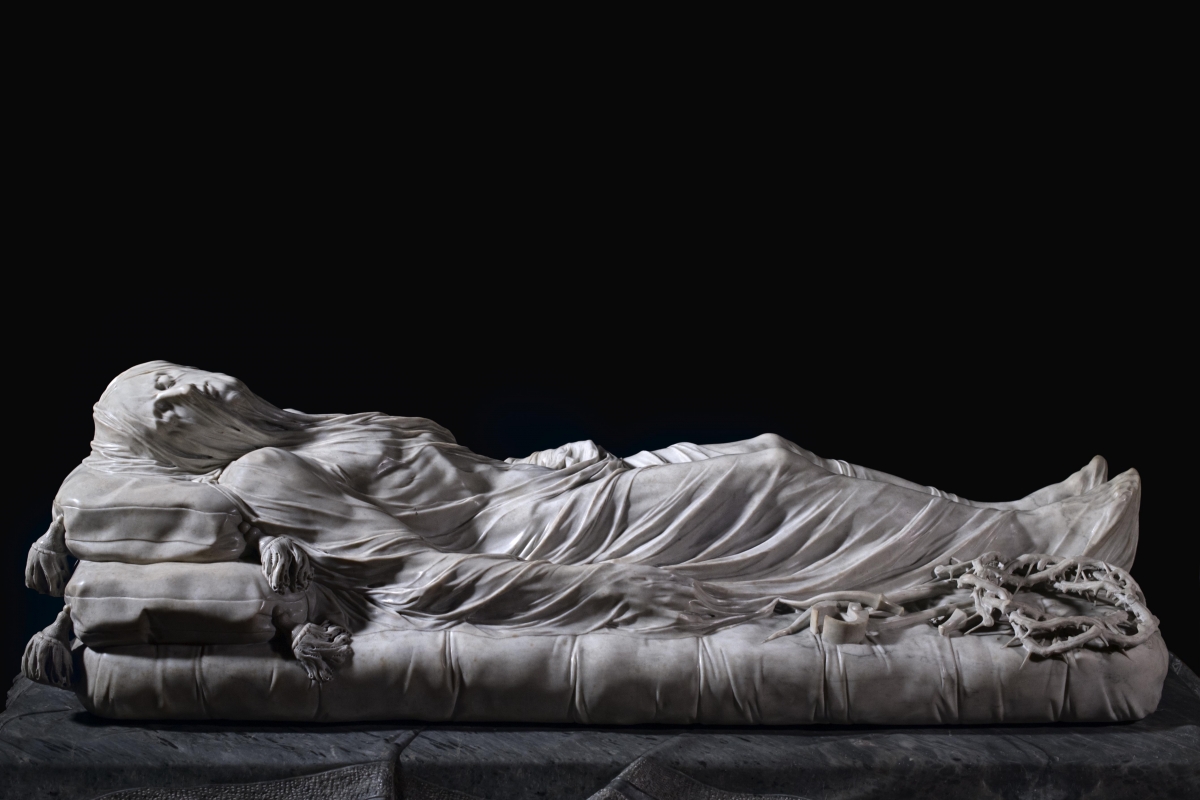 Statues of the Virtues

Surrounding the centrepiece are other intricate sculptures dedicated to the ancestors of the di Sangro family. Different virtues are represented, including Education, Self-control, Liberality, Marital Sweetness, and Modesty, among others. Raimondo di Sangro held unorthodox views regarding ideas on interior knowledge and perfection. These virtues are suppose to symbolise his beliefs on the different stages on the pathway to enlightenment. 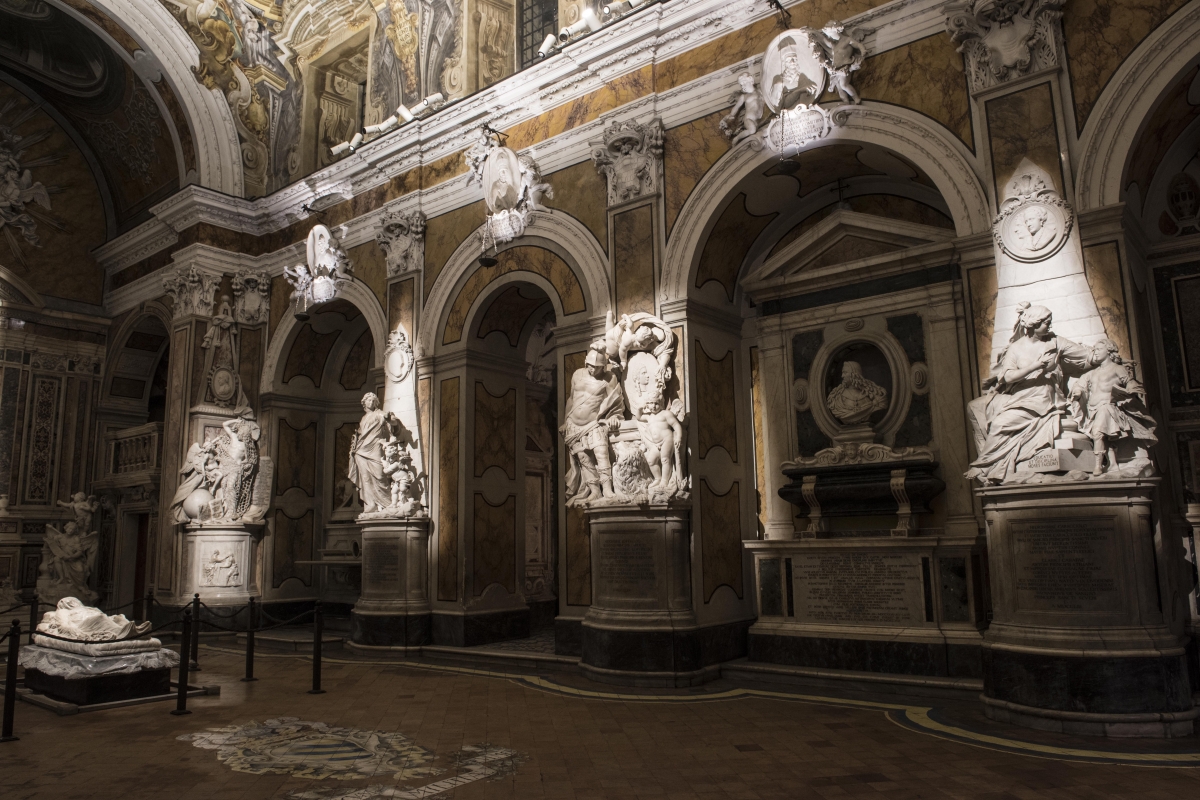 Dedicated to Raimondo di Sangro’s father, Antonio, Francesco Queirolo’s Disillusion depicts a man wrestling free from an entangling net. Many have taken this struggling figure to represent Antonio repenting of his sybaritic ways after leading a pandemonium lifestyle upon his wife’s death. Pointing at the globe at his feet is a little winged spirit representing human intellect which aids the man in removing the net of worldly entanglements. 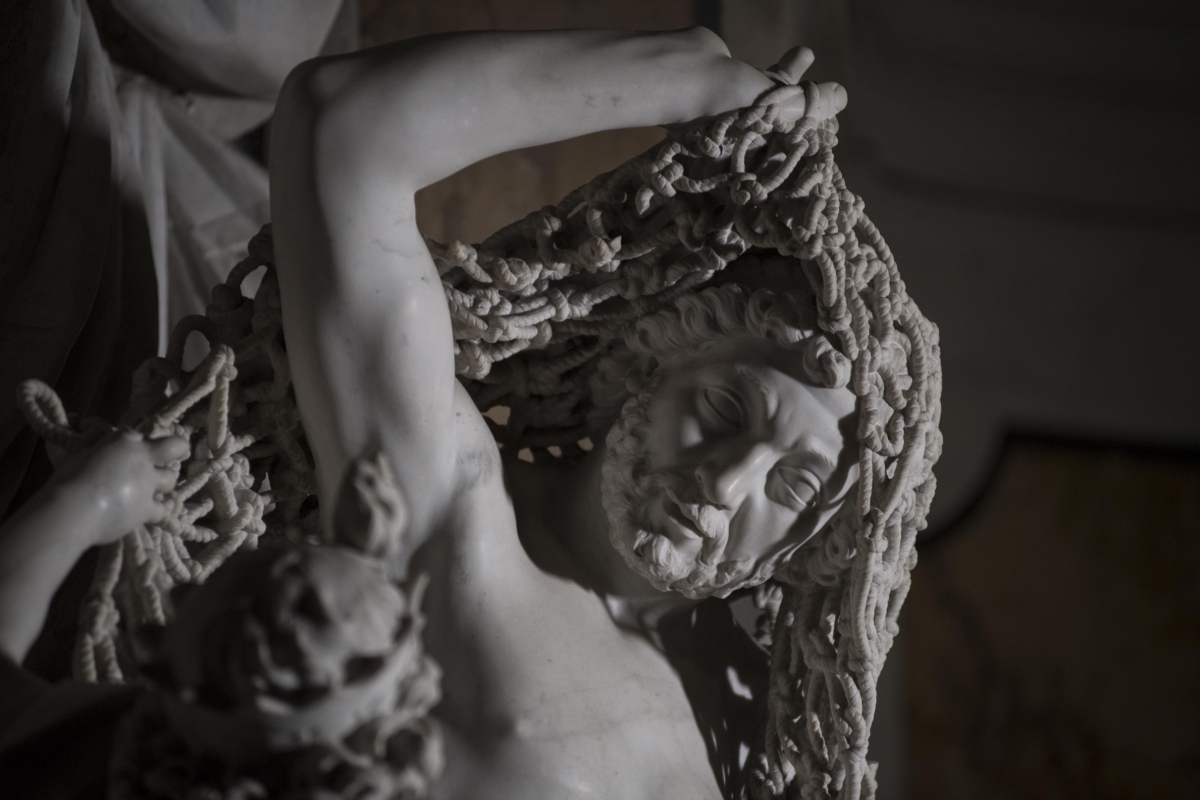 All who walk past this statue are astounded by the intricacy of the netting. Although other skilled craftsmen often aided sculptors in their studios, the creation of this delicate netting was such a marvel that none of Queirolo’s underlings dared lay their hands on it lest it shattered under their tools. Every detail is painstakingly the work of a single masterful hand. 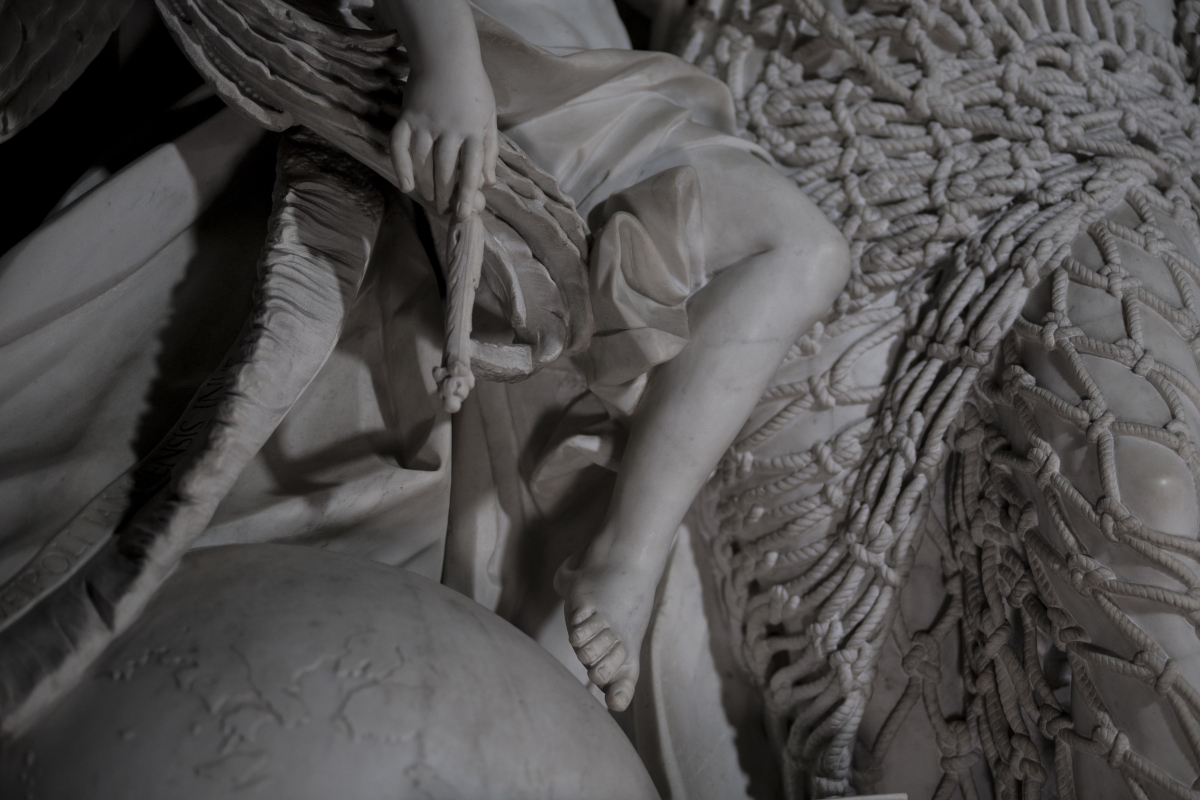 The illusionistic fresco decorating the ceiling of the Museo Cappella Sansevero was one of the first works of art commissioned by the Prince. Completed by Francesco Maria Russo in 1749, this fresco known as the Glory of Heaven boasts a colourful conglomeration of angels and beings converging at the centre. The striking colours are something of a marvel in themselves and remain just as bright as they did in the century of their creation. 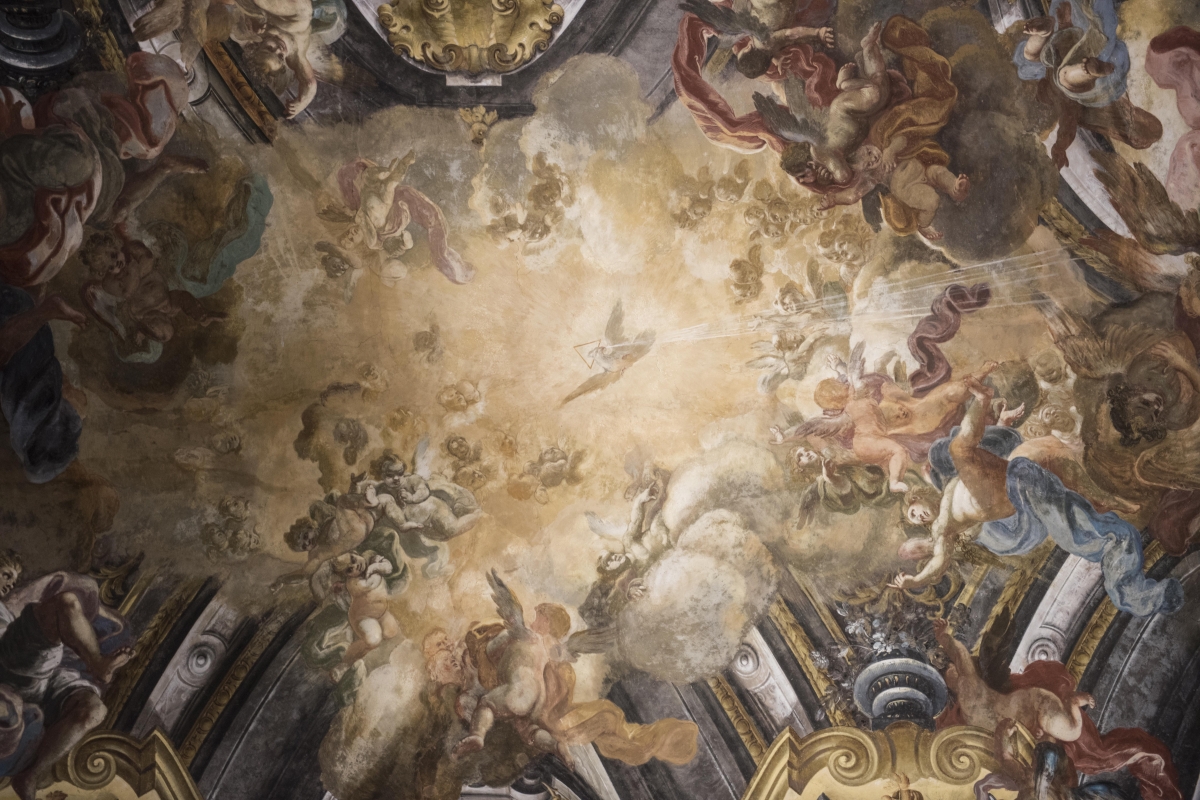 Piercing through the golden centre is a dove (symbolising the Holy Spirit) crowned with a trinitarian halo. Further illuminating this fresco are a series of windows letting in streams of light on both sides of the high ceiling. Ultimately, this fresco did not meet the Prince’s exacting standards, and he requested his son to search for another painter to further perfect and beautify the chapel’s ceiling.

In terms of artistic prowess, the Cappella Sansevero’s Pieta is no great wonder. This piece is attributed to an unknown Neapolitan mannerist. What is perhaps more captivating than the painting is the story behind how it came to be. 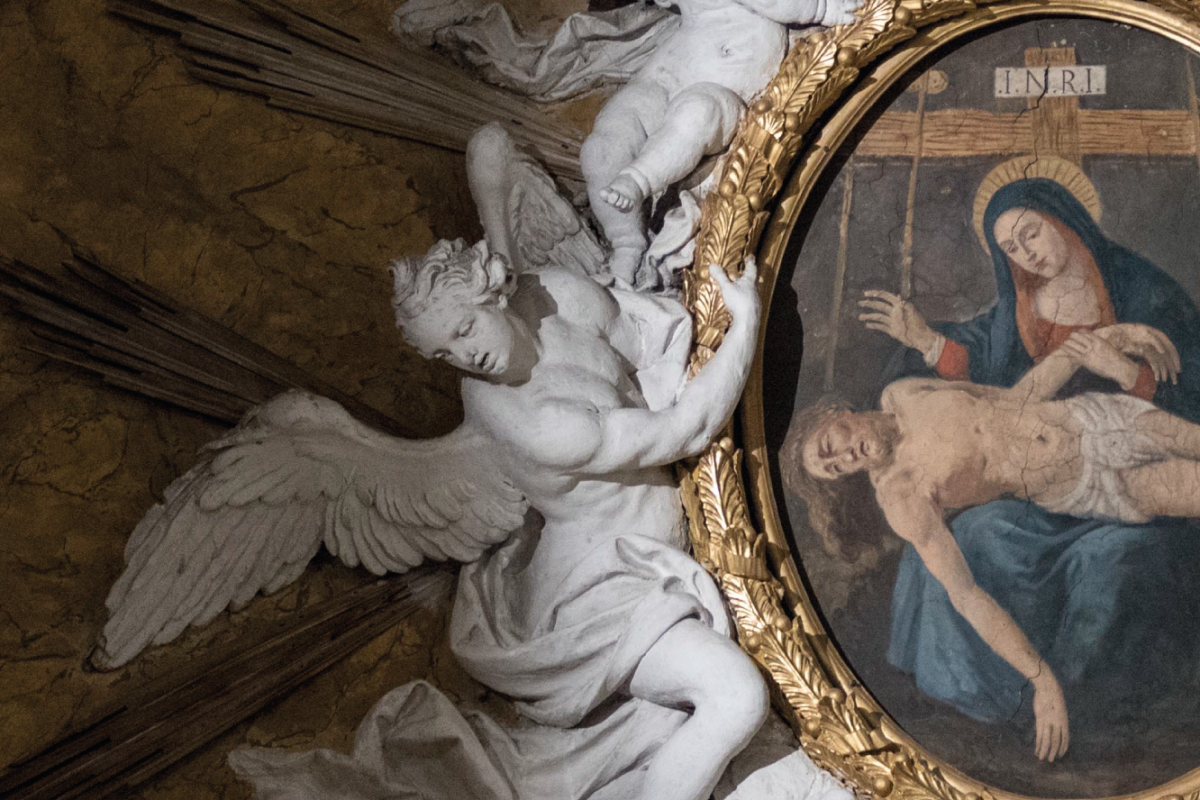 This image was commissioned in the late 16th century by a man unjustly sentenced to prison; however, a miraculous appearance of the Virgin allowed him to re-establish his innocence. In thankfulness to the Virgin, he commissioned this painting as an act of devotion. Soon, pilgrims from far and wide journeyed to pay homage to this image. Giovan Francesco, The Duke of Torremaggiore also had a special devotion to this image, which he claimed cured him of his illness. In thankfulness, he built a chapel in the Virgin’s honour and this chapel would soon become the foundation of the Cappella Sansevero. 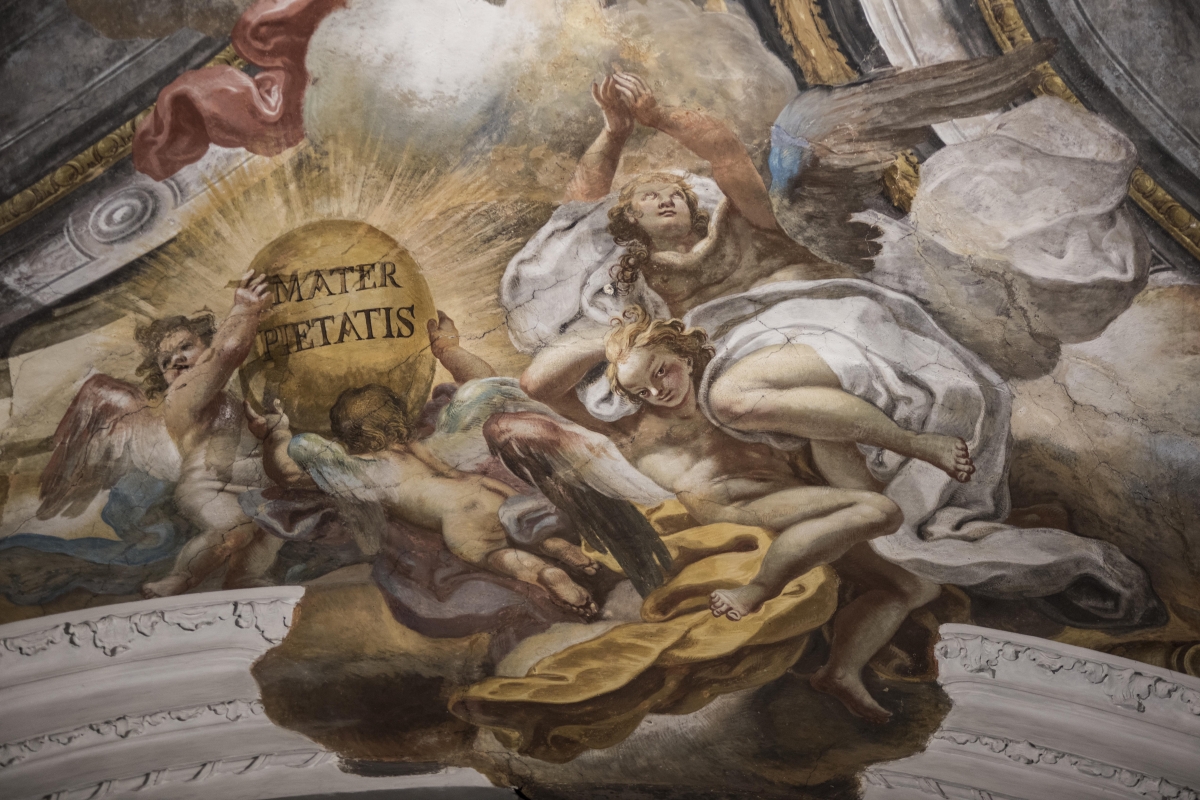 Two bodies in the chapel’s basement will be of particular interest to those interested in anatomy and grizzly urban folklore. Legend has it that Raimondo had two of his servants killed to use as subjects in embalming experiments. The male and pregnant female bodies in the basement are said to belong to those ill-fated servants. 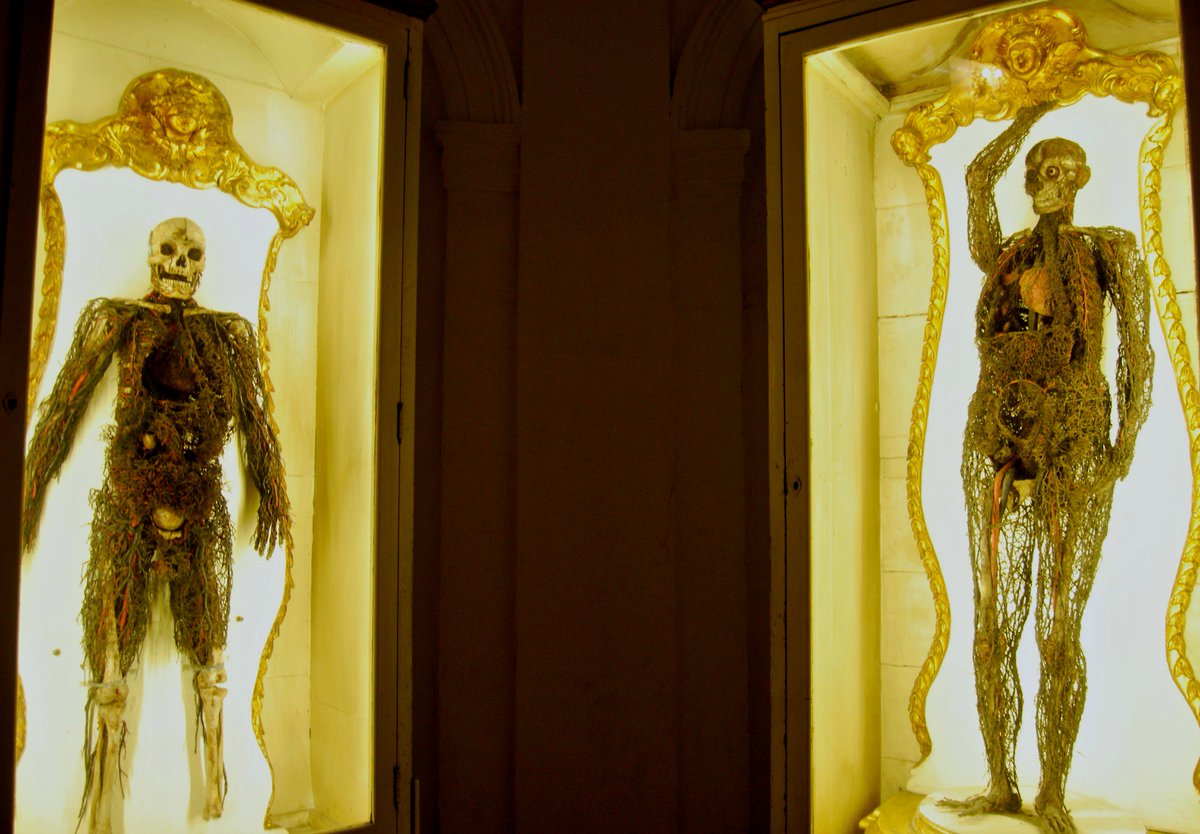 Beyond preserving their skeletons, the Prince had the veins and arteries of his living subjects injected with a hardening substance to preserve their arteriovenous system. However, recent scientific analysis shows no evidence of any such injections taking place. While the skeletons once belonged to human bodies, the “blood vessles” are constructed out of simulated materials like silk, wire and coloured wax. 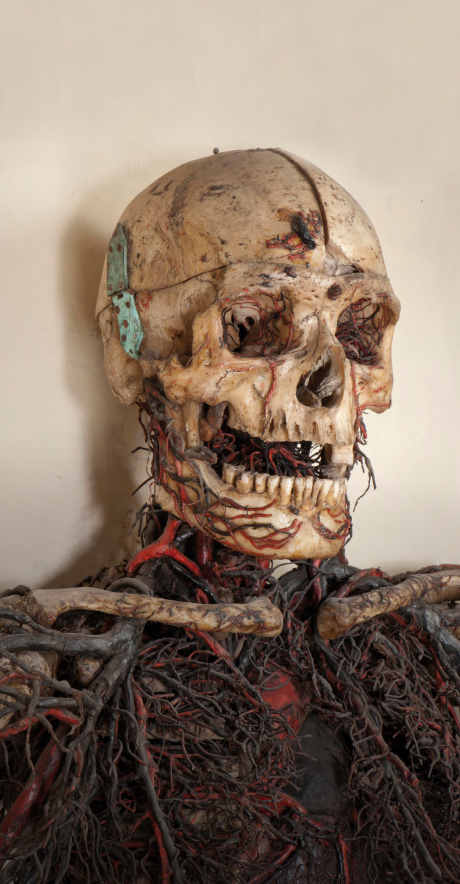 This chapel is above all, a reflection of the enigmatic Prince of Sansevero himself. Only in this space can there be found such a conversion of art and science, patronage and philosophy and religious traditions and cultural trends. If you ever find yourself in Italy, it is well worth it to pay a visit to Naples, if only for this hidden gem of Baroque symbolism and elegance.

Here there are macabre faces that might haunt, and heterodox faces wearing the guise of virtues, but also here, and also hidden can be found the face of Christ, asleep, in love.

All Images in this post are © Museo Cappella Sansevero, unless stated otherwise