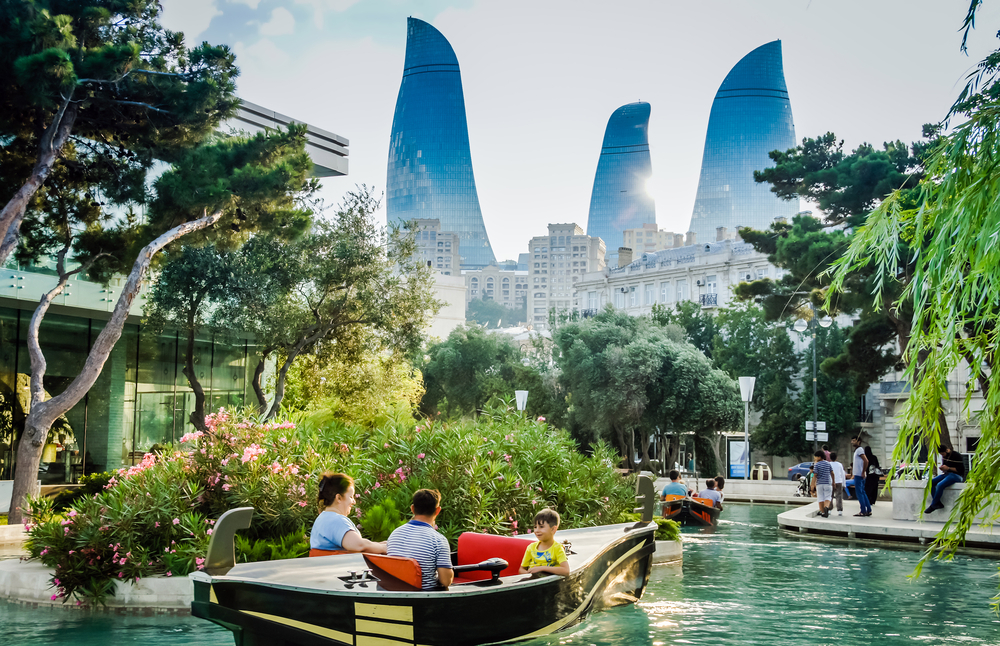 Few People Know About This Former Soviet Country With Cool Architectures, Here’s Why It’s a Rising Destination to Visit Now

Let’s face it, Azerbaijan is not a place that commonly comes up when thinking about places to travel to. In fact, plenty of people probably have not even heard much about it.

However, with stunning cityscapes, exciting retail and food scenes, and rich historical significance, Baku in Azerbaijan is one of the hottest destinations to visit now, thanks in no small part to its post-Soviet era oil boom. 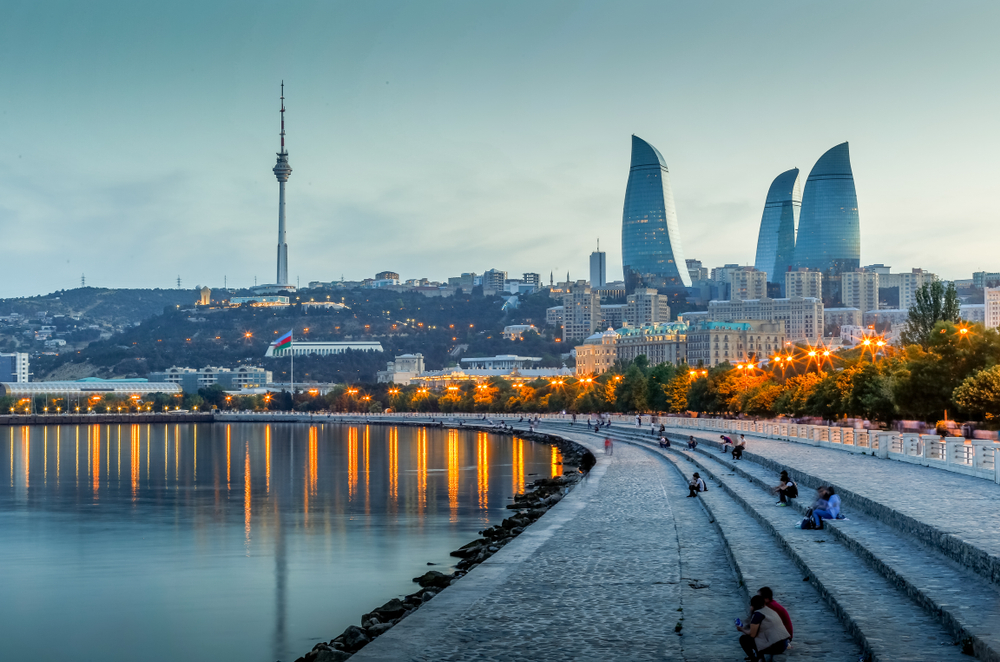 With its futuristic forms in grand scales, characteristic of the designs of the great late-Zaha Hadid, the Heydar Aliyev Center is not only one of the most architecturally significant buildings in Baku, but also in the world.

With such avant-garde forms, comes some impressive functions too. It houses an exhibition hall, an auditorium, and a museum.

A terrific feature of this complex is the ‘Treasures of Azerbaijan,’ which is a permanent exhibition featured in the museum that showcases the history of Azerbaijan and Heydar Aliyev through in an interactive experience.

On the property are also beautifully manicured lawns, making it a perfect place to stroll around.

The iconic Maiden’s tower is the most historic piece of architecture in Baku. While estimates based on the architectural style put it as a 12th-century piece, many still argue over its age, and some even estimate it to be 1000-years-old. Yet, there has been no conclusive evidence on its actual age. 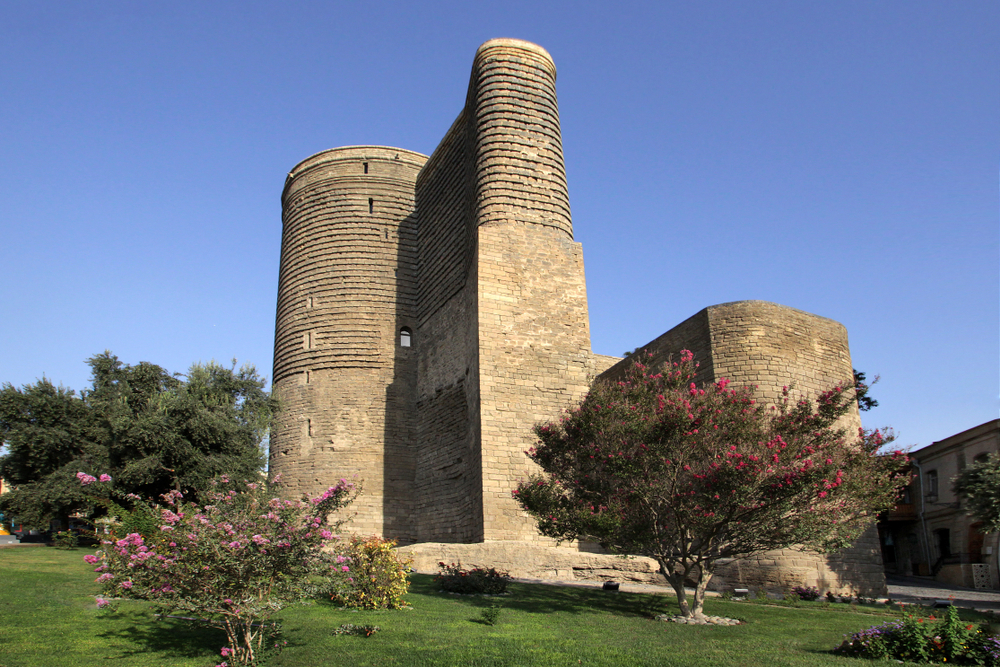 On its rooftop, you’d be able to take in stunning, panoramic views of the Old City as well as Baku Bay. Besides being a terrific vantage point in the city and possessing incredible historical significance, the Maiden’s Tower – or Qız Qalası in its Azerbaijani name – also features multimedia presentations and featurettes about the stories and history of the structure. This public square is one of the most popular gathering spaces in Baku. The fountains square – known as Fəvvarələr meydanı in Azerbaijani – got its name from the many fountains located in the location, built during the time when it was under Soviet rule. 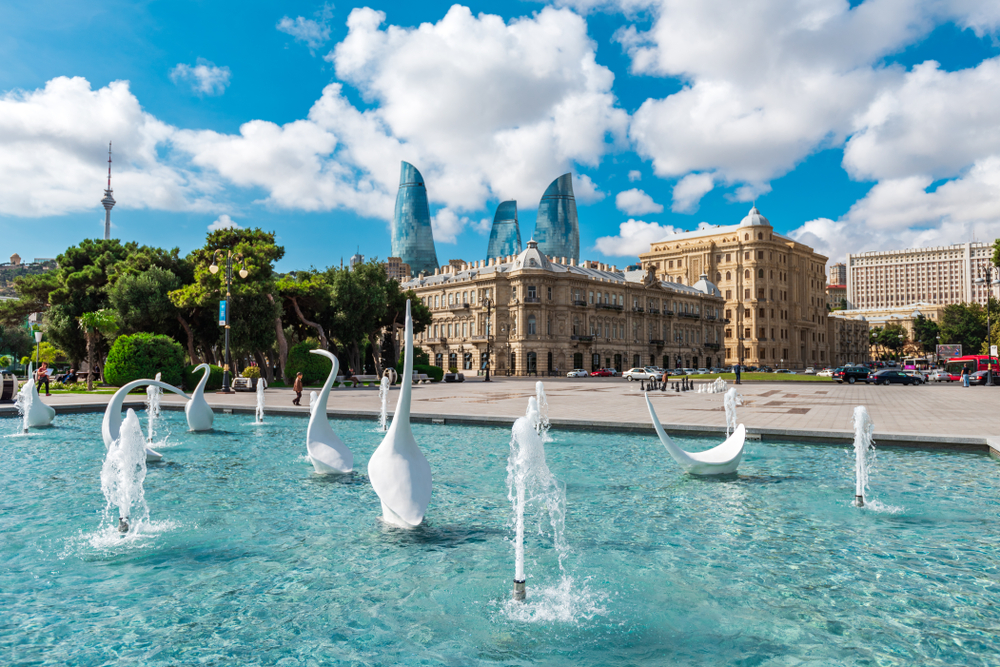 Not just decorative, Fountains Square is also home to many shops – from a shopping mall to cafes and the first McDonald’s in Baku.

With beautiful fountains, leavy walkways, stunning architecture, the fascinating Nizami Literature Museum, and plenty of shopping and dining options, it’s easy to see why it is such a hotspot for both locals and tourists alike. 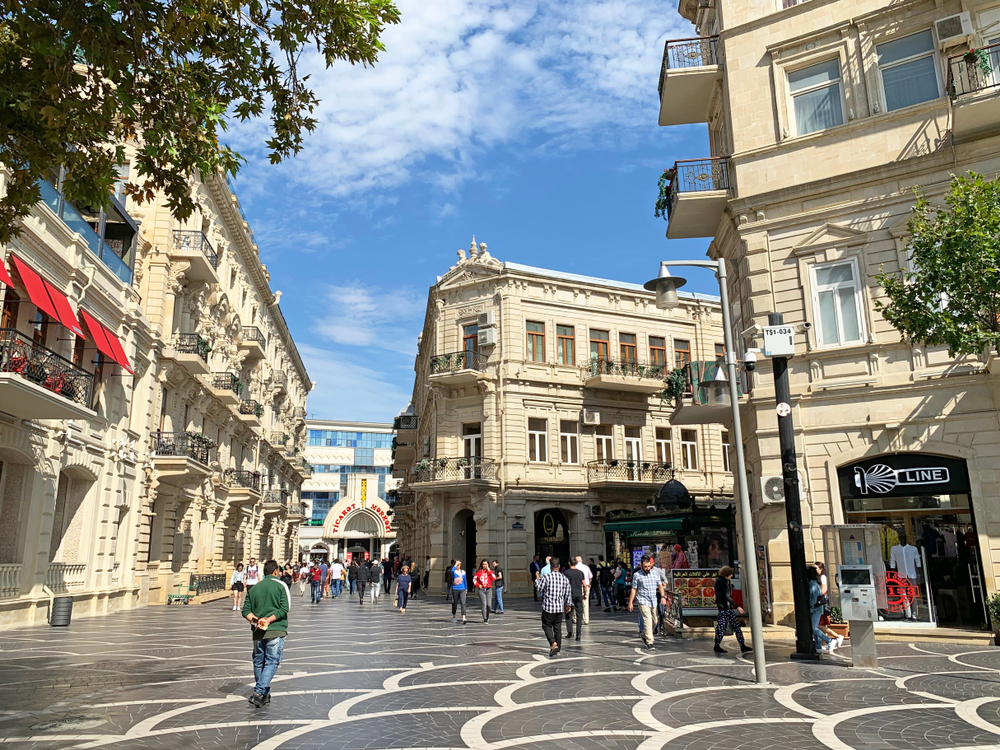 One of the most prominent structures in Baku, the massive, imposing Flame Towers, is an iconic feature of the city that stands flamboyantly and dwarfs the buildings all around it.

The trio of towers housing a Fairmont, apartments, and offices is an unmissable feature when you’re in the city – with its gargantuan size and a stark contrast from its glass facades against the brown, stone buildings surrounding it. 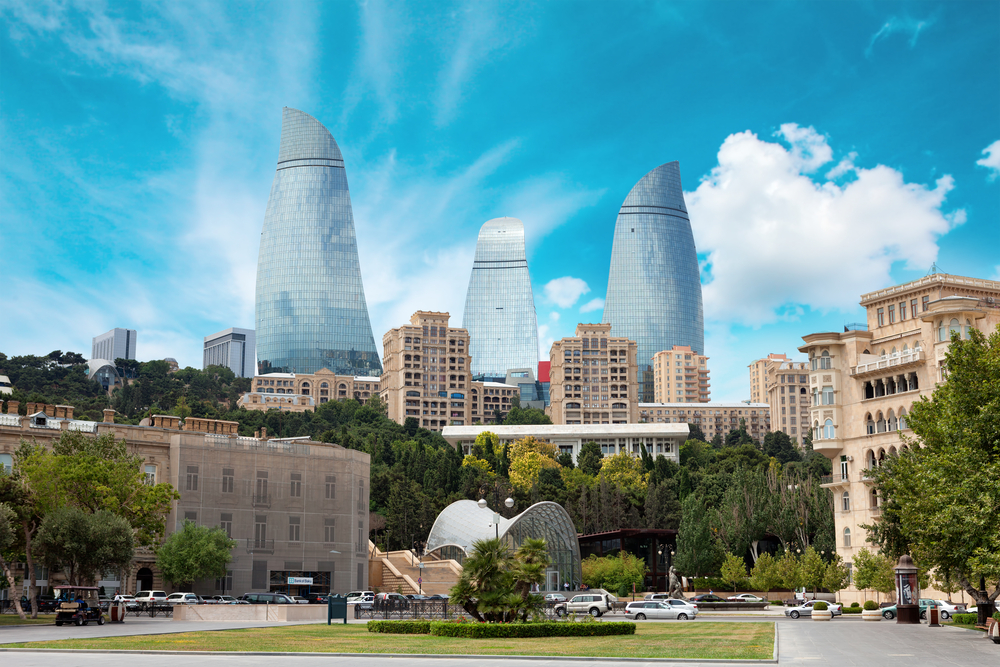 At night, the towers also put on light shows, which features different performance displays such as burning flames, flowing water, as well as the Azerbaijani flag.

One of the great places to take in the views of the Flame Towers, as well as the rest of the city and the Caspian sea, is Baku Boulevard, an idyllic seafront promenade. 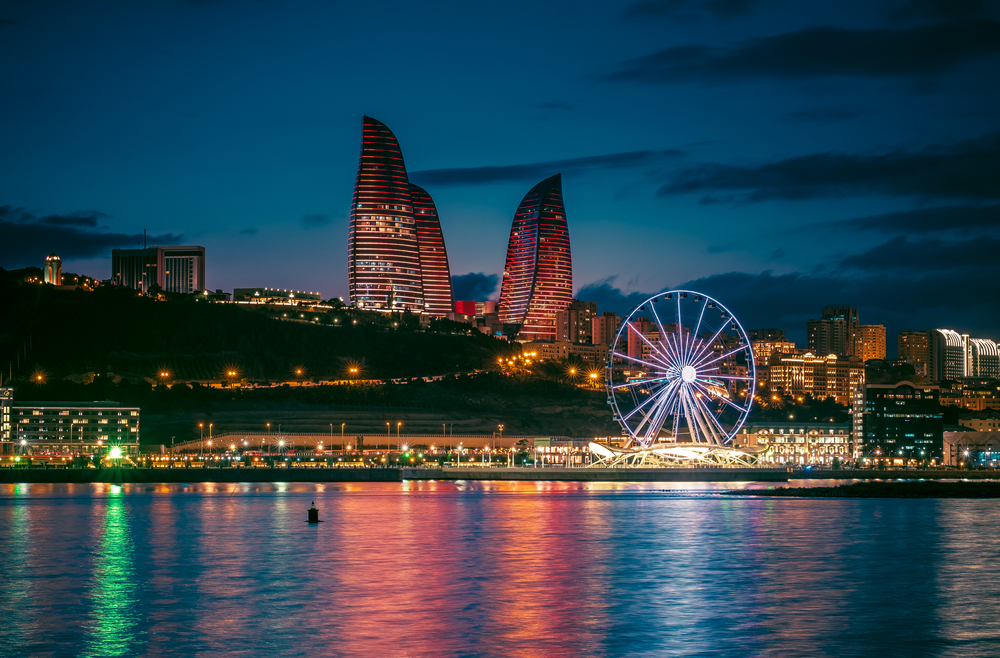 Palace of the Shirvanshahs

As part of the UNESCO World Heritage Site of Historical Monuments, it holds this title jointly with the Maiden Tower as a collective listing.

Described by UNESCO as “one of the pearls of Azerbaijan’s architecture,” the palace was painstakingly restored by 2006 with updated modern features of multimedia displays.

The original complex itself was not built all at once, with additions being made throughout the 15th century.

One of the main attractions of the palace complex is the mausoleum, which features beautiful and elaborate carvings and designs with Muslim iconography on the sandstone structures. 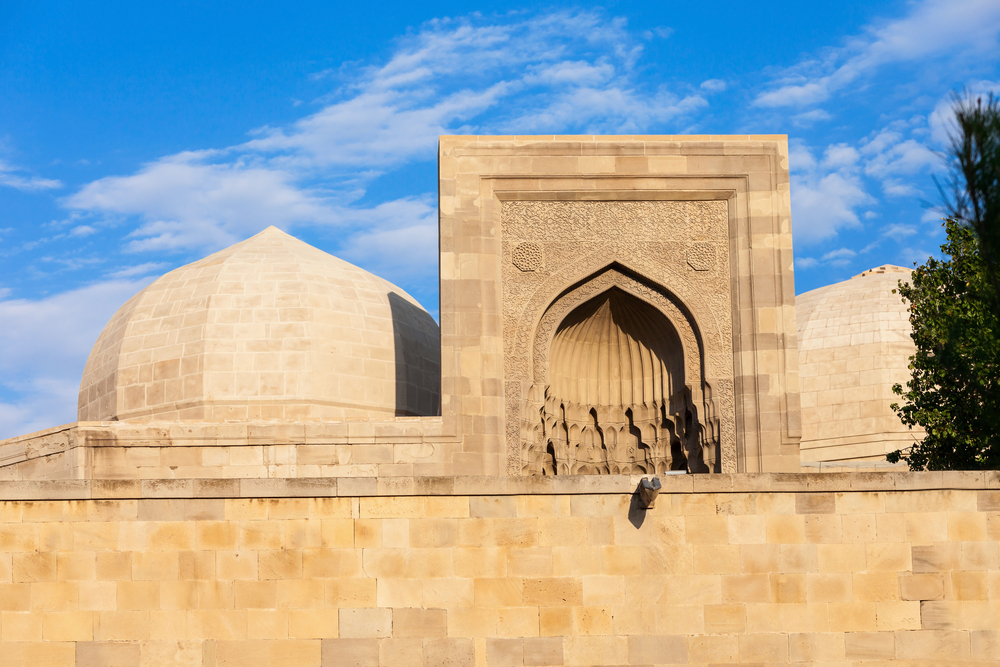 Easily one of the most quirky and outlandish buildings, the Azerbaijan National Carpet Museum is shaped in none other than – you guessed it – a carpet. 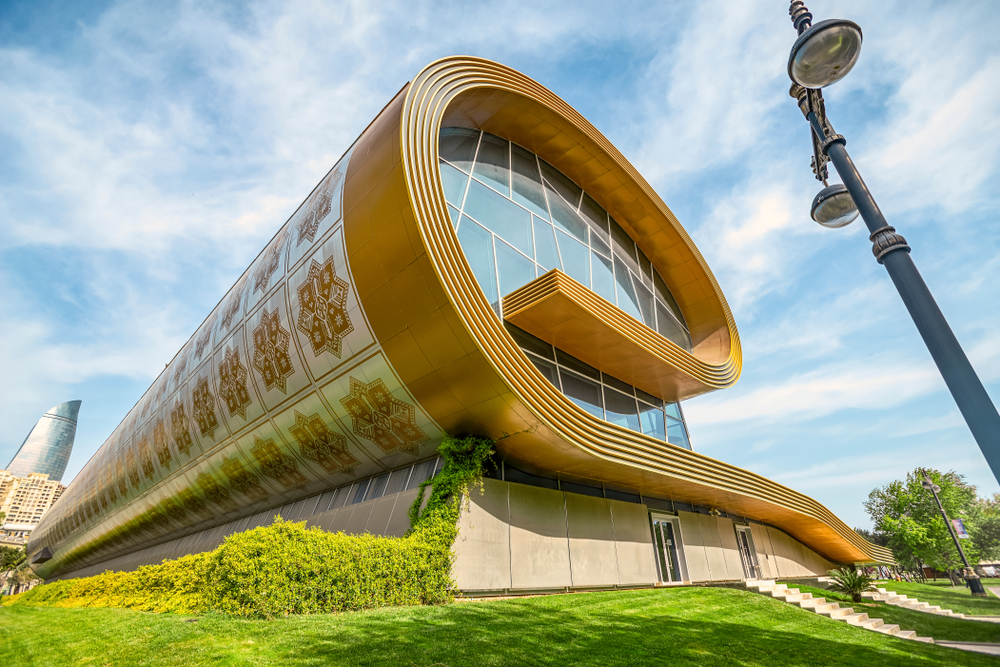 This peculiar structure was not the original site of the museum – that would be the Juma Mosque – but is a purpose-built building on the seafront park. 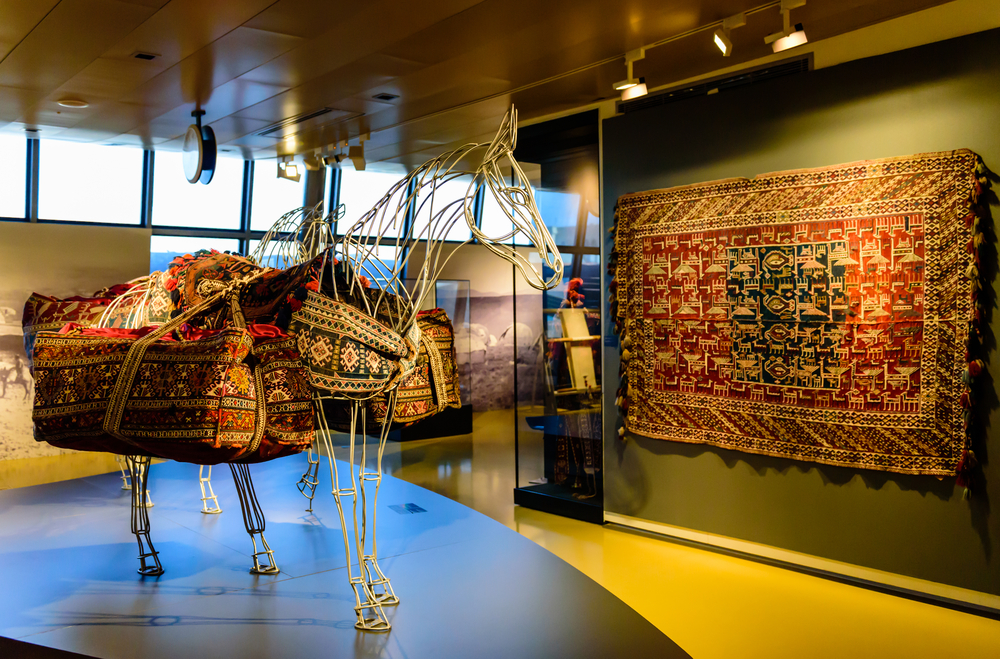 With UNESCO naming Azerbaijani carpets a “Masterpiece of Intangible Heritage” in 2010, the government has fully leaned into that honor, building the new structure to proudly showcase and tell the story of the country’s carpet-making as well as ceramics and jewelry.

On top of displaying pieces of historical and contemporary significance, there is also a carpet shop here and export permit issuance.

Had enough spectacular glass-and-steel buildings? Head away to Binagadi-Balakhany Highway for Mother Nature’s spectacle like no other this side of the world. 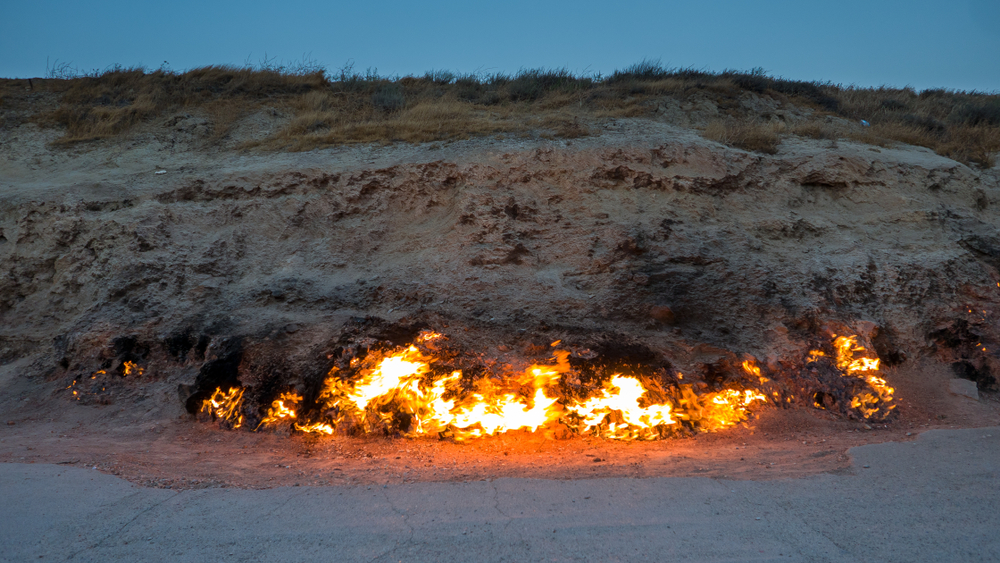 The country’s abundant gas reserve gave birth to a fascinating phenomenon: Yanar Dag, a hillside that’s continuously burning natural fire; locals claimed that the ancient hill has been burning for thousands of years. 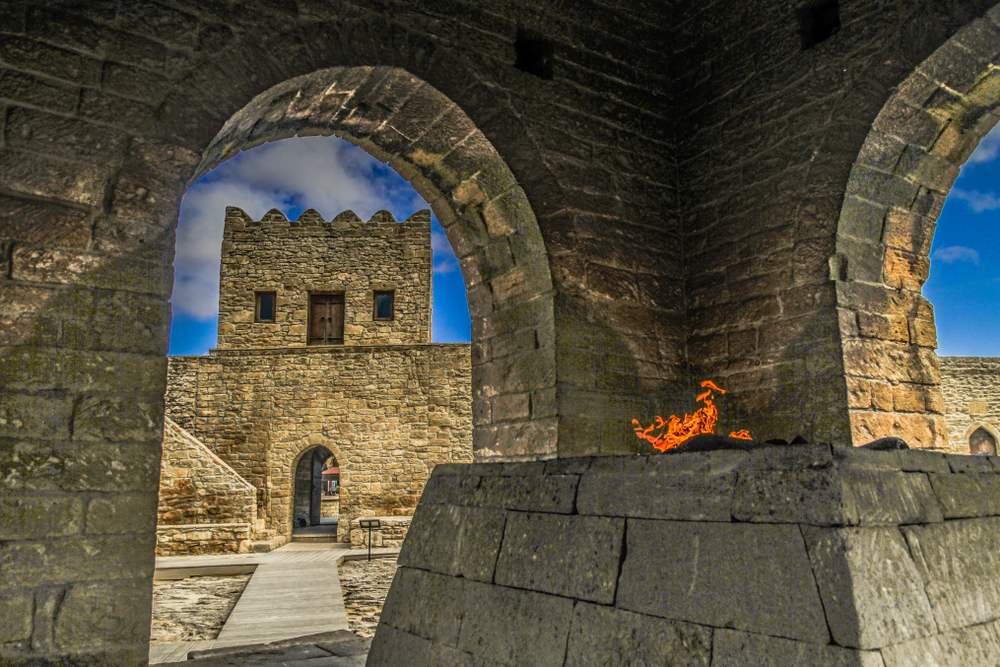 Fire is a highly regarded element in the culture—”The Land of Fire” is the country’s motto—and you’ll also be able to visit Ateshgah fire temple nearby, a significant place of worship for ancient Hindus and Zoroastrians.