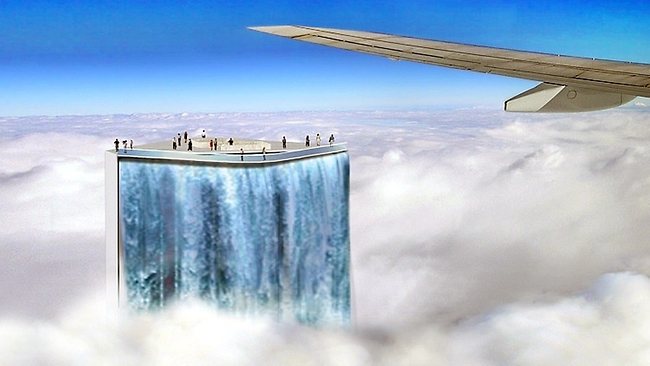 Is it just me or are designers today turning our wildest dreams into a reality? What’s most incredible is that these fantastical like ideas once thought only possible in James Bond style movies are taking shape. Look at Dubai for instance and their plans to create a completely submerged hotel with views of the sparkling underwater world that lies beneath. Quite enchanting.

Today comes news of a design from a Brazilian firm who plan to build an iconic 90 floor high skyscraper featuring a lavish urban waterfall that will solar power Rio de Janeiro’s 2016 Olympic Games. You’ll even be able to bungee from the top from a retractable platform.

The idea is that by day the building’s solar power plant produces energy for the city, and by night, excessive energy will be pumped as seawater into a tower with the water being released, producing energy that can light up the city.

Both a shop and caf© are located beneath the waterfall with an observation deck and urban balcony located at the top of the tower 105 metres above sea level, which provides visitors an opportunity to walk over a glass sky walk with the waterfall streaming below.

The concept by RAFFAA architecture & design is to consider ’how the classic concept of a landmark can be reconsidered’. The company wants Rio de Janeiro to be known as the start point for a global green movement, in the footsteps of hosting the United Nation’s Earth Summit in 1992.

The question has to be asked; what on earth, underneath or above it, might be next?