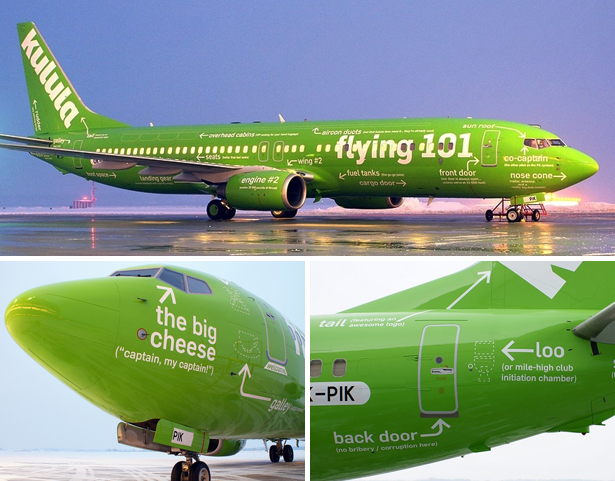 What 10 Airline Liveries Say About Us

Appearance is everything and aircraft are no exception to the rule. Forget Mad Men, flick through a timeline of liveries and they tell us a lot about ourselves. Designs were once extremely corporate and symbols were nationally recognised – what traveller hasn’t felt a pang of patriotism during long journeys when catching a glimpse of your country’s national carrier at a crowded airport in far away countries?

That great big beast of a plane is the perfect medium for flash and creative branding, but not all airlines take full advantage of all that space, while others do it brilliantly and some hover in the realms of what were you thinking. Airline liveries have and do reflect collaborations with everything from film productions, sporting events, tourism hotspots and more recently aviation mergers and acquisitions, using thousands of litres of paint in the process. But mostly they say a lot about our cultural histories and tastes.

Topping our list for creativity is South African’s Kulula Airways, a low cost carrier with a brilliant sense of humour. Their ‘Flying 101’ livery points out the important bits on an aircraft like the front door (this door is always open… unless we’re at 41,000 feet), landing gear (comes standard with supa-fly mags), the co-captain seat (the other pilot on the PA system) and the back door (no bribery or corruption here).

Their cheeky approach makes a splash and they found themselves in a bit of hot water when in 2010 they described themselves as the ‘Unofficial Carrier of the You-Know-What’, referring to the 2010 FIFA World Cup held in South Africa at the time. They then followed up with advertising announcing affordable flights for ‘everybody except Sepp Blatter’, the FIFA president, after having their hands unceremoniously slapped.

Their humour extends in-flight too with reported announcements including – “Your seats cushions can be used for flotation; and in the event of an emergency water landing, please paddle to shore and take them with our compliments“, and upon landing at Durban Airport – “Whoa big fella, WHOA!”.

Kulula Airlines flies with a firm smile on their faces

In 1998 Japan’s All Nippon Airways unveiled the first of its many Pok©mon jets coinciding with the release of Pok©mon: The First Movie. The craze had longevity and the airline reported an increase in ticket sales with passengers enjoying the complete Pok©mon experience which included headrests, flight attendant uniforms and souvenir bags. They continued with new liveries in accord with follow up movie releases. Japan‘s love of anime was further supported by ANA with a Gundam robot suited livery to celebrate its 30th anniversary, and a Woody Woodpecker plane to promote Universal Studios Japan.

Teaming up with the Alaska Seafood Marketing Institute in 2012, Alaska Airlines sent a fish flying with a wild Alaska king salmon intricately painted right down to the scales on its 737-400 and 737-800 aircraft. The carrier helps to transport one of the state’s most treasured commodities to appreciative dinner plates across the world. Ironically back in 1987 the airline was the victim of a mid-air collision with a fish following take off in Alaska when a giant bald eagle saw the aircraft approaching and dropped it’s breakfast at 400 feet hitting a cockpit window. The bird escaped injury and the cockpit window was marked only with a greasy spot and some fish scales, although it’s believed that particular fish’s maiden flight was its last.

Promoting one of Alaska’s most treasured natural inhabitants

As American Airlines and US Airways work out the finer points of merging into ‘American’, and aviation industry competitive concerns are addressed by regulators, a new look livery was unveiled which has a distinctly ‘Captain America’ feel about it.  And maybe that’s appropriate as the combined forces of both airlines not only saves American Airlines from bankruptcy woes the new airline will be worth around US$11 billion and will be the largest airline in the world. The sleek silver bird retains it’s iconic colours and is flavoured with a space-age edge.

Air Pacific‘s restructure has resulted in the rebranding and acquiring of new widebody aircraft incorporating far more of its national heritage than the previous gold and orange tail. Fiji Airways’ total overhaul is being met with rave reviews from aviation and other media. It’s not only the attractive ‘masi’ Fijian livery that’s the talk of the town, cabin crew get the thumbs up with vibrant turquoise and rich chocolate hued uniforms which is also reflected throughout the interior.  Modern and thoughtfully designed seats such as cloud-comfortable business class seats (don’t you love that description?), new lighting technology that adapts to the time of day and in-flight activity such as meal service and rest, and 110v in-seat power chargers. We agree with Forbes magazine, it is beautiful.

Etihad Airways have been partners with Manchester City Football Club since 2009 launching it’s dedicated ‘Blue Moon Rising’ A330-200 used to fly the team on pre-season tours, the regular Abu Dhabi to Manchester route, and further throughout its vast network. You may wonder why a national UAE airline affiliates itself with an English football club but the truth is that Etihad have consistently aligned themselves with corporate sporting sponsorships around the world for some time. Apart from sponsored liveries the airline has naming rights for the Manchester FC home ground (Etihad Stadium), Melbourne’s former Docklands Stadium was also renamed Etihad Stadium and one of Australia’s major sporting grounds, title sponsors for the Abu Dhabi Grand Prix, Scuderia Ferrari Formula 1 teams, even the main sponsor of the All-Ireland Senior Hurling Championship. Forget tradition this airline promotes the high flying lifestyle of the wealthy, expensive toys and the passionate sporting pursuits that go with it.

It’s no secret that KPOP is bigger than the big blue sky, hence it’s also no surprise that Korea’s Jeju Air adorned their aircraft with one of their idol groups which also doubled as their Asian tour bus/plane during 2012. Big Bang are one of the country’s most popular groups and the airline launched a supporting advertising campaign, along with some extremely popular and sought-after collectible Big Bang model planes.

One of the campaign ads we couldn’t resist throwing in:

In 2011, Germanwings, a low cost subsidiary of Lufthansa, raised eyebrows with their flying bear which represents Germany’s capital city of Berlin. The airline is now undergoing a major restructure by its parent airline with a new liveried fleet with a ‘modern brand identity’. The budget airline will take over some of Lufthansa’s routes from Stuttgart and Hamburg and service the previous Lufthansa destinations of Vienna, Palma de Mallorca and Nuremburg with more announcements to come before concluding the revamp at the end of January 2014.

The iconic flying kangaroo of Qantas fame hasn’t changed a great deal over the decades, although they have in the past promoted Australia’s Aboriginal heritage through the adornment of their fuselage with indigenous art. ‘Wunala Dreaming’ was commissioned in 1994 creating one of the world’s largest pieces of flying art on a Boeing 747-400. Aboriginal Dreamtime legends from the Yanyuwa people in the Gulf of Carpenteria say that spirit ancestors in the form of kangaroos (Wunala) leave their tracks from camps to waterholes leading the way for others to food and water.

Similar to Fiji Airways’ new designs combining the modern with national heritage, Indonesia’s recently launched full-service carrier Batik Air (a subsidiary of Lion Air) and proudly displays its country’s traditional batik motifs with superb style. The bamboo tool which is the backbone of the ‘B’ in the logo is a ‘Tjanting’ used in creating the meticulous patterns that make up batik textiles. Originally the print was only worn by royalty and families of position, representing a family’s geographic identity, and later signifying wishes of good luck and prosperity. Currently only operating domestically the airline plans to use premium full-service Boeing 737-900s on routes from Indonesia to Australia and South-East Asian destinations, including China.

Liveries are fascinating to look back at over the years. Some reflect a few of the world’s more tacky trends, our evolving obsessions with pop culture, contemporary interpretations and revivals of national heritage, but all document a very important piece of aviation marketing which goes way beyond the tail logo. Our tip? The skies are only going to get a lot more interesting, creative and competitive.