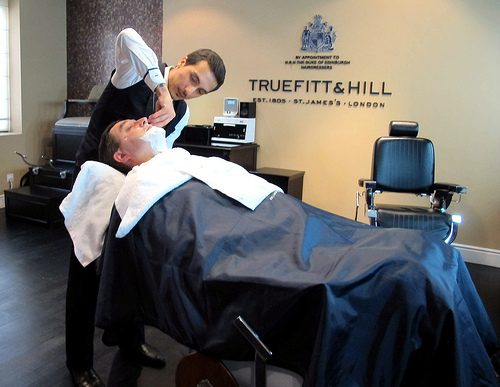 Something Majestic in Kuala Lumpur

I dare not move. My head rests reassuringly against the leather restraint while, out of the corner of my eye, I can see the blade being sharpened to a samurai keenness. Then, with a deftness reserved for practiced executioners, the lethal instrument is applied to my throat and drawn upward in a slick motion that removes only the offending follicles.

But Aras, my expert swordsman, is no Sweeney Todd. There’s no blood, no serenades to homicide. This is an entirely urbane experience and I’m revelling in it.

“I learned my craft in Iran,” confides Aras with textbook-perfect English, “then I worked in London before coming out to Asia – and here I am.”

Aras, the resident barber, is a deft hand with the classic cut-throat razor

The Truefitt & Hill salon under the spa in the newly restored and re-opened Majestic Hotel in Kuala Lumpur is just a part of the total renaissance experience offered at this delightfully retro hotel. Butlers, barbers, barmen and chauffeurs make up the complement of staff at your beck-and-call when staying in one of the 47 classic colonial-style suites in the ’Majestic Wing’.

But the reborn hotel is not just about nostalgia and pre-war throwbacks to empire. It’s a clever mix of old and new, with 300 modern rooms in a totally new-build section, The Tower Wing, which looms above the august whitewashed walls of the original structure that first opened its doors on the 15th of August 1932.

Supervising the renovation of the old building was a labour of love for architect Zaidan Tahir, a graduate of Texas Tech University, who was tasked by YTL Hotels to bring it back to its former glory. Tahir has worked with YTL on other restoration projects in the Cameron Highlands and Malacca. Coincidently, Tahir had fond memories of this iconic landmark from his college days when it housed the National Art Gallery.

The hotel sometime in the late 1970s and in decline

“I enjoyed walking around appreciating the small details of the building, its style and architecture,” he said, “we wanted to maintain the look and feel of the place, at the same time, give it a new life.”

The hybrid neo-classical/art deco Majestic has been through several incarnations in its 80 years, not all of them happy.

In its heyday during the 1930s, the hotel catered to European guests and local well-to-do with traditions like the ’Tea Dance’ and ’Dinner Dance’. Even the rooftop garden had a dance floor with seating for 350 guests. Modern inclusions such as hot and cold water, showers and full sanitation were firsts for the fledgling Malayan hospitality industry.

But like so much of Southeast Asia, World War II changed everything. The grand hotels like Hong Kong’s Peninsula and Singapore’s Raffles were all commandeered by the Japanese conquerors as military headquarters. So too The Majestic and it housed the Imperial Army until war’s end. Room 48 is said to be haunted by the ghost of Japanese officer who committed ritual suicide upon learning of Japan’s surrender.

In 1945, The Majestic resumed duties as a lavish hotel, but struggled to reclaim its place as KL’s pinnacle of style and grandeur. But perhaps it was the fact that the rooftop bar was used by the founders of UMNO to plan their independence from Great Britain that assisted its preservation. By 1957, when the newly independent Malaysia came into being, The Majestic was past its prime and falling into disrepair. In 1977, it was almost lost for all time when a 22-storey high rise was planned for the site but, to their eternal credit, the government stepped in and acquired the building in 1983, fixing it with a preservation order.

But by New Year 1983, the last melancholy guests were checking out and The Majestic became the National Art Gallery until 1998. For the next ten years, YTL Hotels negotiated with the government and eventually received approval to redevelop the hotel under strict observance to heritage conditions. A new art gallery was built and The Majestic began its return to glory, reopening in December 2012.

A justifiably proud Tan Sri Dato’ (Dr) Francis Yeoh Sock Ping, managing diretor of the YTL corporation, said at the reopening “It is a great honour to have been given the responsibility of restoring this national heritage to its former glory. We have painstakingly revived the exquisite neoclassical features in the Majestic Wing, the pi¨ce de r©sistance of the hotel. Our efforts have since earned the new Majestic Hotel Kuala Lumpur a coveted listing in The Leading Hotels of the World, the only hotel in Malaysia to have such an illustrious distinction and putting it in the company of hotels such as The Ritz in London and Le Bristol in Paris.”

Today the Majestic Wing is a marvellous tribute to the decadent ’30s lifestyle and the jazz era. A talented jazz band entertains in the lobby, their swinging tunes entertaining guests all the way from the Tea Lounge, past the bar and into the Colonial Caf©, where sumptuous high teas are served.

Barman ‘Johnny’ Yap is every bit the quitessential cocktail master

Near the original, hilltop entrance is the Majestic Spa, beneath which Aras and his gentleman’s sanctuary reside. In The Bar, you’ll find Johnny, a true barman’s barman. He knows every cocktail ever devised and can match you to one of his titillating concoctions in a blink. Mine is a whiskey sour, “classic and reliable”, Johnny tells me and I’m not about to correct him. Gentlemen may partake in cigars while playing billiards and sipping fine single malts. The only concession to contemporary values being they may now do so in the company of ladies.

Before I turn in for the night, I put my shoes out for a polish, hang a shirt to be pressed and send my breakfast order down to Lynn, the impeccably stylish assistant manager, who supervises all aspects of the Majestic Wing. I could have my butler run a bath or turn my quilt should I desire it, but I’m content with a wake-up call and English breakfast in my adjoining parlour before tackling the rigours of KL’s retail domain. And that reminds me, I’ll need a chauffer for that.