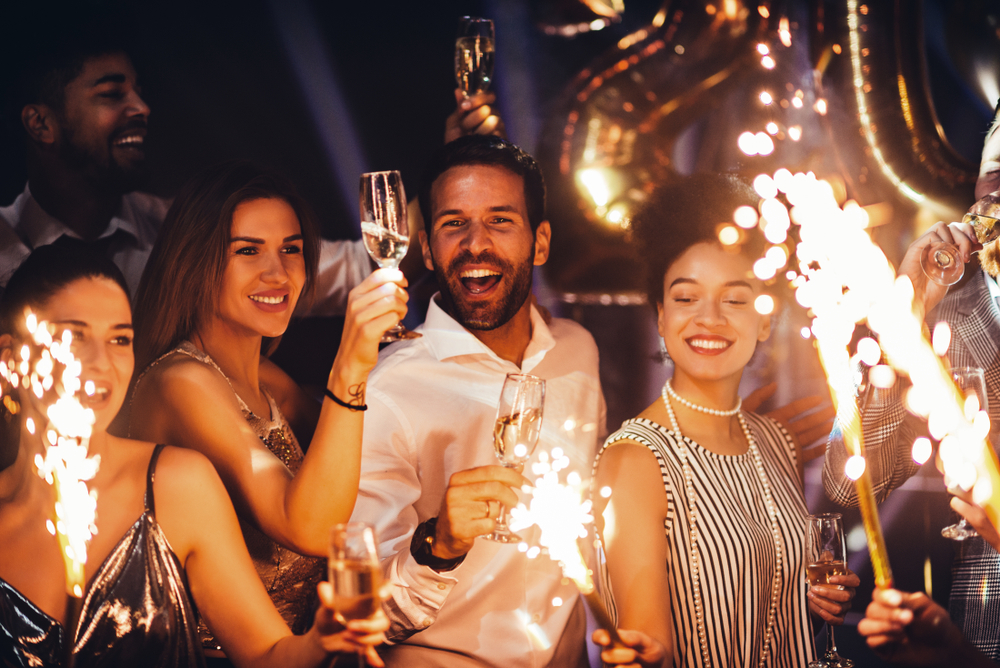 Having just ushered in the New Year and people starting to try to set out their New Year’s resolutions, we take a look at some interesting traditions people do around the world when the New Year comes to usher in good tidings for the coming year.

A rather peculiar sight you night see during the New Year’s period in Columbia would be throngs of people walking around their blocks with empty suitcases.

They believe that doing so would usher in more abundant travels in the coming year, and who could say no to more holidays?

As the clock strikes 12, the people in Spain have a tradition whereby they eat 12 grapes. They believe that each grape they would eat would bring about good luck and fortunes for each month of the upcoming year.

This tradition turns into a sort of communal activity in the bigger cities of Spain like Madrid and Barcelona, where people would congregate in public squares to eat grapes and share bottles of cava.

Fellow oenophiles might snub their noses at this one – in greater Russia, some have a tradition where they write their wishes down on a piece of paper, burn it, and toss it into a glass of champagne (or sparkling wine).

While it may sound like a waste of perfectly good champagne and perhaps not the healthiest thing to drink ashes, but if my wish is guaranteed, sign me up!

In Turkey, as the new year comes about, you might see people opening their doors and sprinkling salt all over the doorsteps of their homes and businesses.

It might sound like a ton of work to get it cleaned up the next day, but the Turkish people believe that doing so would bring about peace and prosperity to the home or business. A little cleanup for a year of good fortune sounds like a good deal to me.

Another messy doorstep tradition takes place in Denmark. The Danish people would round up all their unused or damaged dishes and then bring them around their friends’ and families’ homes to smash at their doorsteps.

The more broken dishes on the doorstep would mean more luck for the upcoming year, and also how popular (or unpopular) you’ve been.

In the Netherlands, some parts of the country are known to gather together to burn large bonfires of Christmas trees and are known as vreugdevuren.

The only reason only some parts still participate in this is due to governmental regulations and to maintain safety for the locals. However, this tradition is thought to bring about good fortune for the local town.

Along with the people of many other South American countries such as Ecuador, Argentina, and Bolivia, the Brazilians believe that wearing certain colored underwear would bring about good tidings for the coming year.

In Greece, families would hang an onion on New Year’s Eve at the front door of their homes, which is believed by the Greeks to symbolize rebirth.

This takes a quirkier turn in the morning, where parents would then remove the onion and use it to tap on their children’s heads to wake them up the next morning.

In a rather elaborate and potentially hazardous tradition, the Finns attempt to prophesied the coming year by pouring molten tin into a container of water.

The shape the casted tin turns out to be would signify what to expect, with a heart meaning a marriage, and a ship representing travels, for example.

In Scotland, people celebrate New Year’s as Hogmanay, and there is a custom known as ‘first footing.’ If the first guest brings a gift of coal, it’s believed to bring good luck.

Better luck if the guests is a dark-haired individual. On the contrary, if the person is light-haired, its thought to bring about misfortune.

Thailand’s official New Year celebrations only come about in April, with a festival known as Songkran. This bustling festival sees water fights taking place all over the country, and many foreign tourists visit Bangkok during this time to take part in the festivities.

With buckets of water and loaded water guns filling the streets, you’re bound to have a splashing good time, especially with the many, many parties taking place all over the city.